epa06921810 South African women protest against gender abuse in Cape Town, South Africa 01 August 2018. Thousands of women took part in the #totalshutdown womens march against gender abuse across several cities nationwide and called for a shutdown of economic activity across the country. Women in Cape Town marched to parliament to honour the victims of gender based violence and handed over a memorandum to the authorities. EPA-EFE/NIC BOTHMA

The start of Women's Month has been marked by countrywide marches and pickets over violence against women, children and gender non-conforming people.... the message was simple: Enough!

Thousands of women across the country came together and marched under the banner of #TotalShutdown on Wednesday. The shutdown was organised to make a concerted call for an end to gender-based violence and intolerance of the LGBTI community and coincided with the start of women’s month.

“Every week, we receive multiple reports of women, children, and gender non-conforming people who have been brutally murdered, kidnapped, or abused, and there is no sense of urgency from our leaders to find ways in which society can tackle this violence,” the organisers said, according to News24.

Gender non-conforming is a term to describe people who do not conform with the “norm” of what a woman or man should look like.

In Tshwane, where protesters marched to the Union Building, the message was clear – no longer would gender-based violence take place in the shadows, a national and open debate was needed.

Nomasomi Limako, 47, from Johannesburg who said she was a victim of gender-based violence said she came to raise the voice of the disabled and abused women.

“I’m marching for those women who cannot March. Most of us disabled women don’t have a voice, that’s why I want this to stop now. I just hope this day is a new dawn for justice for women in this country,” she said. 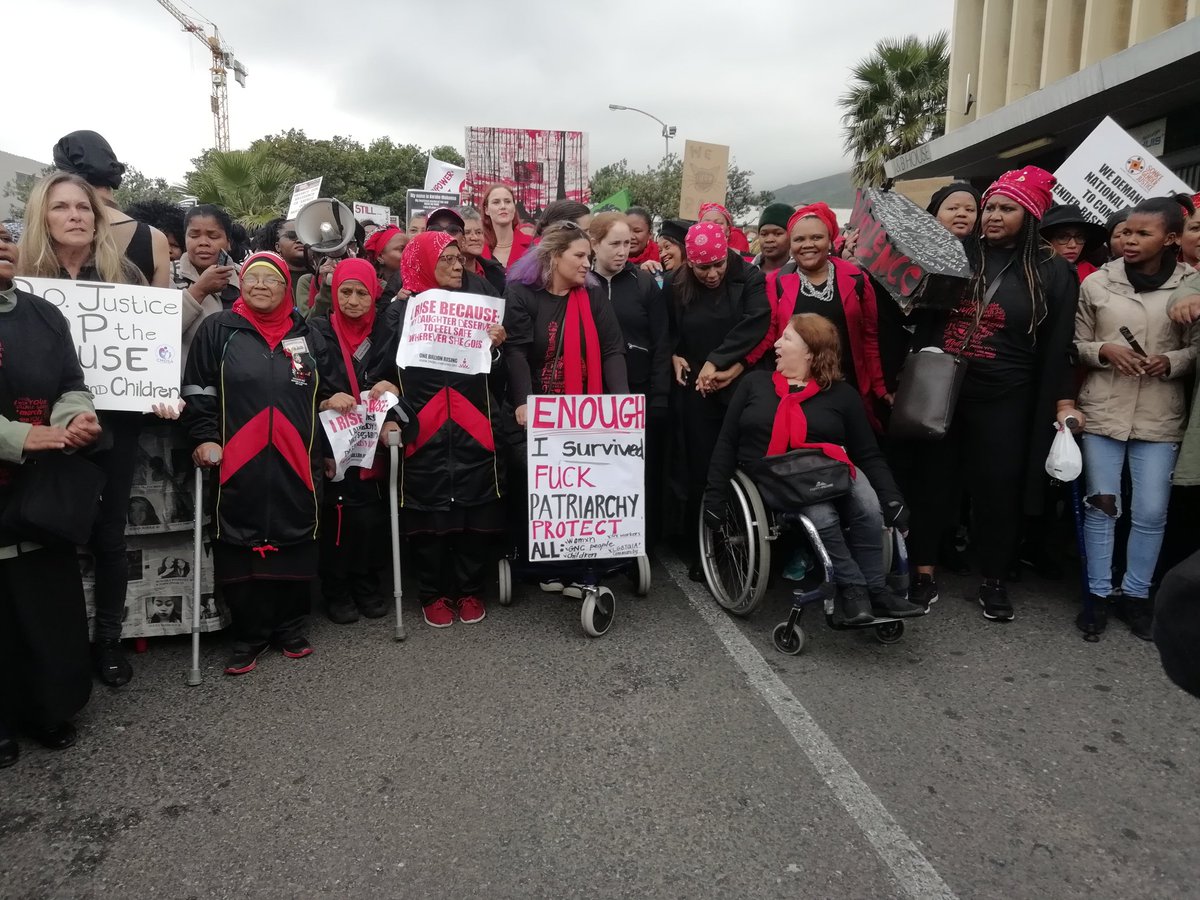 Limako said she had suffered at the hands of her spouse.

Pretoria resident Nkeletseng Tsetsane, 33, said she had been personally affected by gender-based violence, but refused to call herself a victim, rather she was a “survivor”.

“I’m here to register my voice against abuse, trafficking, and all the injustices visited on all women. When women are dying but no one seems to care. They are fighting over land. Who will be the benefactors of the land if we women are killed daily?”

Tsetsane said this was a first step in a series of interventions that would follow. She called on President Cyril Ramaphosa to put together a gender task team to address the challenges of women.

Nelisa Ngqulana, 37, from Johannesburg also said she had personally experienced violence at the hands of the opposite sex.

“I experienced this in the boardroom and had to leave the corporate world because of that. I also worked for a union. I was the only woman there and the environment was very hostile. At one point I was told to stop with the attitude and get on with my work. I’m also a mother of a teenage girl so it was really important that I attend,” she said.

The marchers, made up of mostly young women, put on a united front as they made their way through Pretoria.

At about 1.55pm the crowd settled at the corner of Du Toit and Francis Baard Streets to observe a moment of silence, with raised fists above their heads, for all the women and children who have died as a result of GBV. Many women broke down and cried before the crowd began singing Senzeni Na, which means “what have we done”.

From there the crowd marched on to the Union Buildings where they sought to deliver a memorandum.

Twenty four demands were to be put forward in the memoranda handed over during the various marches.

Thato Mphuthi, 23, from Soweto said she was “angry at the wrath suffered by our sisters at the hands of our own brothers. I believe that women are more than just vaginas. I think a lot will change. If we continue to unite like we did today it might influence the country’s leaders to tighten the laws to protect the interests of women”. 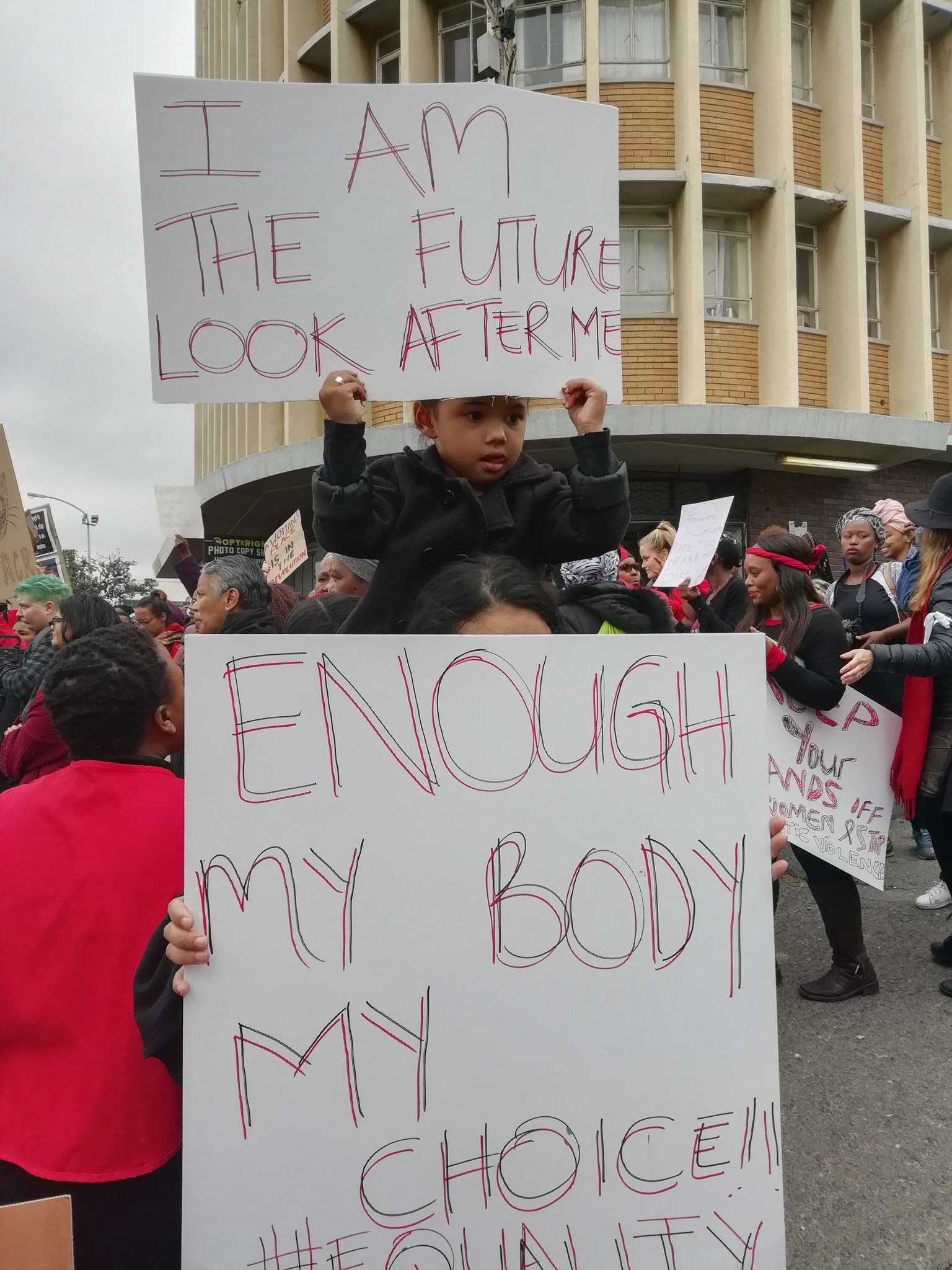 Commenting on the success of the Tshwane march, Loyiso Saliso, a member of the national steering committee member said: “What I’m seeing is amazing. This is history. Today we are standing on the shoulders of the women who came before us. This movement started off with a Facebook status. The law is failing us, the criminal justice is failing us, the government is failing us. We didn’t know each other when we met, but we knew we could (do this).”

Saliso said the movement belonged to every lesbian, every child, every woman.

“Mr President we will not send you. We won’t send another man to teach other men how to treat women,” Saliso said, adding that leaders were only concerned about votes.

Saliso said what took precedence in the President’s schedule was Chinese and investments.

Added Saliso: “We see you Mr Thuma Mina. The elections are almost here. We are keeping receipts.”

Similar marches took place in all nine provinces and in Lesotho and Namibia. DM