‘We’ve won!’ – say both the opposition MDC and ruling Zanu-PF 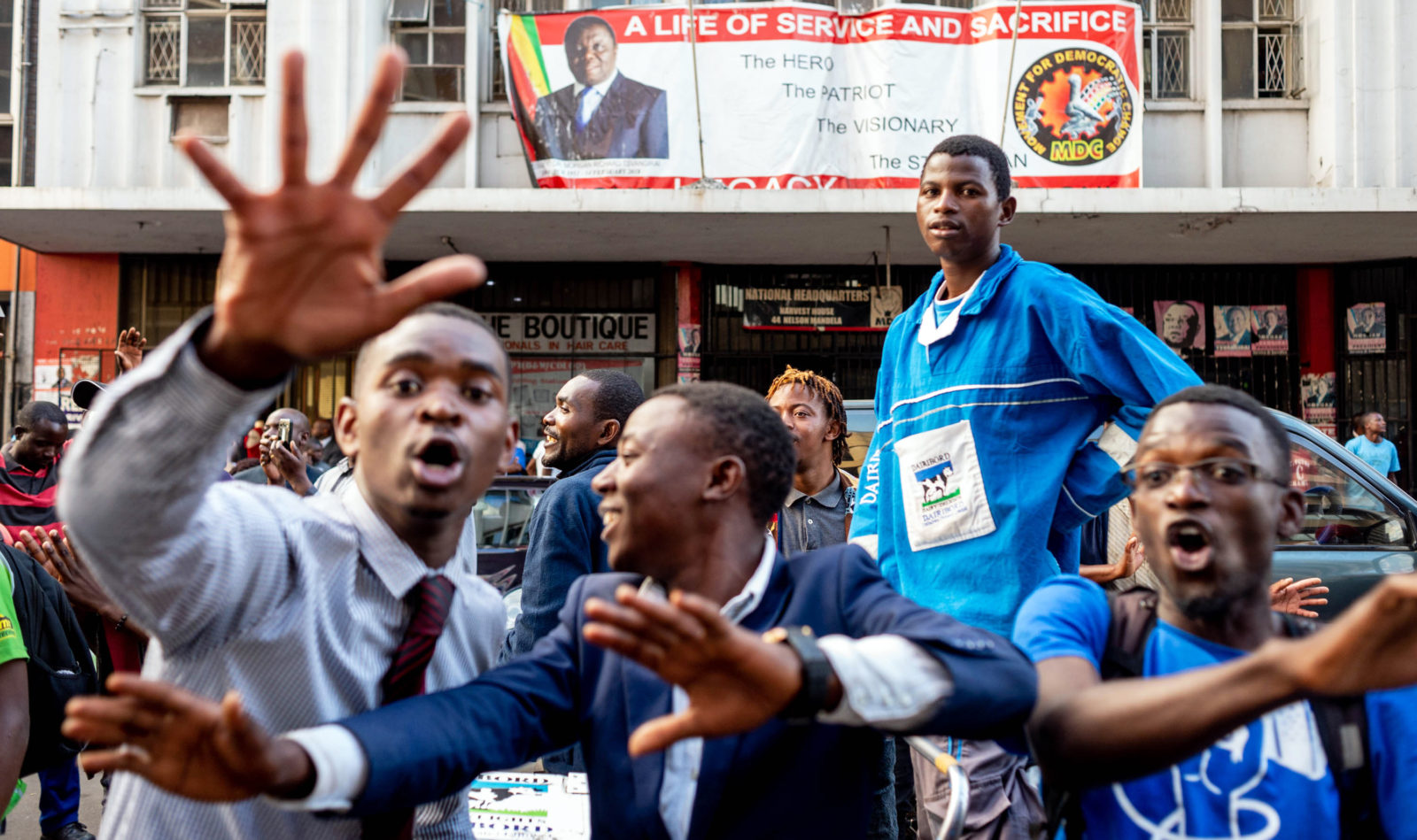 MDC Alliance supporters cheer outside the MDC headquarters in Harare, Zimbabwe, 31 July 2018. Zimbabweans anxiously wait for an announcement from the country’s Electoral Commission as already misinformation and rumours about the results have spread. EPA-EFE/YESHIEL PANCHIA

The morning after Zimbabwe’s much-anticipated election-without-Mugabe (sort of) was a damp squib. Both the ruling Zanu-PF and opposition MDC Alliance claimed victory, as the official results trickled in way too slowly.

Life slowly returned to normal on Harare’s streets on Tuesday morning while, around the country, the Zimbabwe Electoral Commission (ZEC) was counting the votes cast the day before. A minibus taxi driver on the route from Newlands shopping centre to Copacabana bus station complained that business was too slow.

“People don’t want to come out yet,” he said.

Perhaps they’re still recovering from the long weekend that was the elections, or perhaps they were distrustful of the peace.

Or perhaps, like the 37-year-old nurse who got on at the next stop, they were simply using the morning to travel back home. Tendai was in high spirits, because she voted for MDC presidential candidate Nelson Chamisa and believed the news spread by the party that he had won.

She laughed about her age. Born in the year that former president Robert Mugabe stepped up to power, she’d never known anything but his rule.

“We are tired, we want to see a change,” she said.

Chamisa himself was bullish, tweeting:

“Winning resoundingly… We now have results from the majority of the over 10,000 polling stations. We’ve done exceedingly well. Awaiting ZEC to perform their constitutional duty to officially announce the people’s election results and we are ready to form the next govt. #Godisinit”.

Zanu-PF was claiming victory too, but perhaps not quite as loudly as the MDC. An official said Zanu-PF’s pre-election estimate was around 74% of the votes for President Emmerson Mnangagwa, but their tally of the results show it’s about 10 percentage points fewer.

That’s still a more convincing win than the MDC would concede.

Thing is, winners don’t declare themselves winners. The MDC is using this strategy to flex its muscle to perhaps negotiate a deal with Zanu-PF once the official results are out. Kenyan opposition leader Raila Odinga had done it before in a closely contested environment where he was out-rigged. He was appointed prime minister in 2008 in a negotiated deal amid post-election violence.

Whether the MDC would follow this is unclear. Conceding that he believed there would be a run-off at best, meaning none of the presidential candidates would get a majority over 50%, a young MDC activist confidently declared that “there will be civil war” if Chamisa wasn’t declared the winner.

“Right now we have a negative peace,” he said.

It’s not clear whether supporters would have enough guts or know-how to stand up to the same army which kept Mugabe in power for all these years, and which then strong-armed him out of power in November 2017.

Still, a crowd gathered in front of Morgan Tsvangirai House, the opposition headquarters on Nelson Mandela Drive, soon after newly elected Harare East MP Tendai Biti held a post-lunchtime press conference there saying the opposition would take ZEC to court to force it to release results.

People in the crowd said they were celebrating the MDC’s win. Later, when trucks with police officials and water cannon drove past them, perhaps in a subtle attempt to constrain and intimidate, some in the crowd defiantly shouted slogans at them and greeted them with open palms – the opposition gesture.

Meanwhile, not far away, in the Rainbow Towers Hotel, the ZEC started the laborious process of releasing the results by reading them aloud, candidate by candidate, constituency by constituency. There are 210 across the country. If it goes on like this, it’s likely the country will have been lulled to sleep before anyone could think of revolt.

Unlike the announcement of elections in South Africa, the results aren’t tallied by a scoreboard in the results centre, and the ZEC’s website probably pre-dates Mugabe’s rule, so no results were posted there either. NGOs have taken it upon themselves to post independent tallies of the results online or on Twitter. It is, however, illegal to collate these.

Still, the first press conference – to announce the first seven constituencies – was widely watched on television across the country.

In the Rainbow Towers Hotel bar, a group of Zanu-PF officials and supporters cheered each victory as if it were a presidential triumph.

Zanu-PF candidates got the first six out of seven constituencies convincingly, while an early pattern was established of an often split vote between the MDC and independents, with independents being the biggest losers. By the second press conference, most bar patrons ignored the eNCA live broadcast in the corner, concentrating instead on their beers.

The ZEC has until Saturday to announce the presidential results, but hinted they could be done sooner. Zimbabwean voters, eager to see the country move forward, no doubt would like to believe this. DM