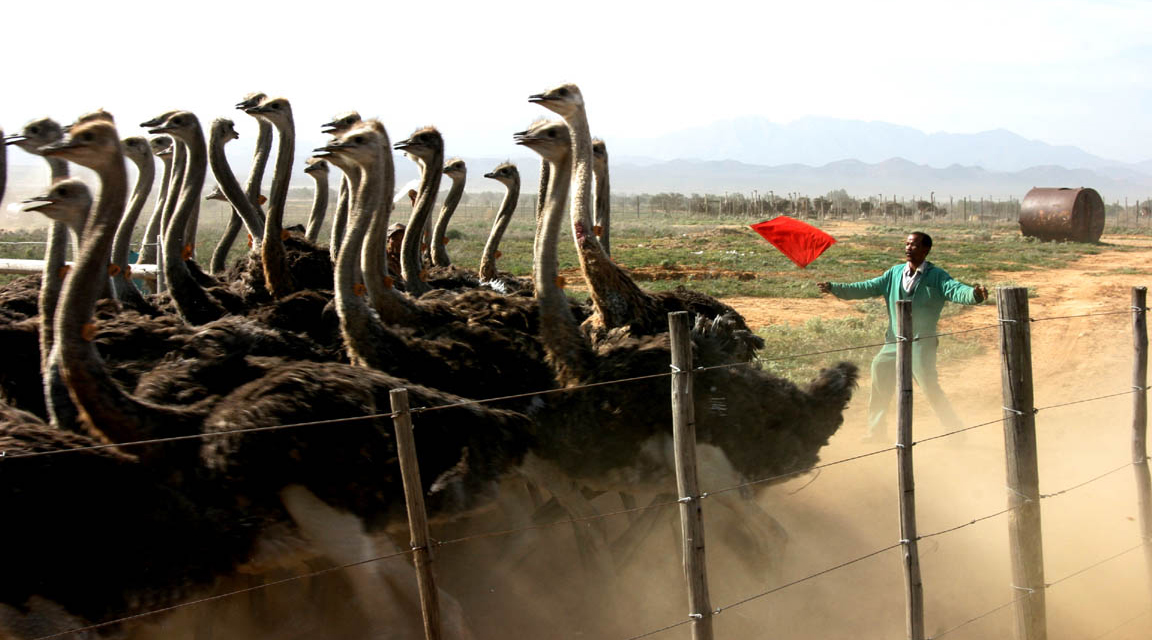 An ostrich farm in the Oudtshoorn district of the Klein Karoo in the West Cape province. (Photo by Juhan Kuus via flickr)

Rather than amending section 25 of the Constitution, efforts should be focused on the finalisation of the Expropriation Bill and other empowering legislation to make expropriation, with or without compensation, more accessible.

There is an important link between current debates around land expropriation, and learners’ right to basic education. This is especially true for the thousands of learners who attend public schools located on privately-owned land.

As public hearings on the proposal to amend section 25 of the Constitution to allow for expropriation without compensation enter their final leg in the Western Cape this week, it is important to bring into focus government’s failure to use expropriation to ensure and protect the security of tenure of schools; that is, the right of schools to access and occupy land for long-term use. Important also is assessing whether this failure can be attributed to the current wording of section 25 of the Constitution.

The Constitutional Court has clearly and consistently affirmed the paramount importance of the right of access to education and has identified unobstructed access to schools and school grounds as an important component of this right.

In the absence of secure tenure, access to public schools on private land, particularly farm schools, which are historically among the poorest schools in the country, is often threatened when farm owners decide to increase rent, sell or repurpose their land, or actively try to prevent learners and teachers from accessing the school.

Equal Education (EE) and the Equal Education Law Centre (EELC) support expropriation without compensation. Our apartheid past and the slow pace of land reform have given rise to circumstances which necessitate this possibility.

However, compensation is not the only, or even the most pervasive, impediment to achieving effective land reform in this country.

According to the High-Level Panel tasked with assessing South Africa’s key legislation and the impact thereof since 1994, more serious constraints to land reform include “increasing evidence of corruption by officials, the diversion of the land reform budget to elites, lack of political will, and lack of training and capacity…”.

The complexity of the challenges facing our current land reform programme, and government’s inability to fully utilise existing expropriation and tenure reform mechanisms to overcome these challenges, are reflected in the case of Grootkraal Primary School.

Grootkraal Primary School is a public school that has been operating, for more than 80 years, on private rural land near Oudtshoorn in the Western Cape, subject to a lease between the landowner and the Western Cape Education Department (WCED).

In May 2011, following a change in ownership of the property, and the unwillingness of the new land owner to extend the WCED lease, the school was notified that it would be closed, and that the 160 learners attending the school would be accommodated in mobile classrooms at a small farm school nearly 20 kilometres away.

The Grootkraal community brought the matter before the Western Cape High Court, where EE, represented by the EELC, made submissions as a friend of the court.

The South African Schools Act (SASA) expressly provides for expropriation in the education context. MECs are empowered to expropriate land in the public interest for any purpose related to education. SASA also allows for public schools to be operated on private land on the basis of a lease agreement, which must provide, among other things, for secure long-term occupation and use of the property by the school.

The Hunter Committee, which was mandated to make recommendations on the approach that should be taken by the post-apartheid government in relation to farm schools, recommended that expropriation be the preferred option, rather than a long-term lease. Nonetheless, education experts note that the expropriation option is wholly underused despite being expressly articulated in SASA and favoured by the Hunter Committee.

In the Grootkraal case, the MEC for Education in the Western Cape failed to exercise her statutory duty to consider expropriation before “relocating” the learners. Based on our understanding of and experience in the Grootkraal matter, reasons for the MEC’s failure to secure the tenure of Grootkraal Primary School include a lack of proper understanding of the mechanisms provided by SASA, the absence of practical guidance in legislation as to when and how to invoke these mechanisms, and a lack of political will and capacity to implement.

Against this reality, we must ask ourselves whether an amendment to section 25 of the Constitution to provide for expropriation without compensation would overcome the many barriers facing the current land reform programme. The answer is an unfortunate “no”.

In fact, not only will such amendment be ineffective, it will also be entirely unnecessary in order to facilitate expropriation without compensation – the current wording of the Constitution already enables this.

The question of expropriation without compensation has already been considered within the current constitutional framework by the Land Claims Court in Nhlabathi v Fick. The court found that “there can be circumstances where the absence of a right to compensation on expropriation is reasonable and justifiable, and in the public interest (which includes the nation’s commitment to land reform)”, particularly where there is minimal infringement to the owner’s rights when weighed against the public interest.

Importantly, the Constitution expressly states that no provision of section 25 may impede the state from achieving land reform in order to redress past racial discrimination.

If not an amendment to section 25 of the Constitution, what then is required to propel the land reform programme? First, we need to understand that while the Constitution is an enabler of transformation, it is not and cannot be the complete means of achieving such transformation in and of itself.

This means that the legislature must use its power to make laws and give effect to the transformative purpose and spirit of the Constitution. In particular, new tenure reform legislation must be enacted, and the long-anticipated Expropriation Bill must be passed.

These represent crucial opportunities for the state to outline the circumstances under which property must be expropriated, including when this must take place without compensation, and how this must practically be carried out. This will also provide clarity on how expropriation for educational purposes, as allowed for in SASA, should be implemented.

Rather than amending section 25, efforts should be focused on the finalisation of the Expropriation Bill and other empowering legislation to make expropriation, with or without compensation, more accessible.

Experience in other countries such as Zimbabwe, where land has been expropriated without compensation, shows that structural challenges associated with insecure land tenure and access to land by the most vulnerable may persist despite such measures being taken. These are the types of challenges that must be addressed in empowering legislation.

South Africa simply cannot afford further unnecessary delays in ensuring just and equitable access to land. It is further unconscionable that learners should continue going to school with the fear that their access may be impeded or denied, especially where measures exist to ensure school tenure security.

The political powers-that-be must stop dragging their feet and speak truth to their manifestos and action the political will required to implement existing measures and to properly implement the Constitution’s promise of redress and equity. DM