Reform in Zimbabwe: More than billboards 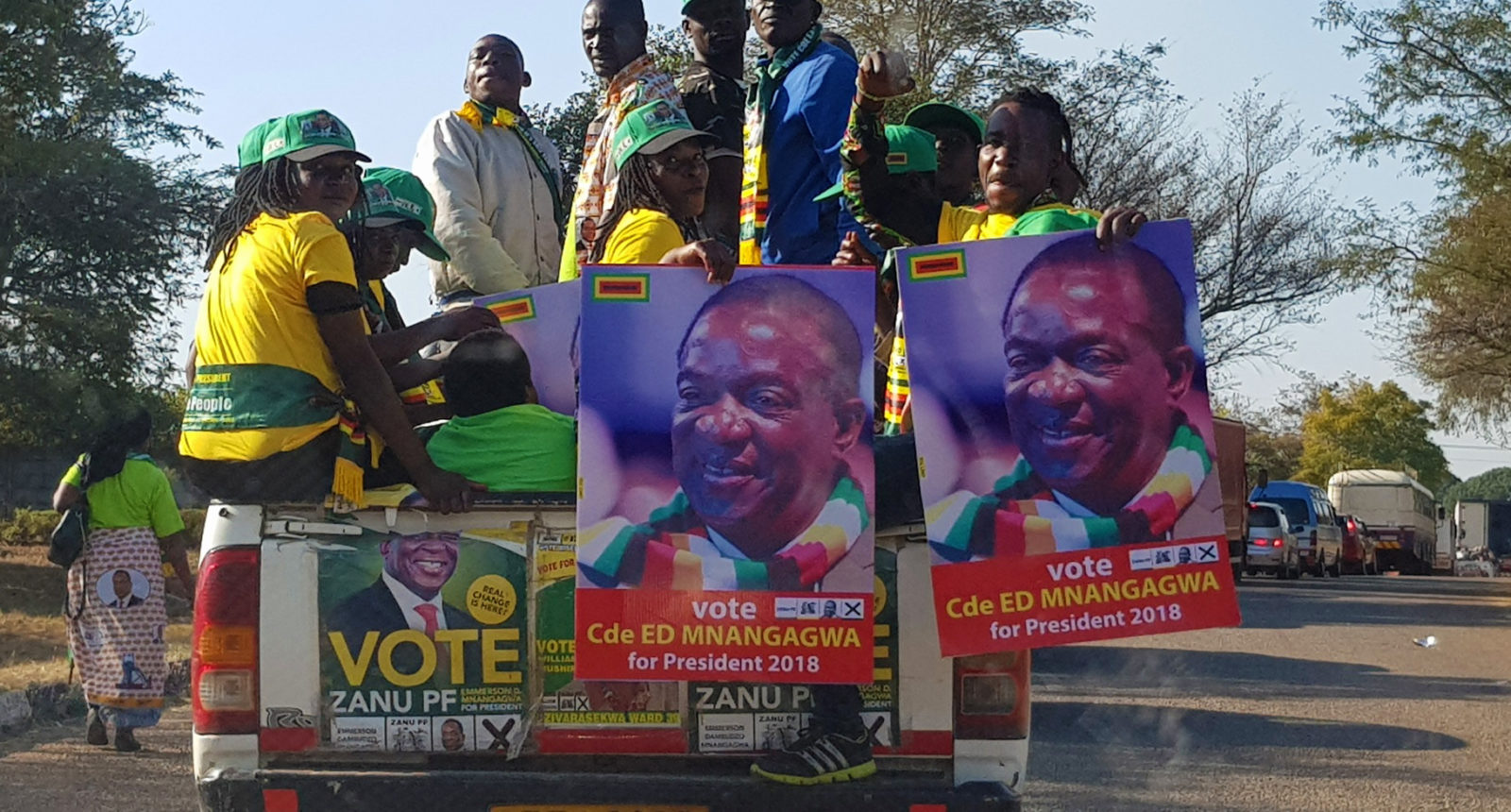 The clash thus between Zanu-PF and the MDC is one between old and new, between rural and urban based communities, and between the older and younger generations of Zimbabweans.

In the movie Our Brand is Crisis, the political consultant, Jane, played by Sandra Bullock was asked if she would work for a candidate she did not believe in.

“I could convince myself of anything if the price was right,” she replied. After all, she mused, “Truth is relative in politics.”

A fictionalised account of the role of the campaign strategists Greenberg Carville Shrum in the 2002 Bolivian election, a country described as having an “economy in real trouble” with a “fragile democracy”, the movie could have been an African election setting. Jane takes a candidate, Pedro Castillo (based on the real life Gonzalo Sánchez de Lozada) lagging hopelessly in the polls and propels him into State House. The consultants are portrayed as “the syringe that injects the people’s voice” into the campaign, using every trick, fair and foul, to do so, reinventing Castillo as the only man to solve the country’s crisis.

There are plenty of such syringes around Africa, with their focus groups, polling, media advice and content, and strategy sessions. And there is a whole new digital industry around communications security, targeting, messaging and, if the rumours are to be believed, rigging.

Take Zimbabwe. Foreign consultants have allegedly swarmed around the ruling Zanu-PF in developing a fresh narrative for the ruling party: that President Emmerson Mnangagwa has the experience for the job and will lead, in the words of his ubiquitous slogan, the population “to a new Zimbabwe”. Or “ED – Phee” shout number plates of Zanu supporters: “ED – Enter”.

ED’s rise via the military takeover in November 2017 is portrayed as heralding a new dawn.

Everywhere in Harare are giant billboards proclaiming what Mnangagwa, who has been in government for the last 38 years of Zanu rule since independence from Britain, will do for Zimbabwe as President.

“For policy consistency and implementation”, “Freedom of speech and worship guaranteed”, “Principles and Strong Leadership, Visionary and Mature Leadership, Transparent and Accountable Leadership, Delivering the Zimbabwe you want”, ?”Growing the manufacturing sector to create more jobs”, “Open for business”, “For ease of doing business”, and, on the face of Zanu’s HQ, “The voice of the people is the voice of God”. 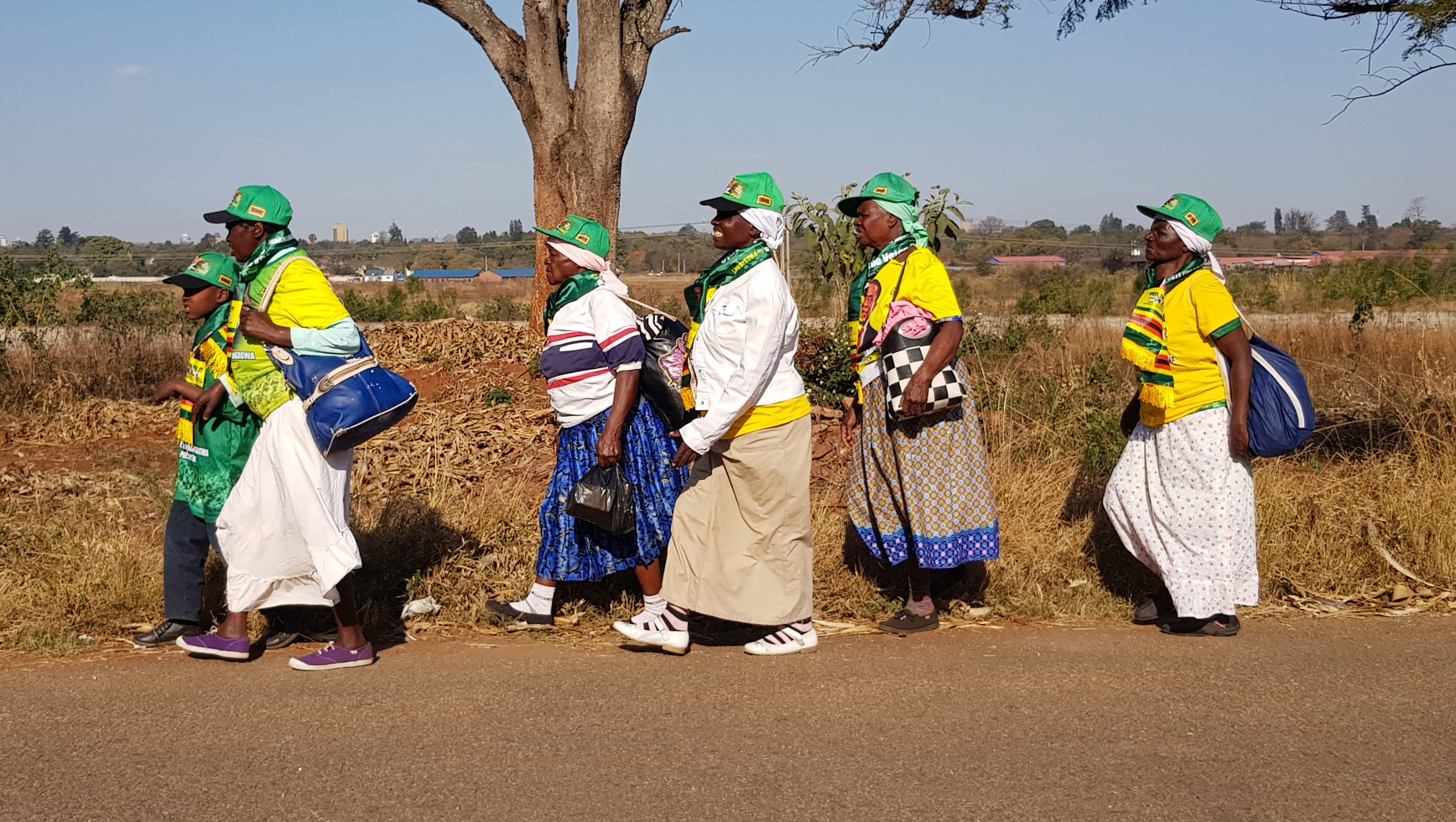 The means of such messaging illustrates the difference in funding available to the two main parties, supposedly involving a $200-million Zanu war-chest compared to “nearly nothing”, as one Movement for Democratic Change (MDC) party official put it, for the opposition. The use of text messaging to voters also hints at a more sinister story of state access to phone records and other private information.

That’s not all. Zanu has endeavoured to cement this perception by the timing of investment announcements. Just a week before the election on 30 July, for example, Mnangagwa officiated at a ground breaking ceremony of a $4.2-billion platinum project.

The ruling party is not leaving any stone unturned. Indeed, many question whether Zanu, and its army backers, have any intention of leaving power, ever. The history of recent elections suggests that they don’t.

Yet some things have certainly changed since Mnangagwa took over. For one, the threat of violence and state intimidation has been lifted, the election so far being held in remarkably good spirits. Ask any Zimbabwean who they think will win, and the answer comes back clear as to whom they will vote for. Regalia is openly flaunted, and not just Zanu’s yellow and green, but also the red of the opposition MDC Alliance.

Led by a charismatic lawyer-turned-preacher, Nelson Chamisa, the MDC is relying on a message of change, in stark contrast to Zanu’s self-declared continuity. The call-and-answer banter between the MDC and the tens of thousands at the party’s final election rally held at ‘Freedom Square’ alongside the African Union’s election observer headquarters, just a stone’s throw from the Zanu HQ, was focused on “Chinja” (change) and “Matiro” (behaviour). Lots of laughs and open hand waves, the MDC signal, greeted the MC’s chant for “Bye Bye Zanu-PF” and “Zanu-PF, Enough is Enough”.

Opinion polls have the election too close to call. But what is clear is that whoever takes over faces massive challenges.

Some donors, led by an enthusiastic post-Brexit Britain, are said to be queuing up to spend their taxpayer’s money.

Yet resources have never been the underlying problem in Zimbabwe.

Rather the difficulties are much more about software than hardware. Short-term recovery will depend on the extent of the traditional mismatch between donor ideas and the intent of government. In the longer-term it will be down to local ownership and implementation of a development plan to attract permanent capital.

Statistics hint at the extent of the challenge. As a result principally of Zanu’s ruinous land reform strategies which collapsed the agriculture backbone of the economy, per capita income is way below its 1975 high of US$1,350, when it comprised 91% of the sub-Saharan African average. It is today just US$950, or 56%.

But such stats don’t, as ever, tell the full story.

One measure of the problems can be seen in the condition of Zimbabwe’s towns and cities. The capital, Harare, is badly run down, its infrastructure facing what the local council estimates is a $10-billion bill to repair its potholed roads, mostly unlit traffic lights and street lamps, sewerage systems and water supply.

There is a more pernicious aspect. The fast-track land redistribution policy initiated after 2000 has resulted in a flood of poor people into the urban areas. They live in unplanned sprawls, “99% of them”, says Tendai Biti, a former MDC finance minister in the unity government which ran things between 2008-2013, “are in extreme poverty just eking out enough money each day for a small food parcel of maize and cooking oil”.

Known as “Tsoana”, siShona for “an accident”, these Zimbabweans live on the urban fringes, surviving by informal trading, labourers, as Mahwindi taxi marshals, and off the proceeds of Makorokoza artisanal mining.

The effect is not pretty. Chegutu, about two hours driving west from Harare, was once a bustling farming centre, which enjoyed a large textile milling, weaving and garment factory among other thriving businesses. These have all but disappeared today, the town a shabby wreck remarkable only for the carcasses of two decaying Air Rhodesia Viscounts in a dusty square, once housing the Flying Pot Restaurant.

Zimbabwe’s urban growth rate, estimates the veteran economist John Robertson, is now 7.5%, or three times the rate of population expansion. This translates into the cities doubling in size every ten years. Or as Robertson notes, “Whatever we built in the last hundred years, we need to build again in the next 10.”

The clash thus between Zanu and the MDC is one between old and new, between rural and urban based communities, and between the older and younger generations of Zimbabweans.

The legitimacy of an election victory can help to facilitate reforms, providing the poll is seen as free and fair.

But the election is not an end in itself.

A reformist route will have to be locally owned, no matter the vested enthusiasm of donors and business. It will require undoing a mindset and historical mythologies, not least that Zimbabwe has loads of skilled folk for the job. They don’t any more. Many have left, and the public school system has collapsed. Or that Zanu’s policies just need to be tweaked to succeed. They will need to be changed, wholesale.

Some of the government’s 350,000 employees who guzzle most of the tax revenue, and the hundred state owned companies, will have to be shed to bring government spending under control. Or that if you sort out the foreign exchange situation by re-engineering the system of multiple exchange rates, the currency will become more competitive. It won’t. This will have to be the result of a much tougher and long-term process of policy reform and investment in productive assets to create the jobs the population craves.