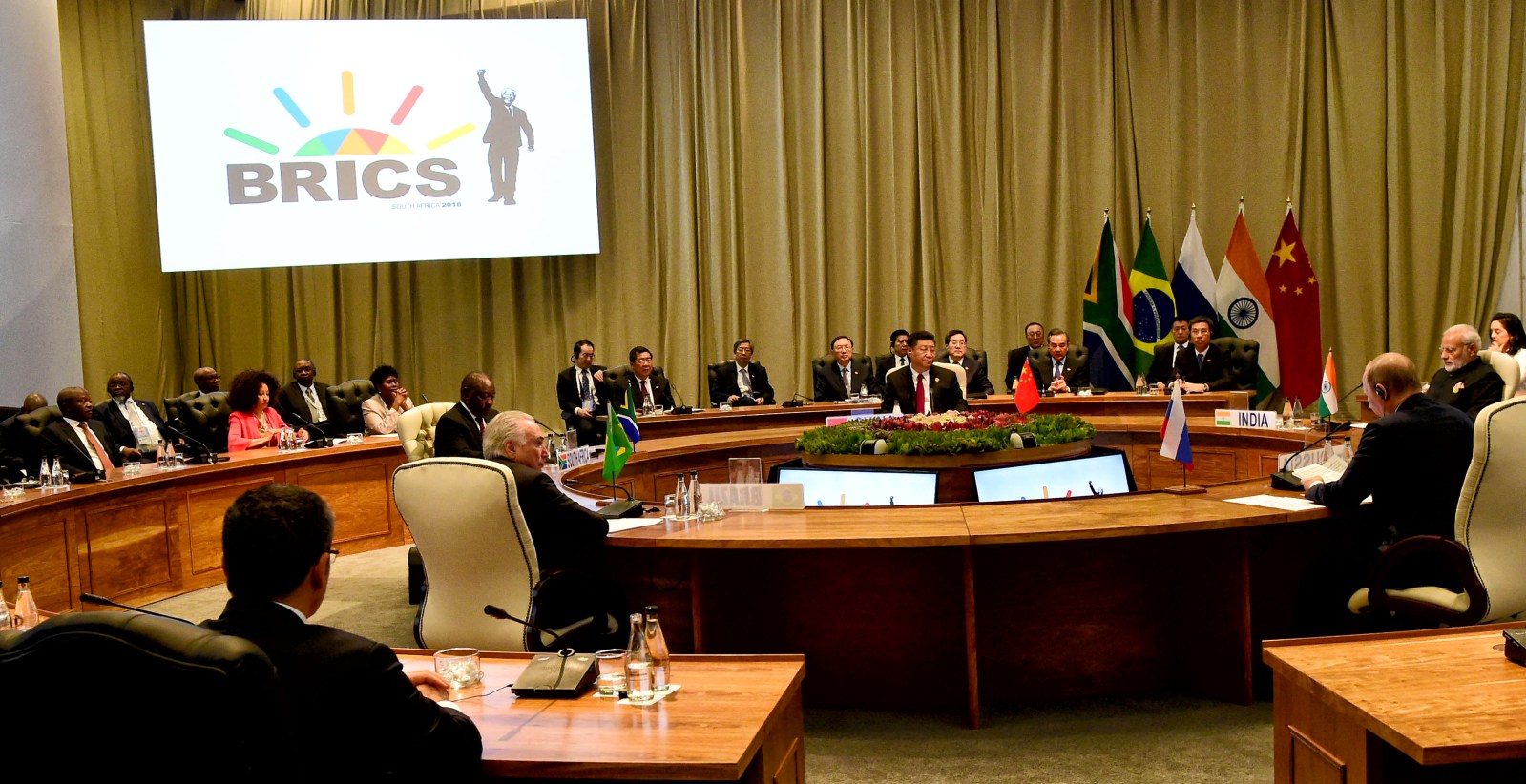 President Cyril Ramaphosa with BRICS leaders in a closed session on the second day of the 10th BRICS Summit at the Sandton Convention Centre. 26/07/2018. Kopano Tlape GCIS

Cyril Ramaphosa’s virtual journey with his fellow BRICS leaders to the Cradle of Humankind was ruined by a satellite glitch. And some of his peers are reported to be feeling snubbed.

The BRICS summit now under way in Sandton is supposed to be all about harnessing the “Fourth Industrial Revolution” for the benefit of the five BRICS countries.

But President Cyril Ramaphosa must have wished his technicians had just mastered the Third Industrial Revolution when they failed to link him and his fellow BRICS leaders by satellite to the Cradle of Mankind in Sterkfontein on Thursday.

But Ramaphosa announced after his summit meeting with the other four leaders that the visit had been called off for logistical reasons. Officials explained it would have added two hours to the programmes of the leaders, leaving little time for their bilaterals – one-on-one meetings, including with the many African and emerging economy leaders the BRICS leaders are to meet together on Friday.

Putin’s meeting with Turkish President Recep Tayyip Erdoğan on Thursday was the most speculated about, as the two strongmen have much to discuss, especially about the Syrian civil war, in which both are deeply involved.

When the Maropeng visit was cancelled, Ramaphosa instead arranged for his fellow BRICS leaders to “visit” the Cradle of Mankind by satellite because he said it was important to show them “where we all came from”. This might also inspire some thoughts about “where we might be going”.

Shortly afterwards Higher Education Minister Naledi Pandor appeared briefly on the big screen from Maropeng, flanked by archaeologists who had made some of the discoveries of man’s ancestors at Sterkfontein.

But then the sound and later the picture disappeared while Xi, Putin, Modi and Temer looked embarrassed and Ramaphosa looked annoyed.

He tried to make the best of it, joking, “I’m sure they will find someone for us to talk to in a minute, one who passed away millions of years ago.”

For one senior Chinese official, the incident epitomised what he said was wider chaos in the organisation of the summit, although other visiting officials found it “par for the course” for a summit.

More seriously, one official reported that both Putin and Narendra were irked that they were not granted state visits – as Xi was, on Tuesday. They were especially annoyed because when SA last hosted the BRICS summit, in 2013, Xi had also been given a state visit. That year Putin also was, though it was rather tagged on, while none of the other three leaders was granted this honour.

Last week, Anil Sooklal, South Africa’s most senior diplomat in charge of BRICS, denied there had been unhappiness over the state visits. He said Modi had made a state visit in 2017 while SA and Brazil had agreed to hold off state visits until after the elections in Brazil later this year. Meanwhile press attaché from the Russian embassy Alexander Kulyaev was quoted by News24 as denying Putin was unhappy about not getting a state visit and said one would be arranged later.

But another South African official said because Putin was widely seen as being very close to former President Jacob Zuma, the presidency had been advised to receive Putin on a state visit to weld better relations with Ramaphosa.

Zuma was alleged to have been scheming to ensure Russia won a trillion-rand contract to build six nuclear power stations in SA, a deal which Ramaphosa has reportedly scuppered, supposedly to Putin’s annoyance. The only visible trace of anything nuclear at BRICS, however, was a large rigid briefcase, closely guarded by a pair of Russian officials, one in naval uniform, outside the room where the BRICS leaders were meeting.

“That contains the red button to activate Russia’s nuclear arsenal. It has to travel with Putin everywhere,” a South African official confided.

Just another little symbol of the big league South Africa has entered by joining BRICS. And the higher costs of getting it wrong. DM