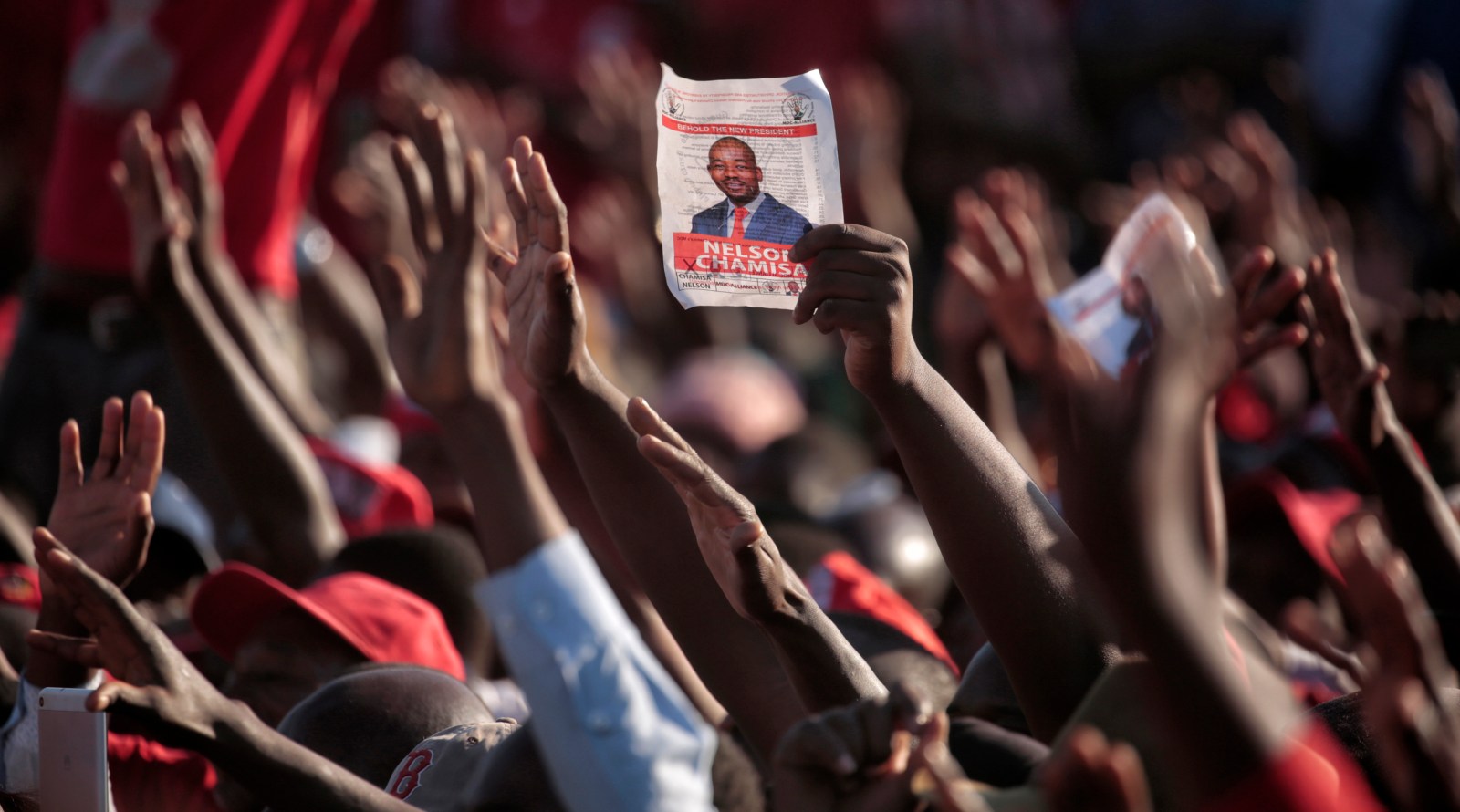 Supporters attend an opposition Movement For Democratic Change (MDC) Alliance election campaign rally addressed by the party leader Nelson Chamisa (unseen) in Chitungwiza, Zimbabwe 26 July 2018. Reports state that there are 23 presidential candidiates and more than 120 parties who have registered to take part in the elections as Zimbabweans go to the polls on 30 July 2018. EPA-EFE/AARON UFUMELI

With just three days before Zimbabweans go to the polls, there’s much to be positive about but there are still concerns particularly in rural areas where intimidation appears rife.

When Zimbabweans go to the polls on July 30, 23 presidential candidates will be vying for their vote.

Zimbabwe’s harmonised election comes eight months after a military intervention which forced a change of guard in November 2017.

The election is unique in that it is the first since independence from Britain in 1980 in which former President Robert Mugabe will not be a candidate.

And for the first time since 2002, international observers have been invited to observe the ballot, which could never have been imagined under Mugabe.

A record 23 presidential candidates have been successfully nominated to run for president, while more than 100 parties have shown interest, the largest number since the country gained independence.

But most importantly, this year’s poll is unique in that unlike previous elections, which have been marred by bloody violent clashes, the period before voters head to the polls has been largely peaceful.

Registered political parties have held campaigns freely, and public print and broadcast media have by and large been able to cover opposition party rallies as well as those of the ruling Zanu-PF.

Individuals who have attempted to destabilise campaigning have been swiftly arrested. These arrests have included members of Zanu-PF who have in the past acted with impunity.

But despite the seemingly peaceful environment, memories still linger among rural communities of the violence of the last elections; and Zanu-PF appears to be using that fear to its advantage.

While no citizens have been physically assaulted, harassed or displaced as in the past, party agents have apparently being reminding villagers of the past atrocities committed with the assistance of the military.

Shingirai Nheweyembwa (38), said that although incidents of violence had drastically reduced, intimidation in his community was rampant and that opposition supporters were being threatened with unspecified action in the event Zanu-PF lost the elections.

Nheweyembwa’s parent’s home burned, and he was beaten up, hospitalised and then arrested for being affiliated to an opposition party in 2008.

“Some of them are being told that there is going to be a run-off and those who would not have voted for Zanu PF will face the violence they experienced in previous elections,” Nheweyembwa said.

He said he still had vivid memories of the period when he became active in MDC structures in the area, and was open about his political party of choice.

“I started seeing people following me, the police arresting me and at some point when I was on my way home, a group of Zanu-PF supporters was waiting for me and they started wrestling and beating me up,” says Nheweyembwa.

He said Mashonaland East province was a hotspot for violence and a ruling party stronghold, with the party recording “landslide” victories as chiefs and village heads would mobilise and accompany people in their areas to go out and vote for the ruling party.

“The situation is a bit different. We are no longer forced to go to rallies and cases of violence and intimidation have gone down as compared to past elections,” he said.

Kudakwashe Chingwena, who is running for council office on an MDC Alliance ticket, said this year they were freely interacting with their Zanu-PF counterparts, and are “even drinking beer with them”.

He still has memories of people from the opposition being tortured and their houses burnt while others were killed for not supporting the ruling party in previous elections.

“My father, a staunch MDC supporter had a colleague who was abducted and killed (in 2008), and this sent a message to me and I had to leave home immediately,” Chingwena recalled.

Several reports of intimidation and threats by Zanu-PF have been recorded, with some in the party said to have been demanding voter registration slips from villagers as a way of trying to make them believe their voting choices would be known.

We the People of Zimbabwe, a project tracking the country’s trends in the pre-election period, have recorded 270 violations a week in the build up to Monday’s election.

According to Election Situation Room (ESR) members, overt violence has been limited although intimidation has been rife across the country. The ESR is a platform of 40 civil society organisations tracking and reporting on electoral malpractices.

The ESR says much of the intimidation reported has been by traditional leaders alongside allegations of military activities in communities.

“Citizens have received campaign messages on their phones with specific details of their constituency and their wards from Zanu-PF… such citizens wonder how the party has had access to accurate personal information on their registration, as such this has increased fears and feelings of intimidation,” the reports noted.

Some villagers were being told that the pictures taken during the Biometric Voter Registration (BVR) process would be used to identify those who have voted for the opposition.

In 2008, former opposition leader the late Morgan Tsvangirai pulled out of the presidential run-off race after attacks by the state and ZANU-PF claimed the lives of at least 200 of his supporters.

The Spokesperson of the Office of the United Nations Commission on Human Rights (OHRCHR), Elizabeth Throssell shared concerns over cases of intimidation and threats against opposition parties in rural areas.