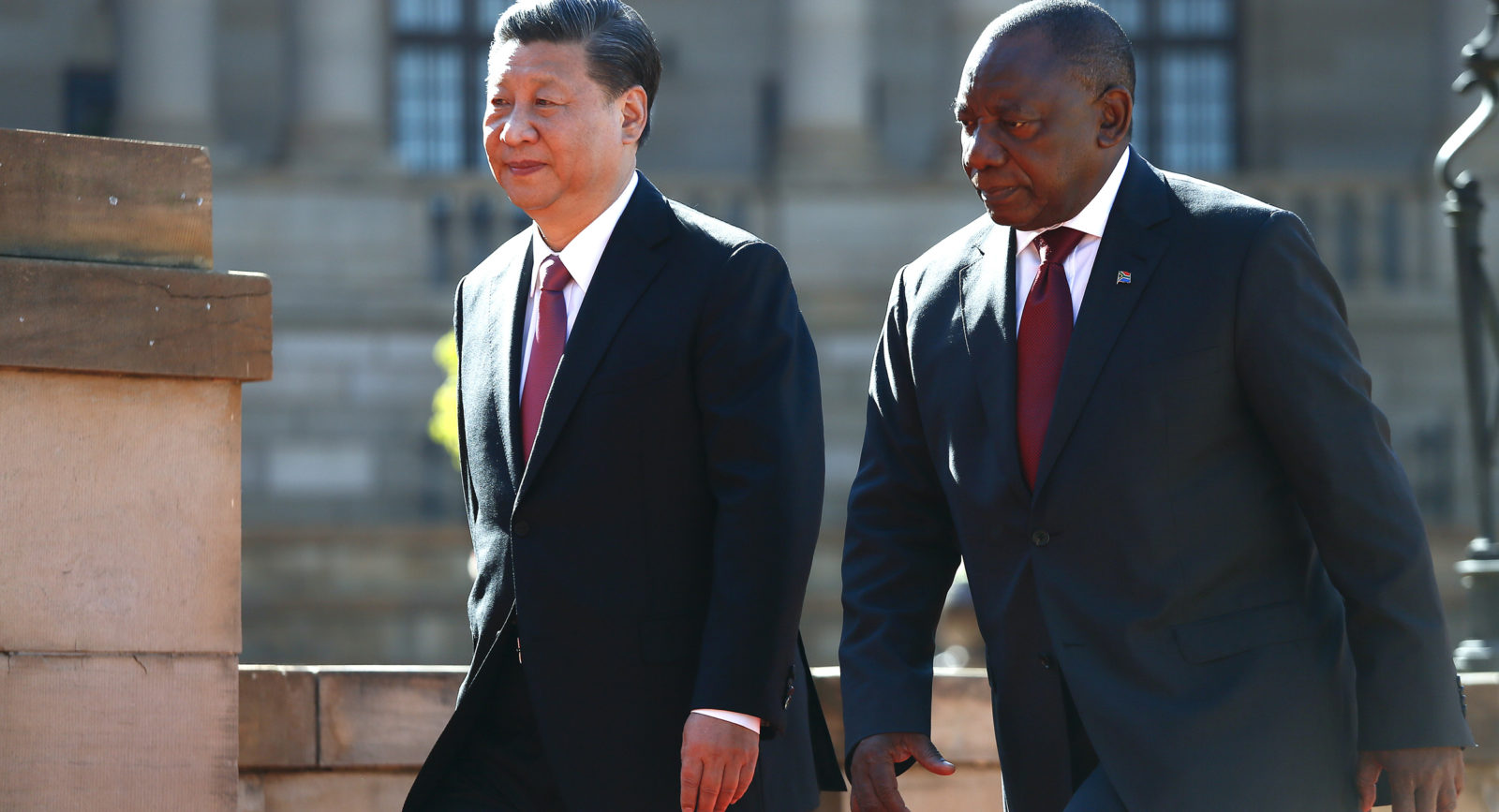 Chinese premier tells BRICS business leaders in Sandton that the five BRICS countries must resist a trade war, though he avoided referring directly to US President Donald Trump.

Chinese President Xi Jinping has called on the five BRICS countries to resist the growing global trade war by working together to build an open world economy.

Xi was addressing about 1,000 business leaders from the five BRICS member countries – Brazil, Russia, India, China and South Africa – at the BRICS Business Forum in Sandton on Wednesday. This was the first day of the 10th BRICS summit which is being hosted by South Africa, the current BRICS chair.

Xi said a trade war should be rejected “because there will be no winner”. Without mentioning the US or President Donald Trump by name, he said “those pursuing economic hegemony… will only end up hurting themselves”.

In the face of this trade war, Xi said:

“We BRICS countries should firmly promote an open world economy, be resolute in rejecting unilateralism and protectionism, promote trade and investment liberalisation and facilitation, and jointly steer the global economy toward greater openness, inclusiveness, balanced growth and win-win outcomes for all.”

The BRICS countries should increase co-operation among themselves and others to build this open economy, Xi said.

Major changes were unfolding in the world, presenting both opportunities and challenges for emerging markets and developing countries, such as those in BRICS.

Noting that BRICS was now entering its second decade, the Chinese leader said the next 10 years would be crucial as new global growth drivers would replace old ones.

A revolution in science, technology and industries featuring artificial intelligence, big data, quantum information and biotechnology was gaining momentum and giving birth to a large number of new industries and business forms and models which would fundamentally change global development and people’s work and lives.

“We must seize this important opportunity to enable emerging markets and developing countries to achieve leapfrog development,” Xi said.

The next decade would also see a profound reshaping of the global governance system, Xi said. The world was moving towards multipolarity and greater economic globalisation, despite setbacks. Geopolitical hotspots, terrorism and armed conflicts still haunted the world.

The international community faced a choice “between co-operation and confrontation, between opening up and a close-door policy, and between mutual benefit and a beggar-thy-neighbour approach.”

Making the right choice in favour of co-operation and openness would impact the prosperity and the security of the world.

“As the world economy is going through profound transition and changes, only by opening themselves can different countries achieve mutual benefit, shared prosperity and sustainable development. This should be the right choice for all countries.”

Ramaphosa agreed that the multilateral trading system was facing unprecedented challenges from the rise in unilateral measures that were incompatible with World Trade Organisation rules and were impacting especially on developing countries.

“The BRICS countries are increasingly recognised as an influential formation in reinforcing the principles of transparency, inclusiveness and compatibility within the multilateral trading system,” Ramaphosa said.

There was also much scope to expand the value of trade between BRICS countries.

As a country that is primarily an exporter of commodities to its BRICS partners, South Africa supported a shift towards more complementary trade, where South Africa would export more value-added goods, he said.

He said one of the most important achievements of the first decade of BRICS was the establishment of the New Development Bank, which was filling a critical gap in project funding.

The bank had already disbursed loans totalling $5.1-billion, with approvals amounting to $1.7-billion in 2017 alone. DM