While Bheki Cele hunts for a gun, Hermanus remains a ti...

While Bheki Cele hunts for a gun, Hermanus remains a tinderbox 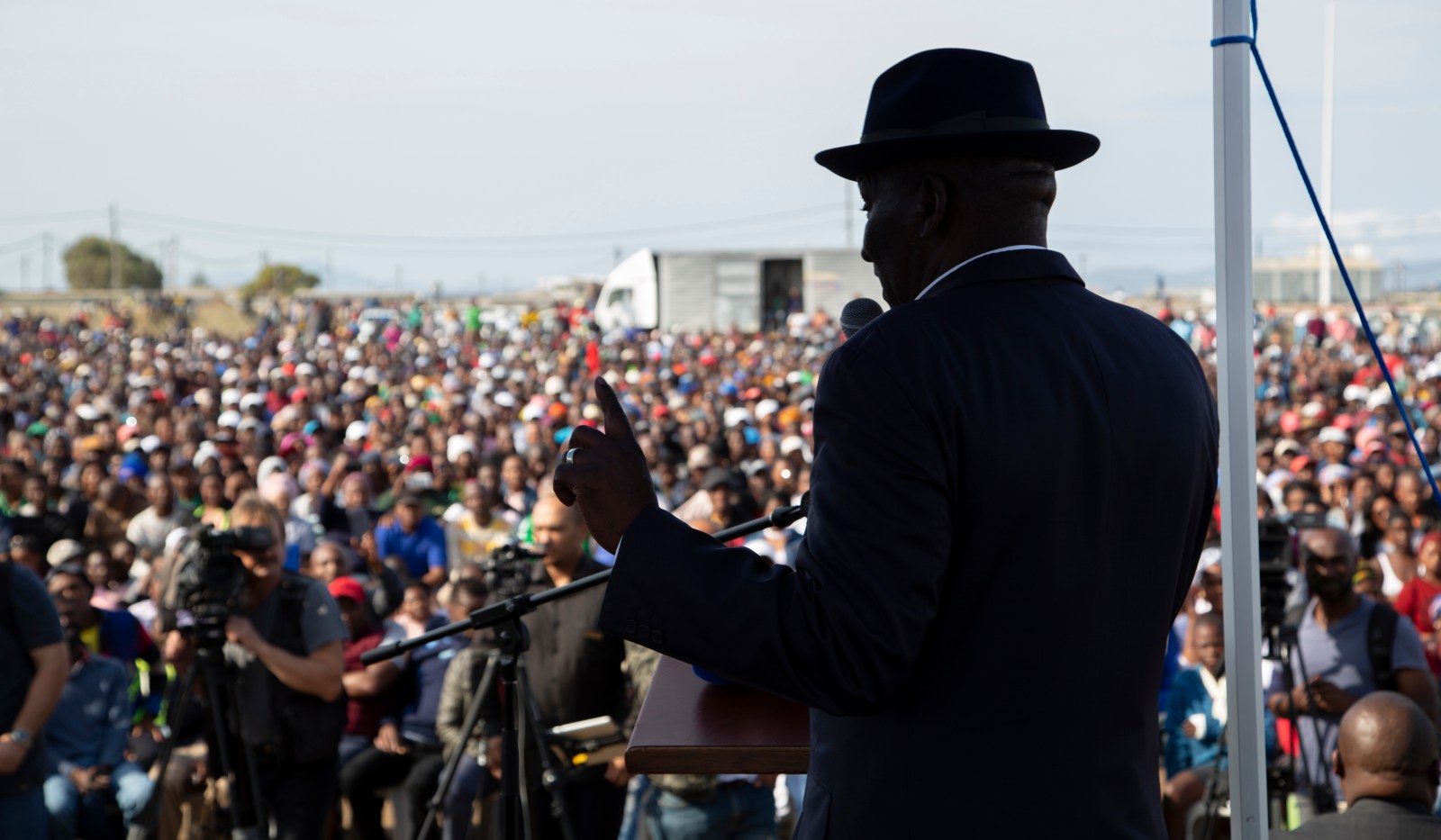 Since March 2018, the seaside town of Hermanus in the Western Cape has experienced waves of increasingly intense protest action. At least one life has been lost, an estimated R40-million caused in damage, and deep tensions exposed in the area. But there is also an element of the surreal to the situation – best illustrated by the fact that an unelected group of youngsters has ended up negotiating on behalf of an entire community with a minister whose department has no powers to resolve the underlying issues whatsoever.

Police Minister Bheki Cele repeated the words several times, surveying a crowd of thousands gathered to hear him speak at the Zwelihle Sports Grounds on Tuesday.

The gun in question is a 9mm police-issued firearm, taken off a riot cop last week together with a shotgun during a violent altercation which left the policeman in question airlifted to receive emergency medical attention.

The shotgun has been retrieved, but the 9mm piece is still missing.

Its theft has provoked a police crackdown on the Zwelihle township which residents say was swift and brutal.

On Tuesday, several were wearing the evidence. Sivuyisiwe Dyani’s left eye was taped closed with bandages. He told Daily Maverick he had been shot in the face by a policeman’s bullet during a raid in search of the missing gun.

Cele addressed the crowd from a stage which was flanked by a row of public order police members in full riot gear.

“My best present would be to go away and take my police with me,” he told Zwelihle residents. “But it’s not so.”

In fact, Cele had brought 36 extra cops with him to station in the township. They will remain there, he said, until the gun is found.

At least 60 arrests have been made in the township in the course of the last week. None has been as contentious as the detention, in early July, of Gcobani Ndzongana.

T-shirts and placards visible in the crowd on Tuesday pledged support for Ndzongana, who is the founder of an activist group called Zwelihle Renewal. It was Zwelihle Renewal’s leadership which shared a stage with Cele, and who made the announcement that on the basis of their negotiations with the police minister, a two-week shutdown of the township is now over.

The group’s leadership committee numbers either 13 or 15, depending which member you ask. They are strikingly young, officially not linked to any political party, and Tuesday’s events showed that they have succeeded in becoming recognised – by Cele at least – as the most significant mouthpiece for the Zwelihle community.

On Tuesday, in fact, Cele bypassed all official political structures in the area to meet with Zwelihle Renewal representatives first. It was only after this gathering that Cele made his way to the municipality to inform elected DA and ANC councillors, and municipal officers, what had transpired.

Researchers Daniel Hartford and Malose Langa suggested in a recent Daily Maverick piece that, on the basis of their research and interviews in the area, the leadership of Zwelihle Renewal appear to command the support of a large portion of the township’s population.

The group’s influence was on display on Tuesday, with its leaders receiving a warm reception and the mood of Zwelihle seemingly beginning to calm in direct response to the group’s negotiations with police.

Towards the back of the crowd gathered at the Zwelihle Sports Ground, however, more ambivalence was evident.

One 25-year-old resident told Daily Maverick that, as a result of the township-wide strike called by Zwelihle Renewal over the last fortnight, she had been fired from her job in the tourism industry. She declined to be named, because she still hoped to be able to appeal to her employer for reinstatement.

Her participation in the strike, she said, had been entirely under duress.

“We were freaked out. We’re young. We were told: ‘You will be burned’. We watched our neighbours’ furniture go up in flames.”

Gesturing at the leaders of Zwelihle Renewal, she expressed bemusement at the emergence of the group.

“I’m hoping democratically elected leaders take up this thing. How does this group manage to negotiate with the municipality?”

Her friend, a fellow 25-year-old who also refused to be named – “You can call me ‘someone who thinks people died for nonsense’,” she said – was even more critical of recent events, which she said had spiralled out of control to the detriment of the entire township.

But both women were quick to acknowledge that Zwelihle Renewal had tapped into deep and real discontent in the township.

The ostensible causes of the protest action, since March 2018, have been the potentially unlawful municipal sale of a piece of public land to private developers; the erection of a fence between Zwelihle and a majority-white area; the arrest and imprisonment of Gcobani Ndzongana; and more recently, the excessive use of police force in the township.

Yet the first woman said the real issue brewing within Zwelihle was much simpler.

“We are paid too little money. The average wage for Hermanus is ridiculous, and the gap between rich and poor is insane.”

Hermanus finds itself in a tinderbox situation replicated in areas all over the Western Cape, and indeed the country: where an extremely affluent, largely white town sits cheek by jowl with a rapidly expanding black township, and tensions brew accordingly.

The only unique aspect of the Hermanus context appears to be found in the ascendance of a group of community activists who have succeeded – by fair means or foul, depending on who you talk to – in galvanising the township over shared grievances in a manner which rejects the established party-political structures.

That the Zwelihle narrative has now become a dialogue between police chiefs and community activists is both counterintuitive and unsurprising.

It is unsurprising because in Police Minister Cele, Zwelihle Renewal have found a politician seemingly willing to recognise the group’s authority and give them the legitimacy of a public hearing.

“[The others] call us thugs, call us k*****s,” seethed the group’s Anele Prince to Daily Maverick on Tuesday. Zwelihle Renewal speakers railed against both the DA and the ANC before Cele took to the stage.

But the police’s position as chief negotiators in the situation is also counterintuitive because, as Cele pointed out to journalists on Tuesday, his department can do precisely nothing to address the underlying social grievances of the township.

“This is a problem I have always raised,” said Cele. “Everyone [in government] must do his or her job. But the war is now between communities and police.”

Earlier, he had made the same argument to his audience at the Zwelihle Sports Ground.

“Your issue is with service delivery and land, not with police,” Cele said.

But the police minister ended up accepting a memorandum of demands from Zwelihle Renewal which included among its bullet points: “Service delivery from Overstrand Municipality”.

Cele told the crowd that he would endeavour to engage other government departments over the township’s issues, including social development, health and education.

To journalists, he listed the most pressing next steps towards returning the township to normality.

And as a first priority: “The gun must be found.” DM