When Thatcher rode to Mugabe’s rescue

When Thatcher rode to Mugabe’s rescue

epa03655852 A photograph made available on 09 April 2013 shows Margaret Thatcher, when she was British Prime Minister, during a press conference in Jerusalem, Israel, 27 May 1986. Former Prime Minister Baroness Thatcher died after suffering a stroke at the age of 87, her family has announced. Thatcher was Leader of the Conservative Party from 1975 to 1990. Margaret Thatcher was Britain's first female prime minister and served three consecutive terms in office from 1979 to 1990. She was one of the dominant political figures of the 20th century in Britain. Margaret Thatcher held a life peerage as Baroness Thatcher, of Kesteven in the County of Lincolnshire, which entitles her to sit in the House of Lords. EPA/JIM HOLLANDER BLACK AND WHITE ONLY

A thick file of the UK Prime Minister’s correspondence just released by the National Archive in Kew and which covers the period from 1 May 1980 to 22 August 1991 – most from Margaret Thatcher’s time in office reveal – despite the cool tone of the official notes and memos – just how friendly and convivial the relationship between Thatcher and Robert Mugabe really was.

At 6pm on 23 September 1988 the Foreign Office sent a secret telegram, marked “flash” – immediate action – to its embassies in South Africa, Zimbabwe and Mozambique. British ambassadors were to alert the respective governments of an “imminent” raid by “British nationals and mercenaries recruited in the UK to free South African agents imprisoned in Harare”.

Robin Renwick, Britain’s ambassador to Pretoria, was instructed to contact Department for Foreign Affairs “tonight’, as well as Niels Barnard, director-general of National Intelligence, and General Jannie Geldenhuys, Chief of the Defence forces since, as the telegram put it, he “may be privy to the exercise”. Renwick was to make it clear that if any such raid took place it would have “a serious effect on UK/South African relations” – just at a time when international economic sanctions against the apartheid state were ratcheting, and talks around South African’s intervention in Angola was at a crucial stage in New York.

The UK’s High Commissioner in Harare, Ramsay Melhuish, was told to contact anyone in authority – “this evening if possible” – since President Robert Mugabe and his foreign minister, Nathan Shamuyarira, were not available. (Mugabe was on his way to the United Nations, to address the General Assembly annual meeting.)

The raid on Chikurubi prison might include “a number of British mercenaries, a feature which we would strongly deplore”. The telegram, signed by the British Foreign Secretary, Sir Geoffrey Howe, was cautious on one point – there was no reason to believe that the raid had been “authorised from the top” of the South African government. Finally, the Zimbabweans were to be told that Britain was attempting to “take prophylactic action” in Pretoria. “However, we cannot be sure that we will succeed.”

What was this all about?

The South African “agents” in Chikurubi, Harare’s maximum security jail, were part of an SADF team that had been sent into the country by the Civil Co-operation Bureau. Despite its innocuous name, the bureau controlled Pretoria’s notorious cross-border attacks against the African National Congress and other liberation movements, who were operating in South Africa’s neighbouring states.

The five, Michael Smith, Kevin Woods, Barry Bawden, Philip Conjwayo and Rory Macguire had been captured during attacks on an ANC house in Bulawayo, during which a taxi-driver was killed. The attempt to free them, code named Project Direksie, was timed as they were being transferred to court. South Africa’s Truth and Reconciliation Commission later reported that: “The plan was aborted at the last minute when the South Africans became aware that the Zimbabweans had advance information on the attempt.”

The British intervention had done the trick.

The telegram is just one document from a thick file of the Prime Minister’s correspondence just released by the National Archive in Kew. Covering the period 1 May 1980 to 22 August 1991, most are from Margaret Thatcher’s time in office, with a few from her successor, John Major. These documents reveal – despite the cool tone of the official notes and memos –just how friendly and convivial the relationship between Thatcher and Mugabe really was. 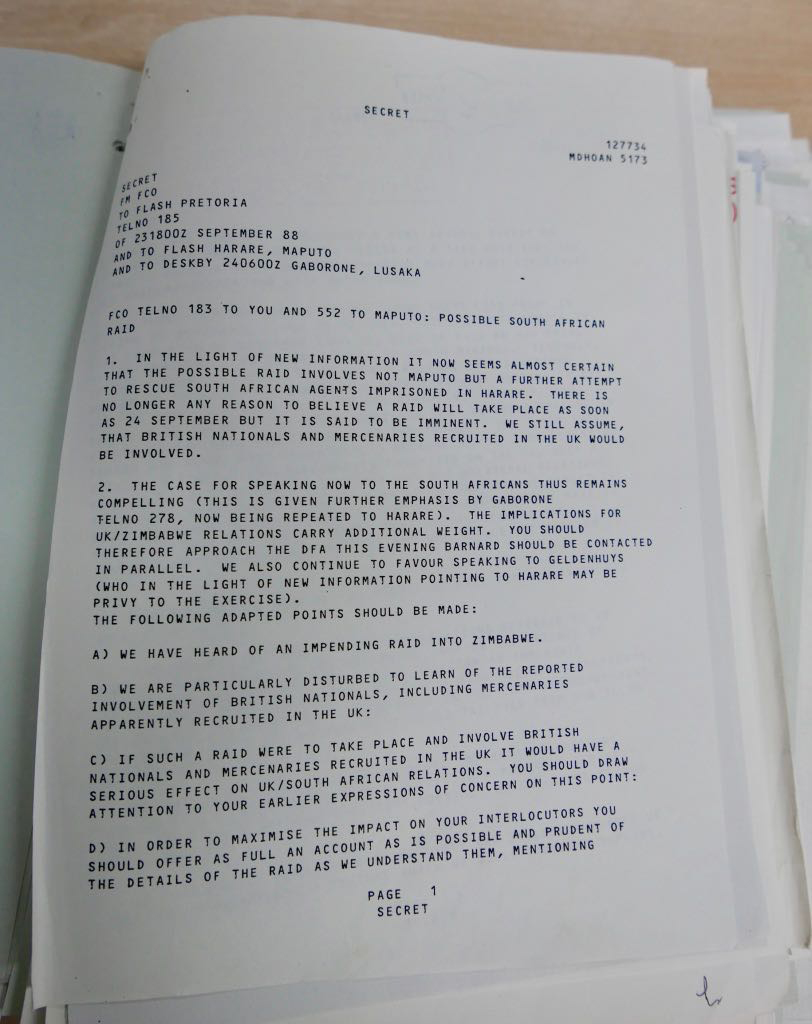 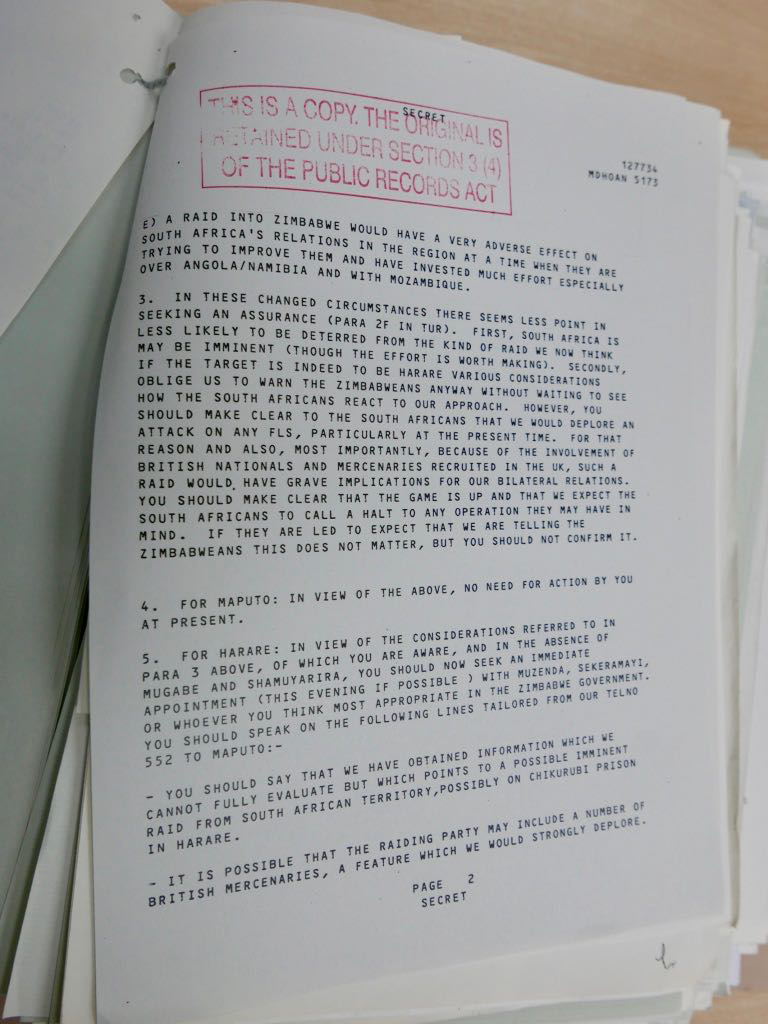 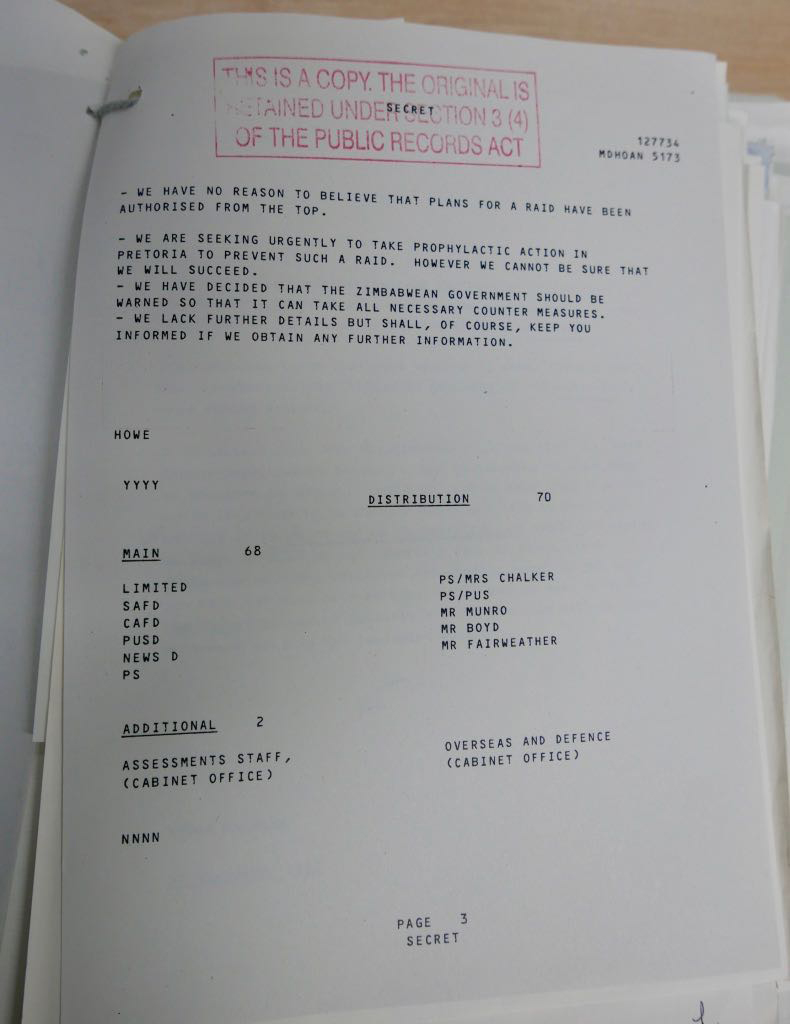 On 1 October 1988 – shortly after the aborted raid on Harare – Thatcher entertained the Zimbabwean leader at Chequers (the Prime Minister’s country retreat). They held lengthy “almost gossipy” talks in what was described as an ‘excellent atmosphere’.

Both leaders were determined that their bilateral relations should not be adversely affected by public disagreement over policy towards apartheid South Africa. Thatcher expressed her disappointment at how little progress had been made, despite “constantly” trying to bring home to President PW Botha the risks he faced in not acting, and the need to free Nelson Mandela.

Mugabe agreed, saying that “constant pressure” was needed and asked whether Thatcher might consider a visit to the country since he believed Botha would listen to her. Thatcher confirmed that she would continue to send messages to the stubborn South African president but didn’t feel the time for a visit was right, since insufficient progress had been made on abolishing apartheid. Mugabe also told the Prime Minister he “hoped very much” she would take up his invitation to visit Zimbabwe in the coming months, but Thatcher only committed to looking at her diary.

According to the files, Mugabe met the British Prime Minister whenever he was passing through London. There are no fewer than 11 visits recorded, from formal receptions to informal chats. It was only in November 1983 when the Commonwealth was meeting in Delhi that the two leaders had anything that could be described as a prickly encounter.

In Delhi, Mugabe was frank about his deteriorating relationship with his former nationalist rival, Joshua Nkomo. He accused Nkomo of “bitterness” at losing the first post-independence election in 1980, and of having “broken ranks,” receiving military equipment from the Soviet Union after the election, including SAM 7 surface to air missiles. Mugabe accused his rival of purchasing 25 large farms to store weapons and act as training bases. And – he said – they had “deliberately” not integrated their “crack troops” into the new army the British were helping Zimbabwe build. This was – according to Mugabe – the “zero-hour” plan: an attempt to overthrow his government. It was Mugabe’s explanation for the ruthless repression in Nkomo’s heartland of Matabeleland in the 1980’s during which tens of thousands were killed.

Mugabe was particularly incensed at British political and media criticism of the detention and torture – something he strongly denied – of six white Zimbabwean air force officers. He furiously declared he would not accept direction from outside of Zimbabwe. Furthermore, it was unwarranted: he had been on the point of releasing three of those in detention.

Despite her later public image of intransigence, Thatcher was capable of considerable charm. She explained, almost apologetically, the pressure she had come under from the press and from her own party in parliament, asking Mr Mugabe to understand. She referred to him as “a religious man” of integrity.

“Everyone who knew him knew that he was incapable of corruption and everyone who met him thought highly of him.” Rather grudgingly, Mugabe accepted her explanation and she promised to find a new formula for raising such issues in public.

Apart from that brief, intense, confrontation, it is clear that the Thatcher-Mugabe relationship was generally cordial and even friendly, a respectful relationship between leaders: a far cry from the public perception of a difficult, frosty confrontation between ideological rivals. DM