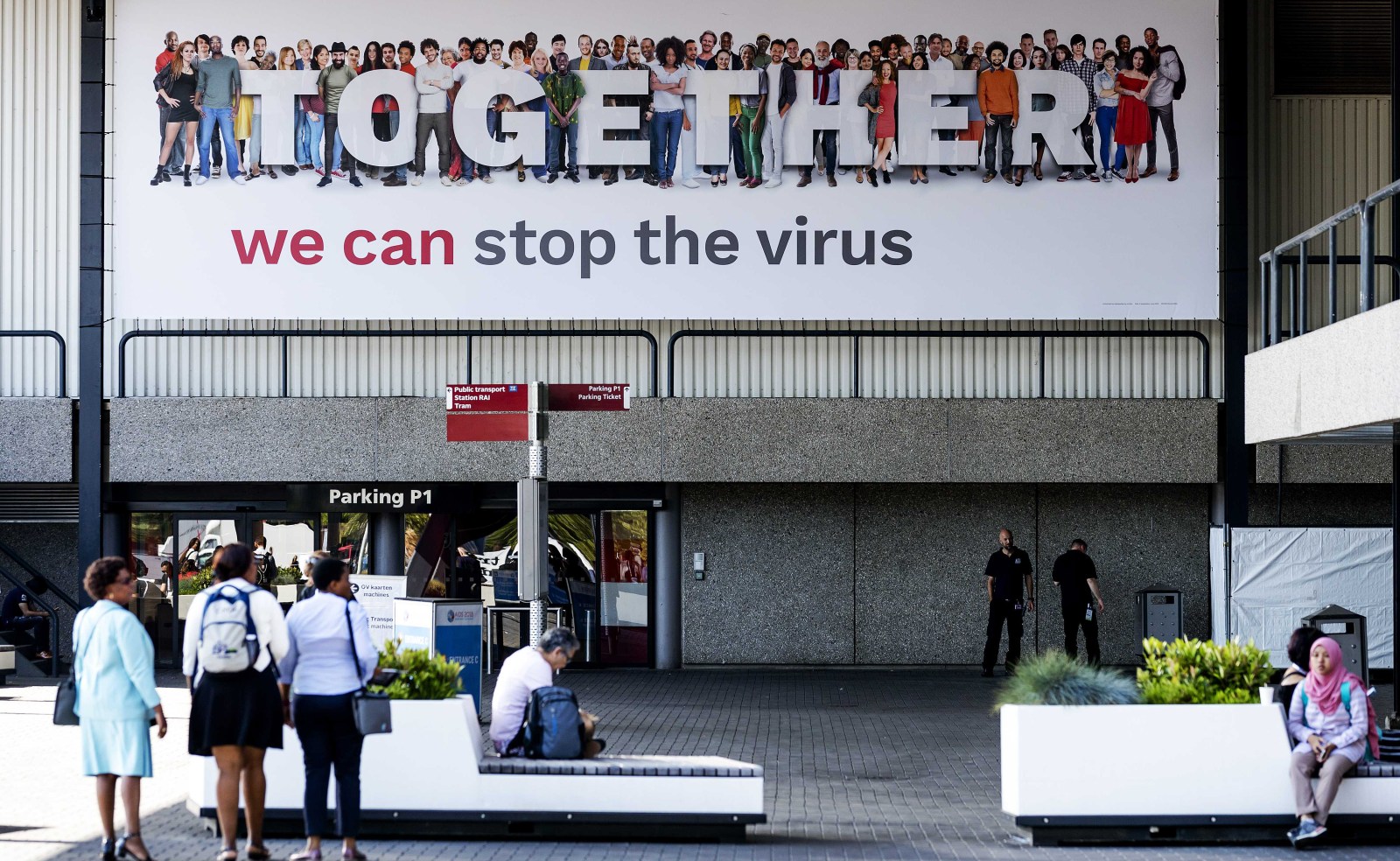 Photo: A banner with the slogan 'Together we can stop the virus' welcomes the participants of the 22nd International AIDS Conference 2018 at the RAI Convention Center in Amsterdam, The Netherlands, 23 July 2018. The biennial conference that runs from 23 to 27 July 2018 is organized by the International AIDS Society (IAS) and is expected to welcome around 18,000 participants - including researchers from various disciplines, medical professionals, public health and community practitioners and policy planners - from all around the world. Photo: EPA-EFE/ROBIN VAN LONKHUIJSEN

Two years ago, we welcomed the world to the International Aids Conference in Durban, South Africa. At a march of 10,000 people we held up banners proclaiming that 20 million people still need treatment. At that conference we said to the world that Aids is not over – and indeed, the misguided rhetoric about the end of Aids has now given way to more sober, more realistic assessments. The reality is that we are still in the thick of it.

In South Africa, as in many other countries, the first phase of the global Aids response was a fight for policy. It was a fight for the idea that governments have a responsibility to do whatever they need to do to get HIV treatment to the people who need it. In our country it involved various court cases and a fight against Aids denialism. Around the world it required a massive effort by activists, researchers, diplomats, progressive business persons and willing governments. Our shared success is something to be celebrated.

That said, the victories of this first phase of our struggle against HIV has to be won again and again. We cannot take the recognition of the human rights of all people for granted nor can we take the affordability of medicines for granted. As we hear reports of plans to shut down UNAids without any public consultation, we can’t take even United Nations support for granted. As we know too well, we can’t take continued political will or funding from our governments for the Aids response for granted either. All this work from the first phase of the Aids response must continue and we must support each other in it.

Almost everyone agrees today that we need to provide prevention, treatment and care to all who need it. The wide adoption of the 90-90-90 targets are testimony to that consensus. We have reached a point in the Aids response where the question is not so much what to do, but rather how to actually get it done given the state of our health care systems.

We now know that policy victories and innovative technical interventions can only take us so far. In South Africa, and in many other countries, the Aids response has come up against a wall. This wall is the widespread dysfunction in our health care systems. It doesn’t matter how good our donor-written policies are if they are never implemented. It is no use if we have medicines in depots, but the medicines never reach the people in the clinics. Beautiful guidelines for treatment and care mean little if we refuse to employ health care workers to actually provide the treatment and care.

As TAC we we are very clear: Our struggle against HIV is now in a new phase, a phase where our fundamental struggle is against dysfunction, mismanagement and corruption in our public health care system.

This new phase of our struggle is, in its way, much harder than the struggles against Aids denialism and profiteering pharmaceutical companies. There are fewer victories to be had in laws or in policies. The problems we face are much more diffuse and harder to influence. Meetings in board rooms in Geneva, New York or Amsterdam matter less in this phase of our struggle, while community meetings in Lusikisiki and Khayelitsha matter more and more.

Our recent monitoring reports on seven of South Africa’s nine provinces paint a very bleak picture. In these and in our previous reports, it has become clear that TB infection control measures are grossly deficient in many facilities – turning many clinic waiting areas into likely transmission areas. Our diagnosis of widespread dysfunction in public sector facilities is confirmed by devastating reports from the Office of Health Standards Compliance (a statutory health inspection body that reports to parliament).

The crisis in many of our public facilities does not come from nowhere. Over the last decade, on the watch of former President Jacob Zuma, corruption has flourished in South Africa and the public service has been systematically hollowed out. This has directly impacted the health care system and the Aids response.

It is worth recounting some details. Recently it emerged that millions ear-marked for HIV in the North West province was looted to pay overinflated prices to a controversial ambulance company that is now the subject of police investigations. This is while over 200,000 HIV treatment eligible people in that province are not yet on treatment.

In the same province strikes resulted in the shut-down of the public health care system, a shut-down that meant medicines distribution stopped completely for weeks on end. Some shared treatment with others, others paid high prices in private pharmacies, many simply defaulted. These strikes, and a similarly disruptive strike at a Gauteng hospital, suggest that more health care workers are now prepared to strike in ways that place patients at risk. It tells us that the ethos of public service has dangerously eroded.

Of course, there are still many good people trying to do their best within a failing system. The tragedy though is that there is so little help for them. While some politicians come when there is a strike or a protest, they generally show little interest in fixing the underlying problems plaguing the system. Indeed, many officials in provincial departments of health have been appointed for political reasons or with corrupt motives and have neither the inclination or the ability to start turning the system around. And even with Jacob Zuma gone, the balance of powers in the ANC is such that many corrupt and under-performing persons remain firmly in place.

Part of why Cyril Ramaphosa is now President of South Africa is a deal he made with David Mabuza, the former Premier of Mpumalanga province and now Deputy President of South Africa. Mabuza has generally been associated with some of the more unsavoury characters in the ruling party and on his watch Mpumlanga politics was mired in alleged corruption. As Deputy President Mabuza is also now the new head of the South African National Aids Council, a body already ridden in controversy over the way it removed its former CEO and its failure to deal decisively with conflicts of interest. While Premier in Mpumlanga and chairing that province’s provincial Aids council, Mabuza failed completely to address that province’s severe HIV crisis, not to mention the general corruption of that province’s government.

That Mabuza is now making some of the right noises on HIV and TB is of course welcome and we will hold him to his words. That our government has finally approved a progressive new policy on patents and medicines 17 years after the Doha Declaration is also welcome. That our Department of Health has shown urgency in introducing new medicines such as bedaquiline for MDR-TB and dolutegravir for HIV is to be applauded.

But, as Minister Aaron Motsoaledi recently admitted, South Africa’s health care system is in crisis. From our national department he has tried to stop the crisis, but in South Africa the health care system is run by provinces and Motsoaledi has been powerless to get the provinces into line. The underlying reality is that inside the borders of South Africa, our internationally popular Minister is severely hamstrung by his lack of political power.

Ultimately, as with all the issues we faced in the first phase of our struggle, the second phase is also fundamentally political. And as we have to address the patronage networks within our ruling party in South Africa, we call on our international allies to address the distorted values of the current United States administration and to seek out again the international solidarity that made our movement as successful as it once was.

As the world gathers in Amsterdam for the 22nd International Aids Conference, my appeal to you is to once again make Aids political. Just like the gag rule and Global Fund withdrawal is political, the failure in my country to act against corrupt individuals is political. The potential shut-down of UNAids and the mishandling of sexual harassment at the agency is political. In recent years we have too often played nice with our elected leaders and as a result they have come to believe that Aids is almost over. We must once again take the gloves off and make Aids political. We have elected our leaders, we demand that they deliver the Aids response and the health care systems we need. DM

Anele Yawa is the General Secretary of TAC (the Treatment Action Campaign). TAC is a South African membership-based organisation that advocates for the rights and interests of people living with and affected by HIV and TB