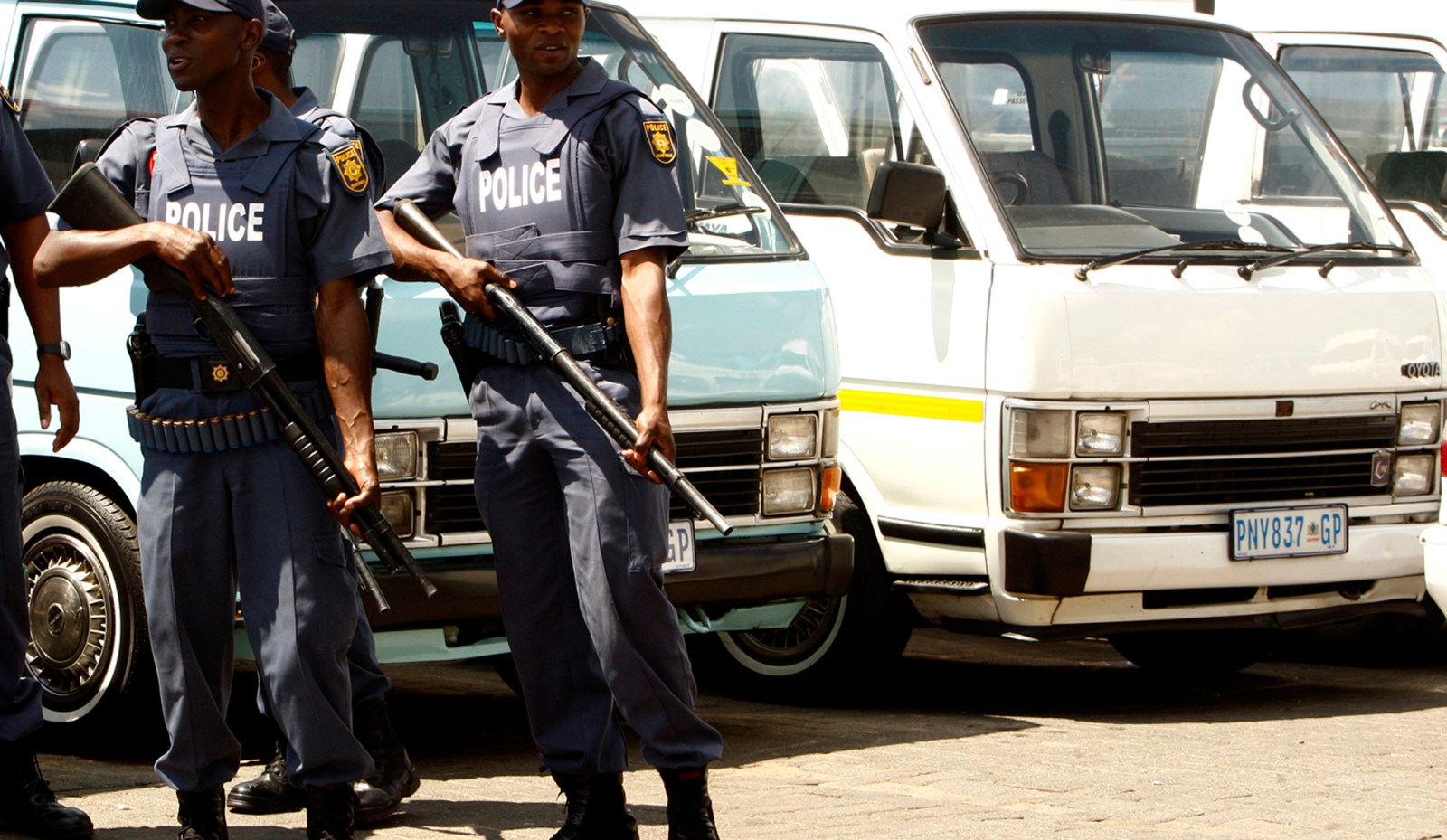 Police officers stand guard during a protest by taxi operators against the roll-out of the latest phase of Johannesburg's Bus Rapid Transit (BRT) in Soweto March 15, 2010. REUTERS/Siphiwe Sibeko

The killing of 11 taxi drivers in KwaZulu-Natal this weekend has brought renewed calls to tackle the long-term crisis in the industry. Yet there are no easy answers, only an urgent need to reform.

The brutal killing of 11 people in KwaZulu-Natal on Saturday follows a familiar pattern of violence in the industry. The drivers – associated with the Ivory Park Taxi Association in Gauteng – were returning from a funeral when gunmen fired 250 bullets at their vehicle on the R74 between Colenso and Weenen.

Police are still investigating and SAPS National Commissioner General Khehla Sitole has announced a 72-hour action plan involving specialised units to find the perpetrators. The murders are believed to be related to three killings that occurred in Ivory Park, near Thembisa, Gauteng, two weeks ago when a local taxi owner was attacked at the Swazi Inn.

Despite the gruesome nature of the killings and the number of deaths in this case, unfortunately this is nothing new in the taxi industry.

The sector has a long history of violence that neither industry associations, the police or government have been able quell. Competition for profitable routes remains high, regulation is difficult to enforce, and the sector maintains the same links to criminal syndicates it has in the past. hitmen rather than arbitrators are often used to resolve problems.

Over a dozen people were killed in the Western Cape as taxi bosses went to war between April and June. Two people were killed from the Alexandra, Randburg, Midrand and Sandton Taxi Association in July and another injured. In June, an owner and a marshal were killed at Diepsloot taxi rank. Multiple taxi killings have been reported in KwaZulu-Natal’s Umbumbulu in recent months.

“The incidence of last night is a further indication that violence in the taxi industry has now reached crisis levels in the country and a multi-sectoral intervention strategy must be implemented to effectively deal with this scourge,” said Francois Beukman, chair of Parliament’s portfolio committee on police, on Sunday. He blamed the proliferation of firearms.

“These killings and injuries of innocent people are symbolic of organised crime and utter disregard of the life of other citizens. Such offences are serious crimes, unjustifiable and punishable by law.”

Police Minister Bheki Cele has in the past suggested shutting down taxi ranks and associations that are marred by violence. It’s been done in 2018 in Gauteng and KwaZulu-Natal, but doesn’t address the long-term issues.

In the latter part of apartheid, attempts to regulate the industry were scrapped in favour of a market-driven system. Competition flourished to transport passengers between areas defined by their separateness under apartheid’s plans of spatial geography. Taxi associations formed to protect profits, through violence if necessary .

The crisis has ebbed and flowed during democracy. Taxi violence and corruption became the norm and government’s efforts to formalise the industry have largely failed. The sector is worth around R40-billion annually, transports 15-million commuters a day, and has between 150,000 and 200,000 taxi owners. Owners and associations are divided and often willing to fight for turf.

Azwi Netshikulwe, from the University of Cape Town’s Safety and Violence Initiative, has studied issues of taxi violence and on Monday noted the key challenges. He said fighting over routes is a key cause of violence, as well as corruption between state officials and taxi bosses.

He said hitmen are often brought into the industry and then want to own taxis. The introduction of security guards is also problematic because many of them are, or were, hitmen.

“Law enforcement officers seemed to have viewed the operations of the taxi industry as normal and ceased to regulate them formally except taking bribes.

“My fieldwork research suggests that the industry provides a system in which hitmen are nurtured, providing a source of violence for taxi bosses and for other buyers who want someone to be eliminated,” he said.

Police officers have been accused of being supporting violence and overlooking those who transgress the law or being involved in the taxi industry as investors. The government has been accused of corruption, issuing new licences to taxi operators who don’t meet regulations and assigning them routes they don’t deserve, which sparks violence.

Clement Doncabe from the SA Public Transport Workers Union (Saptwu) said drivers are targeted as the government fails to improve the industry and associations fight among themselves.

“The key thing that the government does not recognise the taxi industry as a business,” he said, calling for formalisation.

He suggested government should further get involved in formalising the industry and provide more subsidies so the taxi sector was treated more like a public transport system than the cut-throat capitalistic system that currently prevails.

“If our government is not intervening in the taxi industry there will always be this thing of violence,” said Doncabe.

While the state has been aware of the challenges and the need to formalise the industry, its efforts have failed. The Taxi Recapitalisation Programme, which offered subsidies for taxi owners to upgrade their vehicles, was effectively an effort to register taxis, but it failed from the beginning to get industry buy-in.

“This is pure thuggery. This is pure criminality,” he said, claiming government is working on a multifaceted approach with ministers in the justice cluster to address the issue. But police and crime intelligence are unlikely to address the underlying causes of violence.

Mnisi said draft changes in the law, currently with the National Council of Provinces, would see taxi subsidies increase and the recapitalisation project improved as the department focuses on its long-term project of building public transport options.

He emphasised that the key driver of competition between taxi owners, which leads to challenges on routes, is the high cost of finance they must pay for their vehicles. He said private credit lenders must help reduce the costs while government also focuses on clarifying licensing issues between the different spheres of the state.

The new laws might help combat the violence but government has often been stuck in the same story. The industry is resistant to regulation and formalisation and enforcement attempts are met with protests, which can shut down the economy. Government’s own officials are often not on board, either stuck in their own policy failures or in the pockets of taxi bosses. DM