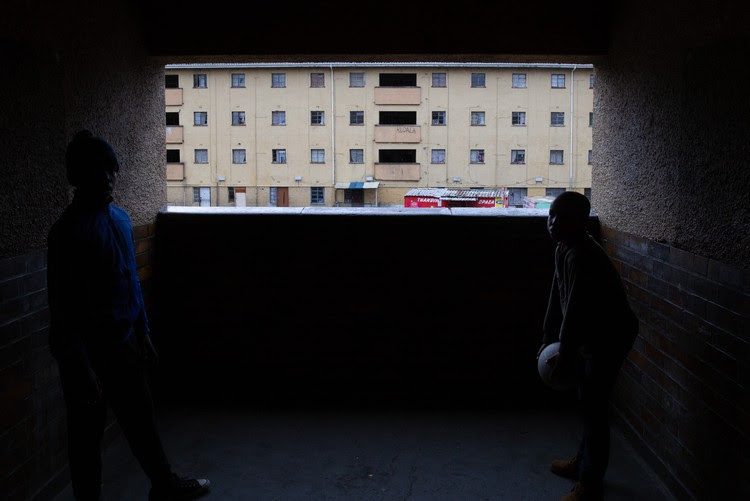 Photo: Residents pay R20 a month to the City of Cape Town in Block C, a former hostel in Langa. All photos: Ashraf Hendricks

City says it will spend R147-million on upgrades to the rental units it owns. By Mary-Anne Gontsana and Thembela Ntongana for GROUNDUP.

The City of Cape Town owns approximately 50,000 rental units. Some were built in the 1940s. GroundUp visited five homes of people who are living in rental units in Parkwood, Lavender Hill and Langa.

In July, the city announced it will spend R147 -million over two years to upgrade a number of its council rental units across the metro.

Margaret Hermanus has been living in the same flat for 23 years. Now 61, she shares her two-bedroom flat in in Blackbird Avenue, Parkwood, with 11 other family members.

Her rent is R300 a month and she is in arrears. Her flat is on the top floor and the roof of the block leaks. Her ceiling is rotting. The putty in the window frames is falling out. Her toilet leaks on the floor. The walls are cracking. But she keeps the flat clean and tidy.

“If you want the city to fix something you must wait for years before they come fix it and when they do the job it’s half done. I complained for nine years for them to come and fix the door which would not close because the door frame and wall was broken and cracked, and only last year it was fixed,” said Hermanus.

“They paint the flats outside once every few years and they do not paint all of them and say that is all they have money for. Most of us here do not work and cannot afford to fix some of the things,” said Hermanus.

Stephanie Conning also lives in Parkwood in a dark top-storey flat in Parkers Walk. She shares the council flat with four family members. Her daughter pays the R400 a month rent.

Conning says she has been living in the flat for 15 years. Bricks from the wall in one bedroom have fallen out leaving a big hole above the door frame. She has no electricity in her flat. When she moved in the electricity box was gone.

“We use candles and a gas stove. We also don’t have running water in the house. We have to go and get water from the tap outside downstairs,” said Conning.

A few kilometres away from the Langa taxi rank is Block C council flats. A giant, bright mural of struggle heroes Philip Kgosana and Robert Sobukwe adorns the main entrance. From the outside flats appear to be in a poor condition and many windows are broken.

Limise Mbilini lives in a tiny flat on the first floor. She has lived here for seven years and pays R20 a month rent to the city.

When GroundUp visited there was only one light working in the long passage she shares with 30 units. The units share just four toilets. An unbearable smell came from them. Mbilini says the city does come when they are called to fix things, but they have been struggling for three months to get the city to unblock the toilets.

Sally Marcus lives with her six grandchildren in a two-bedroom flat in Ashley Court, Lavender Hill. Her rent is R300 a month, but she is a few months in arrears. She has lived in the council flat for 20 years.

She has been struggling with a leaking toilet pipe. “If you get a flat here you fix it yourself,” said Marcus.

She says she wants to move because she can’t cope with the crime in the area. Her daughter was injured when she got caught in crossfire between gangs.

According to the city’s website, the tenant’s role and responsibility with regard to maintenance is regulated by the lease agreement, which stipulates that it is the tenants role to maintain the inside of the dwelling. The city may at the tenants expense make internal repairs if necessary.

The city also says tenants “shall pay the cost of replacing any broken windows and of repairing any damage done to the property other than that arising from ordinary and reasonable wear and tear”. The city “shall be responsible for all reasonable external repairs only”. 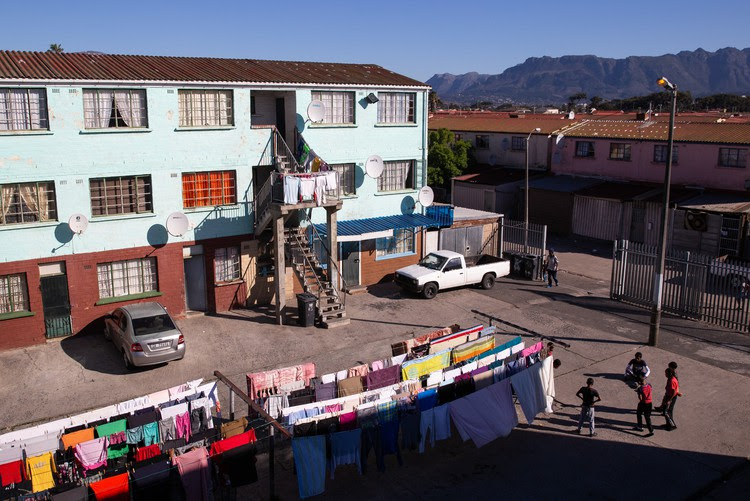 He said the upgrades would focus on critical elements such as the external surfaces, structural integrity and water ingress. This would include “replacing windows, installing geysers, repainting surfaces, replacing gutters and repairing roofs”.

“The city has rental units throughout the metropole and a phased-in approach to the upgrades will be followed. Upgrades have started or are near completion in Atlantis, Ottery, Hout Bay and Albow Gardens,” said Diamond.

Diamond said the rent collection rate from tenants living in council properties/flats for June 2018 was 36%.

“Rental is determined on the size of the unit and various conditions which includes, among others, geographical location that can either add premiums or deductions,” said Diamond.

“There is a surcharge for those earning more than R3,500 per month and rental can be discounted for those earning less than R3,400 per month … Tenants can apply for indigent relief and pay a discounted rental which is reviewed on a 12-month basis. The grant is valid for 36 months for persons over 60 years of age. The minimum rental is R10 per month with a further R10 arrangement if there are arrears on the account.” DM