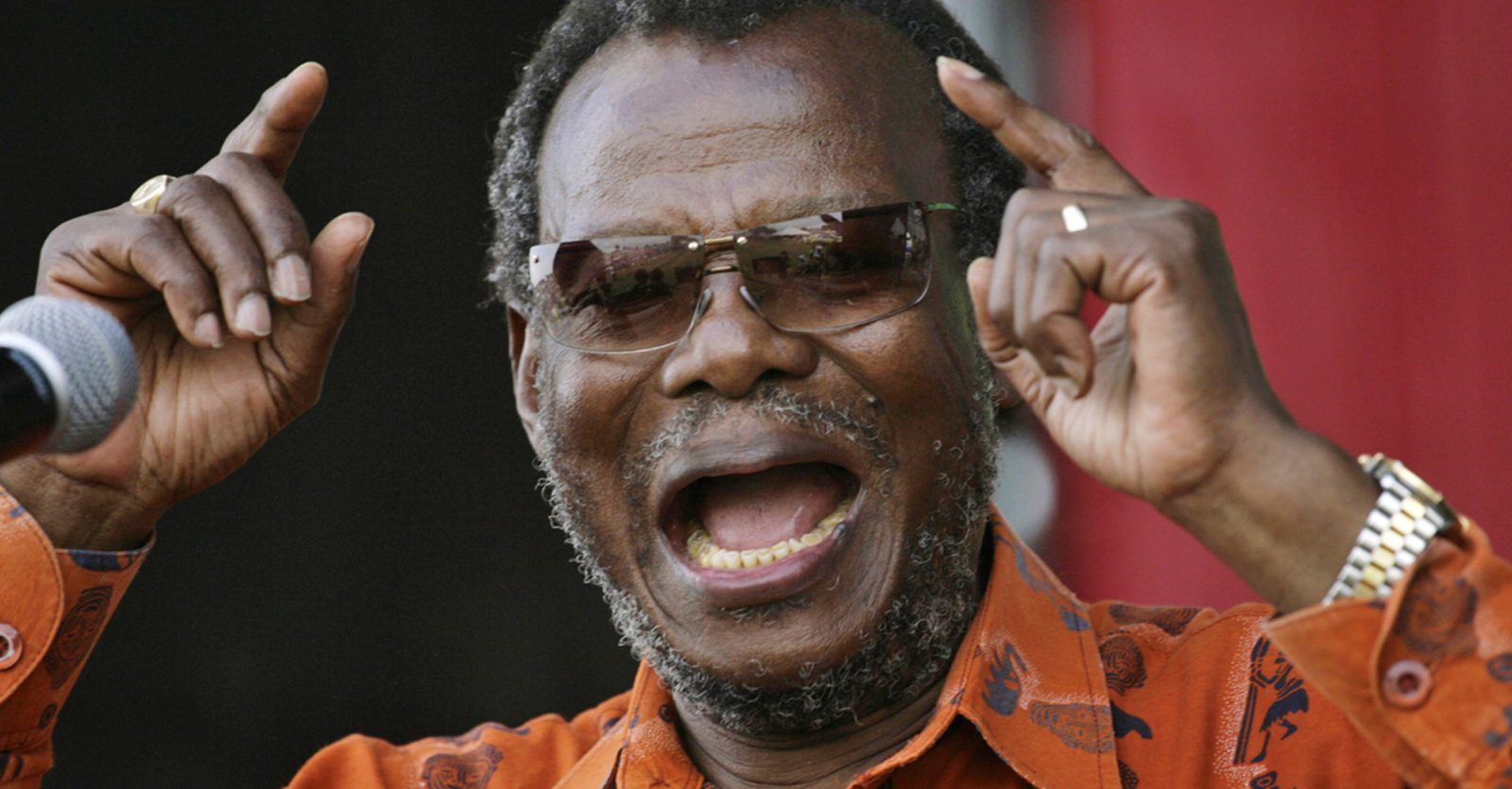 By careful omission and deliberate lies, Dr Oscar van Heerden builds an entirely false and damaging case against the IFP in an article titled “A monarchy that makes a mockery of our Constitution” (Daily Maverick, 11 July 2018).

Dr Van Heerden himself calls the constitutionally recognised institution of traditional leadership “outdated and historically backward”. He accuses the Zulu King of being an abusive criminal. And he claims that legislation which has been legitimately in place for 24 years, which has been amended by a democratic Parliament and recognised by the Constitutional Court, is “unconstitutional” – because Mr Motlanthe says so.

But let me start with his lies about the IFP.

He claims that through the apartheid security apparatus “Inkatha Freedom Party fighters were being trained just like the Koevoet soldiers” on “how to kill”. For the umpteenth time, here is what really happened.

In the late Eighties and early Nineties, intelligence reports were constantly being received of assassination threats against me and my ministers in the KwaZulu cabinet. There were repeated threats that the buildings of the KwaZulu government would be bombed or burned. These were the tactics used by Umkhonto weSizwe, the armed wing of the ANC.

The IFP had no armed wing, for we rejected violence as a political strategy or a tool of liberation. It was our refusal in 1979 to allow the ANC’s mission-in-exile to use IFP structures to channel guns and guerilla soldiers into South Africa that created a split between the ANC and IFP. After that, the ANC launched a vicious campaign of vilification against us, and their people’s war was turned against the IFP, which saw the beginning of black-on-black violence.

I therefore sought guidance from Pretoria. Their response was that 200 men would be trained in KwaZulu-Natal as VIP protectors, and that is what happened.

It was from this single incident that the infamous propaganda sprang that the SA Defence Force was training IFP fighters to kill members of the ANC. I have always wondered how 200 VIP protectors could possibly have taken on the army of well-organised, heavily armed and highly trained guerilla soldiers of Umkhonto weSizwe.

But that’s propaganda for you. And it became entrenched in the minds of journalists and academics.

Dr Van Heerden slyly adds the sentence, “Branded T-shirts openly stated: ‘Killing is our business and business is good’.” He is referring to the T-shirts worn by Koevoet soldiers, not to T-shirts worn by anyone in the IFP. But he doesn’t make that clear.

His subsequent description of what happened at Shell House in 1994 is also carefully crafted to make it seem as though IFP supporters attacked Shell House, carried firearms and killed ANC members. But none of this is true.

The march past Shell House was organised by supporters of His Majesty the King. Those who witnessed it on the streets reported on the peaceful nature of this march, on how it was organised and disciplined. There were no firearms and not a single shot was fired by the marchers.

Indeed, in 24 years of research and investigation, no one has ever claimed that the marchers had any intention, or means, of attacking Shell House.

Years later, in the National Assembly, President Nelson Mandela admitted that he himself had given the instruction inside Shell House to open fire on the marchers. He had to live with that regret, for those who lay dead at the end of that terrible day were all innocents. Not a single ANC member was injured or killed.

Dr Van Heerden, who was inside Shell House at the time, recalls the “military precision” with which “guns were handed around” inside Shell House and “bullets started flying”. But he doesn’t mention that the marchers were unarmed and unable to defend themselves. He only questions why the police, “caught completely off guard”, couldn’t decide whether to shoot the marchers, or shoot those who were firing at them. The question is fairly absurd.

The people who received amnesty from the Truth and Reconciliation Commission for what Dr Van Heerden calls “this unfortunate event” were all ANC.

Having laid this false foundation, he then rewrites history completely, claiming that the IFP rejected democracy and “refused point blank to be on the ballot paper” until a deal was struck to give millions of hectares of land to the Zulu King.

The IFP was at the forefront of the struggle for democracy for decades. When the National Party government finally realised that apartheid could not survive, President de Klerk approached me to begin bilateral negotiations towards democracy.

I could have engaged him, and become South Africa’s first black president. But instead I insisted that Mandela and other political prisoners first be released, that exiles be allowed to return home, and that everyone be welcomed at the negotiating table, so that democracy could be ushered in through democratic negotiations.

In a glaring omission, the King of the Zulu Nation was then barred from the negotiating table. As the traditional Prime Minister to the Zulu Monarch and Nation, I could not accept that millions of black South Africans were denied representation in negotiations. Had the Zulu nation not fought the Anglo-Zulu War? Had our King not been imprisoned and driven into exile by foreign interlopers? Had colonialism not dispossessed us of our land?

At the Skukuza Summit it was agreed that international mediation would be convened to resolve the issue of the Zulu monarch. But when the mediators arrived, Mr Ramaphosa and Mr Roelf Meyer sent them packing. It was then that the IFP withdrew from the imminent elections, for negotiations were no longer proceeding in good faith.

A deal was then struck; but not the deal Dr Van Heerden claims.

On 19 April 1994, just days before the elections, Mandela, De Klerk and I signed a Memorandum of Understanding according to which the IFP would participate in the elections on the basis of a commitment that international mediation would be convened immediately after elections to resolve outstanding issues.

Never once was land mentioned, either in discussions or the MOU, because land was never part of that debate.

A few days later, as the IFP campaigned for elections, the KwaZulu Legislative Assembly (KLA) passed its last piece of legislation: the Ingonyama Trust Act.

The KLA was well within its rights to pass this legislation. It neither needed nor sought permission from the National Party government. So the Ingonyama Trust never featured in negotiations.

The Act was intended to maintain the last bits and pieces of land left to the Zulu nation after colonialism and racial dispossessions, as communal land, for use by the people. In the absence of this Act, all the land on which we lived, farmed and raised our children would have automatically been owned by the State.

Has the State given us a shining example of how well it administers land? If it was doing well, the calls for expropriation without compensation and radical reform would never have arisen.

Of course, when the ANC realised that this land was not among their spoils, they were not happy. They insisted that the Act be brought before the KwaZulu-Natal Legislature and Parliament, and it was. It was comprehensively debated and finally amended to the full satisfaction of every party. But what was never questioned, even by the ANC, was that the king has rightful authority over the land.

When President Ramaphosa met with the King and I recently, following an imbizo, he clarified the intention of the ANC and government, saying that land held under the Ingonyama Trust would not be taken by the State.

He didn’t “kneel down in front of the King”, as Dr Van Heerden claims. He came as our Head of State – and president of the ANC – to make a commitment to honour the constitutionally recognised institution of traditional leadership and the authority of the King.

Whether Dr Van Heerden likes it or not, the democracy we live under respects all our people, even the millions who support the Zulu King. DM