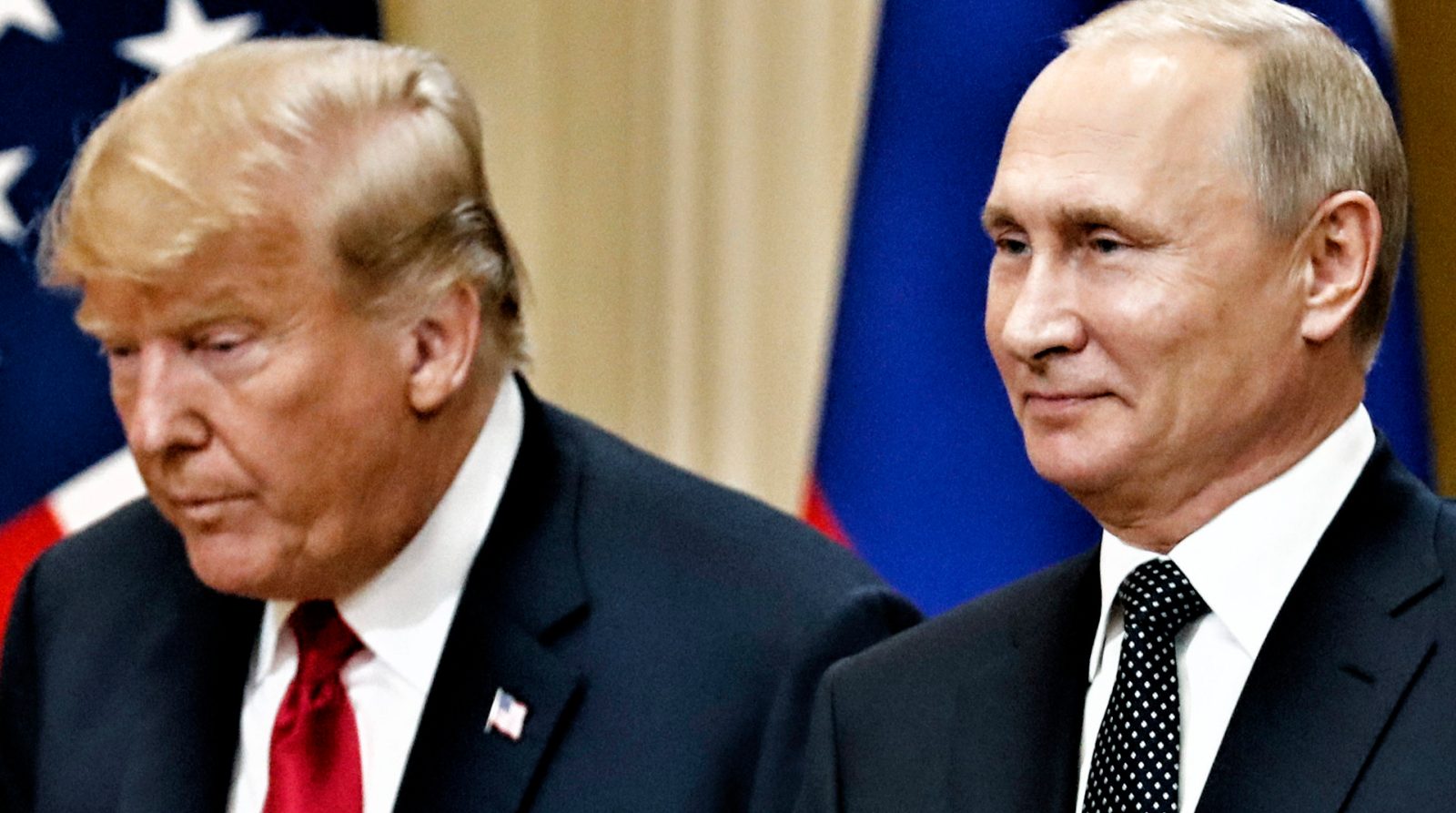 In the day after that astonishing, appalling, horrific, amazing performance by Donald Trump in Helsinki, the awful truth is settling in. Now what is to be done with Donald Trump after his textbook demonstration of an impeachable offence?

The uniquely tawdry spectacle of US President Donald Trump’s performance in Helsinki, Finland on Monday, in a media conference, together with Russian President Vladimir Putin, has been one of the most appalling political moments I have witnessed in my life. The man has turned his back on the country, its values, and the entire apparatus of government – in favour of a Russian version of Lewis Carroll’s smiling crocodile.

You know that bit of poetry:

How doth the little crocodile
Improve his shining tail,
And pour the waters of the Nile
On every golden scale!

How cheerfully he seems to grin,
How neatly spreads his claws,
And welcomes little fishes in,
With gently smiling jaws!

Now it is the time for something much more than just all that anguished howling and whingeing on a million Facebook accounts.

Yes, back in 1973-4, there was Richard Nixon’s long, tortured descent into a dreadful political Coventry. And yes, he and his team’s traducements of the country’s rule of law were horrific, but it all swirled out from a seemingly petty crime in an administration that was at least ostensibly law-abiding (unless you were a Cambodian). That is until it slowly revealed itself to everyone as a sustained assault on the very ideas of democracy.

But in Donald Trump’s case, we knew right from the very first moments of his presidency that something was seriously wrong. But, it seemed impossible to believe that a president – any American president – would so fully metastasise into something astoundingly shallow as well as something so deeply flawed and evil.

Evil. Yes, evil intentions (albeit without the skill to do much useful). Let us say that right out loud. And now this evil has saddened me so deeply, that words are not really sufficient to convey this feeling adequately.

In Richard Nixon’s agonies, most of us were eventually heartened by the truth that politicians on both sides of the aisle were prepared to believe the future of the republic was more important than a political party or president.

Moreover, the judicial system, sickened by what was being revealed, stood firm in insisting the right thing must be done, lest something truly terrible occur and the country be reduced to the sad status of a collapsed banana republic that had only the slightest simulacrum of the rule of law in effect. People went to jail for their misdeeds back then.

Some senior Republican appointees in office refused to take the easy way out and look the other way. Some of them were fired for their troubles, but they stood their ground as examples to the rest. Heretofore little-known congressmen and senators summoned the fortitude to object to that presidential arrogance and insisted the president must be stopped, even if it was, truthfully a very lengthy, hard slog. But much depended on it as Americans hung on every television and radio broadcast and reported-in-the-press word, back in that pre-internet age. And the denouement made us proud to be Americans – even as the final years of the Vietnam tragedy played themselves out. It was possible to fix real perversions of politics.

This time time around, things are worse. Much worse. Now we have a president who seems never to have learned the basic tenets of his own nation’s founding principles. As a result, he feels he can do whatever he wants, especially if it serves to enhance his family’s wealth somehow.

Reversing a decade of improvement in environmental protection and regulation and access to healthcare has become a goal, despite what it will do to the nation’s future. Pulling away from international agreements that had achieved small steps towards a less dangerous, less climatically threatened world will not help our children’s futures either. And moving on to ill-planned, small-minded protectionist trade wars will eventually harm the very people Donald Trump professed to embrace as “his” people.

While all of these policies were wrongheaded, they had not – at least, not yet – struck at the heart of that 200-year-old-plus American experiment. They have, however, turned the country in on itself in an effort to ignore the rest of the world, and to make the US appear to the rest of the world as a pinched and hard, beggar-thy-neighbour kind of place. Still, much of that harm could be reversed with some dedication, effort and energy, even if the country’s reputation has suffered grievously and its word is less trusted.

But what happened in Helsinki was different. This time, Donald Trump chose to wholeheartedly embrace a man and his government helots who had laboured stealthily to degrade the US political system via a vast panoply of surreptitious electronic means.

All of this was part of an effort to ensure Trump’s victory, something Putin as much as admitted during their press conference. Whether Trump’s minions actively and deliberately colluded in this effort or not is really immaterial. The clear result was that the one candidate, Donald Trump, had had an artificially enhanced chance at victory. Told by his entire government intelligence apparatus that this illicit behaviour was a concrete fact, Donald Trump then blithely waved all this away in public. He stood at a podium in a foreign land and accepted an antagonistic foreign leader’s word that, oh no, he hadn’t ordered any of this skullduggery and it was all just a pack of lies to wreck the burgeoning rapprochement.

Instead, Donald Trump refused to stand forthrightly in favour of the criticalness of unfettered, free elections – and the country’s core institutions and principles. And he spoke not one single word about the troubling Russian behaviour antithetical to American ideals and values. Just for starters, these include the forcible annexation of Crimea and other attacks on Georgia and Ukraine; shooting down a foreign passenger jet; locking up dissidents and many other Russian politicians; etc, etc, etc. He did, however, choose to praise that Moscow international football tourney.

This performance by a feckless, gormless president, uninformed by any acquaintance with history or an iota of knowledge about the country’s core ideals, simply accepted that reptilian smiling lie; acquiesced in the damage to the American political system; and let a blasé “nyet” from Vladimir Putin about any interference outweigh anything and everything else. This craven behaviour, becoming “Putin’s tame poodle”, has already disheartened millions and even made some Republican members of Congress who have been strong in his corner for every other indignity stand up, finally, and let their outrage come out publicly. Some Republicans are even quietly asking what, exactly, Putin and the Russians have on Trump?

But outrage is not enough. At the minimum, the Congress needs to pass a motion of censure over Trump’s deplorable performance, but the first steps towards impeachment or a heretofore supine cabinet declaring the disability clause of the 25th amendment to the Constitution in effect would be even better.

By now, there is more than enough evidence of the president’s clear violations of his oath of office to go around for pretty much any charge one wants to use. It just needs some political will to stop this mountebank from wrecking his nation. Watching his destructive, nihilistic path embarrasses and saddens me beyond anything I have ever seen in American politics. Ever. Someone now needs to act. DM