Parliament, in the eyes and words of Mandela

Parliament, in the eyes and words of Mandela 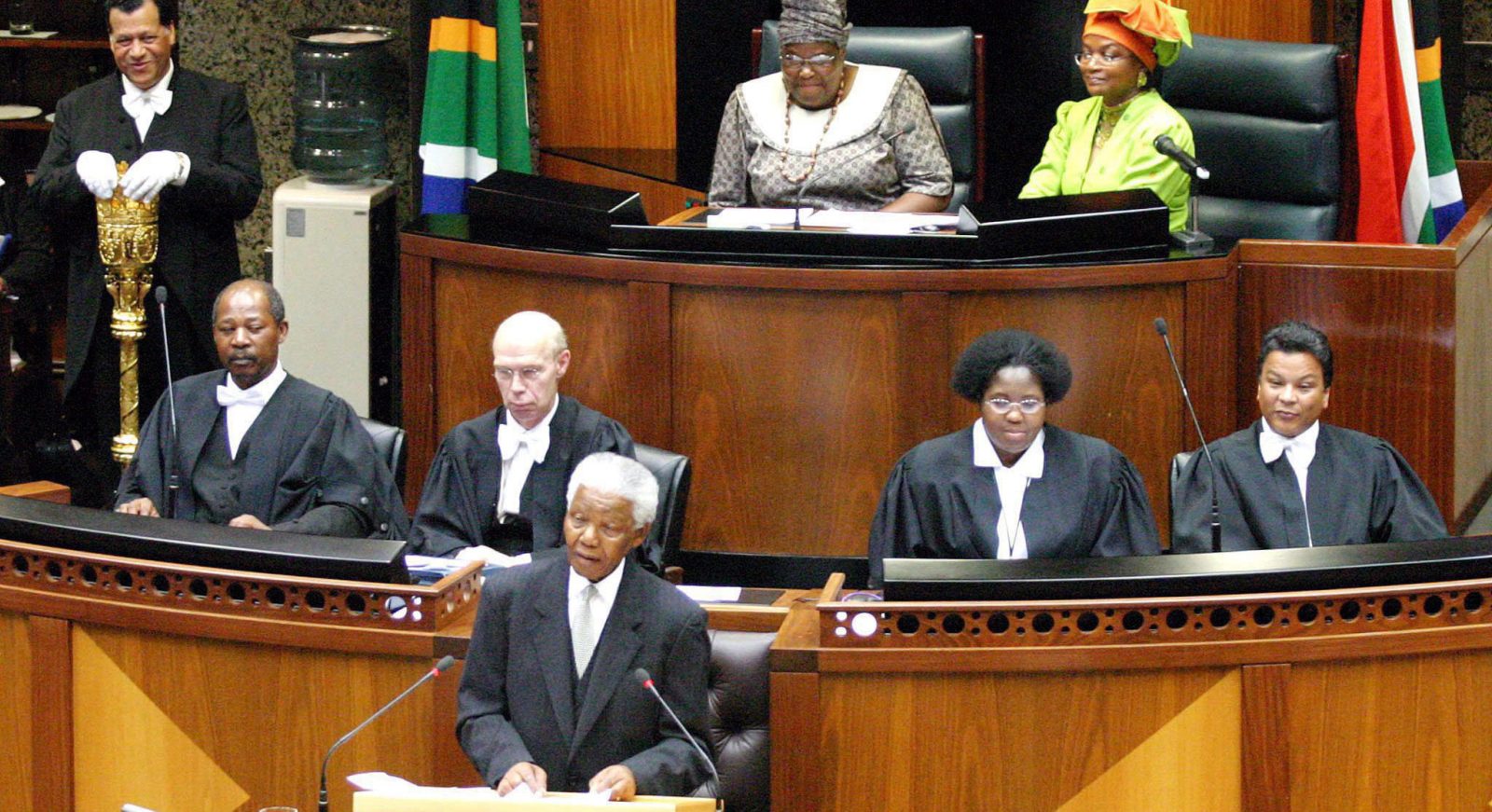 A bust of Nelson Mandela has stood in front of the steps of the National Assembly for just over four years now. It’s a reminder, or should be, of the role of the people’s Parliament that, according to Mandela, was where ‘the instruments have been fashioned to create a better life for all’.

When South Africa’s first democratically elected president, Nelson Mandela, bid Parliament farewell on 26 March 1999 ahead of that year’s elections, he told MPs it had been “a profound privilege to be accountable to this Parliament”.

It was the prevailing attitude because Mandela, according to many who were around then and still are today, had a deep respect for the national legislature. He, like the ANC, viewed Parliament as a central transformatory institution in democratic South Africa.

“Because the people of South Africa finally chose a profoundly legal path to their revolution, those who frame and enact constitution and law are in the vanguard of the fight for change,” said Mandela that day.

“It is in the legislatures that the instruments have been fashioned to create a better life for all. It is here that oversight of government has been exercised. It is here that our society in all its formations has had an opportunity to influence policy and its implementation.”

And Mandela also stood up against criticism that MPs were creaming it from benefits and perks, or the gravy train, as it was known.

“Questions have been raised, we know, as to whether this House is not a carriage on the gravy train, whose passengers idle away their time at the nation’s expense. To those who raise such questions we say: Look at the record of our Parliament during these first years of freedom…”

That track record was impressive, by any account. The Constituent Assembly met to draft the final Constitution, adopted in 1996 and signed into law by Madiba on 10 December that year at Sharpeville in honour of the 69 anti-pass law protesters killed in what is known as the Sharpeville Massacre. At the same time South Africa’s first democratic Parliament also got down to law making, passing on average 100 laws each year.

“These have been no trivial laws nor mere adjustments to an existing body of statutes. They have created a framework for the revolutionary transformation of society and of government itself, so that the legacy of our past can be undone and put right. It was here that the possibility was created of improving the lives and working conditions of millions,” said Mandela in his 1999 parliamentary farewell.

“Look at the work of the committees that have scrutinised legislation and improved it, posed difficult questions of the executive and given the public insight and oversight of government as never before…”

South Africa 2018 is a very different society and nation than South Africa 1994, or 1999 just before elections. But celebrating and commemorating the 100th anniversary of Madiba’s birthday provides pause for reflection.

Since 2014 Parliament each year passed an average of 17 laws, including the required financial Bills to give effect to the Budget.

Parliament in a series of cases has been taken to court over its rules, like the lacuna on motions of no confidence under Section 102 of the Constitution and the use of a secret ballot, and also over several laws it has passed. The Constitutional Court has had to tell Parliament to remedy legislation to, for example, ensure the real independence of the Hawks and the police watchdog, the Independent Police Investigative Directorate (Ipid) or to ensure teenagers aged 12 to 16 were not criminalised for consensual teenage sex as highlighted when officialdom initially charged the teenagers in the 2010 Jules High School sex saga with statutory rape under the Sexual Offences Act.

In the first democratic Parliament, optics were important to underscore the coming together of rivals in a government of national unity. And so leaders of all political parties got seats in the front parliamentary benches, as different traditions such as a dress code more flexible than collar and tie were started. The optics of what’s officially called the Fifth Parliament also have been important, but usually to highlight differences as do the red overalls and domestic worker overcoats of the EFF MPs.

The spectacle of politics in Parliament that has unfolded in the past few years has been bruising, quite literally, when EFF MPs were forcibly evicted from the House. There have been several controversies such as police, dressed in body armour, for the first time ever coming onto the floor of the House in November 2014, and the signal jammers debacle of the 2015 State of the Nation Address (SONA), the annual opening of the parliamentary calendar that has been disrupted in consecutive years.

On the political front tensions have remained at a steady simmer. As the ANC relied on its numbers in the House, opposition parties, be it the EFF or the DA, have loudly and repeatedly complained in their respective ways that Parliament has been subjugated to ANC factionalism in the scandal-ridden administration of then president Jacob Zuma.

Perhaps the most damaging to Parliament has been the Constitutional Court Nkandla judgment on 31 March 2016. The National Assembly was found to have acted “inconsistent with the Constitution” over its resolution absolving Zuma from any repayment for non-security upgrades at his rural Nkandla homestead. That resolution was invalid and set aside, as it amounted to substituting the public protector’s remedial action with Parliament’s own – and that “the rule of law is dead against”, according to the judgment.

There have been moments of Parliament stepping up to its constitutional oversight and legislative mandate. Not least the 2016 parliamentary inquiry into governance at the SABC, which in many ways contributed to the stabilisation at the public broadcaster, and more recently the inquiry into State Capture, particularly at Eskom, by Parliament’s public enterprises committee.

On 10 May 2004, Mandela returned to Parliament to address a special joint sitting to commemorate a decade of democracy after all political parties agreed to waive the rules for this “pensioner”, as Madiba described himself.

That day Mandela reminded MPs of the hope and confidence as South Africa had transcended divisions for an inclusive democratic society, while “not unaware of or blind to the extent, depth and gravity of the challenges ahead of us as we set out on that day to transform, reconstruct and develop our nation and our society.”

For this, Parliament, with its diverse range of public representatives, was important.

“Parliament is the voice of the people and you, the presiding officers, bear a heavy responsibility in ensuring that that voice is clearly heard in national affairs and that its role be protected and defended. Similarly, our congratulations to all the Members of Parliament in whom the nation has put its trust. Yours is the almost sacred duty to ensure government by the people under the Constitution.”

This statement by Mandela in the House in May 2004, about a month after that year’s poll, holds equally true ahead of the 2019 elections. DM