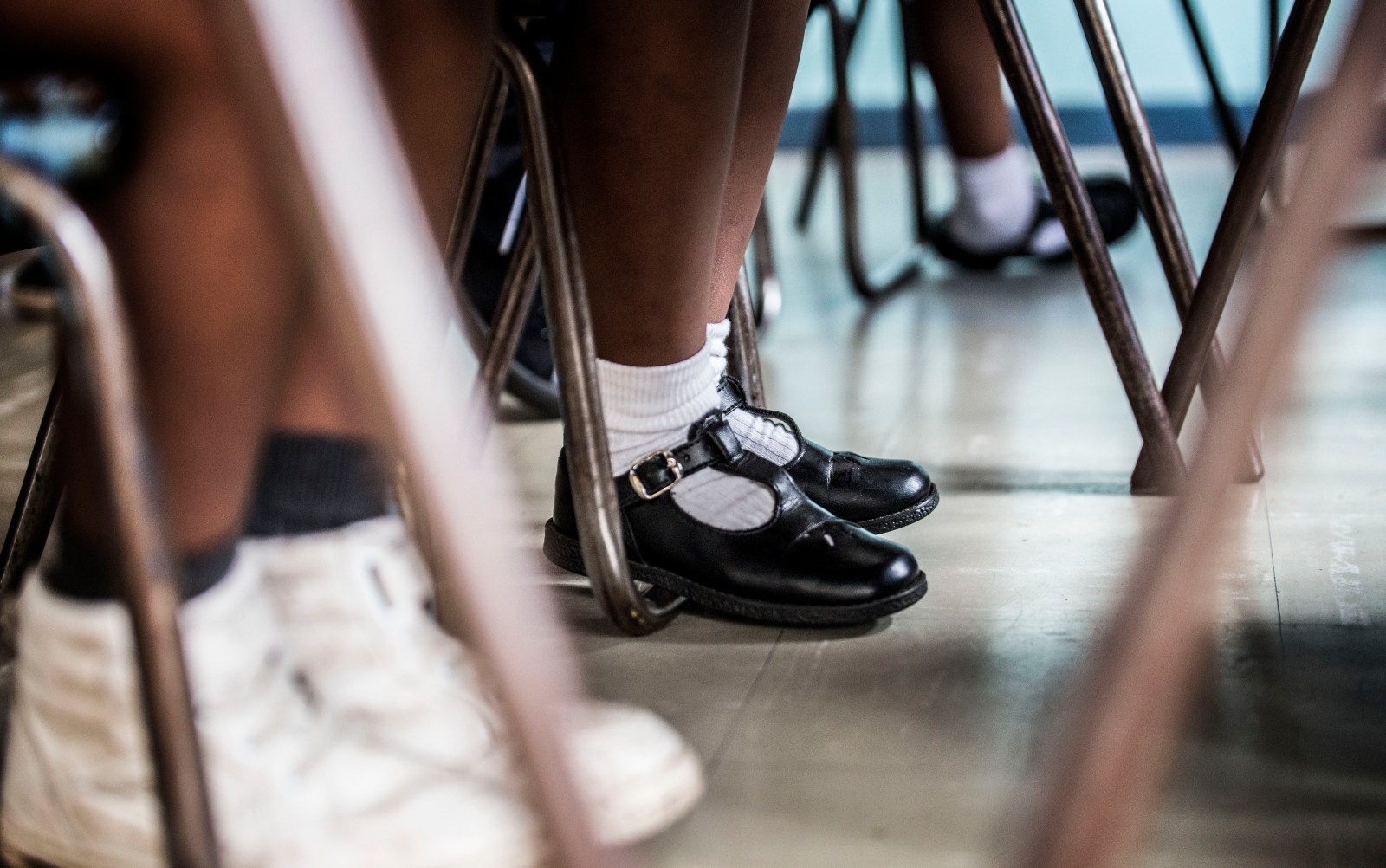 Learners in a classroom in Cape Town. 8 May 2018. Photo by Leila Dougan

Makangwane Secondary School in Limpopo is in such a derelict condition that in January 2018, a classroom’s corrugated iron roof blew off and nearly injured pupils. The Department of Education admitted that the school is “uninhabitable”, yet took no action to improve it. With schools reopening now for the third term, pupils are being taught in mobile classrooms that have only arrived because a court ordered the government to provide them. On Tuesday, the Bhisho High Court postponed judgment on a matter that may prevent future cases like that of Makangwane.

“When I was in Grade 10 the wooden beam from the roof fell in,” says 18-year old Petronella Hlako.

Conditions in Limpopo’s Makangwane Secondary School would only deteriorate further – to the point where lessons had to take place under trees outside.

“We didn’t even have a chalkboard to write on. When we sat down we didn’t have desks to write on, and our papers would be blown around by the wind, other learners would be making a noise and there are animals roaming around.”

Hlako, captured in a video by advocacy group Section27, says: “It’s not nice, especially when you know that other kids are sitting at proper desks but you’re writing under a tree.”

The dilapidated state of Makangwane Secondary School has been known to the Department of Education for several years, and the department admits that no maintenance has been done on the school since it was constructed in the 1970s.

It was the local community that built the school, without help from the apartheid government. In the democratic era, the community has found itself similarly stranded by authorities.

When the school’s governing body took the decision to move lessons outside the school in January 2018, it finally prompted some action from the department – though not the kind that the community hoped for.

Instead of fixing the school, the department refused to allow teaching to continue outdoors – which led to a situation, says Section27, where pupils in Grades 8 to 11 received no regular lessons between 14 March 2018 and 17 May 2018.

It was only after Section27 took on the case for the school governing body that the department proposed a resolution – still not to fix Makangwane, but to send its pupils to share the facilities of a local school, Sephaoweng.

Makangwane’s school governing body was unhappy with the proposed merger for a number of reasons: the fact that neither school was consulted; the fact that Sephaoweng itself had inadequate facilities; and the fact that the teenage students of Makangwane would now be sharing facilities with very young children.

In Section27’s court papers, they record one of the strangest elements of the government’s proposal:

This bizarre arrangement, argued Section27, would violate the rights of pupils at both schools as well as being unlawful in terms of the government’s failure to consult the relevant school governing bodies.

The case of Makangwane has a reasonably positive ending.

“Our understanding is that a catch-up plan (for schoolwork missed) will be implemented going forward.”

But this outcome was only achieved through the courts, and actively contested by the Department of Basic Education. In late June, the Limpopo High Court ruled that the government had to supply five mobile classrooms, adequate school furniture and a catch-up plan for Makangwane pupils by 17 July.

Without litigation compelling this action, it is unlikely that provision would have been made for the Makangwane pupils to receive a basic education in the manner to which they are entitled by law.

That law is not just the Constitution, but more specifically the Minimum Norms and Standards for School Infrastructure legislation, passed by Basic Education Minister Angie Motshekga in 2013 after three years of appeals from Equal Education.

Though the norms and standards legislation was greeted as a victory by education activists, its passing has had some unintended consequences.

Take the case of Makangwane, for instance. While the legislation makes it clear that Makangwane’s infrastructure does not meet the basic norms and standards, it also appeared to provide a loophole for the government to argue that it was not permitted to effect renovations at the school because its pupil enrollment numbers were too small.

The irony, wrote Section27, “is that the department seeks to accelerate its compliance with this one non-binding aspects of the norms and standards, while ignoring the more pressing and urgent obligations, such as fixing unsafe and inappropriate schools”.

Equal Education, Section27 and a number of other organisations have now taken the government to court once again, in a case first heard in March this year.

The case aims to do two things: to compel the government to properly implement the infrastructure regulations for schools, and to fix what Equal Education calls “the unconstitutional loopholes and gaps in the norms law”.

There are still schools in even worse situations than Makangwane – still schools “that are in crisis condition – constructed of mud, wood asbestos and zinc”, according to Equal Education. There are 4,986 schools at which pit latrines are the only form of toilet. On the day of the court hearing in March, five-year-old Lumka Mketwa drowned in a pit toilet at her school in the Eastern Cape.

On Tuesday, the Bhisho High Court announced that judgment in the matter will be handed down on Thursday 19 July.

If the court rules in their favour, say Equal Education, “there will not be any excuse for any failure by the nine provinces to comply with the deadline which the law sets for providing essential infrastructure by schools”.

If properly implemented, the norms and standards regulations could see schools like Makangwane outfitted with basics necessary for learning and teaching. It seems like a low bar – but up till now, it’s proved too high by far. DM