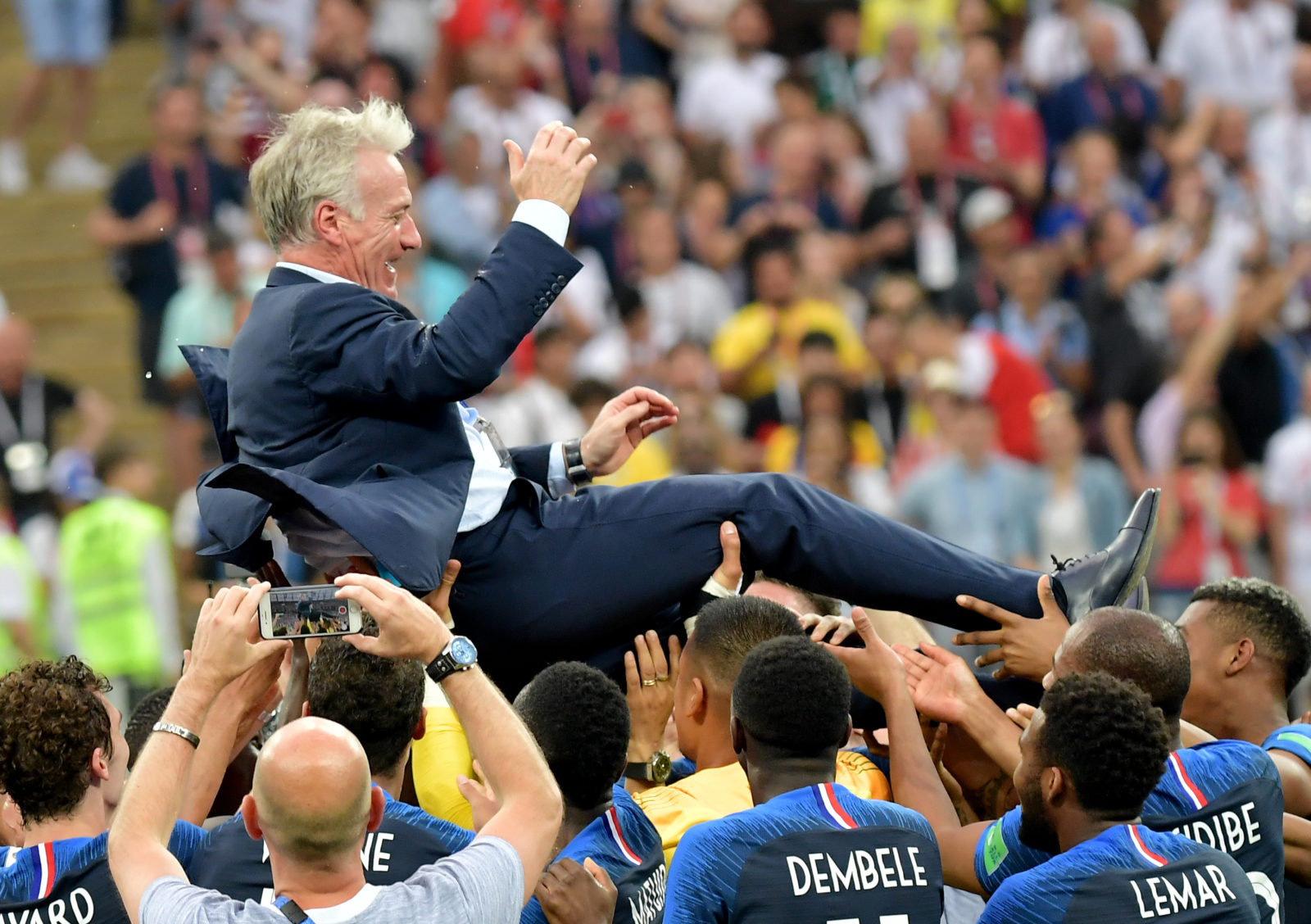 France's coach Didier Deschamps (up) celebrates with his team after winning the FIFA World Cup 2018 final between France and Croatia in Moscow, Russia, 15 July 2018. EPA-EFE/PETER POWELL

France's power on the counter-attack saw them take a 4-1 lead over Croatia in Sunday's World Cup final in Moscow.

Goals from Paul Pogba and Kylian Mbappe, as well as a controversial VAR-awarded penalty, helped France beat Croatia 4-2 in an incredible World Cup final in Moscow on Sunday to lift the trophy for the second time in their history.

In a match that had a bit of everything, Mario Mandzukic scored the first ever own goal in a World Cup final to put France in front at the Luzhniki Stadium, only for Ivan Perisic to equalise.

However, Antoine Griezmann’s penalty put France back in front after Perisic’s handball was penalised with the aid of the video assistant referee, before Pogba and Mbappe both scored in the second half.

The first team to score four times in a final since Brazil in 1970, the French could even afford to see Mandzukic pull a goal back following a ridiculous goalkeeping mistake by Hugo Lloris.

France join Uruguay and Argentina in winning the World Cup for the second time, after their 1998 triumph over Brazil when Didier Deschamps — now the coach – was the captain.

The game will be remembered as the highest-scoring World Cup final since England’s win over West Germany in 1966, and for Mbappe becoming the youngest player to score in the final since Pele in 1958.

But while the celebrations begin on the Champs Elysees avenue in Paris and across France, Croatia will wonder what might have been had the first-half penalty not been awarded just as they were in the ascendancy.

The smallest country to reach the final in the modern era will feel they were ultimately beaten by modern technology.

The questions before the match surrounded whether a tired Croatia side could pick themselves for this game after needing extra-time to beat England in the semi-finals.

Croatia played all the football early on, with Mbappe on the fringes of the game, but it was France who went in front in the 18th minute.

Griezmann won a soft free-kick wide on the right and his delivery into the area was flicked into his own net by the unfortunate Mandzukic.

It was harsh on Croatia, especially with Pogba possibly a fraction offside when the free-kick was played.

Zlatko Dalic looked rueful, but his team continued to assert themselves and were back level just before the half-hour, Domagoj Vida laying the ball off for Perisic, who shuffled the ball from right foot to left before drilling a superb shot past Hugo Lloris with the aid of a touch off Raphael Varane.

But Perisic was at the centre of the controversy that led to France’s second goal in the 38th minute.

His handball at a corner could hardly be described as deliberate, but Argentine referee Nestor Pitana reviewed the video by the side of the pitch and gave the penalty.

As a thunderstorm erupted in the sky over Moscow, Griezmann stroked home the penalty, his fourth goal of the competition and his third from a spot-kick.

It was also France’s first actual attempt on goal, but they picked off Croatia after the break.

Pogba started the move with a drilled pass for Mbappe on the right. His cutback found Griezmann, and he laid the ball off for Pogba to score at the second attempt from 18 yards.

Mbappe then added his name to the scoresheet in the 65th minute when he collected a Lucas Hernandez pass and fired low past Subasic from 25 yards, capping what has been a fine tournament for the 19-year-old.

That should have been that, but Croatia were given something to cling to as Lloris absurdly tried to dribble away from Mandzukic on the edge of his six-yard box, and the striker stuck out a foot to divert the ball in.

But for Lloris the World Cup winner’s medal will help make up for the embarrassment of that moment. DM