Even if Jacob Zuma’s son, Duduzane Zuma, was wearing a novelty shop rubber mask of FW de Klerk while driving his Porsche in the rain before it slammed into the back of a taxi on the M1 in 2014, resulting in the death of two women, a call on Thursday by a pop-up lobby group, Freedom For Duduzane, for FW de Klerk to be jailed instead, would be batshit crazy. The whole sorry exercise has also shown just how morally bankrupt whataboutism can be.

“Good name in man and woman, dear my lord, is the immediate jewel of their souls: Who steals my purse steals trash; ’tis something, nothing; ’twas mine, ’tis his, and has been slave to thousands; But he that filches from me my good name Robs me of that which not enriches him, And makes me poor indeed.” – William Shakespeare, Othello

On the night of 11 July, before Duduzane Zuma was due to make his second appearance in a South African court in the space of a week, this time in the Randburg Magistrate’s Court on charges of culpable homicide, a “flyer” by a group calling itself “Freedom For Duduzane” circulated on WhatsApp.

The designer was a little heavy-handed with the hashtags; there are eight in total including:

#Duduzane is the target because his father wants RET;

#How did Cyril Become a billionaire (no question mark);

#Stratcom must fall, and

They also managed to misspell Duduzane’s name as Duduzani (Carl? Is that you?)

“Let us meet at court ON THURSDAY. Randburg Magistrate’s Court” was the final exhortation by the anonymous FDD “National Convener”. 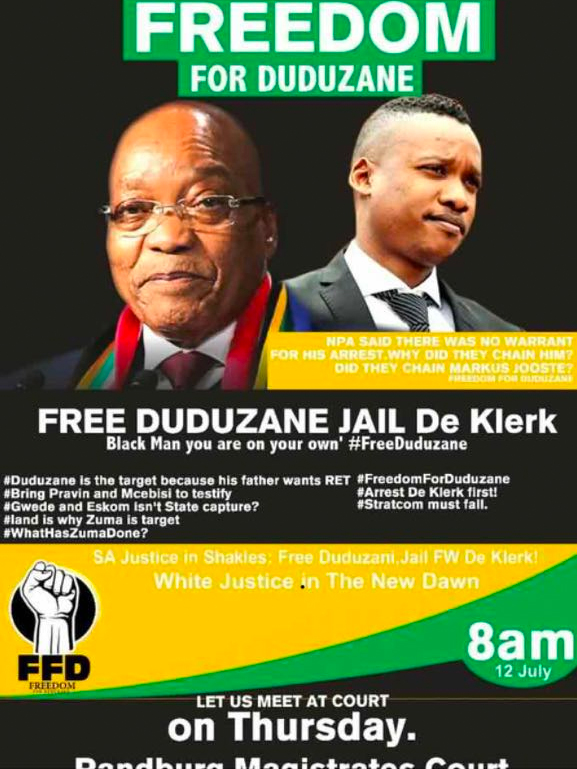 The fact that the FDD has confused or conflated Thursday’s court appearance by Duduzane Zuma in connection with the tragic death of two women after his Porsche slammed into the back of a taxi on the M1 south off-ramp to Grayston Drive in Sandton in 2014 with his appearance earlier in the week on charges of corruption is evidence of nauseating opportunism and deep-dish idiocy.

“No fucking court is going to stop us from defending ourselves against settlers. They stole our land. They make us slaves. Now, today they’re coming to take our dignity,” said BLF leader Andile Mngxitama, one of the handful of BLF supporters who actually gathered in front of the court. He was presumably referring to Duduzane’s suffering and harm to his dignity caused by the denial of his god-given right to drive his luxury car into a taxi and kill two women.

The thing about politics and power, as we have learnt from the series House of Cards, is that it is like real estate:

And you cannot get closer to Jacob Zuma than Duduzane.

It is precisely this close proximity that has cast a dreadful pall over the young man’s life and future ever since his mother, Kate Mantsho, took her own life, aged 44, in 2000 when Duduzane was only 16 and his father was still deputy president. Duduzane’s siblings from this marriage are twin sister Duduzile, Phumzile, Mxolisi and Vusi, 25, who tragically died from lupus earlier in July.

In her suicide note to her husband handed to then director-general in the Presidency, Frank Chikane, Kate pleaded:

“Please, Please will you take care of my dear children, you must not let them starve since I’ll be gone, pay their school fees to enable them to further their studies.”

She also begged her husband to “revisit your obligations as a Father to have Love/Passion for your own children”.

So much love did Jacob have for this son that he effectively made him a bagman for State Capture which is why Zuma Jr is being charged with corruption and the R600-million bribe offered to Mcebisi Jonas by the Gupta family to whom Jacob Zuma has sold, cheaply, much of the country.

Duduzane’s close proximity to his father’s power also no doubt had something to do with attempts by lackeys in the system at covering up or finding a way for Zuma Jr to avoid facing charges relating to the deaths of Phumzile Dube, a mother of a five-year-old daughter, Thembisile, and Nanki Jeanette Mashaba, who died months later from injuries sustained in the crash.

“Phumzile Dube died from extensive blunt force trauma, with extensive injuries to the internal organs of the chest and abdomen and multiple fracture blood loss.”

But later, not only did the NPA fail to inform Dube’s family that the authority had decided in 2015 not to charge Duduzane Zuma, this after inquest magistrate Lolita Chetty had found that Dube’s death had been “prima facie brought about by the negligent actions of suspect two, Mr Zuma” but the original sketch and statement given by Zuma Jr to the Sandton police had also simply vanished and has never been found since.

Dube’s family only found out about Deputy Director of Public Prosecutions Gauteng Division NK Gcaleka’s decision not to prosecute Duduzane Zuma when a letter, dated 18 August 2015, turned up in the #GuptaLeaks tranche of mails and was published in the media.

Gcaleka wrote: “I decline to prosecute. There are no prospects of a successful prosecution.”

Once the DDPP’s letter had been flushed out in the leaks, NPA spokesman Luvuyo Mfaku defended the decision, saying that it had been made “following an assessment of the evidence of witnesses and experts who testified at the inquest”. He also said that “indications” at the inquest were that the State would not be able to prove its case beyond any reasonable doubt.

It was only after AfriForum’s threat to embark on a private prosecution on behalf of the Dube family that the NPA got its act into gear and recharged Duduzane. The case was postponed to August 23.

There were those, from the Black First Land First, Freedom For Duduzane and others, who sought to make political mileage from the horrific death of two South African women, confusing any court appearance for any matter by a Zuma with some sort of witch hunt.

To add to the soap opera, Duduzane’s father arrived to support him, only it was too late to do so in person. Jacob Zuma remained in the car and then drove past in a tinted-windowed Presidential Protection Unit black 4X4. 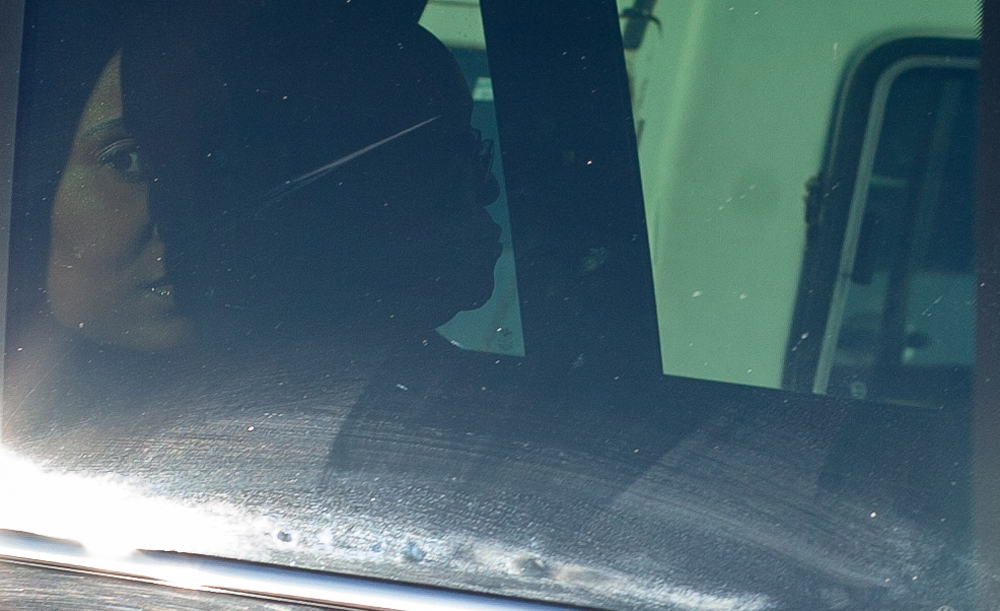 Duduzane Zuma could have been his own man if only he had escaped the toxic orbit of his father. Like the Trump sons, he too was attached to the benefits of wealth, high office and crooked connections.

The #GuptaLeaks show that Duduzane literally did nothing for himself. The Gupta family kept records of everything related to this young jewel in the Zuma crown from the repairs to the Porsche after the crash, Duduzane’s medical records, his SMSes to his new wife Shanice Stork, as well as the medical costs of a child born to another woman shortly before his marriage to Stork in 2015. There’s much more they had on Zuma Jr, but no need to rub it in right now.

Duduzane might find it impossible to ever carry a “good name”. All this is thanks to his father, a man who is quick on his feet and who thinks of himself before anyone or anything else.