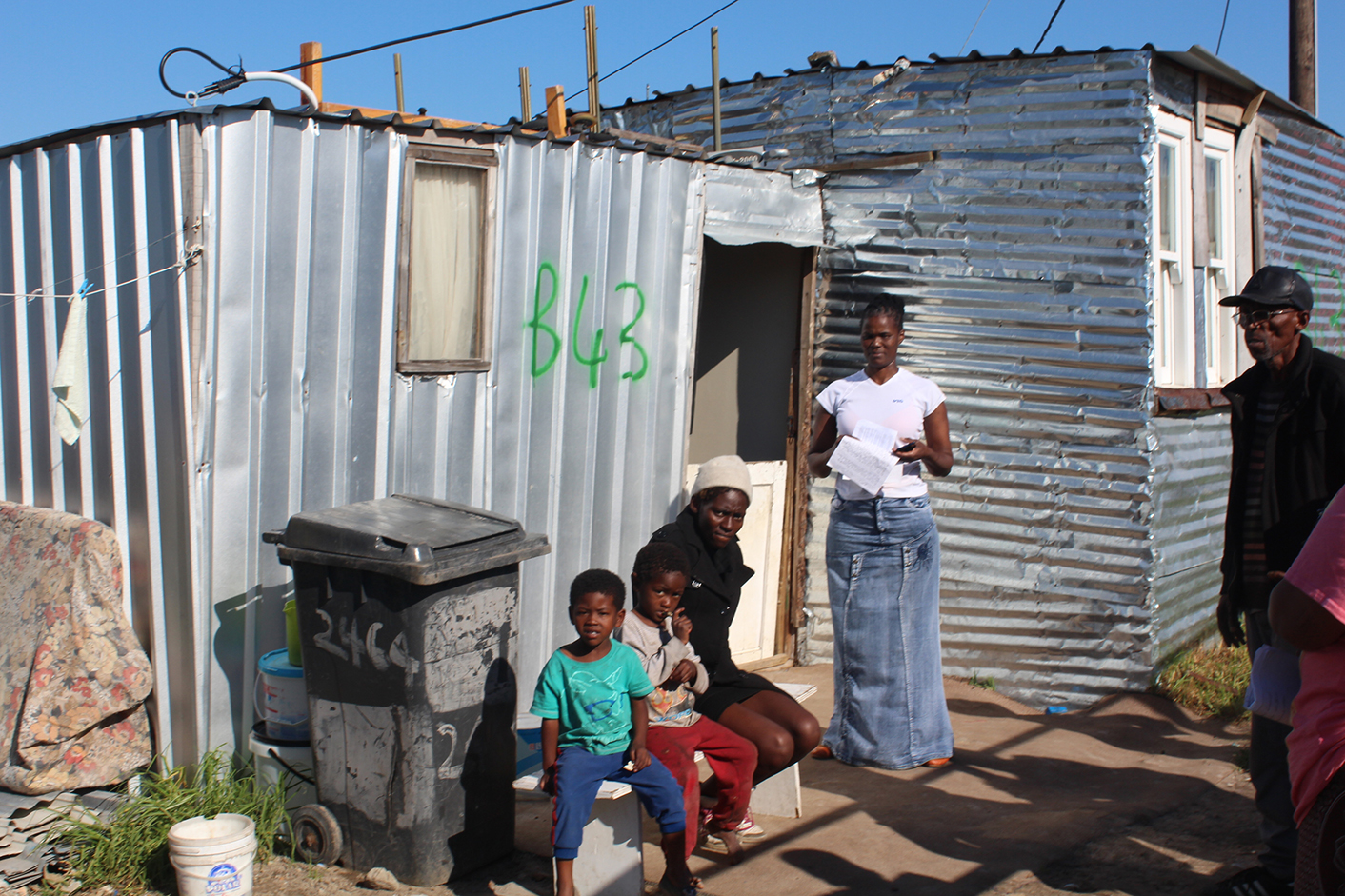 Kholelwa Mhini-Yonana (white top) stands outside her shack that she says she cannot get permission to extend, even though she shares it with six other people. All photos: Mary-Anne Gontsana

There's a stark divide between Bonnytoun’s coloured and black residents, but all await houses.

Behind the Wynberg waste drop-off facility, in between open land and trees, is an informal settlement called Bonnytoun. Residents have been complaining about a range of service delivery problems, including the failure of ambulances to come when called. GroundUp witnessed this first-hand.

We visited the informal settlement last week. A young man was lying in his father’s car outside his shack. His father said he had TB and chest problems which made it hard to breathe. They had been phoning for an ambulance since the previous day. Residents also phoned the ambulance while we were there. They were told the ambulance was on its way. But later that day — by the time we left — it still had not arrived.

The people we spoke to said this is a common problem. They complained about having to wait three to four days after phoning an ambulance. Sometimes an ambulance never arrives.

“We feel like we are forgotten in this area,” said the father of the sick young man.

We have attempted several times to get comment from Emergency Medical Services, to no avail.

Bonnytoun is a mixture of black and coloured people. The informal settlement, which is on city-owned land, has a gravel road running through it. It is quite green, with lots of grass and trees. There is only one entrance and exit.

Shoddy ambulance service is only one of many complaints the residents have.

Kholelwa Mhini-Yonana has been living in Bonnytoun for a year. She moved here from Fish Hoek, where she was a backyarder for 17 years, a year ago. She lives in a two-room shack with six other people but said she has been constantly failing to get permission to extend her shack, even though there is space to do so.

She said there is also no electricity on her side of Bonnytoun, though there is in the coloured part of the neighbourhood.

Mhini-Yonana says there are communal flush toilets, but many of them have been locked by households who have taken “ownership” of them. She uses a portable “pota-pota” toilet.

“Other people relieve themselves in the bushes in the open field,” she said.

Some residents have been living in tents since a fire in January destroyed their homes. They complained that their community leader, Monica “Mona” Allie, does not help them.

Mhini-Yonana described the problem as racial. “There is a major racial divide here between blacks and coloureds and our leader (“Mona” Allie) is coloured. If you take a look at the other side of Bonnytoun, especially Mona’s house, it is big. She has electricity. All is good on her side, but we are here living in tents.” When we interviewed Mhini-Yonana, a group of residents were standing with her, and agreeing with her comments.

Allie’s house is separated from the shacks in which the black residents live by a stream. It is a shack, but it is made from wood, not corrugated iron, and it has electricity.

At first she said: “I don’t have any comment. What must I do? Why are the people here? I’m not taking anything to the councillor. I don’t listen to their problems.”

But then she changed her response to say she does bring the community’s grievances to council meetings, and she relays the outcomes of the meetings to the community.

Allie pointed out that the coloured residents had been living there for 30 years and that is why they had electricity. The black residents have been there for a much shorter time, though some told us they had been there since 2005.

Xanthea Limberg, the Mayoral Committee Member for Informal Settlements, said Bonnytoun was established before 2000. She said that originally the settlement consisted of eight structures. However, permission was granted for an additional 22 homes following a 2005 court order. She said that today there are “58 structures in Bonnytoun which are occupied by approximately 290 persons”.

Another resident, Derrick Nyumbeka, showed GroundUp his tiny cluttered shack that he shared with two other people. Nyumbeka’s shack, was right next to a dirty stream filled with rubbish. Next to his shack was a tiny tent, that was home to another resident.

“As you can see it’s dark and wet in here. There is no electricity and when we ask to pull electricity from those that have, you have to pay. Even that does not help because the electricity runs out and no one has money to buy more. When it rains, my shack floods completely,” said Nyumbeka.

Limberg said the makeshift structures at the back of the settlement, in the bushes, had been erected illegally and all legal, numbered, structures had an electricity supply.

“Fourteen concrete flush toilets and eight standpipes have been provided. The city is aware of the fire in January. The Informal Settlements Department provided assistance at the time, but did not provide building materials to the illegally-built structures at the back of the settlement,” she said.

Asked whether there were any plans in place to upgrade the informal settlement Limberg said: “The city has arranged that those legitimate residents of Bonnytoun be added to the housing database to benefit from housing opportunities when these become available.” DM