Accountability and the right to good food 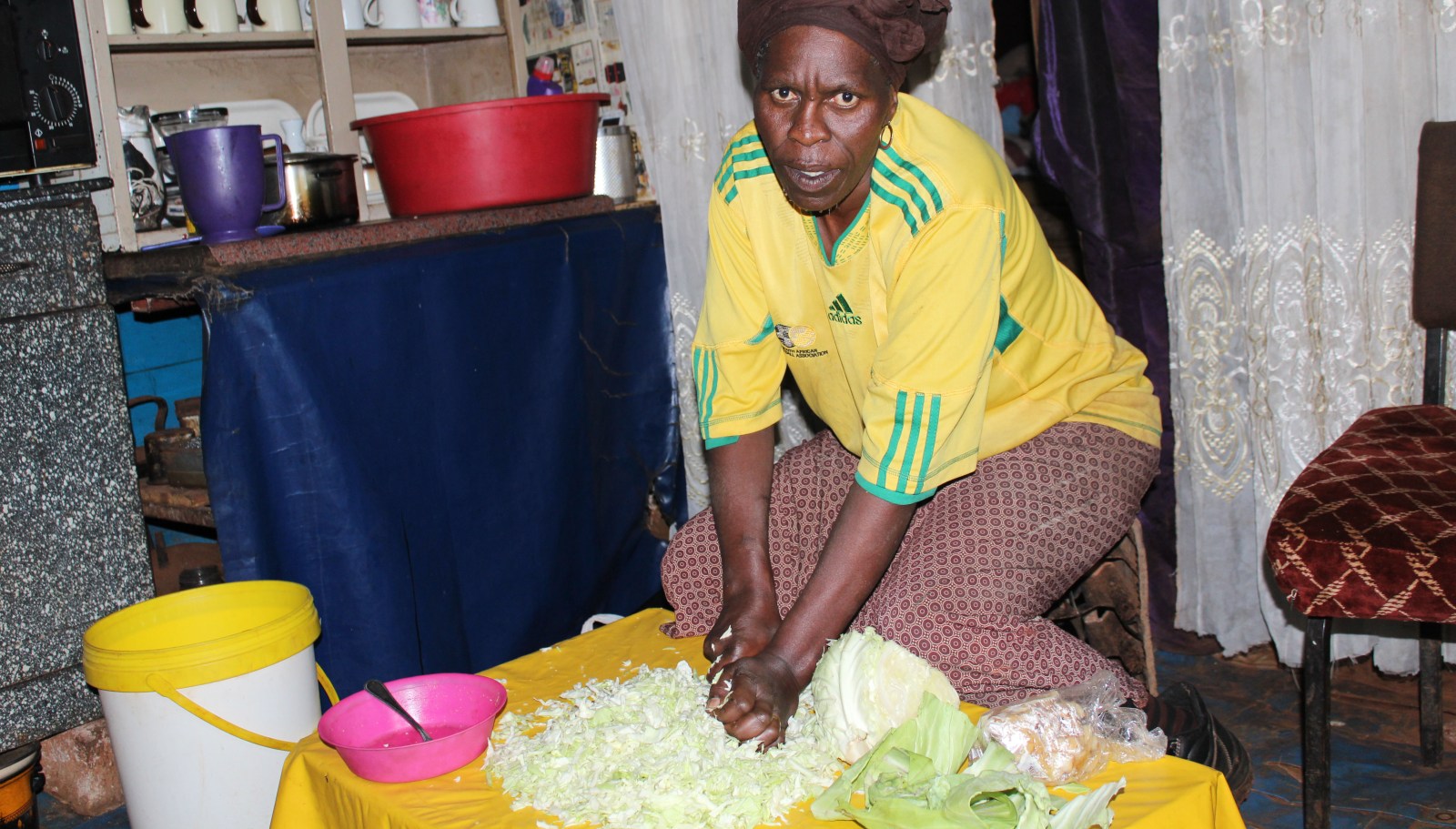 Nonosisi Maseko, a 58 year-old grandmother from Vosloorus, chops cabbage for dinner for her and her 8-year-old grandson.

South Africa has a progressive Constitution, with the right to adequate food counted among our basic human rights. But while there are feeding schemes, food programmes and social grants abound to ensure our people are fed, still millions are going hungry.

Like millions of other South Africans Nonosisi Maseko, a 58 year-old grandmother from Vosloorus, struggles through each month – does her best to put food on the table but often what she has does not last the month and hunger looms large.

Maseko receives a monthly child care grant of R400 for her eight-year-old grandson who lives with her. Occasionally she helps aid organisations identify hungry families in her township and in payment she receives the odd food parcel. A small amount of donated food and the R400 grant is what she and her grandson survive on every month.

She told Health-e News that with this money she can afford a 5kg bag of maize meal, 2 litres of cooking oil, 10kg of potatoes and a bar of Sunlight soap which is used for bathing and laundry. The money she has over from the grocery spend is used to pay for all their other needs as well as school transport.

Maseko says she buys food so that she and her grandson can eat as many meals as possible each month. She does not consider the nutritional value or anything else beyond the financial cost.

“What matters is that we go to bed with a full stomach,” she said.

As is the case for Maseko, the guaranteed right to adequate food remains illusory for many millions of South Africans. Food Security SA says government’s efforts do not prevent a significant number of South Africans, especially children and rural dwellers, from being food insecure, malnourished and experiencing hunger.

Both the international health bodies and South African government at various forums in the last 20 years or so have committed to ending undernourishment in the world. The right to adequate food is guaranteed in a number of international and regional human rights instruments such as the Food and Agriculture Organisation of the United Nations.

A key example would be the child support grant given out under the country’s social security programme – the grants paid out by the South African Social Security Agency. The grant is intended to provide for the basic needs of South African children whose parents or primary care-givers are not able to provide sufficient support due to unemployment or poverty.

However according to Professor Ebenezer Durojaye, head of the Socio-Economic Rights Project at the Dullah Omar Institute at the University of the Western Cape: “On paper it would seem the government is doing well. But, in reality this is far from the truth, because all these programmes and policies have not translated into a positive impact on the lives of the people.”

Durojaye added that: “Due to poor or ineffective implementation the right to food remains unrealisable for many South Africans. It is clear that beyond these programmes, government needs to redouble its efforts in ensuring their proper implementation on the ground.”

How do these programmes fail?

The South African National Health and Nutrition Examination Survey (SANHANES-I) conducted in 2013 found that almost 25% of South Africans were at risk of hunger and another 25% experienced hunger. It was further noted that 15.3% of children in South Africa in 2012 lived in households that reported hunger.

“African” children were identified as the most likely to be living in households reporting hunger (16.9%) with the lowest percentage being amongst Indian children in 2012 at only 0.6%.

According to Food Security SA, some of the challenges militating against the realisation of the right to food in South Africa include the lack of specific legislation dealing with food, poor funding and lack of skilled human resources to execute the various policies and programmes.

Durojaye told Health-e News that the fact that issues relating to food are covered by various government departments makes it difficult to coordinate all the various efforts of these departments causing a great amount of fragmentation of activities and policies.

“Currently, several departments including the departments of social development, education, health, rural development and others are involved in implementing right to food programmes,” said Durojaye, explaining why co-ordination was sometimes difficult.

The South Africa’s Child Support Grant (CSG) was introduced in 1998 under the social security programme with the objective of improving the well-being of young children.

“It was intended to reduce malnutrition. But surveys show that there has been no shift in child malnutrition rates since the 1990s,” said Dr Stephen Devereux, Co-Director of the Centre for Social Protection Institute of Development Studies (IDS).

The incidence of malnutrition, according to Durojaye, is an indication that the government is not doing enough to realise the right to food.

“It costs over R600 per month to follow a nutritious balanced diet for a child, so the child support grant (at R400) is only enough to basically cover two-thirds of a healthy diet for a child, and then only if all the grant money is spent on nothing other than food for one child,” said Devereux.

So, what is the solution?

“The government should ideally ensure that there is a single specific department or body responsible for overseeing the realisation of the right to food,” said Durojaye.

He said there is also the need for a law dealing very specifically with the right to food and good nutrition in the country.

“The right to food is about the only socio-economic right we have without a specific law to give teeth to the constitutional provision on this right,” he explained.

“Government also needs to strengthen its oversight role in monitoring activities of non-state actors relating to the right to food.” DM