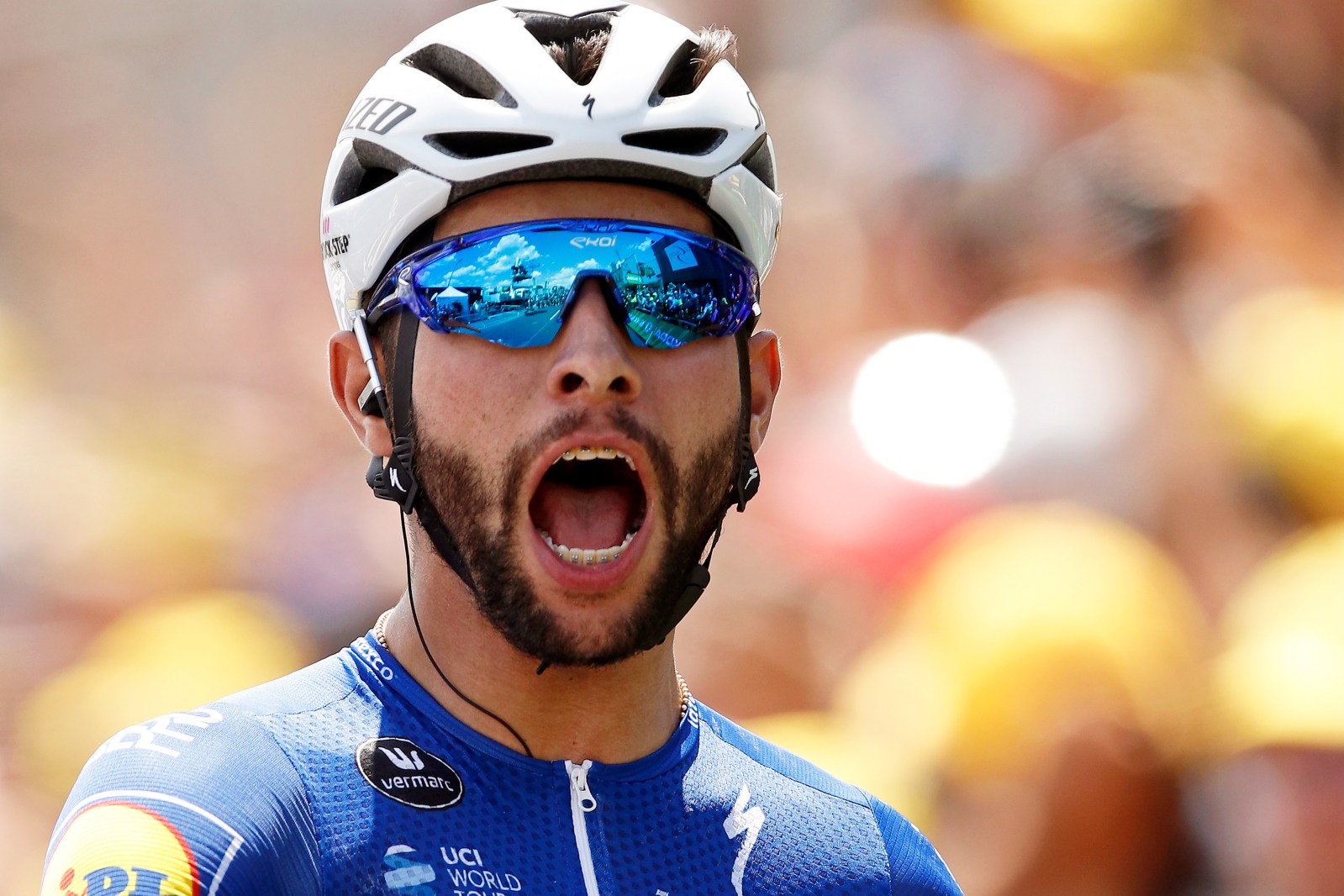 Colombian rider Fernando Gaviria of the Quick Step Floors team celebrates as he crosses the finish line to win the 1st stage of the 105th edition of the Tour de France cycling race over 201km between Noirmoutier-en-l'Ile and Fontenay-Le-Comte, France, 07 July 2018. EPA-EFE/YOAN VALAT

Chris Froome, bidding for a record-equalling fifth title, and 175 other riders set off on the first stage of the 2018 Tour de France on Saturday from the island of Noirmoutier off the Atlantic coast.

Chris Froome’s bid for a record-equalling fifth Tour de France title got off to a shaky start Saturday after a dramatic crash left him trailing first stage winner Fernando Gaviria by over one minute.

With just 6km to the finish, Froome went flying over a barrier and landed on a grassy verge, emerging seemingly unhurt as the peloton sped off to a frenetic sprint where Quick Step’s Gaviria edged Peter Sagan and Marcel Kittel to don the yellow jersey.

Froome, fellow Briton Adam Yates and Australian Richie Porte, all pre-Tour favourites, all lost valuable seconds having been caught in a series of falls and flat tyres over the final 10km of the 201km opening stage.

For Colombian Nairo Quintana it was even worse, the Movistar man who is twice a Tour runner-up got a flat tyre 400m from the 3km cut off line and had he just carried on would have lost no time, but changed his wheel and ended up losing 1min 10sec.

– Relief and confidence –
Froome expressed both relief and his usual quiet confidence after the race.

“We knew the first days were going to be tricky, what happened is part of the game,” said the 33-year-old who had a skinned knee and some possible bruising on his right shoulder after his head over heels fall.

“It was getting quite chaotic up at the front with the sprinters getting into position.

“There wasn’t much the team could have done for me,” he said after being accompanied across the line by Luke Rowe.

Froome, who fell heavily before the Giro d’Italia prologue but rallied two weeks later to two spectacular stage wins that won him the Tour, added: “There’s still a great deal of road on the way to Paris.”

Froome’s teammate Egan Bernal, the youngest rider on the race also fell, albeit in an earlier incident than Froome’s and came home alongside his compatriot Nairo Quintanata at 1min 15sec.

Gaviria was left thrilled after his impressive stage win on his very first Tour de France, achieved after he outlasted world champion Sagan in a long struggle down an 800m home straight with Kittel, who won four stages on the 2017 Tour, leaving his bid too late and coming third.

“I just said to myself ‘go’ and had the legs luckily,” Gaviria said.

“What an amazing day, nobody is happier than me.

“The team did amazing. Tomorrow I’ll be in yellow and try and keep it as long as possible.”

Clicking on the images will launch the gallery.

The Colombian added: “I don’t know about keeping the yellow jersey because of the mountains, but I plan to fight for the green jersey (sprint points) all the way to Paris.”

Former green jersey winner Thor Hushovd, here working for Norwegian television, suggested that Kittel and Dylan Groenewgen were the key sprinters to watch out for this year.

On a sunny Saturday early in the school holidays, enormous crowds of fans packed the seaside towns along the Atlantic coast in a highly festive atmosphere where any expected fall out from the Froome booing on Thursday was muted, with AFP seeing just two signs along the roadside targeting him with messages of ‘Froome go home’ and ‘Froome the doper’.