Seeking a safe space: ‘It’s not nice to see your mother beg’ 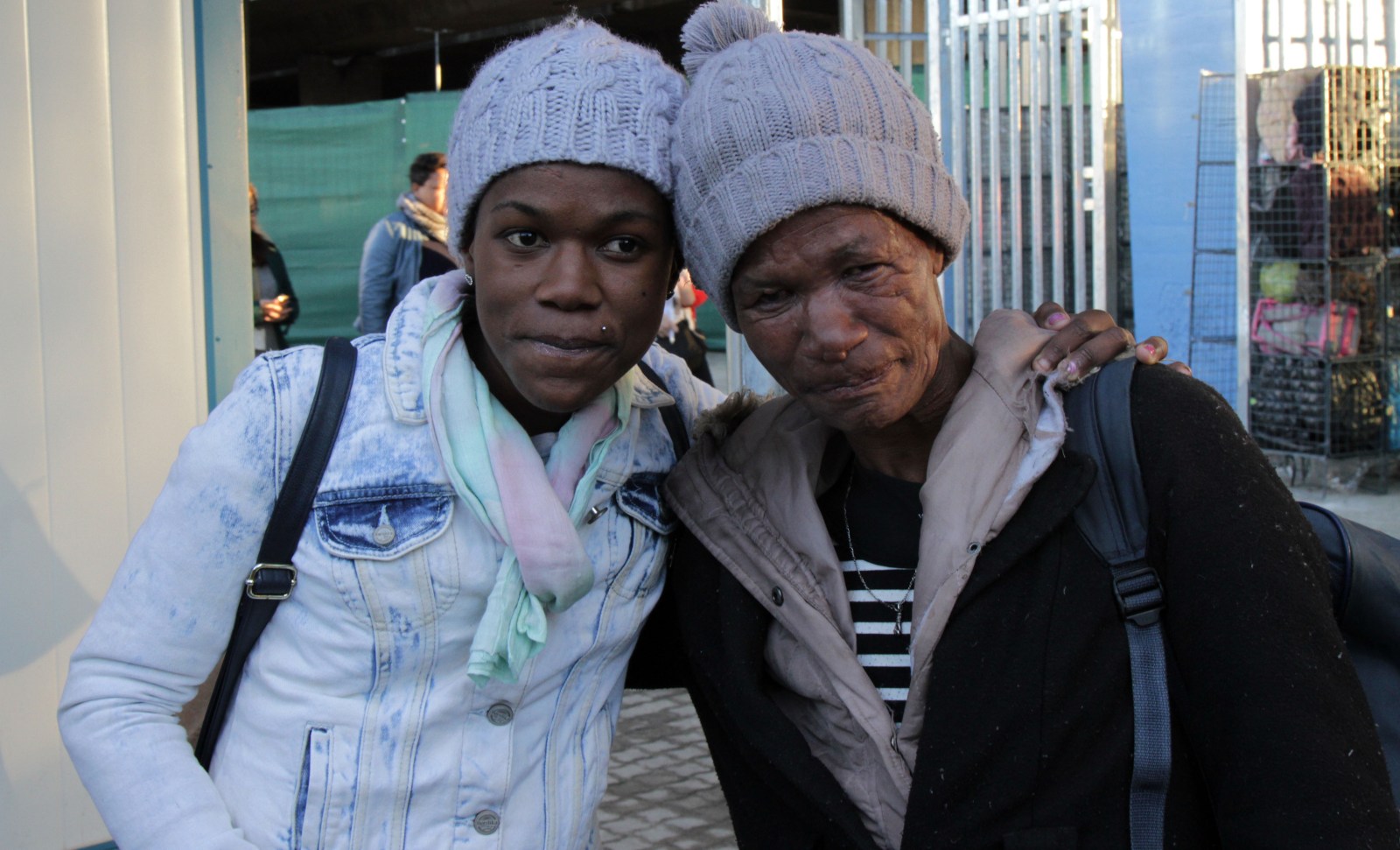 "I want to be a social worker one day so I can help people like her," said Jocelyn Diedericks about her mother, Esther. The mother and daughter were photographed at the opening of Cape Town's first safe transitional overnight space for the homeless in Cape Town on 3 July 2018. Photo: Hlumela Dyantyi.

In the cold of winter, shelters for the homeless get very crowded. An overnight facility is being opened to accommodate 230 homeless people in the Cape Town city centre.

“I don’t like to talk about it but I got into an accident when I was three years old… I remember we were still living on the streets…. My mother was drinking with her friends, and she didn’t watch out for me. I was running and playing and then I got hit by a car…. But I don’t get angry at her … I love my mother.”

Jocelyn Diedericks, 21, was a street baby. She was diagnosed with epilepsy after the car accident.

Instead of resentment, she has empathy for her mom, Esther, and is aware of her many obstacles and vulnerabilities.

Diedericks was moved into various foster-care homes after she stopped living on the streets. She has been through many adversities but she managed to complete her matric in 2015 and is now employed as a call-centre agent.

Diedericks’ mother still lives on the street, and she stays in contact with mother and is a positive influence in her life.

Diedericks spoke to Daily Maverick when she accompanied Esther to the media launch of a “safe space” for the homeless hosted by the City of Cape Town.

Esther is one of the street people who could benefit from the voluntary overnight space.

Esther has been living on the street since she was eight years old. She moved to the streets after she got into an argument with her mother. Diedericks said that she often has to ask other people who know Esther about her past because she struggles to communicate and interact with people.

And despite Diedericks’ many efforts to move her mother into her home, she says she always ends up going back to the streets.

“I’m renting in Athlone and I’ll take her (Esther) home but when I wake up the next day she’s gone. You know, she’s not used to staying in a house. She’s not used to interacting with people and getting a plate of food. She doesn’t know how to live properly if she’s not on the street,” Diedericks said.

Diedericks has three other older sisters who she says do not help to take care of her mother. She says that she is the only one who still visits her mother, and provides her with toiletries and food.

She adds: “I just took my mom to KFC now. I like to get her food when I get paid and bring her stuff because I know that she has to beg or go through rubbish bins to get food. It’s not nice to see your mother beg. I want to be a social worker one day so I can help people like her. My other dream is to own my own house one day.”

“This facility is not just a place to sleep… It is an environment that will connect people to opportunities… It will restore dignity.” said JP Smith, Mayoral Committee Member for Safety, Security and Social Services.

The site, which is still under construction, will officially open in mid-July 2018 according to Smith. It is situated just under the Culemborg Bridge on the Foreshore Cape Town, and will be a voluntary safe space for up to 230 street people, like Esther, to spend the night.

The space will provide beds, water, ablution facilities (including two for people with disabilities) three on-call social workers and lockers where people can store their valuables during the day until they return in the evenings.

“(The space) provides a contained space for NGOs to offer services to street people,” said Smith. The street people will be directed to job opportunities through the city’s Expanded Public Works Programme (EPWP) and the city’s department of Social Development will help street people to get identity documents at Home Affairs. The area will be drug-free, alcohol-free and weapon-free.

Smith said that factors like rising unemployment and job scams, where people are lured into coming to Cape Town with the idea of finding jobs but end up being scammed, are contributing to homelessness in the city. One feature of the pilot project is that people will have the option to be transported back to their home towns by the city should they feel unhappy in Cape Town, Smith said.

The safe space is a “step in the right direction” said Lorraine Frost, Head of the Department of Social Development and Early Childhood Development. Frost said at last count in 2016, there were around 8,000 homeless people living in Cape Town. Plans are under way to do another count this year. DM