Crime: 2019 Elections’ political football between the DA and ANC 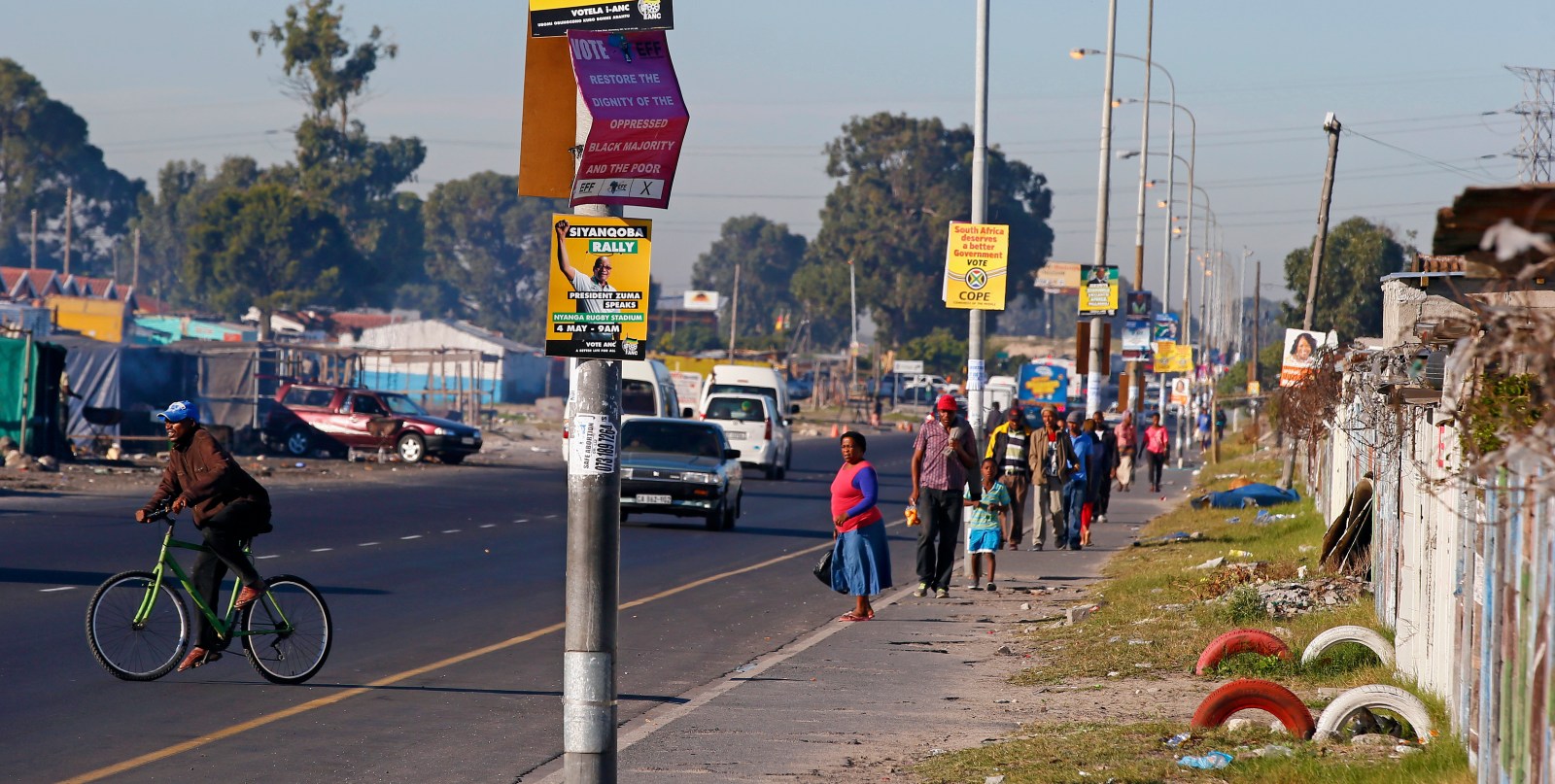 Crime in the Western Cape is set to become one of the hot-button issues in the run-up to the 2019 elections. While the ANC claimed the defection of the DA’s Lennit Max as evidence that the DA is not serious about tackling crime, DA leadership was in murder capital Nyanga to make the point that responsibility for police falls under the national government.

DA leader Mmusi Maimane is trying to address journalists outside the Nyanga police station, but there’s a problem.

Directly behind him, a woman in the holding cells is repeatedly banging her cell door and screaming. Nyanga station commander Vuyisile Ncata has described her as “mentally disturbed”.

Maimane listens to the cacophony for a minute, and sighs.

“It is what it is. It’s daily life,” he says, and begins his remarks.

Daily life in Nyanga is darkened by crime to a degree that is extreme even by South African standards. Nyanga continues to record the highest number of murders in the country: 291 in the 2017 statistical year.

Maimane’s appearance at the Nyanga police station on 3 July was billed as a “surprise visit”, but the element of surprise was weakened by the gathering of DA supporters and journalists outside the station ahead of Maimane’s arrival.

A day earlier, former provincial police commissioner Lennit Max had announced that he was ditching his role as a DA Member of the Provincial Legislature in order to take up a position as special adviser to Police Minister Bheki Cele. In a press conference to publicise his move, Max had hit out at DA leadership for rejecting his offer of “skills and expertise to curb crime in the Western Cape”.

While Maimane was en route to Nyanga, the ANC in the Western Cape were holding a press briefing to make some mileage out of Max’s comments.

“The statement by Lennit Max affirms our long-held belief that the DA has very little to offer in solving crime, but spends more time, effort and resources in politicising crime in the province than actually solving it,” acting ANC Western Cape chair Khaya Magaxa said in a statement.

“The DA has continuously sung the song of policing as a national competency and that as a provincial government they cannot do anything to prevent crime. [Western Cape Premier Helen] Zille and her cabinet believe their sole mandate in the fight against crime is oversight agents, nothing more.”

The ANC says that the DA is failing to make appropriate use of section 206 of the South African Constitution, which grants provincial governments powers to enact crime prevention strategies.

In Max’s press conference, he claimed that DA federal chair James Selfe had admitted to him that he feared the DA was not testing the limits of section 206 as it should in order to deal with crime.

But in Nyanga, Maimane was pushing the DA line on the matter.

Asked by Daily Maverick for his response to Max’s comments, Maimane replied:

“Let Mr Max continue his job. Policing is a national competence… The province only has an oversight function. The city can only do so much. The national police must act, because it’s a competence of theirs.”

“What Mr Max does and what he doesn’t do is his own issue. My primary focus here is to say: Let the national police come and let’s do our job. Murder is on the rise, and it’s irrelevant having a discussion about one person. We must talk about, really, the systemic formatting of crime. Because our people are being killed here.”

In a statement that the DA would put out after Maimane’s Nyanga visit, responsibility for tackling crime was placed more squarely on the ANC’s shoulders.

“Let me state very clearly: The police are the responsibility of national government. It is something neither the Western Cape provincial government nor the City of Cape Town has any control over,” the statement read.

“All control over SAPS – from policing policy to how and where they deploy their resources – is in the hands of national government.”

A DA national government, said the statement, would “ensure a fair allocation of police resources”.

The issue of allocation of police resources has been one of the biggest criticisms of Western Cape policing over recent years.

In the Western Cape as a whole, the ratio of police to residents is lower than the rest of the country.

“The population of this province grew by 100% in 20 years,” DA Western Cape leader Bonginkosi Madikizela told journalists outside the Nyanga police station.

“In 1998 we had about 3.2 million people, now we have double that number. Resources, particularly in policing resources, have not kept up with that growth.”

The Nyanga police station currently does not have enough working space for its detectives and cannot accommodate a Sexual Offences Unit.

GroundUp reported in May 2018 that the murder capital’s police station “is earmarked for repair and upgrade as priority number 134 on the South African Police Service’s User Asset Management Plan”.

Though former police minister Fikile Mbalula announced in October 2017 that 100 new police officers would be deployed to Nyanga, residents say little has changed on the ground.

“It is bad, very bad here,” local vendor Fezeka told Daily Maverick. She was dismissive of politicians of all stripes.

“They come here and say things will change but it is still the same for us.”

Though the ANC in the Western Cape says that the DA does not flex its muscles enough in attending to provincial policing problems, the DA’s attempts to do so in the past have met with failure.

The party’s call for the South African National Defence Force to be deployed to Western Cape crime hotspots has thus far fallen on deaf ears.

Maimane said that former police minister Fikile Mbalula had in principle approved the idea in late 2017, but since Mbalula’s replacement by Bheki Cele there has been silence on the matter once again.

At 10:00 on a Tuesday morning, there was already a queue of residents waiting to be attended to by the desk detectives at the Nyanga police station.

In the run-up to the 2019 general elections, Nyanga locals can expect many more visits from politicians – but as they have learned from weary experience, big talk rarely translates into big transformations. DM