Anger & Emotion happened, but then What? 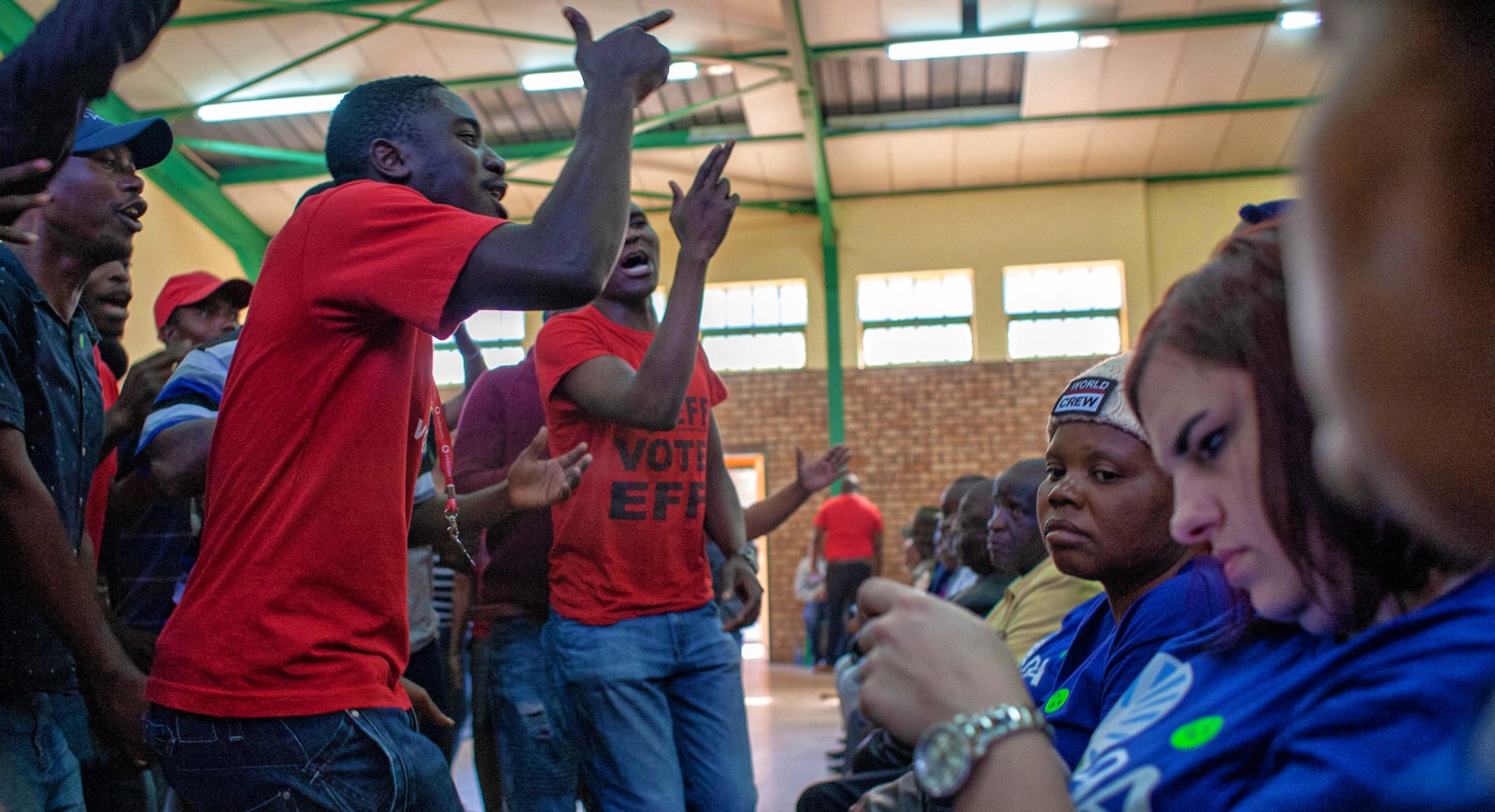 EFF supporters sing in front of DA supporters in Limpopo at the hearings on changing Section 25 of the Constitution to allow for land expropriation without compensation. (Greg Nicolson)

Black South Africans are largely landless and most speakers during four days of hearings in Limpopo expressed their anger over a lack of redress for apartheid and supported changing Section 25 of the Constitution. The hearings, however, struggled to address the complex questions of what might happen next.

As the first week of public hearings into whether Section 25 of the Constitution should be amended to allow for the expropriation of land without expropriation came to a close in Thohoyandou, Limpopo, on June 30 2018, one woman spoke in support of the move.

White farmers regard black workers as dogs and baboons, she said, and white employees at the mine in her community get paid more because of the colour of their skin.

Over four days in Limpopo, an overwhelming majority of speakers at the hearings supported changing the Constitution’s property rights clause to allow for the expropriation of land without compensation, the country’s most controversial issue.

While some speakers offered more nuance about the complex history and potential future of land laws, most only had the chance to express anger about the lack of redress from whites for colonialism and apartheid and emphasised that expropriation could help economically uplift black communities.

“Today we want the land back. We support the motion,” said Queen Ngqaba from Musina outside the Thohoyandou hearings. “It’s because they took our land and now we don’t have any space… They are benefiting from it and we are not.”

“As the African people we are living in poverty where we stay,” added Munyai Itani, also from Musina. “The rainbow nation must be reflected economically.”

In a statement, the committee summed up the arguments for changing the Constitution: “Those that support the amendment of Section 25 have largely based their argument on the need for redress for colonial and apartheid-era dispossession. Second, a strong belief that land holds the key to economic emancipation of a majority of poor black South Africans was also advanced. Third, this group emphasised that landless people have the skill set to make productive use of land if they are to get it.”

Speakers got three minutes to give their views and the nature of the process led to hardliners on either side dominating the day. There was no space for dialogue or engagement and the comments were largely repetitive, reflecting the dominate views already well known, again and again. It was like a refresh button was hit before each speaker took the mic.

The hearings came out of the ANC’s decision to join the EFF in its quest to review the law to expropriate land without compensation. Whatever stats you look at, white South Africans still own land vastly disproportionate to their population size while black citizens remain largely landless. Over the last 20 years, the ANC government’s land redistribution and restitution efforts haven’t come close to meeting the original targets.

On the first two days of hearings in Limpopo, the ANC had almost no presence. The EFF dominated the hearings and the DA was always present. But even Cope members were more prominent than the ANC.

DA Limpopo leader Jacques Smalle questioned whether the ANC might not care about the process, was irresponsibly raising people’s hopes, and maybe had already made its mind up on what to do in Parliament.

On June 30, the ANC finally turned out and 58-year-old Simon Maba collected a free T-shirt. “The expectation is very high that we are gunning for the principle in terms of the Constitution and the land must go back to its people,” he said. During the hearings, ANC members later supported amending the Constitution, a stance slightly ahead of party policy.

In May, the ANC national executive committee decided to test whether land could be expropriated without compensation within the current limits of the law and would only seek to amend the Constitution if the courts rule against the plan. The party appears to be split on the question, with President Cyril Ramaphosa’s faction reportedly against it.

There was a feeling among white farmers at the hearings that politicians have already made their minds up on the issue and want to support taking land without compensation to win votes in the 2019 elections. Yet white farmers still came to the hearings.

In Mokopane, a group of farmers left the hall to talk outside. They formed a prayer circle to pray for their futures. Later they listed reasons as to why taking the farms won’t work. They cited hefty start-up costs, which the government could never cover even if it improves on the support it has offered to emerging black farmers. They said they supported empowerment, but not in this way.

Around a dozen white farmers met in Louis Trichardt on Saturday morning and drove to the Thohoyandou hearings in a convoy. Doos le Roux organised the group. “Die Boer is hier om te BLY,” his shirt read, “The Boer is here to STAY.”

“We cannot stay away. Then they think you do not care,” said Le Roux.

Le Roux has had land claims on his property before, but nothing came of them. When he addressed the hearing, he said, “If you take something from somebody and don’t compensate them for it, we call it theft. Only thieves and criminals steal from someone.”

Le Roux and his group left after he spoke. “The most important thing is to just keep farming. Build it, grow it. If you lose it, lose big,” he said. He doubted anyone would listen to his comments, but then added, “Maybe they will. I don’t know.”

In its summary of the hearings, the parliamentary committee said those against the amendment believed it would harm the economy, deter investors, threaten food security, and was unnecessary as the current laws already provided for expropriation but politicians lacked the will to either fulfil its own commitments or test the laws on taking land.

A number of speakers lamented the failures of the current land reform system. Calvin Leshiba’s community was moved under the 1964 Bantu Laws Amendment Act and lodged its land claim in 1998, but despite being approved the community has only received around 15% of its ancestral land.

“Many, many people have died here without seeing a piece of land,” said Leshiba, whose father, a local leader, died at 107 years old in 2002 before any of the claims were settled. He blamed the “willing buyer, willing seller” model, where government paid market value for properties earmarked for redistribution.

The committee will look at the almost 800,000 written submissions as well as comments in the public hearings before making its recommendation on Section 25 to Parliament. The public hearings, however, highlighted a key problem beyond amending the law.

Speakers offered different views but there was no defined question on the real issues: If land is to be expropriated, what land is to be taken, from who, and who will receive it?

Leshiba and others suggested land be expropriated in the current context of outstanding claims. Most speakers however suggested all land should be taken from whites and either distributed equally among citizens or nationalised and either leased back to whites or leased to everyone. Some speakers suggested nationalising all land, others who supported amending the Constitution were motivated by being property owners.

Parliament has offered no indication of what broader model it’s proposing, meaning many of the motivations for changing the Constitution are inspired by hope for change but lack grounding in law and policy.

The future of communal land under the trusteeship of traditional authorities has already become a key issue after King Goodwill Zwelithini has warned against the state’s potential attempts to take over land under his Ingonyama Trust.

Chief Alphius Rathombo added further confusion to the discussion. He said his people had been moved by former VhaVenda king Mphephu and had been trying to reclaim their land in Limpopo throughout democracy. “It just keeps going around in circles,” said Rathombo.

The IFP’s Limpopo spokesman, Daniel Tlou was critical of the process. He said the hearings were too brief and the question on Section 25 failed to ask about what the future of South Africa’s land ownership should be. He said government had failed to assess the outcomes of its past redistribution efforts.

“You cannot close an old wound by opening a new one,” he said. “These injustices will never be undone.” DM