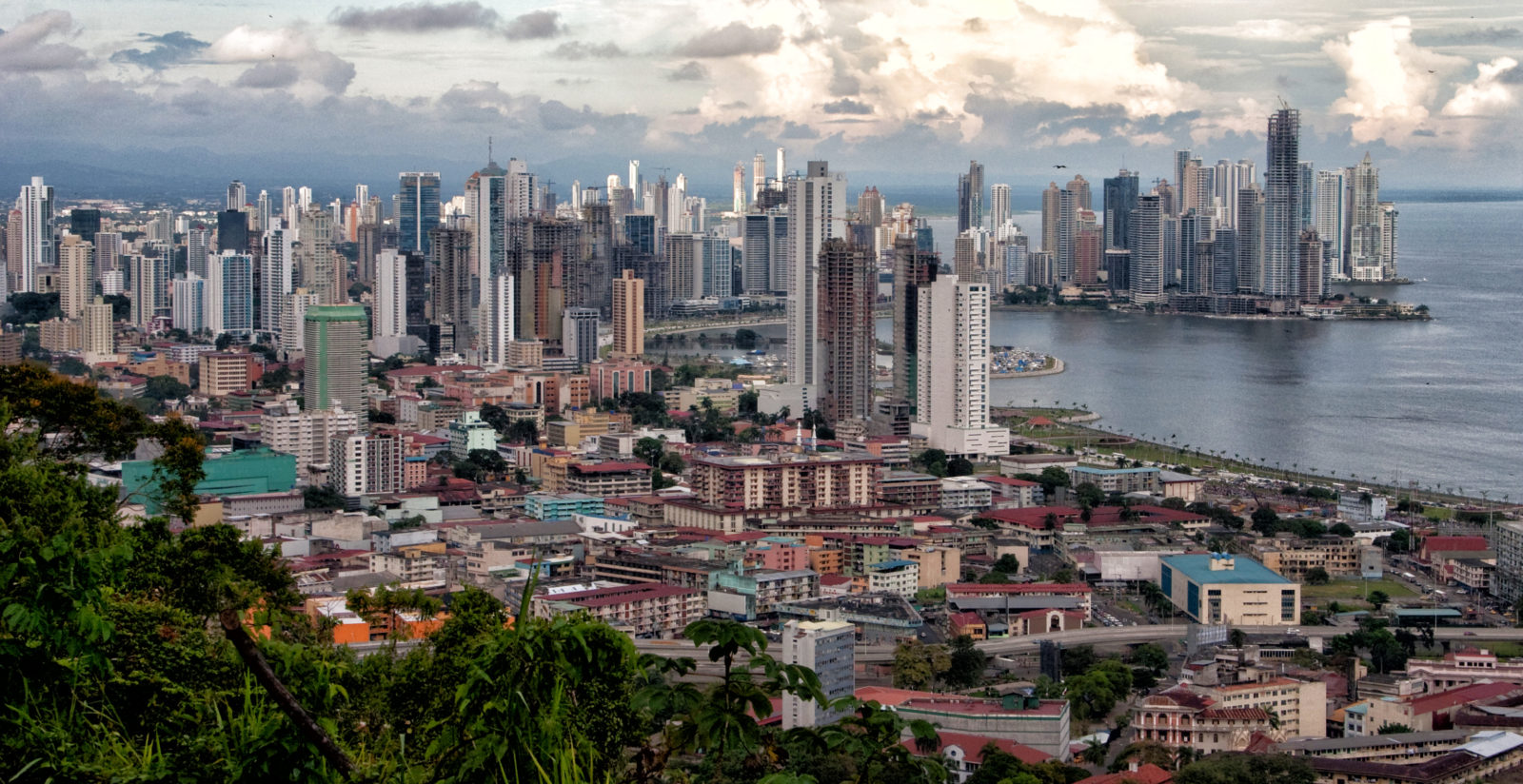 Panama was a strategic site for US interests in the Panama Canal in the 20th century, as it is today. The 77km waterway that connects the Atlantic and Pacific oceans opened in 1914. Today, this unique intercontinental waterway is one of four ‘connectivities’ which have been identified to ensure Panama’s contemporary development success, along with air, telecoms and finance.

In the canal museum in the Casco Viejo (Old Quarter) of Panama City is a fading photograph of its strongmen, Generals Omar Torrijos and Manuel Noriega. Torrijos, the leader of the military who took power in 1968 but never officially became the president of Panama and who held titles such as “Maximum Leader of the Panamanian Revolution” and “Supreme Chief of Government”, died in a plane crash in 1981. He had led a reformist El Gobierno Revolucionario (The Revolutionary Government) which included improvements in healthcare coverage and education.

Military power peaked during the regime of Colonel Noriega who seized control over the Guardia Nacional in 1983. Once Washington’s man, “Old Pineapple Face” had installed himself as de facto ruler in 1989 while running a parallel drug economy. His overturning of the electoral process, anti-Americanism and links with Colombian drug cartels prompted a US military intervention on 20 December 1989.

Noriega’s asylum in the Holy See embassy was ended 10 days after the US bombarded the building with heavy metal rock music – invasion by Van Halen. The generalissimo was later convicted and sentenced to 40 years imprisonment in the US on drug trafficking charges, dying in 2017 having been repatriated to Panama to spend his last days in a small white prison alongside the canal.

As the politics settled, Panama transformed to become one of the fastest expanding economies worldwide, growing from a GDP of $1-billion to $55-billion in 50 years. From 2003 growth has averaged over 8%, more than double the regional norm. Growth is expected to remain high with large-scale public investment with the construction of a second Metro line and new airport terminal along with the increased traffic from the $8-billion canal expansion project, opened in 2016.

This is backed up by increasing private sector investments, including in logistics, tourism, financial services and mining. The latter centres on Cobre Panama, a 350,000-tonne per year, $6.3-billion copper project near the Caribbean coast, the largest currently under way worldwide. When it comes on stream in early 2019 it will add $2-billion to Panama’s export revenues.

Nicolás Barletta served as president of Panama from 11 October 1984 until 28 September 1985 when he departed over the military’s increasingly influential and violent role in the Central American state. Bartella’s “separation” (he says, he refused to give the military the satisfaction of his resignation) proved the beginning of the end for General Noriega.

A University of Chicago-trained economist, and former World Bank vice-president, Barletta went on after his short-lived presidency to serve as head of the canal authority.

“Panama,” he says, “is a tiny market of just four million people, a corner of Mexico City, Buenos Aires or Sao Paolo. But what a corner we have! As a small economy, we have to be an exporting economy, with which to generate income to import everything we cannot grow.”

The economy is based, in his view, on four “connectivities”: maritime (through the canal), air (through the Panamanian-based airline Copa which flies to 74 destinations, with 13 million transit passengers annually through Tocumen airport), telecomms, and financial (with 90 banks in Panama with assets of over $120-billion).

While services make up 83% of GDP and 90% of exports, this is spread across these and other sectors, including tourism. The number of international visitors has increased consistently, from 520,000 in 2011 to over two million in 2016. Annual receipts in this sector have increased tenfold to over $5-billion this century.

“The advantage of a concentration of services,” Barletta says, “is that the revenues are more stable in volume and pricing than natural resources.”

This is assisted, too, by dollarisation, where interest rates remain low, “discouraging big speculative inflows”. Or as Ivan Zarak, deputy minister of finance in President Juan Carlos Varela’s adminstration between 2015-2018, puts it neatly:

“We are slowly diversifying into commodities.”

Panama has benefited from being an island of stability for various regional failings.

“It’s well known as the ‘Plan B’ of elite Venezuelans, cheaper and easier than Miami, but stable,” smiles Zarak.

Many émigrés invest in real estate, another reason why Panama consumes around double the amount of cement per capita per annum than the regional average.

Panama has also been highly pragmatic in dealing with investors. For example, the Cobre Panama project with First Quantum has been facilitated through a special 20-year, renewable “Law 9”, including a competitive tax regime. This is the type of stability required for an investment involving a 25km slurry pipe to the coast, and building a port and two 150MW power stations along with the extensive mining and processing operation. Interestingly, First Quantum’s similar proposals to build bespoke power facilities to supply its mines and develop the national grid in Zambia have been met with bureaucratic obstacles, where narrow interests have so far trumped national considerations.

It has not always been smooth sailing for Panama. In 2016 the Panama Papers revealed the isthmus as a popular tax haven. Ricardo Martinelli was elected president in 2009, promising to promote free trade, establish a metro, reform healthcare, and complete the canal expansion project started by his predecessor. He did all this, but in the process was accused of using public money for illegal surveillance, and of financial crimes, taking bribes and giving illegal pardons. He has just been extradited from the US to Panama to face these charges.

And while poverty has fallen by more than a half to under 20% since 2008, it remains high in the rural areas and especially among the indigenous comarcas. There are, too, widespread concerns about rising inequality.

And getting the politics right requires ongoing work.

“The dynamism was there during the Torrijos period in the 1970s,” says Barletta, who served the military strongman as Minister of Finance for seven years in a strangely military-led civilian regime. “Noriega was a blockage to this process,” says the former president, 79 in 2018.

After the US military intervention, the results of the May 1989 election, which had been overturned by Noriega, were reinstated. Elections are now held regularly and cleanly, a prerequisite for political stability. Panama scores highly on Freedom House’s rankings, with an aggregate score of 83/100 (where 0 = Least Free and 100 = Most Free).

In 2004 the presidential race was won by Martin Torrijos, son of the late leader, on his second attempt. Torrijos, 55, sees democracy “as essential” to the country’s success.

“Although my Dad came to power through a military coup,” he explains, “the old system clearly was not working. He implemented a new constitution, and a new approach to education and housing among other social programmes, while also uniting the country around its sovereignty over the canal.”

During his own presidency, given that he won at his second attempt, he says:

“We were able to plan ahead, and prepare for fiscal and social security reform, and to tackle the canal expansion project.”

But it was not easy going.

“What we found was not what we expected. We had no statistics to measure things, which made both finding the right tools difficult as well working out where to apply them,” especially in tackling “the social agenda”.

“I think my father would, on the one hand, be very proud of our achievements. On the other, he would be looking at the underprivileged, and asking why we are not more successful in translating social progress to others and to other cities.”

As with his father’s agenda, Torrijos believes that a similar type of reform is needed today.

“It’s hard not to succeed in Panama, given our geographic location. But even as we are growing the economy fast, so too is unemployment increasing, as our GDP growth is mainly in capital intensive sectors. Our next step has to be about how to build a better workforce and democratise, not only government, but economic opportunities within the country.”

Dr Mills was in Panama to research a new book on African democracy. A Brenthurst Discussion Paper on Panama appears today, available at www.thebrenthurstfoundation.org