While the 4x4 double cab big boys are driving sophistication – and prices – to new heights, those seeking a more pragmatic balance of value and versatility need to look elsewhere. In X-Rider trim, the Isuzu KB250D Double Cab could fit the bill.

South Africa is bakkie country. The most popular pick-ups often rival passenger cars on the local best-seller lists, and they’re endemic on our roads: from multi-lane highways to rutted farm tracks.

While the humble bakkie started out as a Spartan workhorse designed around payload and load box parameters, it’s evolved into an altogether different animal. Yes, those basic sloggers are still at the core of the segment, but the top-end double cab 4×4 models are now hogging the limelight. 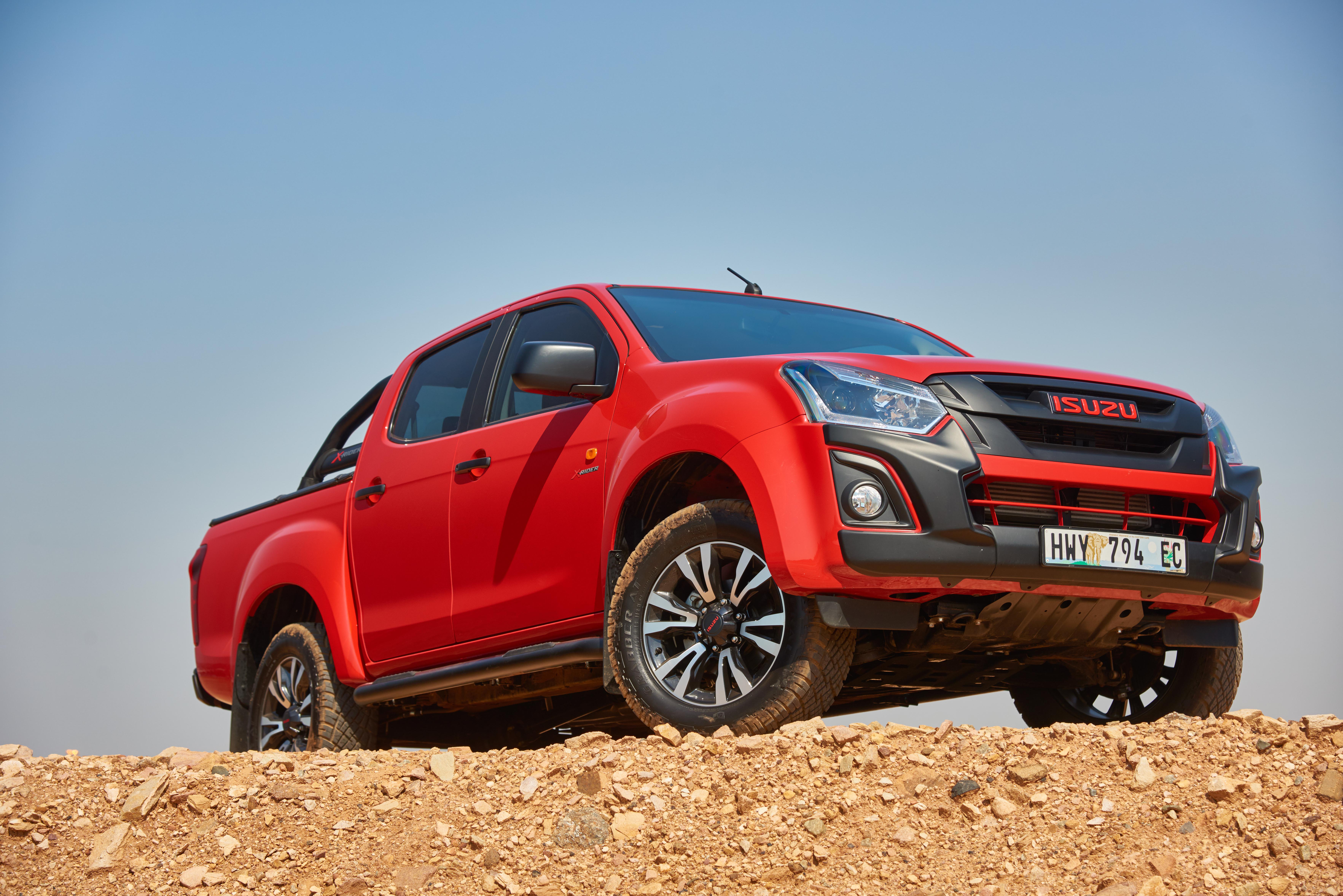 Who would have thought that you could spend more than R800k on a double cab bakkie? Or that you’d be able to buy a bakkie with a Mercedes-Benz badge, for that matter?

Not everyone can indulge in such lofty double cab bakkie aspirations, though. Times are tough, and getting the most bakkie bang for the buck is what really matters to most.

If value is a key prerogative, you’ll have to ignore the top-tier, high-power 4×4 double cabs that head up the various brand offerings in favour of smaller-engined, less lavishly equipped models.

Heavy hitters Toyota and Ford both field double cab contenders in this sub-R500k category: Ford’s candidate is the Ranger 2.2 XL-Plus 4×4, while the Toyota offering is the Hilux 2.4 GD-6 SR 4×4.

Isuzu, now an independent operation following the disinvestment of General Motors, is another established brand in the bakkie segment: its KB one-tonners enjoy a particularly loyal following. 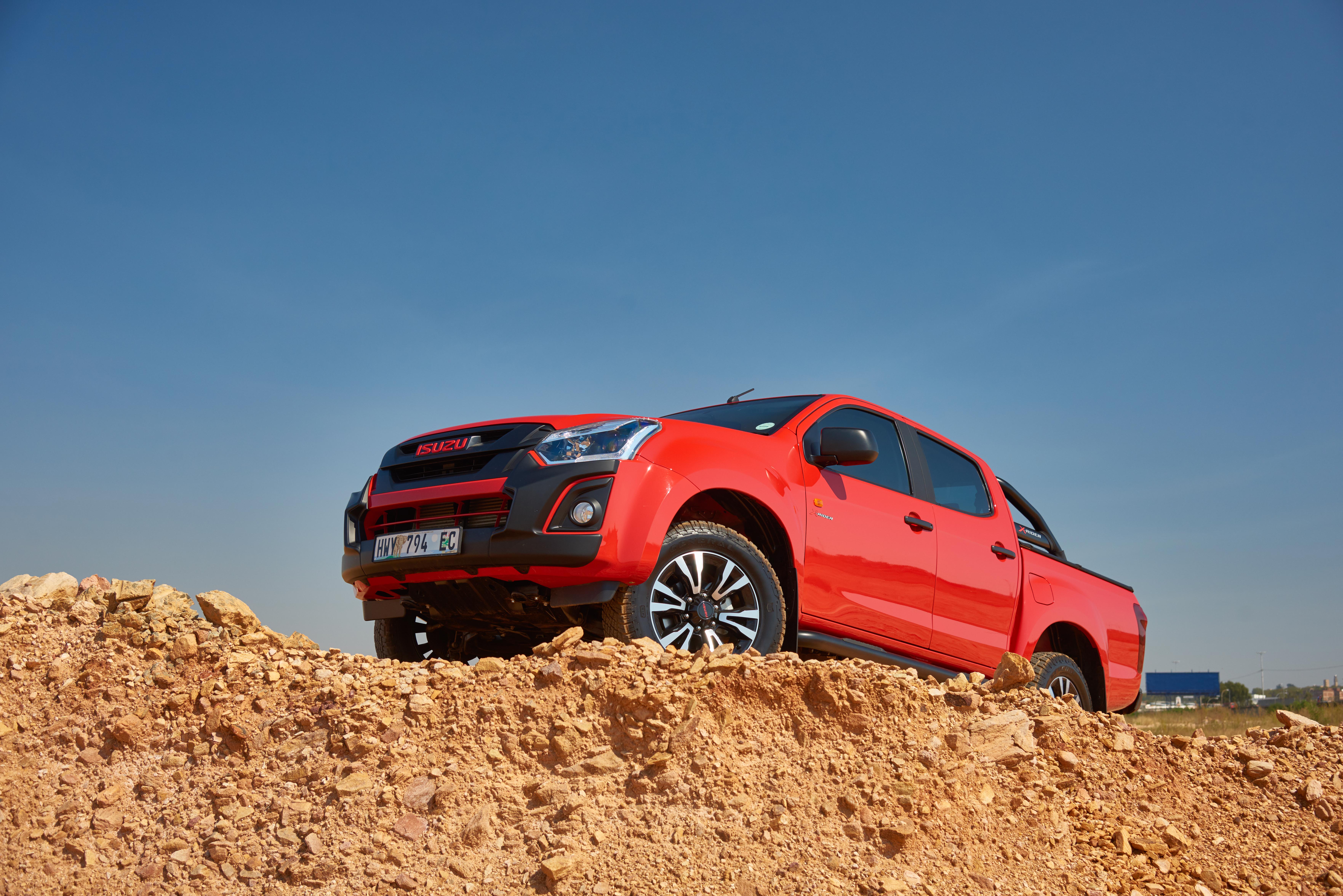 By adding a package of aesthetic embellishments under the X-Rider moniker, Isuzu has attempted to add some aspirational sheen to its midrange KB250 D-Teq 4×4 double cab offering, while keeping pricing within reason.

In styling terms, the KB is somewhat more restrained than its competition, and specifically the Ranger. But the X-Rider extras go some way to adding some welcome lustre.

The package includes 18-inch alloys with fatter, low-profile rubber, and black finishes for the front bumper, side steps, roll bar and B-pillars. Inside, the extras include leather upholstery with red stitching and crimson X-Rider headrest logos. 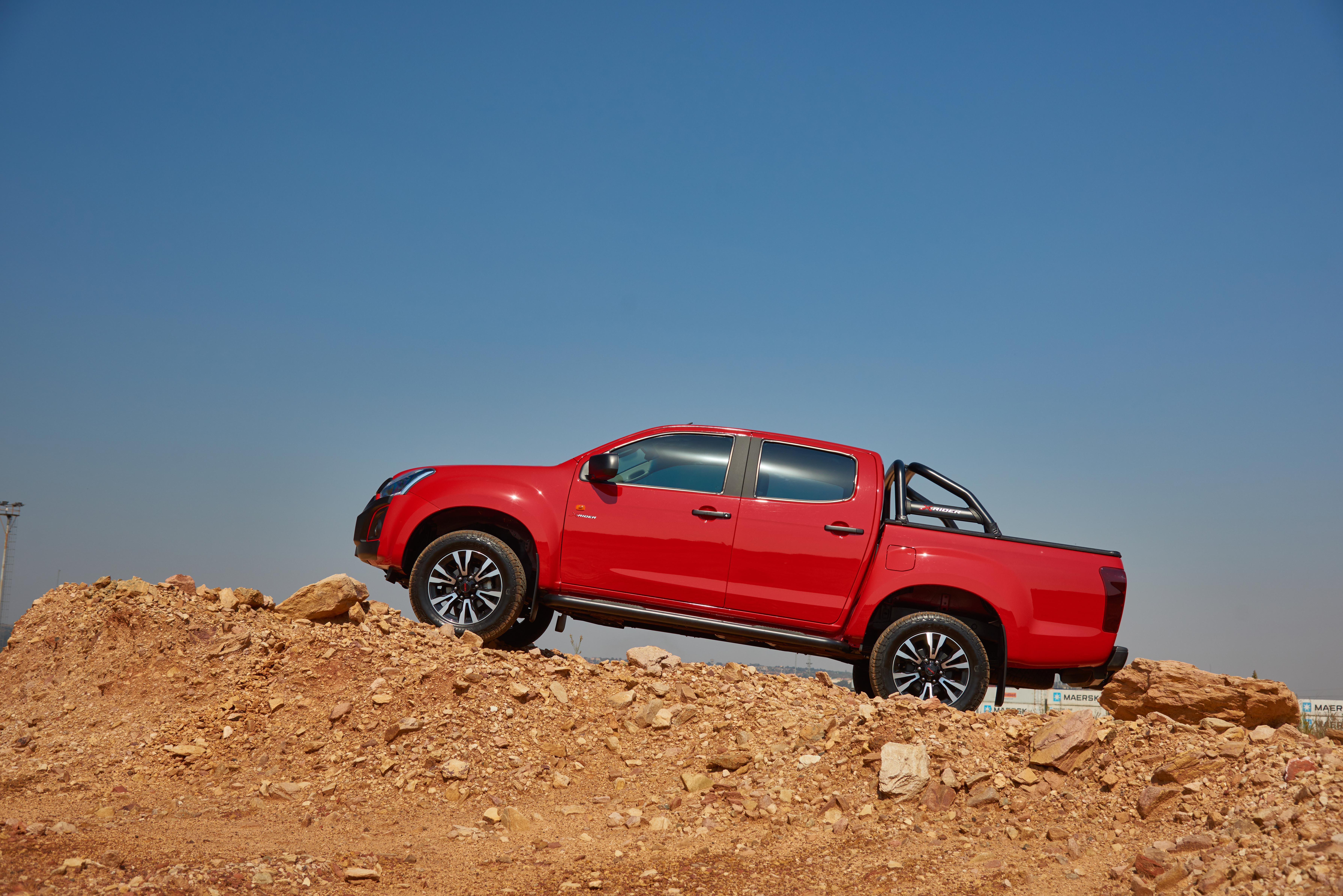 The red bits can look a little garish, but they do lift an otherwise dour interior, while gloss black detailing adds a subtle touch of sophistication.

The X-Rider also boosts the standard equipment list with some meaningful additions. High-intensity headlights with daytime running lights are a worthwhile upgrade, as are items such as the remote keyless entry, the multifunction steering wheel, and air-conditioning.

The heavy-duty tow bar, usually an added-cost accessory, is part of the X-Rider package, as are the front fog lamps. There’s a tidy tonneau cover too, but it’s not theft-proof, and those intent on leaving valuables in the load box will need to invest in a lockable canopy or cargo lid.

Unlike top-end models, the X-Rider has to make do without a touchscreen interface for the infotainment system, and the black dashboard arrangement is a sea of old-school plastic, with nary a soft surface in sight. 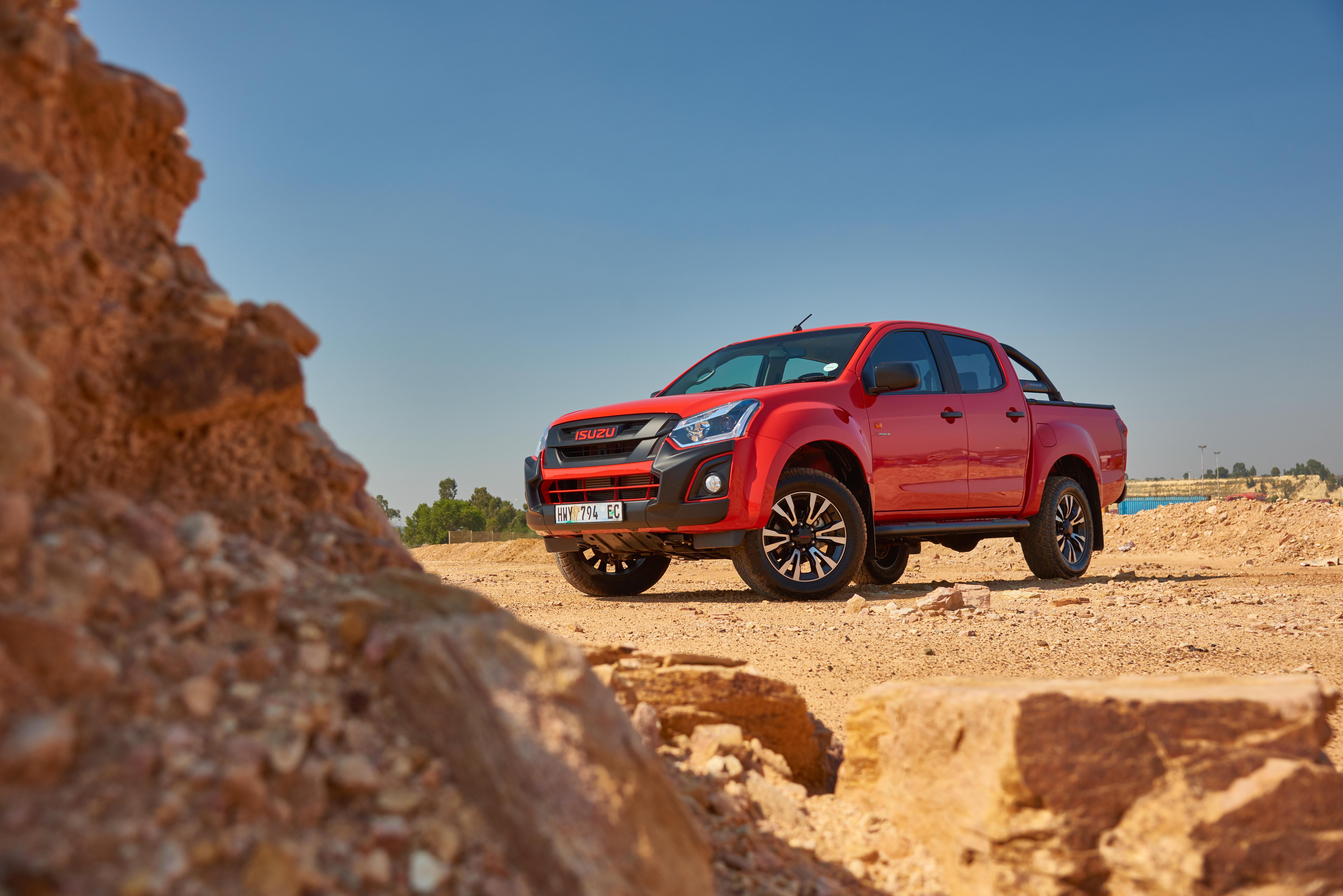 That said, ergonomics don’t suffer: the control set is well arranged and user-friendly, and the view of the instruments with their red, clearly legible graphics, is exemplary. A basic but useful trip computer is flanked by large dials for speed and rev count.

Apart from the X-Rider extras, the amenities include a CD receiver with integrated Bluetooth for streaming and telephony, central locking, and electric windows and mirrors.

Despite the steering wheel being tilt-adjustable only, it’s still easy to find a comfortable driving position, thanks to a height-adjustable driver’s seat. The front bucket seats are well formed for both support and comfort. 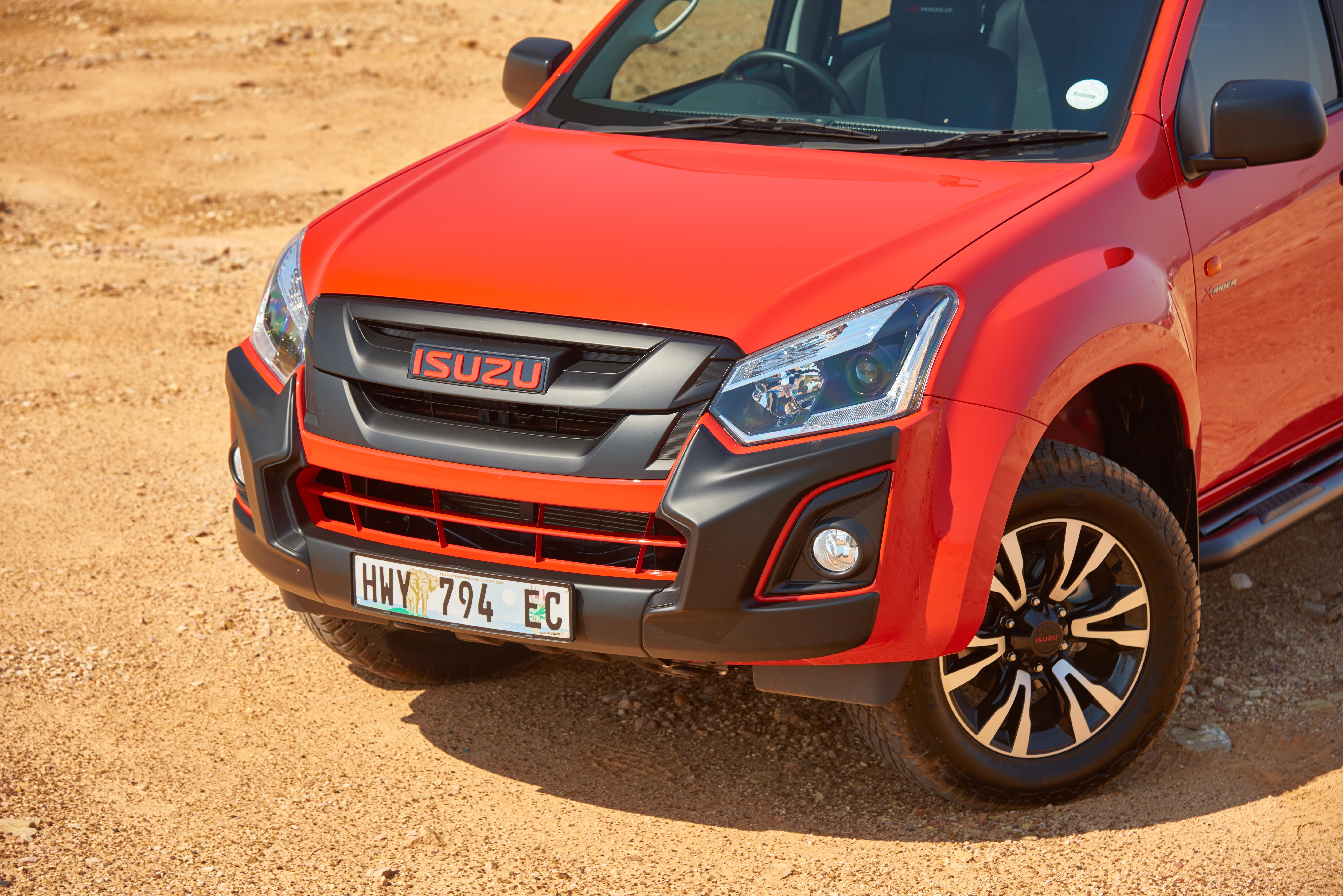 The cabin is a spacious place, too – important from a family use perspective – and the rear bench seat offers plenty of head, leg and shoulder room. As for safety, dual front airbags join seat belt pre-tensioners, ABS brakes, hill descent assistance, and electronic stability control on the list.

On paper, the KB250D’s engine is one of its weakest attributes. The 2,499cc four-pot D-Teq turbodiesel only musters 100kW and lacks refinement. The 320Nm of max torque is a redeeming factor, offering plenty of low-down lugging power, and ensuring better than expected in-gear tractability.

Getting off the mark can be tricky, especially at Reef altitudes, where turbo lag can catch you unawares. You need to pile on enough revs to spool up the turbo before easing out the beefy clutch – if not, the engine struggles to come on song. 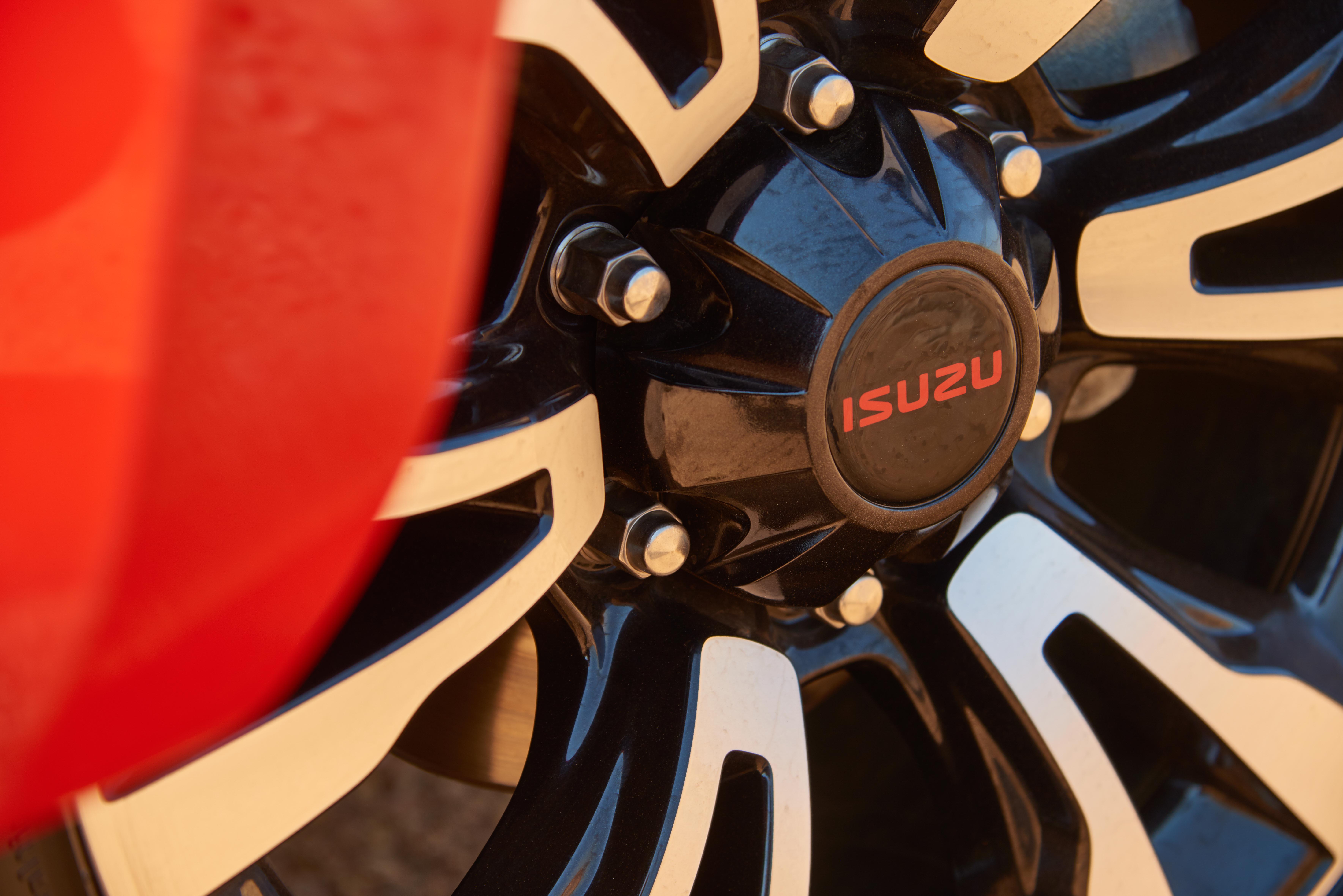 The five-speed manual gearbox becomes recalcitrant when rushed, and has to be approached with just the right mix of determination and patience, particularly when cold. However, the ratios suit the power unit’s characteristics well, and manage to make the most of the shove and twist on offer. 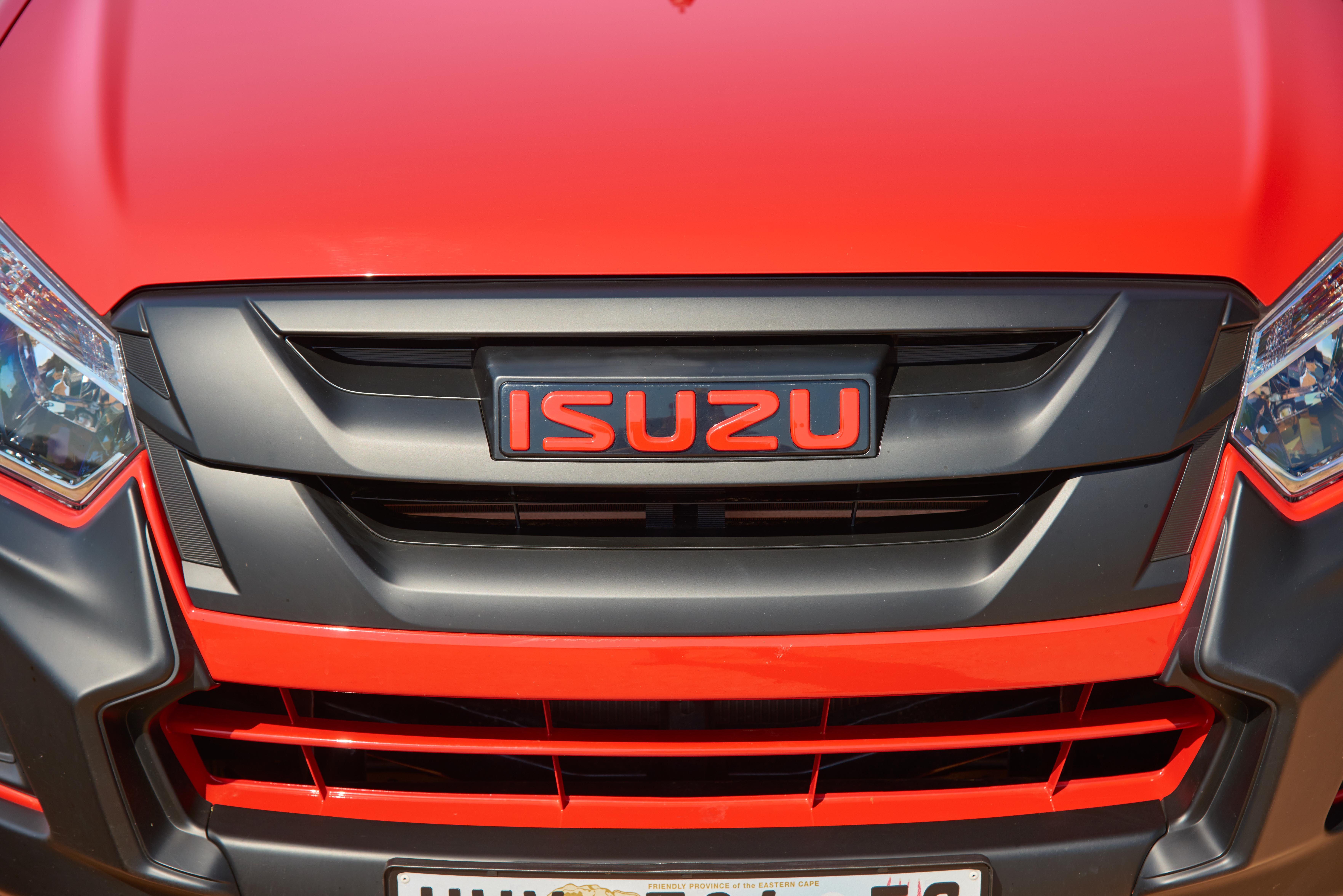 As a result, the KB250D never feels at a dynamic disadvantage, despite having to cope with just over two tons of vehicle mass. Don’t expect any land speed records, and if you hook up a caravan, the going will be leisurely at best.

But in and around town, the Isuzu offers adequate pep, and it’s a comfortable cruiser at legal highway speeds. The engine’s agricultural soundtrack can become intrusive when pressing on, and the off-road biased General tyres add some road noise, too – but then, this is a double cab bakkie, and not a luxury sedan.

By the same token, the ride is on the firm side, especially without a load on board, but never to the extent that progress becomes jarring. 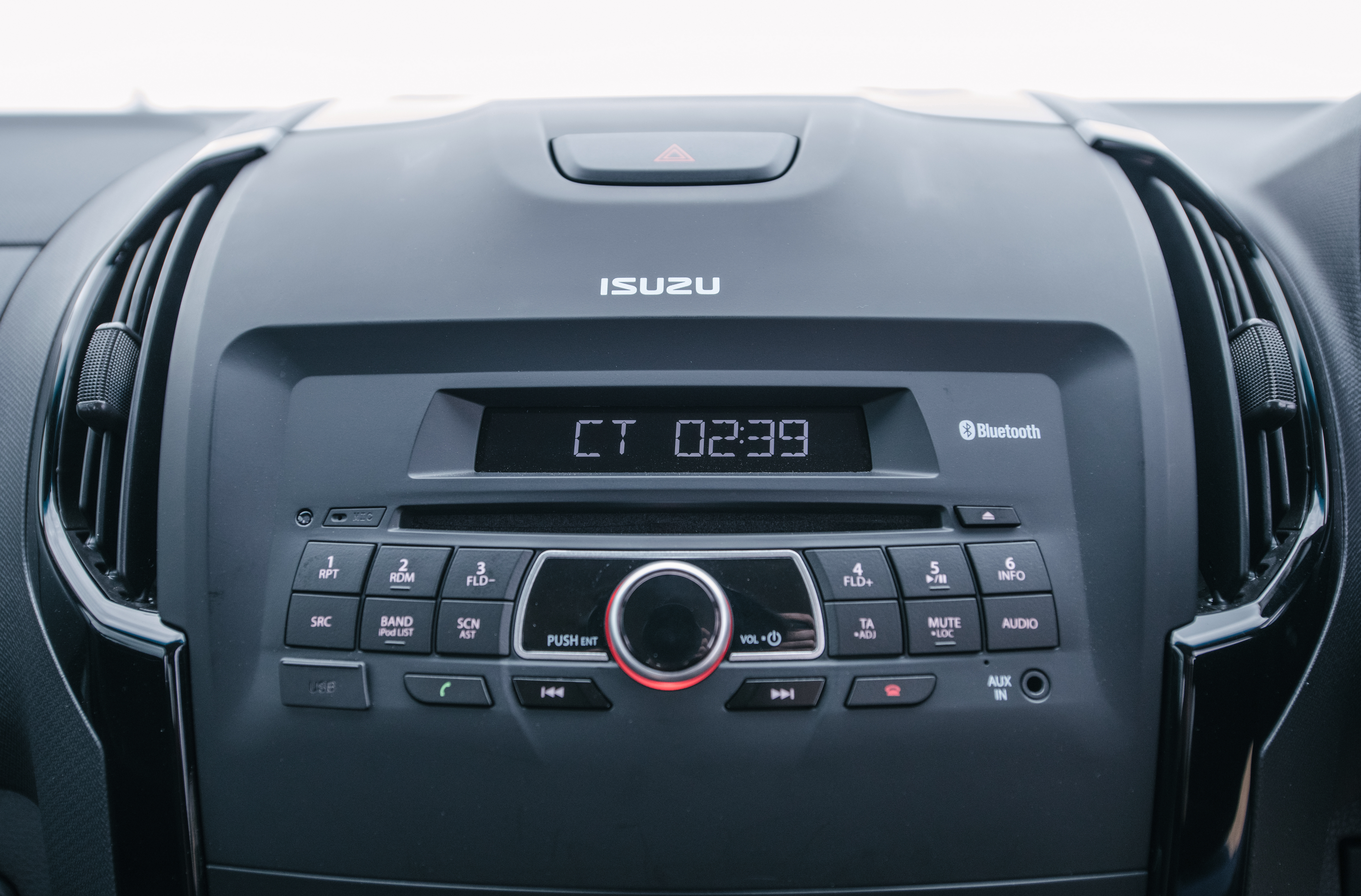 The Isuzu shines at its brightest when heading off the beaten track, though. This is a competent off-roader, and it tackles the rough stuff with a certain glee that’s both enjoyable and confidence-inspiring.

Switching to four-wheel drive is as simple as turning a dial on the centre console, which brings the front wheels into play, adding welcome traction and composure when encountering mild all-terrain, including loose gravel and sand. 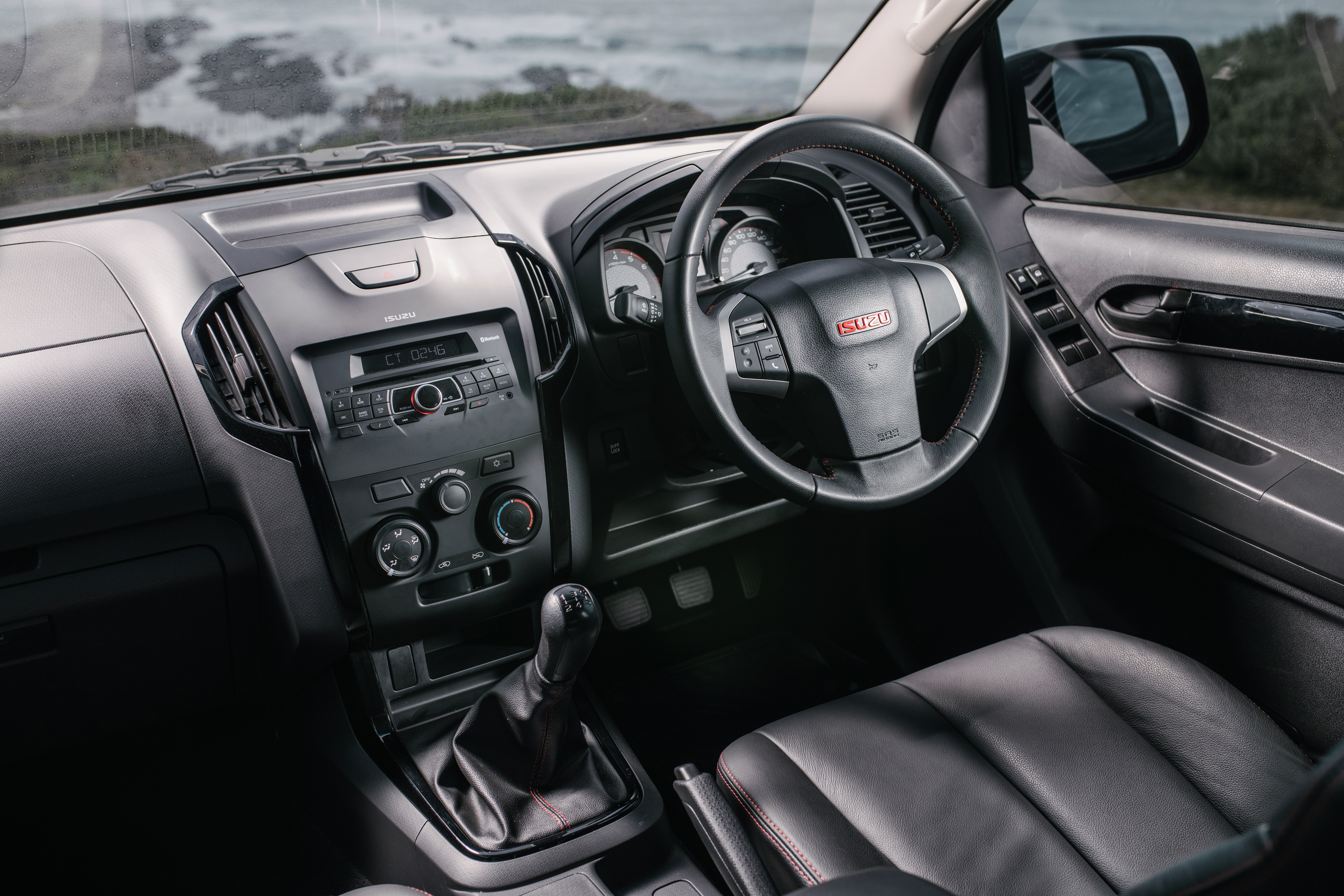 The raised ride height and 228mm ground clearance not only ensure a commanding view of the Isuzu’s surroundings, but also allow it to negotiate obstacles with ease.

If the going gets really tough – think steep gradients, dizzying descents, wheel-sucking mud, axle-twisting undulations– selecting low range will turn the KB into an impressive go-anywhere machine. More often than not, the driver’s capabilities will be the real limiting factor.

The General Grabber tyres excel in these conditions, and the low-range lugging power of the KB will allow it to conquer the seemingly impossible – as long as the driver is confident and experienced enough to make the most of the double cab’s capabilities.

Depending on the conditions, lag can still be an issue, while an unwieldy turning circle of 12.8m means tight manoeuvres are tricky. That goes for closely spaced parking slots too, of course. 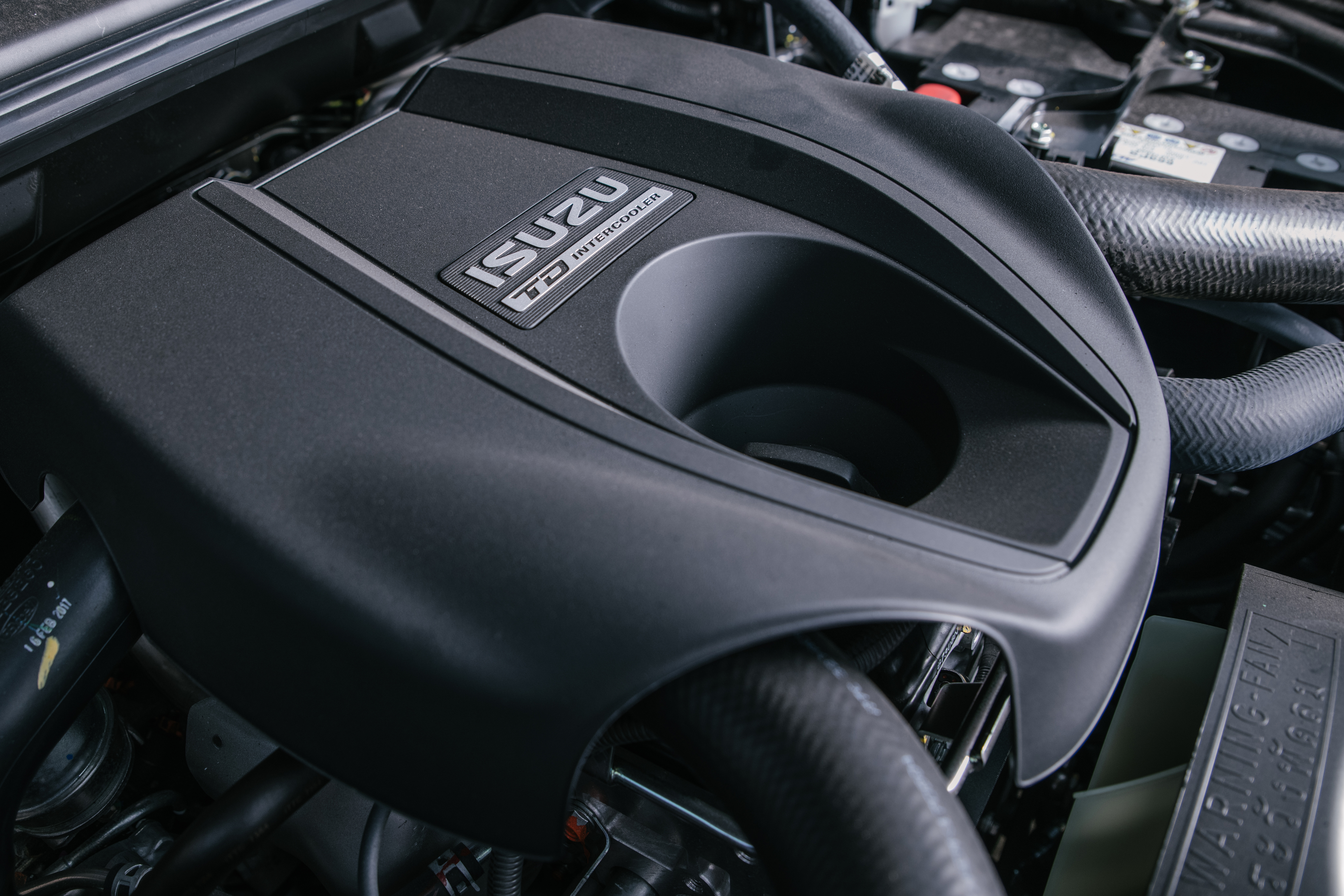 However, the Isuzu excels at conquering difficult terrain, and lives up to its 4×4 promise. More importantly, its ability to cope with a broad spectrum of conditions underlines its overall versatility.

At R454,100 the Isuzu KB250D X-Rider is more affordable than its Ford and Toyota mid-spec double cab 4×4 rivals, although it lags behind both in the power and torque stakes. If it’s all about budget, there’s always the more basic KB250D 4×4 Hi-Rider, which represents a R35k saving, but the X-Rider offers a stronger value proposition. 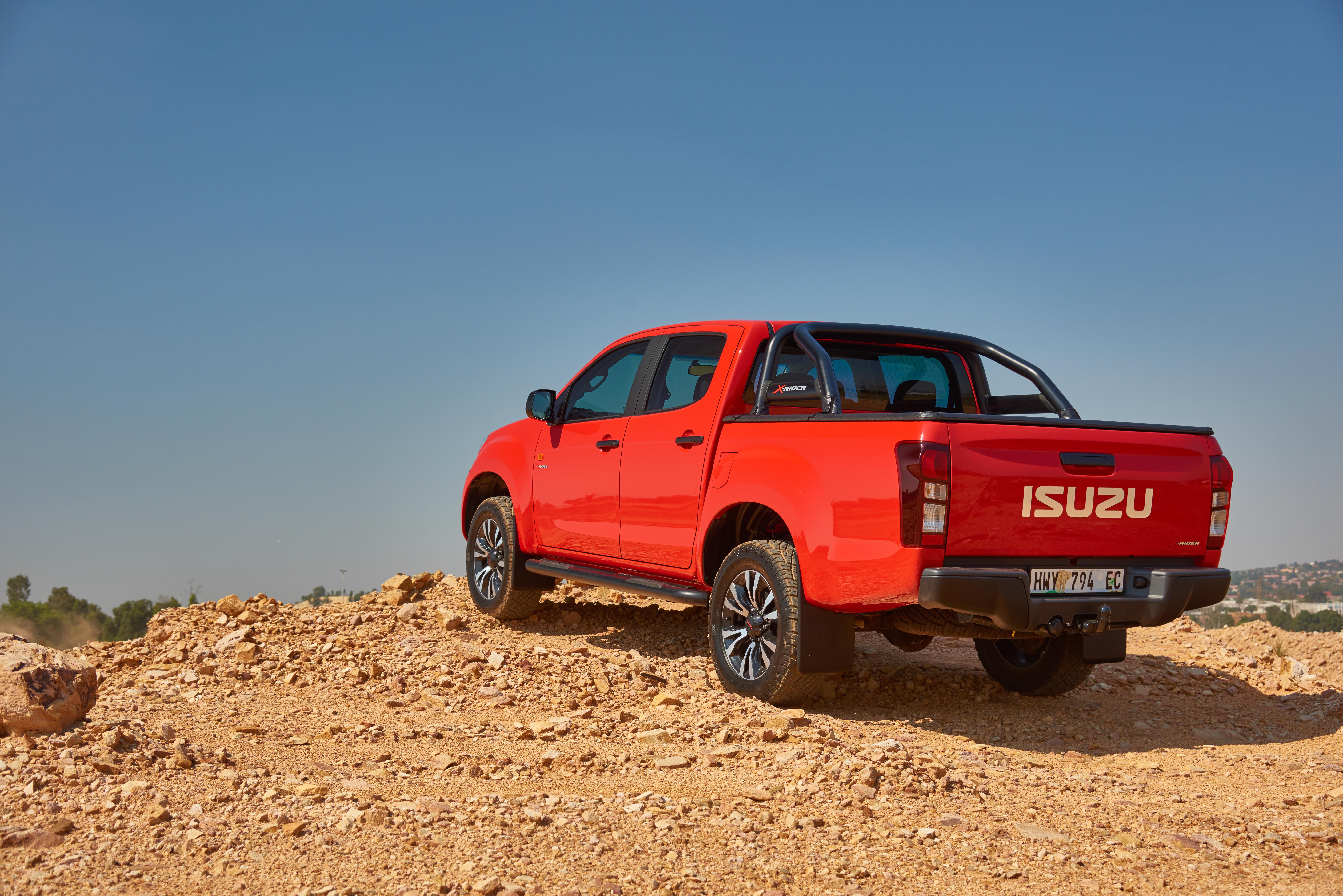 Versatility and value are king – plus great off-road capability.