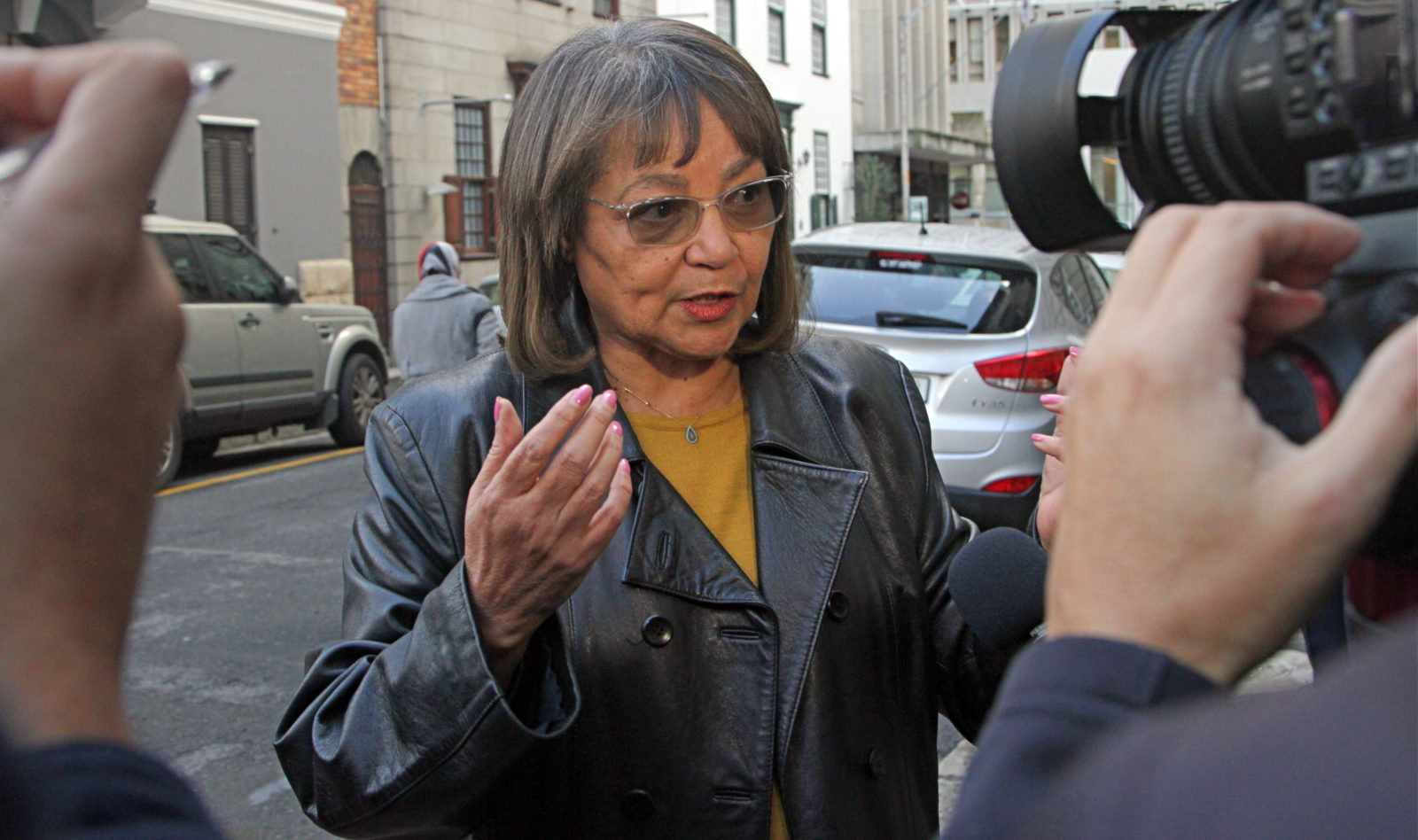 Patricia de Lille remains a DA member – and mayor of Cape Town. This was the unanimous judgment of the Western Cape High Court, delivered on Wednesday. The three-judge bench said it was not necessary to consider constitutional arguments in handling the matter. What was critical, they found, was that the DA had not properly followed its own procedures in stripping De Lille of her party membership.

“Viva!” came a cry from the public gallery.

Patricia de Lille had just had her membership of the DA, and position as mayor of Cape Town, reaffirmed by a full bench of the Western Cape High Court.

Reading the judgment summary, Judge Andre le Grange said that the federal legal commission of the DA which stripped De Lille of her party membership in May had been “improperly constituted”.

While the party’s own constitution required the DA to have De Lille’s case considered by “as objective as possible” a panel, composed in part of “legally-skilled people”, this was not complied with.

In addition, however, the DA had further erred by not giving De Lille sufficient opportunity to rebut the charge against her and submit evidence in her own defence.

After the party’s federal legal commission found that De Lille had ended her own party membership when she told 702radio host Eusebius McKaiser on 26 April 2018 that she intended to “walk away” after clearing her name, De Lille was given just 24 hours to respond.

This too, said Judge Le Grange, amounted to a failure of the DA to comply with the provisions of its own constitution.

“Such non-compliance was material, and not trivial, as the party tried to suggest,” Judge Le Grange said.

Due to these two instances of material irregularity, the judges ruled that the DA’s determination that De Lille was no longer a party member was “unlawful, invalid, and set aside with costs”.

A beaming De Lille told journalists after the judgment that the DA now had to “start from the beginning” in the party’s attempts to dethrone her.

“I’ve been fighting for a fair process, and a due process. That’s what my fight was all along,” De Lille said.

She is back in court on Thursday to challenge the findings of a DA internal report which found her guilty of nepotism and misconduct.

“We fought for justice in this country. Many of them don’t understand the word ‘justice’,” De Lille charged. “But thank God we’ve got an independent judiciary that will protect the rights of all South Africans.”

The DA, meanwhile, indicated the party’s intention to appeal the judgment.

Deputy federal executive chair Natasha Mazzone told Daily Maverick after court that it was notable that the judgment dealt with procedural, rather than substantive, issues.

“We don’t believe it’s the correct understanding of the Democratic Alliance constitution,” she said.

Regardless of ongoing court action, however, Mazzone said that De Lille would now be subjected to the party’s internal disciplinary proceedings once more.

“Now that Patricia de Lille remains a DA member according to today’s judgment, disciplinary inquiries will continue against her,” she said.

The judgment is likely to intensify pressure on the DA’s federal executive, led by chair James Selfe, for choosing to rely on the party’s obscure membership cessation clause as a way of getting rid of De Lille.

De Lille’s lawyer, Dali Mpofu had argued that the DA’s conduct in dealing with De Lille had been characterised by “bad faith” and offended constitutional values.

Mpofu and his colleague Johan de Waal contended that the clause in the DA’s constitution which the party invoked to oust her violated the rights to freedom of expression, freedom of association and the right to political participation in the party of one’s choice.

Acting for the DA, Advocate Sean Rosenberg had disputed that any of De Lille’s constitutional rights had been violated, arguing that the DA had the right to “disassociation” when it came to party members whose views and actions were inconsistent with the party’s own.

Rosenberg had maintained that the DA did not need a “good reason” to remove De Lille from office, and that all was required was the fact that De Lille had ended her own party membership when she told 702that she intended to “walk away”.

Yet ultimately, Judges Le Grange, Mark Sher and Pearl Mantame did not find it necessary to deal with either the constitutional arguments, or the question of the validity of the DA’s membership cessation clause.

Instead, where De Lille’s lawyers were successful was in arguing that the process followed by the DA to get rid of De Lille was procedurally unfair in a range of aspects, from the composition of the federal legal commission panel to the amount of time De Lille was given to respond to the notification of her membership cessation.

What sunk the DA was its lawyers’ argument that it did not matter whether the party had erred procedurally.

Advocate Rosenberg argued that those matters were effectively irrelevant and that the court could not demand “mechanical compliance” with every technical regulation.

Rosenberg even acknowledged that it was possible that the court would find that the DA had erred procedurally – but suggested that this could not impact upon the central fact that De Lille’s party membership had indeed ceased.

The judges begged to differ, stating in their judgment that the DA’s procedural non-compliance was so significant that it rendered the other aspects irrelevant from their perspective.

In a statement after the judgment, the DA indicated that the party was not giving up: it would once again seek to move a motion of no confidence against De Lille in the Cape Town City Council.

It will doubtless face opposition from the ANC in the Western Cape, which released a statement on Tuesday lambasting the “frantic and maniacal attempt of the Democratic Alliance to rid itself of its mayor”.

De Lille, meanwhile, took to Twitter to express delight at the judgment.