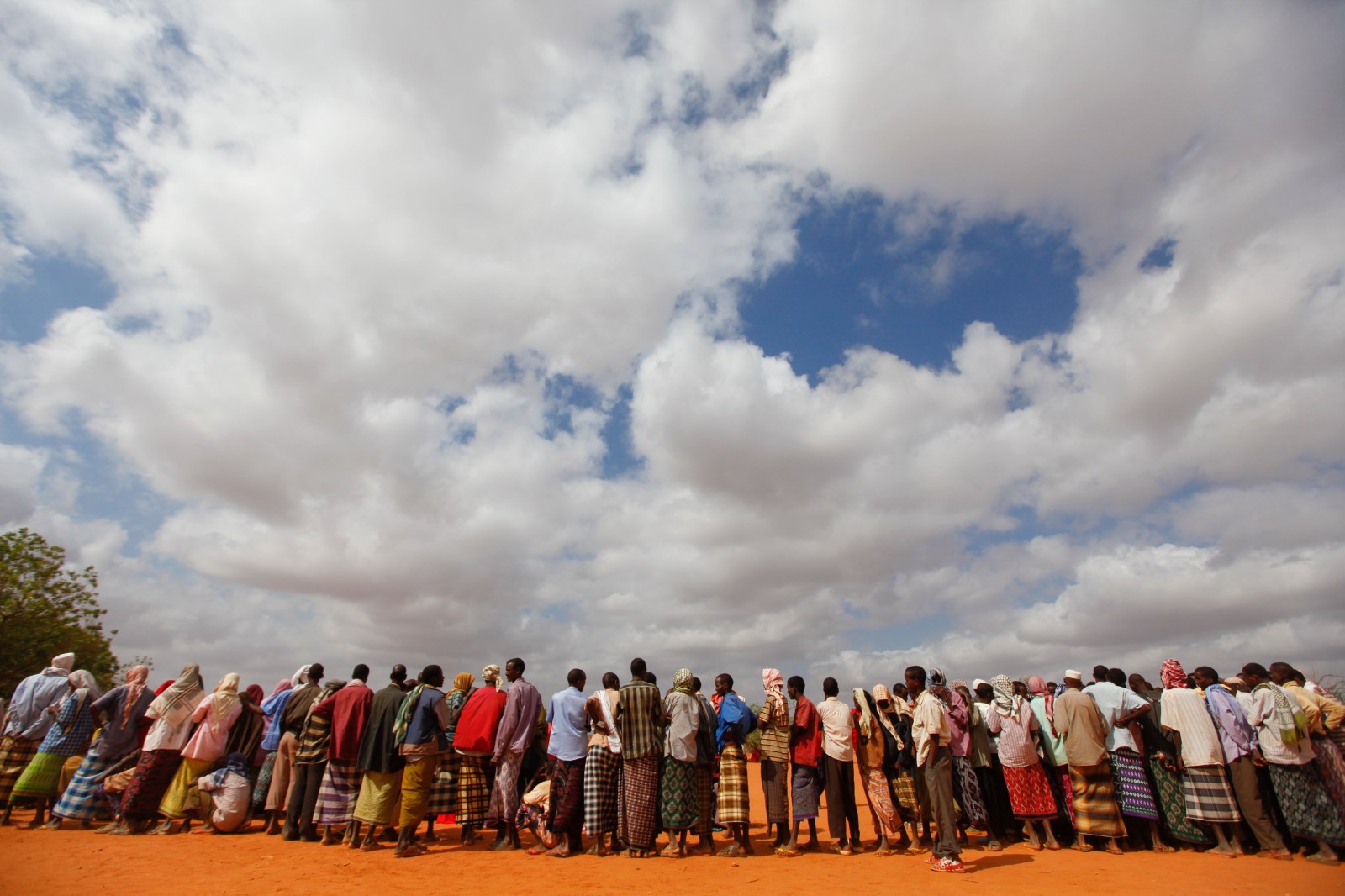 Newly arrived refugees who had fled famine-hit Somalia waiting in line at a reception at Ifo camp, one of three camps that make up sprawling Dadaab refugee camp in Dadaab, northeastern Kenya, 02 August 2011. EPA/DAI KUROKAWA

The EU’s (European Union’s) partnership accord with the African, Caribbean and Pacific (ACP) countries – also known as the Cotonou Agreement of 2000 – expires in February 2020. As negotiations for a new deal are set to begin in August this year, all eyes will be on the AU (African Union) Commission chairperson Moussa Faki Mahamat at this week’s summit when he presents a report on the African Common Position on the Cotonou Agreement after 2020.

While EU funds are crucial for Africa, the AU and sub-regional organisations should use the renegotiation process to prioritise Africa’s interests. One of the issues to be negotiated before the agreement expires is how to reconfigure the EU’s African Peace Facility (APF), which has made most of Africa’s peace initiatives possible.

Since its establishment in 2004 in line with Cotonou, the APF has provided over €2.3-billion in support of African peace initiatives. It was established in 2004 following the AU’s request for support for African peace and security efforts at the AU’s Maputo summit in July 2003.

The African missions in Somalia, Sudan, Mali, the Central African Republic and Gambia, among others, were all made possible by the APF – together with some irregular support from other external actors. APF funds have also supported the institutional development of the AU’s African Peace and Security Architecture, including the payment of staff salaries at the AU Peace and Security Department.

This extensive and consistent support to the AU and regional bodies highlights the indispensable role of the EU in African peace initiatives. Peace and security remain a priority for both the EU and the AU, and they are thus exploring ways to reconfigure the APF post-Cotonou.

While the EU will surely continue funding African peace initiatives, there are three major trends for future EU support. First, a shift from crisis-driven support to institutional development. So far 90% of APF funds have been used to fund African peace support operations, with the AU Mission in Somalia (Amisom) taking the lion’s share of over €1.3-billion.

An EU-commissioned report shows that negotiations on the future of the APF will probably see a slight shift in focus towards the funding of institutional development to implement the African Peace and Security Architecture, rather than prioritising crisis-driven support.

The focus is likely to be on capacity-building, conflict-prevention and mediation initiatives. The AU and its member states should use the new funding arrangement that will be negotiated to ensure all African Peace and Security Architecture tools are put into operation. This includes developing greater cohesion between the AU and Regional Economic Communities in implementing peace initiatives.

Although crisis-driven support will continue to dominate because of the high cost of peace operations, the EU will in future take a more cautious approach by determining clear exit strategies prior to committing funds and focusing more on providing targeted support packages for African missions.

This is due to lessons learnt from Amisom, where the EU got trapped in a long-term mission with no clear exit strategy. The mission started with a monthly budget of €700,000 for troop allowances in 2007 in the hope of a UN (United Nations) takeover the same year, but by 2016 it had reached around €20-million per month.

The EU thus now prefers to provide support packages to African missions; a shift that is already apparent in its support package for the Multinational Joint Task Force against Boko Haram (MNJTF) and the G5 Sahel Force. For the latter, the EU provided €100-million for logistical support. Such an approach enables the EU to avoid participating in open-ended missions with no clear time frame. It also highlights the EU’s call for burden sharing in African peace operations.

The second point to look out for is the tension between Africa’s determination to take ownership of peacekeeping on the continent and the fact that the African Peace Facility has created a high level of dependency on the part of African actors.

As the negotiation process draws near, rhetoric from the EU and the AU points to a desire to develop a partnership of equals; transitioning from a donor-recipient relationship to one of mutual respect. But there cannot be an equal partnership if African actors remain recipients of funds from the EU. EU member states are also growing increasingly critical of the donor-beneficiary approach and are challenging the AU to foot some of its bills.

The new 0.2% levy on eligible imports, devised by the AU to raise funds, is intended to elevate African actors to the status of equal partners, with 25% of funding for peace operations in Africa to be generated locally. However, the implementation of the levy is still in its infancy.

The AU hopes the UN will cover the remaining 75%, but the UN Security Council has consistently rejected similar requests to fund African-led missions such as Amisom and the G5 Sahel Force. So EU funding remains important for African peace operations, until African actors and the UN step up to the plate.

Finally, as migration has become a topical issue for EU member states, some of them have considered the possibility of using donor funds to get ACP countries to comply with their demands. One of these is for countries of origin and transit to prevent migrants from trying to get to Europe and to accept migrants sent back to their countries of origin. The EU warned that countries that didn’t co-operate wouldn’t receive EU funding.

While it is uncertain how these conditions will play out in the renegotiation of the APF, the AU and African countries must safeguard the human rights of migrants, including refugees. This includes ensuring the equitable application of international standards requiring all states to protect refugees seeking asylum without forcibly repatriating them.

Countries such as Uganda and Ethiopia, which host most of Africa’s refugees, have been providing asylum to migrants, and cases of local integration have been recorded in some African host countries.

African countries should also work with EU countries to address the racial overtones that affect migrants moving from Africa to Europe. This requires a significant shift from seeing the EU as an “ATM machine” to a partnership based on mutual interests.

While EU funding remains extremely important for Africa, the AU and its member states will in future have to significantly reduce dependency and strive for self-reliance when it comes to peace and security in Africa. DM