No horse named Morbid ever won this race

No horse named Morbid ever won this race 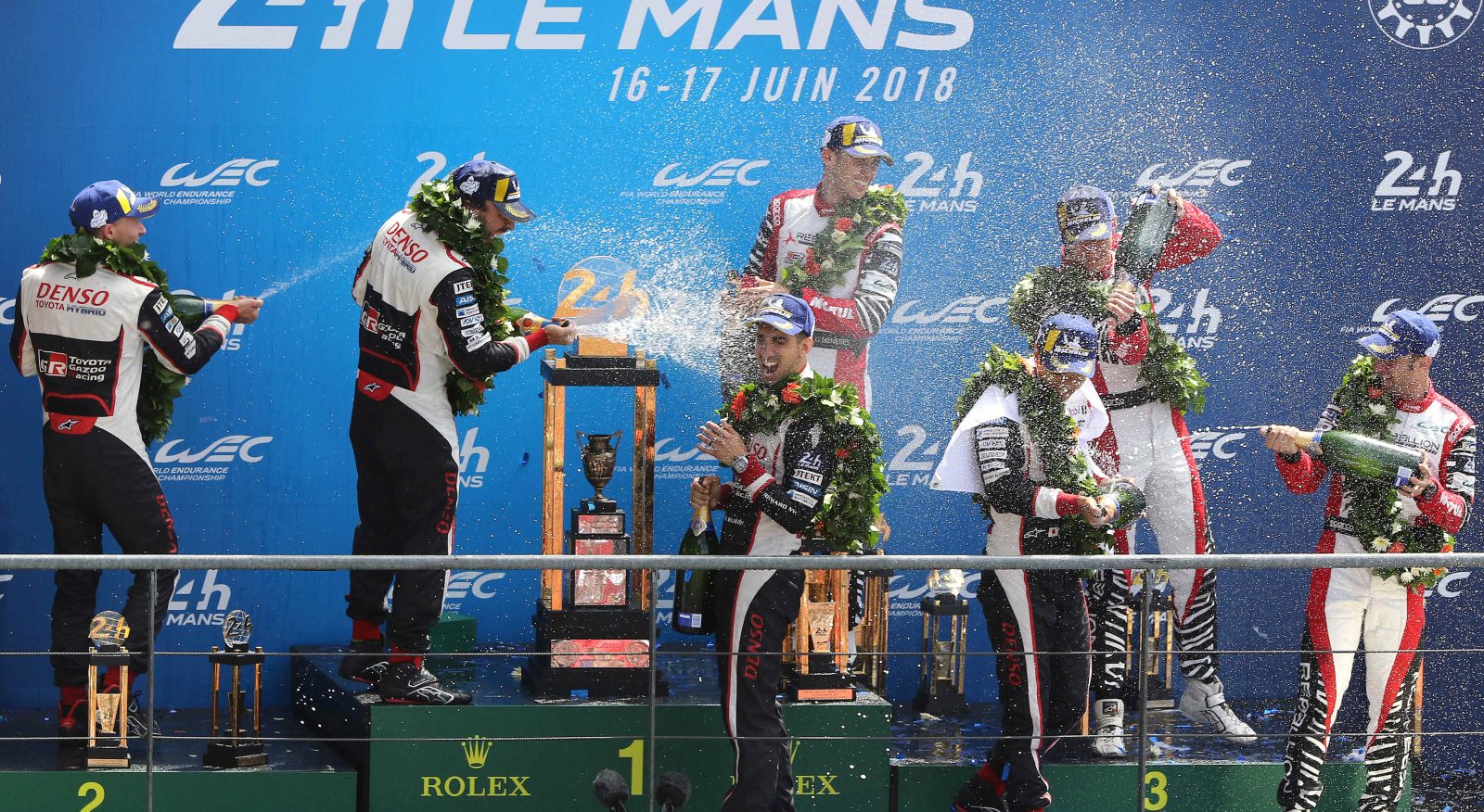 Fernando Alonso of Spain (C), Kazuki Nakajima of Japan (L) and Sebastien Buemi of Switzerland celebrate with champagn on the podium after winning the 24h Le Mans race with a Toyota Gazoo Racing in a Toyota TS050 Hybrid, France, 17 June 2018. EPA-EFE/EDDY LEMAISTRE

Ernest Hemingway, inevitably, put it best. “There are only three sports: bullfighting, motor racing and mountaineering; all the rest are merely games.” This year, it was Toyota's time to win.

Dave Brabham is the youngest son of the three-time World Formula One champion, Jack, the tough-as-nails Aussie and the first and, so far, only driver to have won the championship in a car bearing his own name.

David, now 52, says that the most difficult thing about the Le Mans 24-hour race “Is when you are driving at night and it’s raining. You can’t tell if the black patches on the road are dark tar or puddles of water.”

He tells of being sideways in third gear in 2007, the year of his first class victory for Aston Martin, in streaming rain down the six kilometre Mulsanne straight.

“I just concentrated on my hands, they felt like old hands on the steering wheel, rather than trying to deal with everything around me, and that kept me focused.”

Now broken by two chicanes, cars still hit 330km/h on the straight, of what is still a public road when the race is not on. As South African motorsport legend Sarel van der Merwe, who competed in the event eight times with a best place finish of third on debut in 1984, wryly observes:

‘I don’t know why they bothered with those chicanes on the Mulsanne. You are just as dead at 330 as you would be at 400 km/h.”

This was the speed the faster runners used to top.

In 1986, Sarel’s team-mate F1 driver Jo Gartner was killed on the straight when the suspension in his Porsche broke, pitching the car over the guardrail. Van had only handed over to him the lap before.

The spectator numbers at the 24 Heures du Mans were 260,000 this year, making it the largest annual spectator sporting event. Most are petrol heads, of course, but cars are far from the only reason why people make what is for many an annual pilgrimage to what is the world’s oldest active sports-car race, the first being held in 1923.

The inside of the track is a mass of tents, motorhomes and braais, with the odd beer being drunk. It’s less the noise than the nostalgia that draws in many. I had to confess to visiting to a rheumy-eyed return visit to the ‘Alain Prost’ kart track, also in the infield, on the 40th anniversary of the World Karting Championship held there, which pitted our humble SA squad against the likes of Ayrton Senna.

David and Goliath struggles still persist, in relative terms, even at this top level. At this year’s 24-hour a small English manufacturer, Ginetta, made its debut, taking on the likes of Toyota, the world’s largest car producer, in the top LMP1 class with a brand new car developed in their Leeds factory.

The Toyotas make nearly 1,000 horsepower from a 2.4-litre twin turbo V6 paired with a nine megajoule hybrid system involving a motor-generator at each axle. The turbo V6 in the Ginetta makes 650 horsepower, maybe. Even so, it’s hardly a cheap exercise. With 40 engineers, mechanics and support personnel on hand over the weekend, each Ginetta involved an outlay of $1.7- million less the gearbox and the engine, the latter adding a further $600,000 annual lease charge.

And that’s without the onerous cost of superstar drivers. Mike Simpson, 34, is a local Yorkshire lad who races cars as a job for Ginetta.

“We know we are lacking grunt compared to the rest of the LMP1 field,” he said at the start of the race, “but we have good high-speed balance and aero. We just have to stay out of the pits.”

Simpson has been with Ginetta for 10 years, the longest serving employee since it was taken over by entrepreneur and racing driver Lawrence Tomlinson. With no silver spoon available in an era where parents invest hundreds of thousands of pounds in their children’s karting careers alone to get them to the next level, the sport is a long way from the adventure of the kart on the roof of the Hillman Avenger station-wagon in the manner of the World Championship circa 1978.

But it’s not easy for everyone. Simpson worked his way up the motor racing ladder the tough way, this, his first 24-Hour, a realisation of a lifetime dream.

Simpson was in good rookie company along with F1 drivers Fernando Alonso, Jenson Button and Juan-Pablo Montoya, the latter a winner of the Indy 500 as is Brazil’s Tony Kanaan, who was also running his first Le Mans.

Jan Lammers is at the other end of the experience spectrum. A contemporary of Van der Merwe, the Dutchman won the race for Jaguar in 1988. He was back this year for a remarkable 24th 24-hour, driving in the all yellow colours of Racing Team Nederland. Having raced for a variety of factory teams including Toyota and Nissan, he is still impressively quick, competitive and consistent at 62.

Jody Scheckter, South Africa’s only F1 World Champion in 1979, retired the following season since “once you are on top, the only place is down”.

“Also,” he adds, “in that era, it was a game of Russian roulette. The more Grands Prix you did, the greater the chance you would have a serious, perhaps fatal accident.”

Racing cars then were notoriously dangerous, the circuits also lacking in today’s safety facilities. Drivers today have longer careers, should they choose to.

Despite the use of public roads as part of the track, Le Mans has, too, moved on. Even as late as the 1980s given the Spartan on-track facilities, teams used to be housed in rented garages in the local towns. Now it’s a spick-and-span operation, with long rows of transporters, motorhomes, and hospitality units hinting at the logistics involved, the track being run by a small army of 4,000 officials. It’s all a long way from the brooding pit-side scenes of Steve McQueen in the mega-budget monosyllabic movie Le Mans.

This does of course not mean it’s got any easier, since technology has changed for everyone.

“The most difficult thing about Le Mans,” says Lammers, “remains to establish a rhythm, to know when to sit back and when to push.”

This is all important in a field which matches professionals with gifted amateurs in cars with as much as a 40km/h lap speed differential between the 60 entrants. And fitness is at a premium, with two-hour stints expected in the cars in the day, three at night.

Despite the nostalgia, it’s a particularly cruel sport, with no sympathy for sentimentality, continuously testing the resolve of the toughest nut. Simpson’s debut was blighted, almost immediately, with a flat tyre, the result of hitting a bollard. They worked their way back into the top six in the top LMP1 class, only to be set back by all manner of maladies, finishing eventually 42nd out of the 43 classified finishers. It was too much to expect, at this level, a fairy-tale debut for the Ginetta. They were not able, sadly, as Simpson had hoped, to stay out of the pits.

Lammers finished a competitive 9th out of 20 LMP2 cars, and 13th overall. Button’s debut was marred by an accident, which put him back in the field, only to drop out in the last hour. Montoya placed ninth overall, while his team-mate the former Force India F1 driver Paul de Resta clouted the wall with less than five hours to go.

But showing that there is, after all, room for sentimentality, Alonso came through, as if scripted, to win on debut, putting him in pole position in his ambition to become only the second person after Graham Hill to win motor racing’s Triple Crown: the Monaco GP, the Indy 500, and Le Mans. Only the Indy box now remains to be ticked; and a helluva tick that is too.

David Brabham has rekindled the eponymous family name in a range of new cars. Le Mans is on his bucket list. Will he personally add to his 18 attempts, and three class and one overall victories, perhaps tempted by appearing in the green and gold national colours his father made famous in motorsport? Avoiding the question, “I never really retired,” he responds. “I have tested the new car, the Brabham BT62, and found I was still quick, I still had it.”

Of course he did. Never giving up is the mindset of real racers. As Hemingway observed, “No horse named Morbid ever won a race.” DM

Dr Mills drove his hire-car down the Mulsanne, missing the chicanes altogether.