Were the media co-conspirators in Kimmy and Donny’s Singapore Fling? 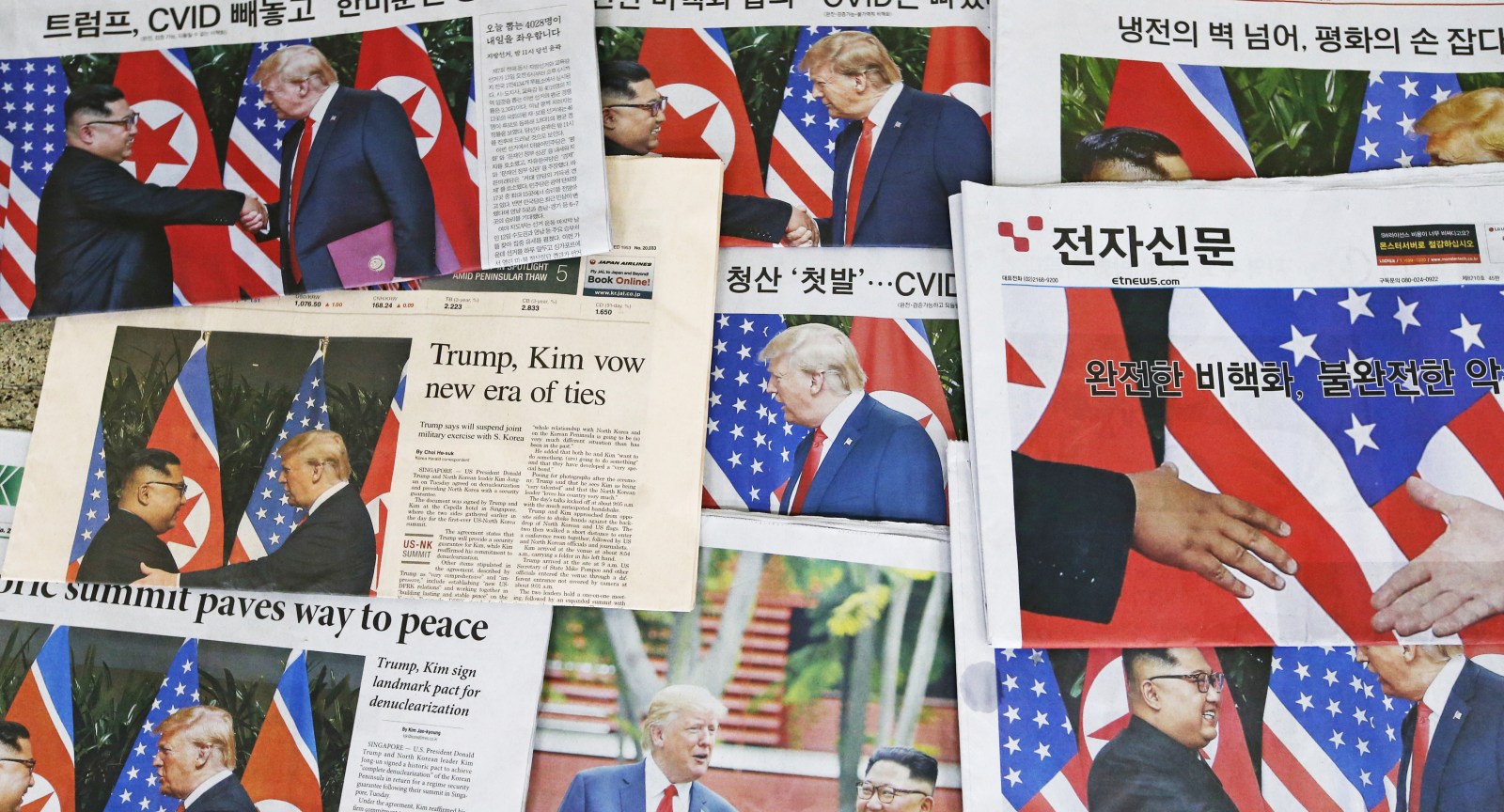 Now that the Trump-Kim summit is over, did the Singapore meeting achieve anything, or was it just a made-for-television extravaganza with the world’s media as willing co-conspirators?

Donald Trump has created an entirely new style of diplomacy. Instead of a long-followed school of diplomacy that seeks to build alliances in order to achieve more than what a single nation – even a very powerful one like the United States – can do on their own, Trump has decided excoriating nations and leaders with which his country has something in common – and embracing international troublemakers is the wave of the future. Even more, for unfathomable reasons, he is increasingly casting his lot with those nations that despise and denigrate democratic practice and whose rulers believe such foolish ideas are the equivalent of sad, useless weakness.

This brand of madness on the part of the American president has been on full display, visible on every television screen, in print, and via every form of electronic medium. Worldwide. Unceasingly.

And this has all been in aid of a mad scramble to obtain a meeting – at virtually any cost – with that plump, hereditary dictator with the bizarre tonsure of a small, impoverished nation whose severely put-upon inhabitants have been starved for decades in order to generate sufficient resources to build a clutch of ballistic missiles and (presumably) the nuclear weapons that will sit atop them.

For a year and a half, then, Trump and the other country’s ruler, Kim Jong-un had carried out an acrimonious verbal war of insults, threats, and taunts, including creative searches for new synonyms for “mad man”, as the rest of us were left to wonder if the two of them would ultimately move onto a real war.

But then, mirabile dictu, the two men, heretofore threatening to blow each other’s respective nation to kingdom come, met – all smiles and bonhomie – in Singapore and talked and nibbled a tasty lunch together. And like magic, in an instant, the entirety of it all was sweetness, love, and light.

It became something like the end of that film, Who Framed Roger Rabbit, where the characters – both animated and real ones – went from the starkness of black and white into a sudden burst of technicolor, twittering birds, butterflies and cheery music. Or like someone who has had a near-instantaneous, but mysterious religious conversion from cynical agnosticism to full-blown born again religious fervour, following the discovery of an extraordinary vision of a saint in the texture of the surface of a piece of breakfast toast.

The thing is, however, that with his heavy-breathing, increasingly desperate desire to gain a meeting with Kim as the objective, rather than the end point punctuation of a careful process that finally culminates in such a meeting after thorough, meticulous negotiations, Trump let himself be hypnotised by the tantalising possibility of a global made-for-television photo op, grinning from ear-to-ear like a small child pretending to be an adult in shoes, tie and jacket too big for him.

In that ludicrous joint statement that had none, zero, not-a-single one of the basic principles of the Trump administration’s so-called uncompromising approach towards negotiations with North Korea – the mantra of comprehensive, verifiable, irreversible denuclearisation – it became starkly clear Kim and his team had done their homework and stayed on course right to the end, even as Trump relied on his ballyhooed self-promotion as the world’s best negotiator to allow himself to be led around by the muzzle by his younger, ostensibly less-experienced counterpart.

In fact, pre-Trump, there have been numerous prior agreements with North Korean authoritarian rulers over the past several decades. In the end, despite significant safeguards and concrete, cautionary checks, the North Koreans have abrogated all of them.

The master negotiator, by contrast, had obtained an agreement that commits North Korea to being dedicated to working towards the denuclearisation of the Korean Peninsula – something that means something very different than North Korea’s surrender of its nukes and delivery systems – and in favour of peace and love. In fact, that “denuclearisation” phrase from the perspective of North Korea has traditionally meant the US would draw down on its defensive arrangements and deterrence umbrella over South Korea, including forces based in Japan.

Nevertheless, if one listened to him, Trump says he had found Kim to be a warm, bright, funny, savvy, skilled political operator who has won the love of his people and has their protection uppermost in his mind. By the time Trump was on the way home, he was already telling people that Americans should now feel much safer than before his diplomatic triumph. (Neville Chamberlain memories anyone?)

Instead, Americans should actually feel even more trepidation than previously that their national leader is a gullible old fool with the instincts, but not the skills, of a garden variety con artist. Sort of like a card shark whose hands keep dropping the hidden card. If anything, this agreement now leaves open the disturbing possibility the whole crisis and the language that went with it was artificially ratcheted up and down to deflect attention from the president’s various domestic political difficulties.

And, by the time it all wraps up in the not so very distant future, the US will be forced to acquiesce in yet another nation – this time North Korea – that controls a modest nuclear deterrent capability, even as the tight sanctions regimen that was gradually put into place against it is gradually rolled back as a function of all this happiness.

But the collateral damage to America’s allies is going to be harder to fix. With Trump’s sudden, flippant cancellation of joint military exercises with South Korea (a gift to both North Korea AND China) without bothering even to consult with America’s own military, let alone South Korea, that longstanding bilateral tie is now distinctly wobbly.

The Japanese are similarly going to be discomfited about all of this, given that Trump seems barely to have mentioned North Korea’s dreadful human rights record, let alone that fixture of Japanese diplomacy – the longstanding cases of the abductions of Japanese nationals by North Korean operatives.

Besides the newfound love and admiration directed from Trump towards Kim and the international respect for North Korea this has engendered, the clearest winner in this summit appears to have been China. From their perspective, North Korea’s relationship with the US now seems more stabilised; North Korea’s regime is less threatened generally by the west; and a persistent thorn in the side of China, those 28,000+plus US forces in South Korea and their continuing military readiness and co-ordinated training with South Korean forces to ward off attacks and serve as a watchful eye towards China have now been leashed and locked down in public promises from the US president.

Now, just think, if Barack Obama had made those statements, there would already be some hectic congressional investigations in progress, and dark mutterings about impeachment being uttered.

Now, compare all of this with the way Trump carried out a campaign of verbal abuse, misstatements (aka lies and falsehoods), and threats directed towards America’s next door neighbour, Canada, and its prime minister. Along the way, Trump henchmen/hatchetmen offered yet more barracking of Justin Trudeau, with the kind of language rarely used against the leader of any nation – hostile or ally.

While some of the worst of it has now been walked back a bit, the bad taste will remain north of the border. And the head shaking and muttering about untrustworthiness will continue. That and the lies told about the two countries’ trade relationship as well, just to score some cheap points. And we shall not even bother going into the boorishness of his joining the G7 leaders meeting late, leaving early before major topics were discussed, and his churlishly refusing to participate in the traditional joint statement by allies at the end of such summits. That behaviour stands in stark contrast to the love sent Kim Jong-un’s way.

Despite some new polling that indicates some 43% of Americans feel the Singapore summit has made the US more secure, that finding will be tested and will need to be re-examined closely – if it becomes clear that flimsy piece of paper signed by the two men in Singapore leads nowhere in particular, and achieves little if anything tangible – before that pesky November midterm election in America. DM