From R9.3m to R3.7m: The story of the Parliament Top Four’s new wheel$ 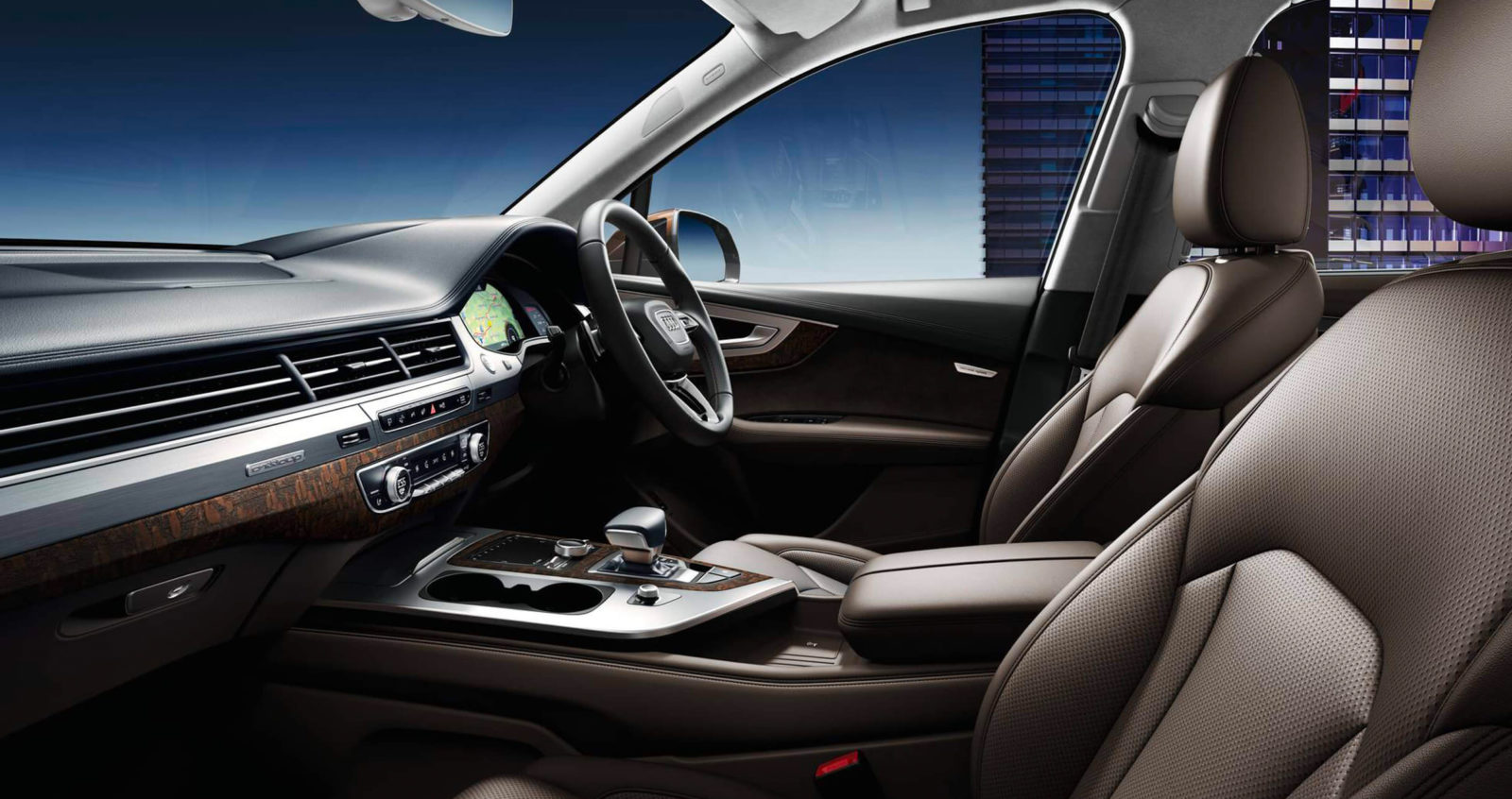 The Ministerial Handbook could do with some revision when it comes to the largesse it bestows on our driven officials and their deputies. In case of the Parliament’s top four officers's new cars, at least some of the breaks designed to limit wasteful spending actually worked.

Parliament spent R3,669,411.95 on four Audi Q-series cars for its presiding officers and deputies that all feature panoramic glass roofs alongside individualised extras. Concluded with the hand-over of the cars in Cape Town on 31 May 2018 “with owner’s manual, First Aid kit, spare keys & without any defects”, according to documents Daily Maverick has seen, this vehicle procurement comes amid Parliament’s pleas for more funding for what’s called the “core business” of the people’s Parliament – oversight, legislation and committee work.

It could have been worse – the official vehicle procurement saga could have cost taxpayers R9,337,616.56. That it didn’t is the sliver of a silver lining in a four-month procurement process that saw the initial R6.04-million price tag of late January 2018 balloon to just over R9.33-million in February, according to documents seen by Daily Maverick. It was settled back at R3.66-million in May 2018, after concerns raised from within the parliamentary administration led to the original official car procurement order of eight slashed down to four.

Effectively, those queries from the inside put a spoke in the wheel of the initial intention elsewhere in the administration. It’s complicated and, as with most things related to state administration, involves rules, guidelines, definitions and legal opinions.

At the centre of this is the 2007 Ministerial Handbook for Members of the Executive and Presiding Officers, and how to interpret the official two official car provision – one in Cape Town, one in Pretoria. Parliament’s presiding officers are included in the handbook’s definition of “national members” – all eligible for two cars – but unlike ministers or deputy ministers, the presiding officers do not have a permanent official office in Pretoria, the administrative capital.

And because of that, unlike in 2011, Parliament officially decided to just get four official cars for use in Cape Town, the seat of the national legislature.

“Based on 1) the legal opinion provided by the Acting Chief State Law Adviser; and 2) the fact that the presiding officers and deputy presiding officers do not have official offices in Pretoria, it is recommended that Acting Secretary to Parliament (Baby Tyawa) approve the procurement of 1 (one) official vehicle for each of the presiding officers,” read the official memo from Parliament’s Institutional Support Services divisional manager Mabatho Zungu, dated 22 March 2018, seen by Daily Maverick.

That legal opinion from the Office of the Chief Law Advisor had emphasised the “may” in the 2007 cabinet-approved handbook that was a “guideline” – this raises separate questions as the executive and departments over the years have justified official luxury car purchases as an entitlement in terms of the handbook – and the need to satisfy “the principles of sound, effective and efficient financial management” alongside transparency under the 2009 Financial Management of Parliament Act.

Parliamentary spokesperson Moloto Mothapo on Wednesday, 13 June said Parliament had not bought new official cars for the past seven years.

“The presiding officers of Parliament are unwavering in their commitment to Parliament’s adherence to prudent management of public funds, particularly in the context of the decreasing annual budget allocations to Parliament and the prevailing tough economic climate in the country.”

However, the current official cars had “become old, unreliable and risky to the safety of the passengers. The aged vehicles have also become a serious financial burden to the institution as they are now too costly to maintain, thereby making their continued usage economically unjustifiable.”

Mothapo added that the vehicle procurement was in accordance with the 2007 Ministerial Handbook.

“Consistent with Parliament’s commitment to prudent financial management and cost-cutting measures, their cost is less than the prescribed rate in the handbook – resulting in a significant saving of several millions.”

That official vehicle procurement was signed off on 8 May 2018 by Parliament’s administration, the same day the car company supplied the quotes for the four luxury cars, according to documents seen by Daily Maverick.

These cars replace the seven official cars bought in July 2011 – four Mercedes Benz S-class vehicles for use in Cape Town, and for use in “their home base” the Audi Q7s for the National Council of Provinces chairperson and deputy and a Mercedes Benz E500 by the then speaker.

While Parliament’s official car procurement in 2018 has taken a different turn – with eligibility limited to Cape Town, the seat of Parliament, no longer extending to “home base” or “constituency” – it nevertheless raises questions.

The official vehicle procurement unfolded amid a general cost-cutting drive by the state – and to Parliament’s dissatisfaction it was not adequately funded. Mbete during her opening address to Parliament’s budget vote debate on 22 May 2018 again highlighted financial pressures:

“… (A)s we have highlighted during this term, Parliament has continuously faced significant budget shortfalls, which have direct implications for the performance of our constitutional obligations”.

It also has emerged that the joint standing committee on the financial management of Parliament was left in the dark about the official vehicle procurement, according to two insiders. An argument could be made that there was no requirement to bring this to the attention of the oversight committee as it was dealing with the 2017/18 financial year, and the purchases were made only in the 2018/19 financial year. However, documents seen by Daily Maverick show that the procurement process that started in late January had right from the start identified the cost centre and line item to fund the official cars.

“No comment. Let me look at it and take it from there.”

DA chief whip John Steenhuisen, who serves on that committee, said the vehicle acquisition was “shocking” given the current circumstance and Parliament’s “repetitive bleating” about lack of funding.

“This dents any argument for greater funding.”

The procurement coincided with the drawn-out salary and performance negotiations between National Health, Education and Allied Workers’ Union (Nehawu) and Parliament. It is understood a proposal is now on the table, but has not yet been finalised.

“We don’t have issues (with cars) at a reasonable price. But the management of Parliament must also address the issues of the workers.”

This is how it unfolded:

It was approved by the executive directors in the offices of the Speaker and NCOP chairpersons on 7 February, by Parliament chief financial officer Manenzhe Manenzhe two days later and by acting secretary to Parliament Baby Tyawa on 13 February, according to documents seen by Daily Maverick.

It was all set to go. Earlier in February the National Treasury also had given permission to use its RT57 transversal contract. That’s jargon for the centrally negotiated deal for services like cars required by more than one institution, and it is generally understood the companies authorised under such transversal contract provide discounts for such access. The National Treasury indicated the cars must be registered in the name of Parliament.

But on 26 February, 2018, Zungu wrote another official memo. There were issues: the initial quoted costs did not include service plans or handling and delivery fees. The plan still was to purchase eight cars – now at a total cost of R9,337,616.56 for different models. These were listed in documents seen by Daily Maverick as four Audi Q 7 TDI Quattros in orca black for the two presiding officers and four Audi Q5 2.0s in Manhattan metallic grey for their two deputies.

It’s unclear from the documents exactly how the additional more than R3-million was arrived at. According to the official quotes, the handling fee per car was R2,596, totalling R10,384, and maintenance plan of R58,160 for the Q7s and R45,896 for the others, totalling R208,112.

However, that second proposal again was signed off by the executive directors in the offices of the Speaker and National Council of Provinces chairperson. It was not signed off by Parliament’s chief financial officer or others.

At that point concerns were raised from within the administration, leading to an in-house inquiry and a legal opinion from the Office of the Chief Law Adviser, particularly over the Ministerial Handbook.

Co-incidentally, those guidelines have been under revision for the past decade, although Public Service and Administration Minister Ayanda Dlodlo promised completion shortly. There are some issues, including vagueness as to whether the 70% threshold for official car acquisition at the total annual salary package of a minister or deputy minister applies to just one car or both cars together.

Based on that 70% threshold, according to Parliament’s procurement proposals, Mbete and Modise were entitled to official cars each valued at R1,977,829 and their deputies Tsenoli and Tau qualified for a maximum value of R1,384,456.

The 2018 official cars that cost just over R3.66-million are individualised with extras although it’s not clear who drives what aside from the Q7 for presiding officers, and Q5s for their deputies.

These official cars were procured in the last months ahead of the 2019 elections that marks the end of term of the current Parliament. The cars remain the property of Parliament, not of individuals, and officialdom’s argument may well focus on this, while invoking the provisions for official transportation in the Ministerial Handbook.

But in these times of cost-cutting across the state to balance books, citizens under increasing pressure after April 2018’s VAT hike to 15% and the rising cost of petrol, food and just about anything else, perhaps it’s time another Ministerial Handbook provision should get attention. That provision allows public office-bearers to use their own private vehicles, and claim back mileage. DM