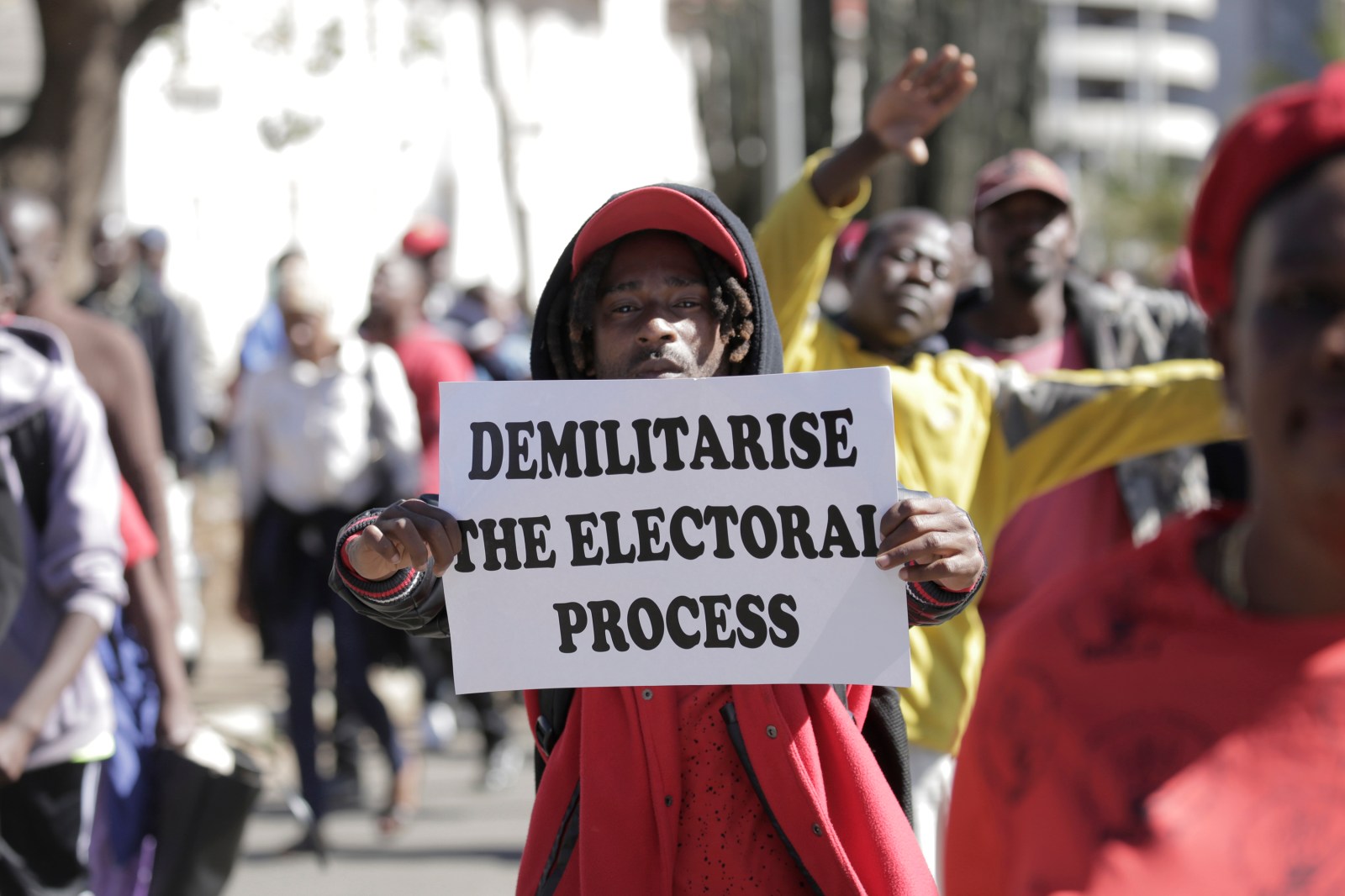 Movement for Democratic Change (MDC) supporters march through the streets on their way to the Zimbabwe Electoral offices during a pro-election reform demonstration in Harare, Zimbabwe, 06 June 2018. T EPA-EFE/AARON UFUMELI

The polls won’t determine President Emmerson Mnangagwa’s survival – the economy is what counts. By Derek Matyszak

Opaque governance and the secrecy of Zimbabwe’s main political parties have always made it tough to work out what is happening in the country. The difficulty was compounded after the militaryinterventionin November 2017 that resulted in the ousting of Robert Mugabe as president.

Ahead of elections scheduled for 30 July, a strident propaganda war between the victors and the vanquished has emerged. One side is promoting the idea that the new administration is legitimate, stable and reformist; the other that it is a military junta, unstable and inherently oppressive.

Emmerson Mnangagwa, who became interregnum president by virtue of the military intervention, inherited an economy in a desperate state. It was obvious that his political fortunes depended on preventing an economic meltdown. The means identified to do this is massive foreign direct investment.

At every opportunity, Mnangagwa recites his “Zimbabwe is open for business” mantra. He has reversed the “indigenisation” policy of his predecessor that negated any possibility of significant inflows of foreign direct investment.

The state (Zanu-PF-controlled) media is awash with stories of investment coming into the country. They say foreign businesses, supposedly chary of missing the boat by waiting for the 30 July elections, are rushing to invest in the country’s “abundant mineral resources” and to take advantage of other opportunities ahead of their rivals.

Government claims that $16-billion in foreign investment has been secured under Mnangagwa’s brief incumbency and that the country is on course to become a middle-income country by 2030. In order to attract this investment, the Mnangagwa government must be seen as legitimate and stable. The propaganda of the vanquished is intended to undermine this perception.

In terms of the counter-narrative, Zanu-PF is in disarray, with party structures decimated by the successive purges that culminated in the purge of Mugabe himself. Mugabe, it is claimed, still enjoys massive support in all three Mashonaland provinces, which constitute Zanu-PF’s traditional stronghold.

This support is held to be particularly resilient among the youth. Young people are supposedly angry at the manner in which Mugabe was deposed and disappointed as the intended beneficiaries and prime target of Mugabe’s indigenisation policies.

The New Patriotic Front (NPF) party, led by Ambrose Mutinhiri and formed by the vanquished – which apparently has Mugabe’s backing – claims it will reap the benefit of the votes of the youthful disaffected. It is pointed out that 60% of those on Zimbabwe’s newly constructed voters roll now comprise people under 40. The NPF argues that Mnangagwa, who struggled to win constituency elections under Mugabe, cannot win under these circumstances.

The Mnangagwa government is also unstable, according to this account, due to a deep rift that has developed between Mnangagwa and Vice-President Constantino Chiwenga, the former commander of the Zimbabwe Defence Forces who led the military intervention in November.

Rumours were generated that Mnangagwa has thwarted Chiwenga’s own political ambitions and agenda and that Chiwenga intended to engineer Mnangagwa’s removal before the elections and stand as the party candidate himself – or to cancel the polls.

A further battle is supposed to be ongoing between the police and Central Intelligence Organisation – believed to be aligned to Mugabe before the military intervention of November – and the military, which supported Mnangagwa.

Both these narratives have one thing in common – the press articles that promote them are singularly short on evidence. Journalistic ethics have been abandoned in favour of eye-catching headlines that promote the instability narrative and sell copy, but are devoid of hard facts. Similarly, details of investment deals prompted by the purveyors of the stability narrative are hard to come by.

These narratives are, of course, spilling over into party rhetoric around the elections. The NPF claims that Mnangagwa cannot win a free and fair poll because of the antipathy towards him by the former Zanu-PF faithful. The Movement for Democratic Change (MDC) Alliance says it has the vote of the youth in the bag by advancingNelson Chamisa, 40, as their presidential candidate.

At the end of the day, however, the outcome of the election will be determined, as it always has been, by Zanu-PF’s manipulation of the vote in rural constituencies where figures from the new roll suggest that over 70% of the electorate (including 60% of the youth) reside. Aware of this, the opposition and instability narrators claim that Zanu-PF has lost its control over rural constituents.

Zanu-PF controlled the rural areas through the police and Central Intelligence Organisation, it is said, and these structures in the rural areas have now been neutralised by the military. As a result, opposition election campaigns can now penetrate Zanu-PF’s rural strongholds in an unprecedented manner and villagers feel free to vote as they wish.

The notion that Zanu-PF has lost control of rural voters is, however, wishful thinking and demonstrably false. Complaints by NGOs and opposition parties regarding Zanu-PF officials’ extensive interference in the construction of the new voters roll in rural areas is evidence of the party’s continued control.

Zanu-PF controls rural areas primarily through the institutions of local governance (which determine rural life in a multitude of ways, including the distribution of food aid) and monopoly over the only media to which rural dwellers have access – the electronic media. Zimbabwe has only one state-controlled TV station, and the few private radio stations are controlled by Zanu-PF proxies.

The Mnangagwa administration and pending elections present an opportunity for the ‘normalisation’ of Zimbabwean politics and for the international community to draw a line under the long-running Zimbabwe crisis. It is not an opportunity they intend to squander.

The international community is determined to endorse any half-way decent election devoid of endemic bloodshed. Any poll not characterised by electoral fraud so blatant that one’s eyes cannot be averted will be regarded as passing muster by most international observers.

The MDC Alliance will win enough seats in parliament to keep the new Mnangagwa government on its toes, if not entirely honest. Mnangagwa’s survival is not dependent on the elections.

The real question is whether the economic hole dug by Mugabe is so deep as to be insurmountable. Economic collapse would presage a return to the laager mentality of Mugabe and all the political repression that would entail. DM