Tough questions after listeriosis – are SA health control measures up to standard? 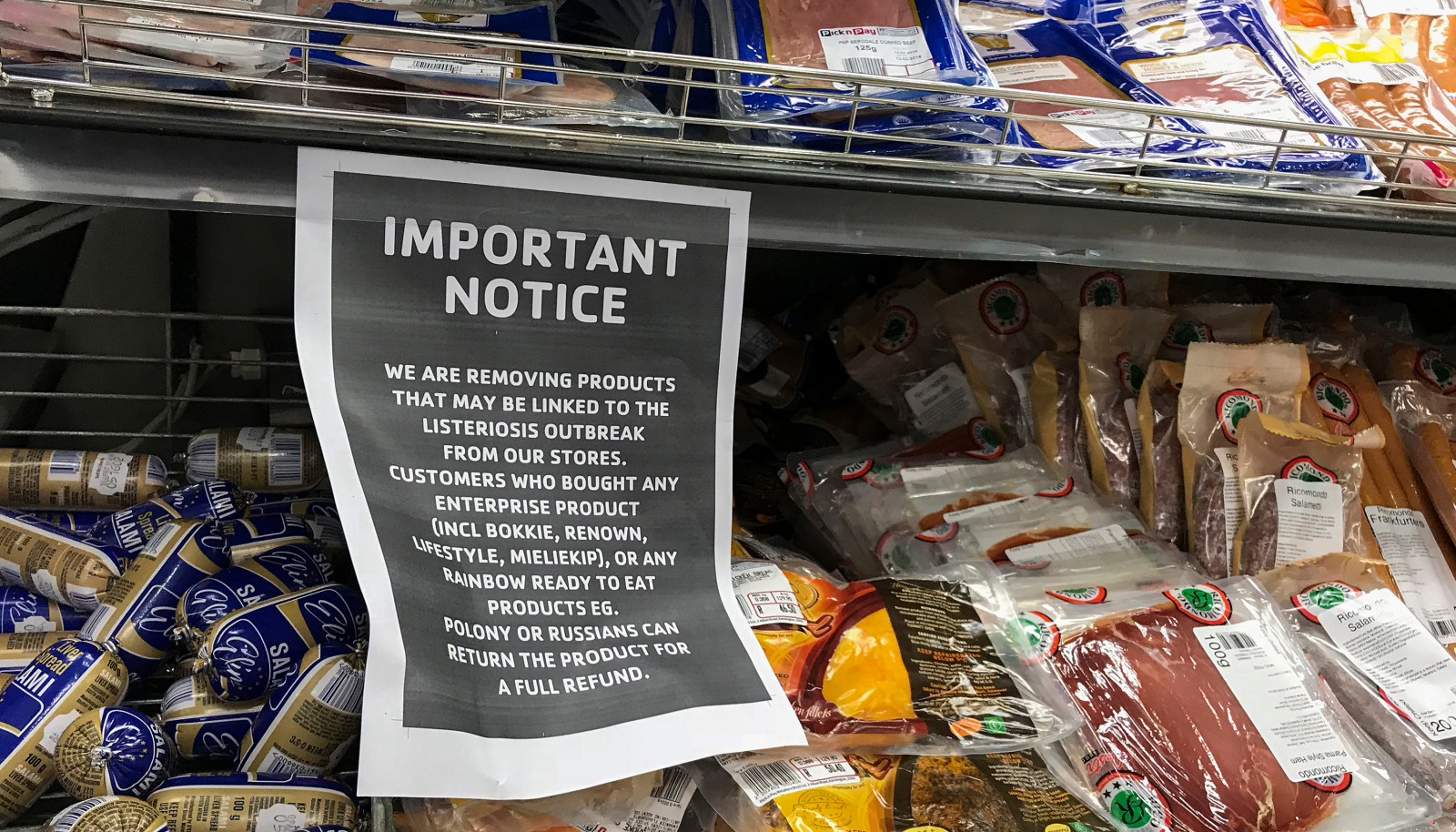 A sign to inform customers is placed over the processed cold meats section of a supermarket in Cape Town, South Africa, 05 March 2018. EPA-EFE/NIC BOTHMA

South African authorities have taken commendable steps to control the listeria outbreak and to step up local inspections. What is lacking are stringent measures to ensure that no contaminated meat is imported.

In a recent media statement the government enumerated a long list of actions that have been taken to manage the listeriosis outbreak, which, according to the World Health Organisation, is the biggest outbreak seen anywhere in the world. In every crisis situation it is important that lessons are learnt; when it is a matter of life or death it is critical.

It is commendable that the government has taken steps such as strengthening the National Health Laboratory Service’s food testing capacity; and making a concerted effort to keep the public, especially the vulnerable groups, informed with accurate health information about the disease and its prevention.

According to the statement several steps have been taken to prevent the export of any contaminated meats to South Africa’s trading partners abroad, including the rescinding by the Department of Agriculture, Forestry and Fisheries of the export certification of any products implicated in the outbreak.

However, the statement fails to address one critical issue question – is the inspection regime for meat imports entering South African ports, much of it from countries with questionable health standards, equally stringent and thorough, to protect our own citizens with equal vigour?

Now more than ever before, South African consumers must be concerned about the countries from which it imports meat, and we need to know how effective our health control measures and inspection procedures are.

The vulnerability is best illustrated by Brazil. Last month the EU suspended meat imports, mainly poultry, from 20 Brazilian establishments due to what the EU called “deficiencies detected in the Brazilian control systems”. In the interests of public health, South Africa should be doing the same.

There are only a few local facilities that produce the mechanically deboned meat (MDM) used to make processed meats including polony. Many brands of processed meat produced here contain “white slime” as MDM is sometimes called, which is imported in massive quantities from Brazil.

To say that there are problems with Brazil’s meat-inspection regime is an understatement. At various times during the past year dozens of countries banned meat imports from Brazil because of food-safety concerns.

Brazil’s meat-inspection scandal made global headlines when it was revealed that major meat producers and exporters were bribing inspectors. The fact that the chief executive of one of Brazil’s largest meat producers was arrested and might face jail time, speaks volumes and should be cause for concern.

It was a full year after the listeriosis outbreak that South Africa finally imposed extra listeria test requirements on imported meat products, but these intensified inspections by the Department of Health were only conducted for a brief period, until the department named a polony factory in Polokwane as the source of the outbreak. Inspection of incoming meat now reverts to the Department of Agriculture, Forestry and Fisheries, whose routine function this is.

Secondly, and more importantly, inspections of Brazilian imports in particular are essential because of the lax health regime in that country.

These concerns are real, because South African lives are at stake.

Brazil has no requirement in its health and food safety regimes to report listeria. Listeriosis is not a notifiable disease there as it is in most developed countries, but Brazil has a long and well-documented history of unacceptable levels of listeria being present in its processed meat, including meat for export.

To address this issue, researchers from Brazil’s internationally renowned Oswoldo Cruz Foundation and the Federal University of Rio de Janeiro collected food samples from 1990 to 2012 from 12 Brazilian states and examined them for bacteria. From these food samples nearly 6 000 had listeria present.

The study notes that the meat producers who sent these samples “didn’t inform if they had established a standard microbiological acceptability of the product or the presence or number of bacterial masses per unit area or batch. There was no information about where the products came from…or if they would be exported.”

In other words, South Africa imports the bulk of its MDM for processed meats from a country whose meat-inspection system is suspect and where there is no requirement to report listeria.

Brazil is now the major supplier of imported chicken to South Africa. If consumers are to be protected, we must have adequate screening of Brazilian chicken imports, including the 200 000 tons of MDM imported every year, most of it from Brazil.

This is a food safety risk that cannot be ignored. To date more than 200 South Africans have paid with their lives for the listeria scandal. And while the current outbreak of listeriosis has slowed down, this issue has to be addressed to prevent any recurrence.

South African authorities have taken commendable steps to control the listeria outbreak and to step up local inspections. What is lacking are stringent measures to ensure that no contaminated meat is imported.

The Brazilian producers must be inspected for health and safety compliance before being allowed to export meat products including chicken to South Africa. It is imperative that every consignment imported into this country must be inspected by health authorities, and the costs carried by the importers, not the taxpayer.

What this also highlights is the opportunity to establish more meat-deboning facilities on home turf so that South Africa increases chicken production and creates jobs as well as protecting its food security and the lives of consumers.

Francois Baird is the founder of FairPlay.