Forget the Libya Model, South Africa shows the path to peace with Pyongyang 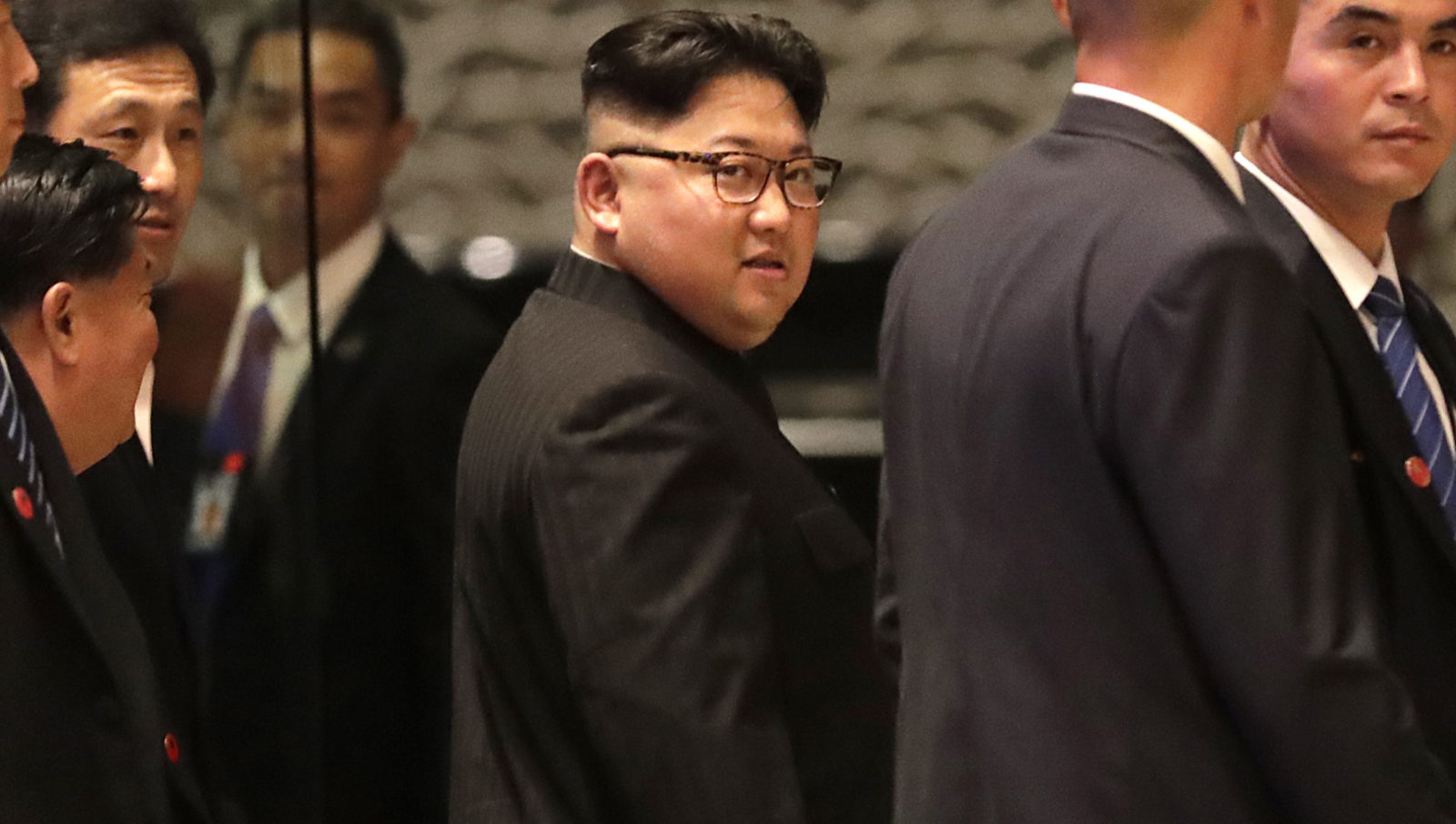 North Korean leader Kim Jong-un walks out from the Marina Bay Sands during a city tour in Singapore, 11 June 2018. Others are not identified. EPA-EFE/MAST IRHAM

Now that US President Donald Trump and North Korean leader Kim Jong-un have finally met, the real work of denuclearising the Korean peninsula begins. Or not. There are still questions aplenty. Only time will tell whether the Singapore Summit sealed the fate of North Korea’s nuclear weapons programme or was another false dawn. Writing in Foreign Policy in May 2018, Terence McNamee revisited South Africa’s transition from nuclear-armed pariah to respected member of the world’s non-nuclear club and especially the role of FW de Klerk, suggesting that Kim too could – for different reasons – decide that his bombs are more valuable dismantled than deployed.

This article was originally published in Foreign Policy on May 22, 2018

If North Korean leader Kim Jong-un decides to dismantle his country’s nuclear arsenal, history will record him as only the second leader of an isolated rogue state to do so. The first was South Africa’s last apartheid president, FW de Klerk.

Few analysts are holding their breath. Most put the odds of Pyongyang fully denuclearising at close to zero. Its latest threat to cancel the planned summit with Trump seems to affirm the consensus. The record of North Korea’s supreme leader is full of red flags.

So too was De Klerk’s. No one expected the archconservative Afrikaner to lead his nuclear-armed regime from pariah status to international acceptance. His own brother wrote that De Klerk was “too strongly convinced that racial grouping is the only truth, way and life” to initiate any meaningful change.

The story of how De Klerk ditched the apartheid regime’s nuclear weapons has been strangely absent in the current frenzy of speculation on North Korea’s nuclear intentions. For all the talk of the “Libya model”, it is worth recalling that Tripoli was five to 10 years away from building its first bomb when Muammar Gaddafi abandoned its programme. Getting rid of fully built and functional nuclear weapons, as De Klerk did, is another thing entirely. North Korea is currently estimated to have 60 working weapons.

South Africa’s arsenal was dismantled rapidly, secretly, and unilaterally. Although even in the best-case scenario things would not unfold that way in Pyongyang, other parallels are relevant.

The current diplomatic opening presents Kim with a similar choice: He could steer North Korea away from its wretched past towards a freer future or revert to repression as usual. As in South Africa in the late 1980s, in North Korea today the fate of a nuclear weapons programme built for one purpose – ensuring regime survival – hangs in the balance.

De Klerk rightly saw South Africa’s secret but widely rumoured nuclear arsenal as an obstacle to political reform and gaining international trust. Israel, the United States, and few other Western governments were aware of its existence, but their intelligence on the programme was quite limited. The regime had built six air-deliverable nuclear weapons by the end of the 1980s, a seventh was under construction, and a new generation of nuclear warheads fitted to missiles was planned.

De Klerk’s order to kill the programme stunned defence officials. No one had ever discussed or considered dismantlement. The risks involved were monumental. Symbolically, if not practically, nuclear weapons were viewed as the ultimate guarantor of white dominance in South Africa. De Klerk’s predecessor, PW Botha, railed against him for ending the programme. Botha claimed (probably correctly) that by destroying the arsenal, De Klerk destroyed the Afrikaner state. A violent backlash, some say a military coup, was narrowly avoided.

De Klerk also faced intense international pressure. Reports at the time suggested that the United States and Israel feared that if Nelson Mandela’s African National Congress (ANC) government inherited a nuclear weapons capability, they might sell off the technology to anti-Western regimes in Libya, Cuba, or Iran as payment of old debts.

Of more immediate concern to De Klerk was the threat posed by disgruntled whites who worked on the nuclear programme, who might divert bomb materials or designs for profit or to achieve political ends. He feared that they might even blackmail his government as a way to preserve apartheid. After all, the former head of the programme, Wally Grant, was then leading a movement for the establishment of a separate Afrikaner homeland.

De Klerk knew that senior defence officials – and especially scientists and engineers who had worked on the programme for decades – felt betrayed, their pride battered. But he needed to win them over. No protocol existed for nuclear dismantlement. Measures for “demilitarising” South Africa’s nuclear explosives and highly enriched uranium had to be devised from scratch. In a volatile security environment, one mistake or act of sabotage could have derailed the transition he ad in mind. Recalcitrant officials eventually came around to De Klerk’s thinking. “In our hearts we all knew it was the right decision,” one scientist reflected. “These bombs are not things that can be used.”

South Africa joined the Nuclear Nonproliferation Treaty (NPT) as a nonnuclear weapons state after dismantlement was secretly completed in 1991. Accession to the NPT lifted key sanctions on the regime and underlined its commitment to reform and a new relationship with Africa and the world. Lingering suspicions that Afrikaner nationalists might use the arsenal to cling to power were quashed.

If De Klerk was hungry for Western approval, he got what he wanted. As the only country to build and then voluntarily destroy all its nuclear weapons, South Africa gained a stature in the international community that it had not held since the end of World War II.

De Klerk’s own standing as a statesman was cemented, and six months after publicly revealing the destruction of South Africa’s hidden arsenal, he was awarded the Nobel Peace Prize together with Mandela for helping lay the foundations for democracy.

Mandela and his ANC colleagues were livid at De Klerk for being left in the dark. They believed he simply didn’t want the weapons to pass into the black majority’s hands, in keeping with his party’s racist ideology.

Still, that didn’t stop the ANC from trading fruitfully on his decision in its diplomacy after coming to power in 1994. South Africa won an enviable reputation as a saintly member of the nonnuclear club – an exemplary convert after years as one of the world’s worst sinners. Nuclear rollback paved the way for the successful continentwide negotiations on declaring Africa a nuclear-weapons-free zone, resulting in a treaty that bears the name of the place where South Africa developed its atomic bombs, Pelindaba.

What might all this suggest about the prospects for denuclearisation of the Korean Peninsula?

North Korea’s failed promises to dismantle its arsenal in the past and its recent signalling – willing and pragmatic one day, intransigent the next – are obvious reasons to be wary. Yet we can’t assume Kim thinks North Korea can remain a pariah forever any more than De Klerk believed South Africa could. Nuclear weapons may be the only currency North Korea can leverage to rejoin the family of nations.

South Africa’s experience offers a glimpse of what a verifiable drawdown of North Korea’s programme might deliver internationally.

If we dare imagine that Kim Jong-un – the third-generation Kim to rule North Korea – is a closet reformer like De Klerk, he might also have an eye on what could be achieved domestically. De Klerk used nuclear rollback as a wedge to steamroll opponents of political reform, particularly in South Africa’s security establishment.

No one outside North Korea really knows whether a fundamental shift in the country’s nuclear posture would go smoothly or not. A congruence of interests across the constituencies affected – including the military, scientists, senior officials, and Kim himself – cannot be taken for granted. Indeed, the resistance De Klerk faced from recalcitrant generals could be feeble by comparison. Conversely, Kim could be the most hawkish of the bunch, unable to conceive of any foreign-policy alternative to nuclear brinkmanship.

Echoing Botha’s lament for the Afrikaner state, experts believe the Kim regime would be signing its own death warrant if it dismantled its nuclear weapons. Pyongyang has always viewed its arsenal through the prism of regime survival.

The official raison d’être of South Africa’s nuclear arsenal was similar: to ensure the survival of the apartheid regime and ward off a Soviet-backed invasion of its territory. Such delusions stemmed from a siege mentality that pervaded its decision-making structures. But South Africa’s white minority government never developed a strategy in which its nuclear weapons would be used for anything other than a test or demonstration purposes, even though they were capable of being deployed militarily. The logic was that a public test of a nuclear bomb would convince Western powers, especially the United States, to intervene on Pretoria’s behalf.

Government paranoia gave rise to the overblown idea that South Africa faced a “total onslaught” in the 1980s. North Korea is also paranoid, though perhaps more justifiably so. President George W Bush’s inclusion of Pyongyang in his “axis of evil” in the early 2000s now seems only a mild precursor to Trump’s direct threats to use his “much bigger [and] more powerful” nuclear button to “totally destroy” North Korea.

For the ruling elite, the arsenal may strengthen perceptions of regime permanence and security against external forces, but, as in apartheid South Africa, the main threat to the Kim regime could be internal, in which case the weapons have no utility.

No one can safely say what, if any limits, Pyongyang has imposed on the use of its arsenal. This uncertainty could well be strategic. In any future final-status talks with South Korea, the North’s arsenal could be a massive bargaining chip for the Kim regime.

And being unpredictable could help it secure major concessions in exchange for nuclear rollback, namely ones that enable Kim and the ruling elite to retain their power and privilege through whatever transition may be negotiated. Even if Kim is reform-minded like De Klerk, he is unlikely to be contemplating an end to his family’s seven-decade stranglehold on power.

For most of his political life, De Klerk upheld a brutal and amoral system. By becoming a reformer, he demonstrated that he had the grit and vision to destroy the bombs that were built to protect it.

Kim may not be another De Klerk. But if he is serious about reform, he might also discover that nuclear weapons are more valuable dismantled than deployed. DM

Dr Terence McNamee is based in Johannesburg and a Global Fellow of the Wilson Center in Washington, DC. Previously he was Deputy Director of The Brenthurst Foundation.