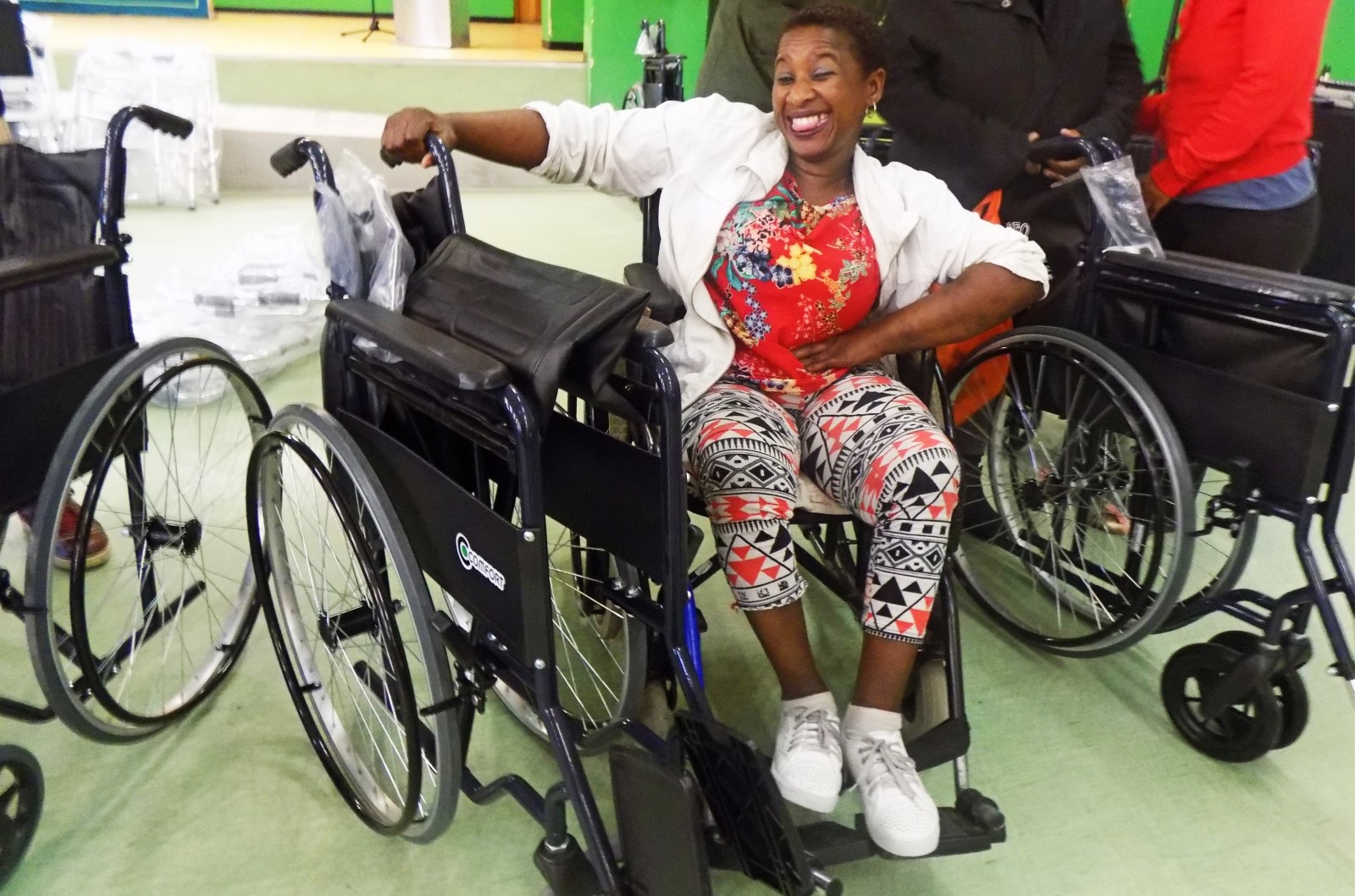 Nondumiso Wowo receives a new wheelchair at an event organised by the City of Cape Town on 7 June 2018 at Eluxolweni Community Hall in New Crossroads Cape Town. Photo taken by Hlumela Dyantyi

People who use wheelchairs for mobility encounter challenges in day-to-day life that others in society all too often are unaware of. This stark reality was brought home at a wheelchair handover event in Cape Town.

“I was eight years old. I was rushing off to school, then I suddenly fell right in front of the gate. I remember feeling this terribly sharp pain and then I felt nothing; yes, nothing. The doctors said the fall had caused damage to my spine. I’ve been in a wheelchair since then.”

Gugulethu resident Nondumiso Wowo, 39, told Daily Maverick about the fall that changed her life, during an event at the Eluxolweni Community Hall hosted by the City of Cape Town on 7 June 2018.

About 10 wheelchairs, 20 walkers and 10 commodes (adapted chairs) were handed over to Gugulethu and New Crossroads residents who have physical disabilities or are senior citizens.

Wowo lives with her 13-year-old daughter and her younger sister. Her family has tried hard to accommodate her disability by creating a stoep for her and extending the size of their toilet so that she can enter with her wheelchair, but the problem arises when she has to access public facilities.

“Besides the lack of ramps, people don’t realise it, but those plastic public toilets are a huge challenge for us. They’re too small, they have a step to get in that we can’t ride over, and they are very light, you don’t know if the weight of your wheelchair is going to make it tip over, fall and create a mess. They don’t accommodate us at all,” she said.

Wowo described the challenge of living like a “normal person with a normal life” as a differently abled person. She had to drop out of school in Grade 8 as she struggled to travel the distance to her school and back. This has been a setback to earning a living, and she has had to survive on a disability grant for most of her life.

Attempting to find alternative ways to make a living, she worked in the bead industry from 2005 to 2016 where she made and sold jewellery but she quit because she was not earning enough.

Now, Wowo has been taking short learnership courses which have equipped her with sewing and business administration skills.

Her dream job is to be a business administrator, she says.

“I’m inspired by how fast they type on those computers and that they use their hands to make all the money they have. I like people who put their hands to work,” she says.

Christopher Busika also received a new wheelchair this week. He wasn’t born with a disability, but in 1998 became ill.

“They (doctors) said there was a lot of water in my head, and it blocked my brain, and it blocked my legs so it led to me being like this, not being able to move properly. I can do things for myself, my brother helps but I don’t burden anyone.”

Busika says that he never fully understood what led to his disability or what his condition is called, because the doctors explained it to him in English.

Before becoming disabled, he used to work as a tool cleaner for a railway company in Saldhana Bay. He would clean, repair and hand out tools but he was let go because he could no longer fulfil his duties when he lost his ability to walk.

Since then, he has not been able to get decent work. He survives on the disability grant of R1,600 and “piece jobs” that he regularly gets.

“I use my hands. I do piece jobs. I make holes in tins or sort out cardboard for packaging, it helps put bread on the table but it’s not enough. I have four children to support,” said Busika.

Three of his children live with his sister in Johannesburg and one with a relative in Cape Town. It saddens him that he cannot physically take care of his children and provide for them financially, but people with disabilities are rarely hired.

Busika was excited to receive a new wheelchair. He bragged that it was more compact and looked “cooler”. He hopes that his new wheels will assist in him getting a job.

Jennifer Dlikidla did not seem as excited as the other residents who received their wheelchairs. Even though she was happy to be able to get around in a new wheelchair, she has many other problems as a disabled woman.

“All I want is to get a house so my child can live with me again. He misses me, my disability affects him a lot, it’s not nice that he has to live on the other side of Cape Town, but there isn’t enough space. It really hurts.”

Dlikidla, 37, was born with a disability. Like Busika, Dlikidla says her mother never fully understood what her disability was because it was explained to her in English.

Dlikidla’s world fell apart when her diabetic mother died in 2001.

“My mother used to give me everything I needed, she spoiled me and made sure that I was taken care of all the time.”

Without the loving support of her mother, she faced abuse from relatives she lived with and nastiness from others around her.

“She (a relative) started hiding food from me and locking me out. The neighbours got tired of helping me out.”

Her only refuge has been her friend, Sylvia, who has given her a place to live and helps to take care of her and her one-year-old daughter.

Dlikidla also has a 16-year-old son who is taken care of by her uncle in Site B Khayelitsha because there is not enough space in the back room that she lives in in New Crossroads. Her son is resentful of being separated from his mother, and this has put strain on their relationship.

As Mayor Patricia de Lille handed over the wheelchairs, walkers and commodes to residents, she emphasised the importance of creating a caring and inclusive space in Cape Town.

De Lille said it is important that residents with disabilities get mobility.

De Lille had praise for ward councillor Luvuyo Zondani, who had brought the needs of the disabled and senior citizens in Gugulethu and New Crossroads to the attention of the City of Cape Town. Zondani works with the SACLA Health Project and provides health care and home visits to pregnant women, children, the elderly and people with disabilities.

“When we go bath the elderly and the disabled at their homes, we get there and the house is locked, we have to get the key from the window sill or from neighbours because family members have to go to work. We get in there, bathe them and also help them take their medication. It’s not an easy job but it has to be done, especially in our communities.”

Guest speaker at the event, Douglas Adams, said there needed to be more awareness of disabilities in communities.

In South Africa, 7.5% of the population live with some form of disability, according to Stats SA. A total of 1,067,402 South Africans are beneficiaries of a disability social grant.

“My teacher thought I was playing when I told her I couldn’t see the board. My last exam, I couldn’t write it, I had to memorise everything with my brain and someone had to write for me because I could not see. No one understood what was going on with me, I did not understand. What is glaucoma? No one knew it. People aren’t educated on these things,” he said.

Adams, who was born in Caledon and grew up in Heideveld, was diagnosed with glaucoma at a young age and has been blind since. Adams started noticing the difference in his eyesight when he was unable to see the board in class. He was sent to a school for the blind, where he learnt how to read and write in braille.

Adapting to all the sudden changes in his life led to a lot of distress. Adams received no counselling, and no support from his family. He stayed in hospital for three years and his parents never came to visit him.

Being blind changed his life.

“I had dreams and ambitions but I was blind, so what now? People were very mean to me and I struggled to forgive my parents for abandoning me in my time of need but I had to ask myself, do I drown now or rise up? Do I let my disability overcome me? No. I rise up,” he said.

Adams encouraged disabled residents never to give up on their dreams, and to become leaders in their communities.

He challenged others in the audience, saying they do not understand how it feels to live with a disability.

“Close your eyes. How do you feel? Do you feel lost? Are you confused? Are you scared? Welcome to my world. That is how I feel every day. Now open your eyes. Be grateful.” DM