Woza Albert! – wrestling with the possibilities of freedom 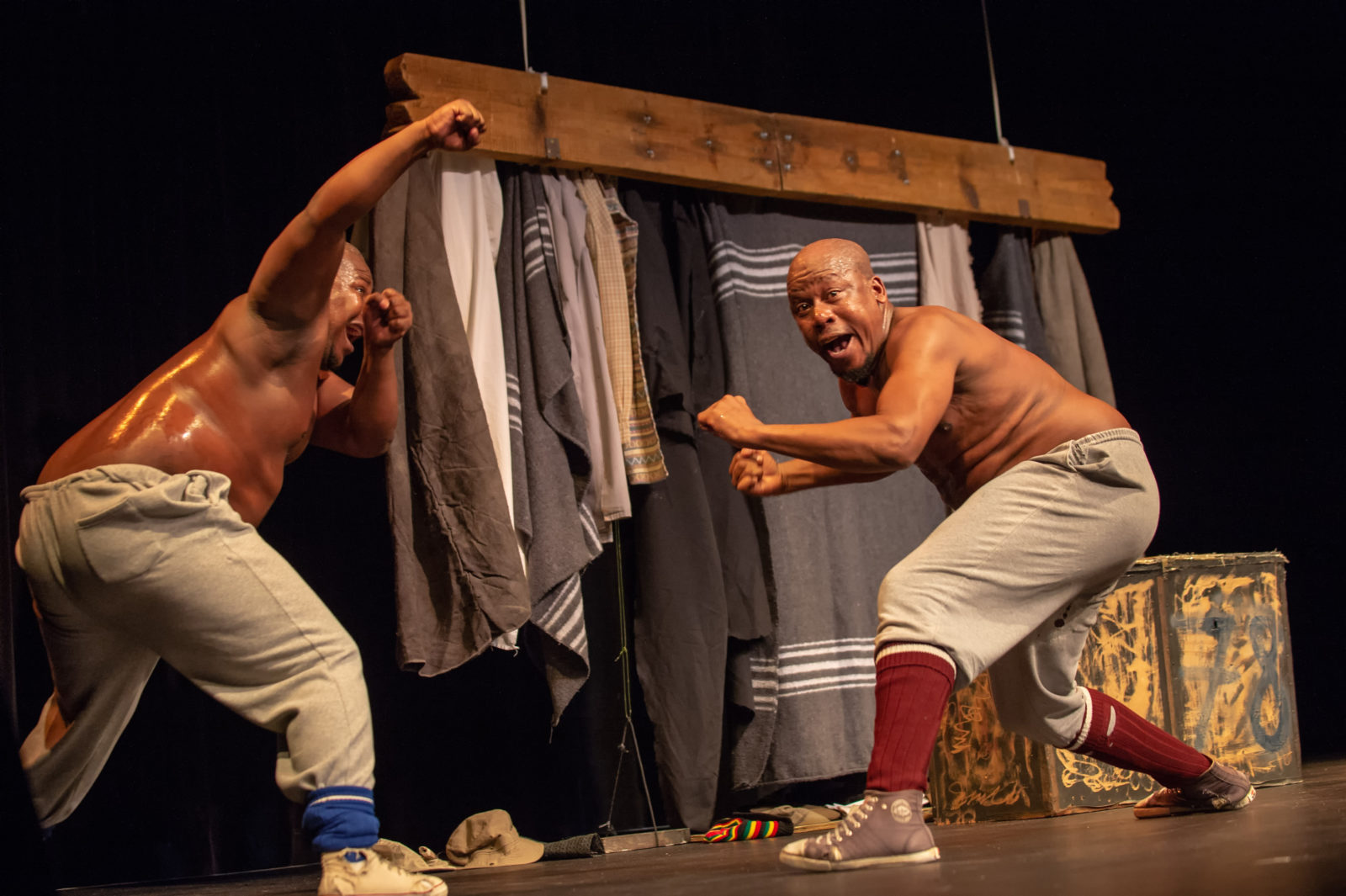 If the purpose of the theatre, inherently and philosophically, is to make the public eye get a clear view of the how the inner turmoil of the mind and the vicissitudes of the heart affect one’s own normal behaviour, then Woza Albert! hits the spot. Satire makes a comeback as the champion of logic in a post-truth world.

On a 1,069-seat theatre stage at the Joburg Theatre, Hamilton Dhlamini was reprising his long-standing role in the famous township play, Woza Albert!

He is joined by Segomotso Modise; the two men, big-bellied and topless, went on to excite and challenge the audience with only humour as their weapon.

Township plays come from a lineage of poor black theatre companies founded in someone’s RDP-sized government house, when black people did not have the proper props to use on a stage.

With no fancy sets, bad lighting and nothing but chairs as props, black actors had to recreate a whole world on the stage, using very little but with great talent. And so this first generation of township theatre writers and actors had to imagine the rest.

And what started as a disadvantage has grown to be a unique and powerful strength of the township play. The actors, as the brilliant Hamilton Dlamini has shown in this play, had nothing but their body and pure grace in movements to convince the audience that what they were seeing was real.

After over 20 years of performing in the same role, Dhlamini embodies the striking image of a mastercraftsman confident in his work, excellent in an art form he earnestly believes can change peoples’ lives.

The play achieves great heights in displaying the “South African Human condition”, as different people are asked a poignant question: “What will you do when Morena (Christ), makes his second coming in South Africa?”

Each person gives their own response — a vendor, a barber, a domestic worker, a manual labourer and a soldier, all with different answers.

What is common among them is that they want their situation to be better.

The vendor wants more people buy his meat so he can go to school, the barber wants a bigger shop in Johannesburg CBD and the manual labour wants to take a break from brickmaking and building houses with only a shack at home.

This small, yet profound scene gives a glimpse of how the mind wrestles with the possibilities of freedom, how far or not it allows itself to dream, to take the risk of hoping at a time where disappointment has been the constant norm.

Physical theatre is all about people moving constantly and frantically on stage but going nowhere fast.

It demands stamina from the actors. The sound made by the mouth becomes crucial to the narrative, the humour and the point intended.

Woza Albert! touches on the varied experiences of a people that continue to be plagued by the same issue that causes the inequality in our country till today: landlessness.

One is confronted with a constant onslaught of jokes and laughter, until it hurts, much like the different stories of black South Africans shown on the stage.

When Mbongeni Ngema, Barney Simon and Percy Mtwa wrote the play in 1981, they would have known that writing about this type of subject matter — the plight of black people in an apartheid state, would be met with opposition.

Not only from the laws that banned it, but from their audience who might not want to be reminded of the absurdity in the conditions of that time. Those who wanted to plod along as though the sky was not collapsing.

The success of night-time TV talk shows and their hosts, like The Daily Show with Trevor Noah and Last Week Tonight With John Oliver, can be mostly attributed to comedy’s long-standing practice of making fun of commonly held and assumed beliefs.

Comedians are funny because they make jokes about things that we know are true but feel powerless to do anything about.

Ultimately, Morena eventually does come back, well at least in the play, and what he finds is poverty and cruelty, an unwelcoming apartheid state that decides to imprison him.

He performs some jaw-dropping prison breaks every time they arrest him. With the use of an iron fist and regardless of his prison-busting miracles, the state finally finally locks him away.

Not long after that he is sighted walking from Robben Island on the water, arriving at a cemetery when he gets to the shore.

At this cemetery, legendary struggle stalwarts were buried together in the same place. And there and then, Morena started calling up these heroes to come back to life and save the times.

Woza Albert! as Albert Luthuli, the late ANC leader’s spirit is called, asking him to come from the grave.

Woza Sobukwe! as the first PAC leader Robert Sobukwe is also called forth from the grave.

Woza Lillian Ngoyi! as the founder of the ANCWL is called from her rest.

And many more are called by Morena to rise up.

They’re spirits and wisdom seem to be needed in our time. DM

Woza Albert! is on at the Joburg Theatre until 17 June