Register of Members’ Interests: Baleka Mbete fails to disclose Speaker’s Ball sponsorship – and one in ten didn’t submit at all 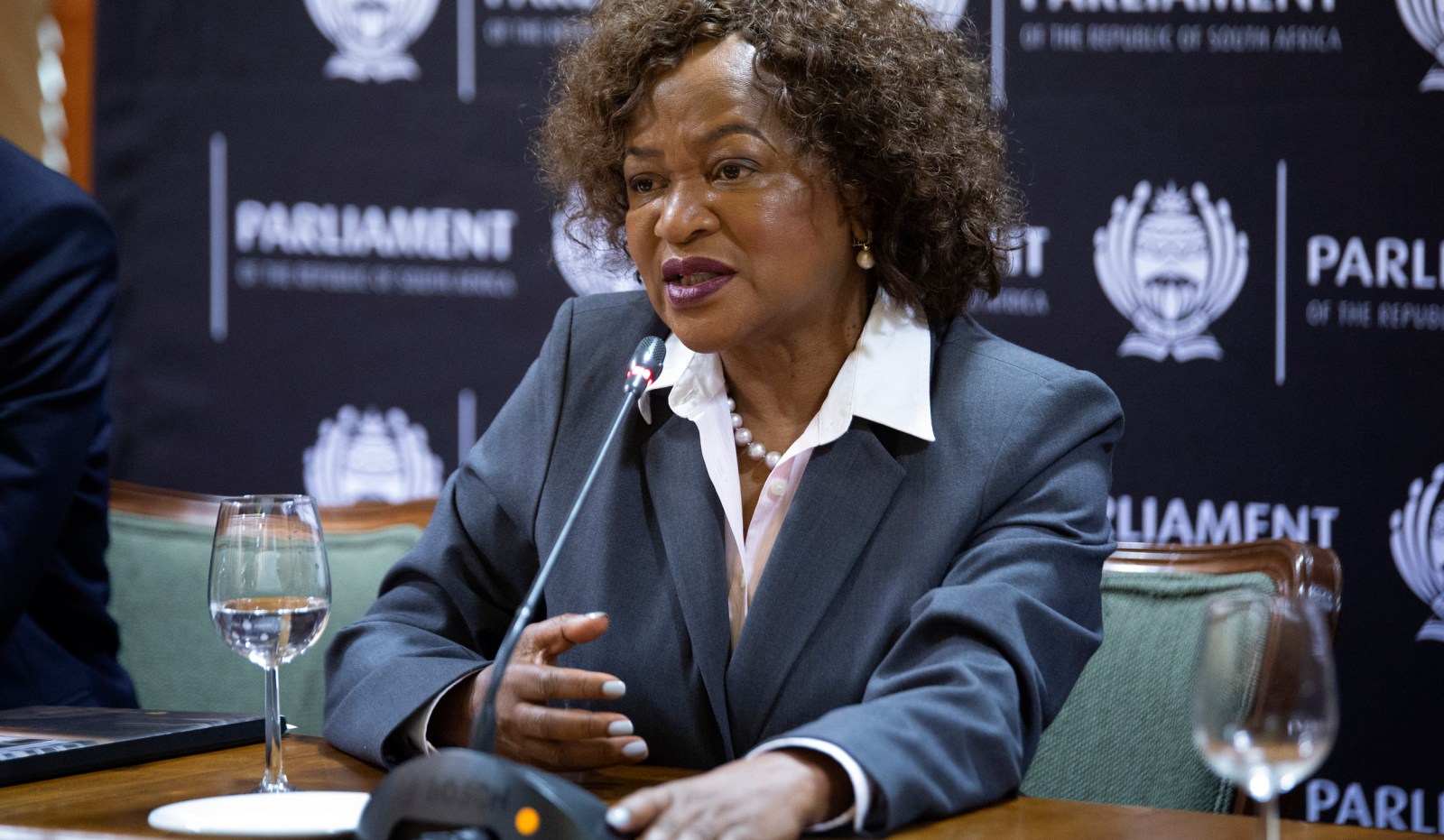 National Assembly Speaker Baleka Mbete held a briefing for journalists on Tuesday 22 May prior to their presentation of the Budget in Parliament. Photo by Leila Dougan

National Assembly Speaker Baleka Mbete had no disclosure to make regarding the 2017 Speaker’s Ball as she did not receive or benefit from any sponsorship because it was hosted by a “private individual” to celebrate women’s leadership. That’s according to Parliament following this week’s release of the latest Register of Members’ Interests that publicly records parliamentarians’ financial interests, including sponsorships, benefits, shares, gifts and hospitality, pensions, properties and trusts. But with effectively one in 10 parliamentarians having failed to disclose, questions arise about compliance. Yet the 2017 register includes one MP who died in 2014.

National Assembly Speaker Baleka Mbete’s Speaker’s Ball following the 2017 State of the Nation Address (SONA) raised eyebrows as the invitation prominently featured her photo and an RSVP address that was an ANC email. Both the ANC and Parliament publicly said it had nothing to do with either, and neither contributed a cent.

“This dinner is not hosted nor funded by neither (sic) the African National Congress nor Parliament. It is a private dinner,” Mbete was quoted as saying in the statement issued by the ANC on 8 February. Elaborating that the event was meant for stakeholders, colleagues, friends and comrades, the statement added:

“Comrade Mbete intends on having this dinner as an annual meeting and networking opportunity for those close to her.”

That this was a “private” event was Mbete’s response at a media briefing just ahead of SONA 2017. She reiterated that “it does not utilise a single cent from Parliament”, but did not respond to questions as to whether it was funded by sponsors or paid for from her own pocket.

A month later various sub-contracted suppliers to the luxury hotel venue of the Speaker’s Ball had yet to be paid. While several companies confirmed the outstanding invoices, few wanted to elaborate.

In the 2017 Register of Members’ Interests category of sponsorship, Mbete states “nothing to disclose”.

That was in line with Parliament’s disclosure regimen as Mbete had not benefited or received any sponsorship for the Speaker’s Ball, according to Parliament spokesperson Moloto Mothapo’s written response to a request for comment on Thursday.

“She (Mbete) did not initiate, host, organise, fund, facilitate funding or resource the event. The event was organised and hosted by a private individual, using the occasion of the State of the Nation Address, to celebrate and acknowledge the leadership of women in society. The Speaker was thus invited along with a number of other women leaders occupying leadership positions in society, and she attended in appreciation of the gesture of the hosts.

“The event organisers did not host the event on behalf of the Speaker, nor did they need permission to do so. Members of Parliament get invited, in their official capacities, to a wide range of events, and they are not required to declare in terms of the ethics code as there is no benefit of any kind obtained.

“As the head of the National Assembly, the Speaker is aware that she must lead by example as the custodian of ethical conduct, and thus all disclosures she makes annually are accurate, true and beyond reproach,” said the written response.

The Code of Conduct for Members of Parliament, updated and adopted on 13 May 2014, does not define sponsorship, but requires parliamentarians to disclose “the source and description of direct financial sponsorship or assistance from non-party sources and the value of the sponsorship or assistance”. Elsewhere it stipulates that “the nature and source of any other benefit of a material nature and the value of that benefit” must be disclosed.

The code sets out “minimum ethical standards of behaviour that South Africans expect of public representatives” to build public trust and confidence.

It requires annual disclosure of, among others, gifts and hospitality, such as free lunches, drinks, use of hotels and local travel, valued at over R1,500. Also to be declared are discounts, directorships, property – addresses are listed in the confidential section like the financial interests of spouses/ partners/ permanent companions – remunerated employment outside Parliament and pensions. Trusts must also be disclosed, with details of all accrued benefits and all other direct and indirect benefits.

Mbete disclosed gifts including a scarf from the Swiss ambassador and a carpet from the Governor of the Iranian Central Bank, and also directorships in “Mandumo Investments” and “Mandumo Holdings” and a not-for-profit entity, SBEU Foundation.

As since 2014, Mbete in 2017 again declared 277 shares in Turncard Trading 118, one of the two entities which received a combined share value of R27-million in the controversial 2010 Invictus black economic empowerment deal by Gold Fields. The 2017 declaration gives the value as “10c per share”. In 2014 and 2015 the value was declared as “+- R2m (million)”, alongside the declaration of the other entity in this BEE transaction, Rich Cove Investments Pty (Ltd) whose 100 equity shares with a nominal value are disclosed as “+- R25m”. The 2016 register reflected no details beyond “ordinary shares”, with a nominal value “(Estimate) based on fluctuate currency value”.

Since 2016 Mbete has disclosed trusts: Domicile Trust – in 2017 it reflects a property as “detail of benefit” – and Balwa Trust (it lists “Ms Baleka Mbete and Nominee” in the benefits detail section), while “Mondumo Trust” has now also joined the list.

Trusts are interesting as there are few, if any, legislated disclosure requirements and, unlike registered companies or listed ones, do not have to disclose all their beneficiaries or benefits. Court action would be needed to obtain details.

And so EFF leader Julius Malema in 2017, as in previous years, has “nothing to disclose” – except in the section on trusts. There he lists the names of several trusts: Ratanang Family Trust – according to the 2012 “On-Point” public protector report into tender irregularities in Limpopo it was paid R2-million – Munshedzi Family Trust, Mazimbu Trust and Kopano Charity Trust, which is listed twice in the 2017 register. No further details are given. In the 2015 and 2016 registers the beneficiary of the Ratanang Family Trust is listed as “J S Malema”, and details of benefits as “none”.

DA national leader Mmusi Maimane also declared no benefit from his Kgalaletso Kgosi Trust; listed alongside is sole proprietorship of Maimane Training and Communication and directorships in two charities.

When in 2014 Cyril Ramaphosa became deputy president, he placed his Shanduka and other business interests into what’s known as blind trusts which effectively remove involvement in and gain from the business. In the 2015 Register of Members’ Interests Ramaphosa declared three trusts with “deferred benefit”, alongside his trusteeship in the Shanduka Foundation Trust and the Cyril Ramaphosa Education Trust. There remain substantial property declarations, and directorships in game and cattle farming and abattoirs.

By 2017 Ramaphosa also shed his Shanduka Trust involvement, but declares the Cyril Ramaphosa Foundation Trust – and two loans totalling R126.8-million for game and cattle farming – in what’s set to be his last declaration to Parliament. As president he no longer is an MP and will make declarations only to the Cabinet secretary in terms of the Executive Ethics Code. Ministers and deputy ministers also declare their financial interests to the Cabinet secretary, alongside Parliament, as all but two are MPs. While these executive declarations are accessible, they are not published as Parliament’s are.

But the 2017 Register of Members’ Interests has been a prickly one, showing flailing disclosure compliance. Forty-two parliamentarians – one in 10 among the total 454 members of the National Assembly and National Council of Provinces (NCOP) – had failed to submit their declarations, it emerged at Tuesday’s release by the Joint Committee on Ethics and Members’ Interests. The previous year it was 16.

The undertaking by committee co-chairpersons, Amos Masondo and Omie Singh, that there would be investigations of compliance defaulters comes in the wake of accusations that the committee had moved at snail’s pace on several pending disciplinary matters.

EFF Chief Whip Floyd Shivambu has had “nothing to disclose” across the board since 2014. But then so did plenty of other parliamentarians, who are not ministers or deputy ministers.

From the 2017 Register of Members’ Interests it emerges that a significant number do not seem even to own properties despite their around R1-million annual salaries, plus parliamentary perks. Or they could have disposed of their properties due to hard times or speculation. For example, one MP who in 2014 declared six properties, in 2017 stated “nothing to disclose” in the property section.

Questions arise not only over the quality of compliance in both the spirit and letter of the code, but also monitoring and verification of disclosure submissions.

The 2017 Register of Members’ Interests includes the late IFP MP Mario Oriani-Ambrosini having “nothing to disclose”– almost four years after his death in August 2014. DM