November 13: Attack on Paris – the bare bones of terror 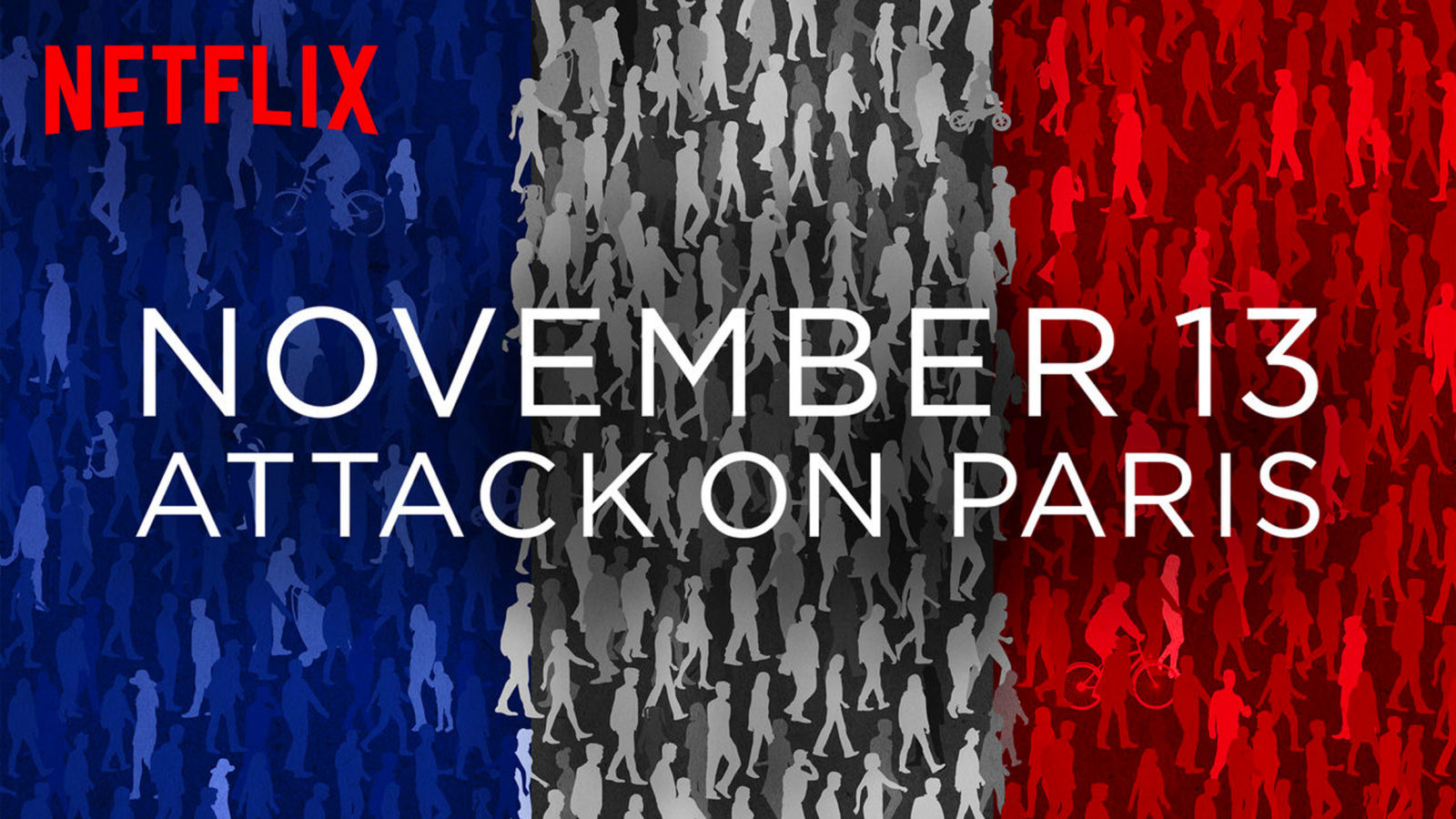 Stardust and confetti. Cellphones ringing. And silence. You might think you’re at a wedding under a starlit sky. But stardust and confetti are how a man describes the aftermath of a suicide bomber blowing himself up. The cellphones are hidden in a “hill” of human bodies in the “pit” at a theatre. They won’t be answered. Watching November 13: Attack on Paris takes you to the dark heart of what it is like to be a victim of a terror attack.

But everyday French terms like the last two gain an ironic depth when the speaker is using them to describe something far from ordinary. To say that they ran away from terrorist gunfire “tout suite”. Or to resign themselves to the seeming certainty that they were about to die. Voila. There it is. As if to say, there’s no point in fighting it. And spoken with a shrug.

It’s not easy viewing, obviously. Do you really want to watch this? I passed on it for several days before reminding myself of a dictum I’ve often used: Don’t be afraid to know the worst of life, because the more you know, the better you’re armed.

And you do ask yourself: is this akin to stopping at the scene of a road accident to watch as the medics arrive, the car is cut open and a wounded or dying human being is pulled out, or a dead body? Is it healthy? Is it wise? Is it an affront to the spirit? Will it inhabit your nightmares?

But writing is story-telling and stories impart wisdom and knowledge, which aren’t the same thing at all. I’d sooner know than have no idea what to do if terror ever struck nearby.

No one else can describe what it is like to be the victim of a terror attack other than those who were there; who can say that the smell is of a mixture of “iron, blood and gunpowder”, and to know what that smells like. People who can say this:

“The violence is such that it dehumanises us. It pushes us to be indifferent to the suffering around us. The corollary to this, by contrast, is that however minute it might be, we can try to create a bubble of humanity – three square centimetres all around us.”

That little “bubble of humanity” occurs inside the Bataclan theatre in Paris on the night of November 13, 2015, when terror struck several street cafés, the Stade du France stadium and the Bataclan theatre. And the survivors speak intimately into the camera, talking us through it all, inch by inch, as if we’re trapped with them, and it is trenchant and heartbreaking.

November 13: Attack on Paris is made by the Naudet brothers, Gédéon and Jules, and is subtitled “The deadliest attack on Paris, as told by 40 survivors”. They do not attempt to show the horror itself other than activity in the street outside – only its sounds and vicinity – choosing rather to let the survivors rake through their memories and personal trauma, which you can see is palpably difficult for all of them. Even the hardened chief of police admits to having gone for counselling after the event, while a rookie cop, having lived through the horror of it himself, risking his life, manages to hold it together until, back at the station late at night, he goes to a private room where he collapses in tears.

Other attempts to document the French tragedy came to naught, but the brothers were uniquely placed to succeed. They are the makers of the grimly celebrated 9/11 documentary, also available on Netflix, which came about because on the day of the September 11, 2001 attack on the World Trade Centre in New York, one of the brothers was there to make an innocent documentary on the city’s firefighters. The experience marked them deeply, and they went on to make that brilliant but hard-to-watch documentary.

For this series, they were able to persuade victims to speak on camera by relating their own experience of 9/11. The result is a documentary that will be remembered and archived for generations. It is an important work.

The brothers’ touch as directors is so, so soft; remarkable considering the subject. It is the touch of one who truly empathises. Their camera stays on faces of those who have just told us something impossibly hard to tell, and lingers on their silence that follows so that we can almost tell what they’re thinking, almost see what they’re seeing.

A little woman (as she describes herself, explaining that this was why she was on the balcon and not in the fosse below) seems almost laissez-faire about the events she witnessed, until finally, near the end of the three-part series’ third hour, she falls apart on camera when describing the “hill” of bodies she saw in the “pit” while filing out of the Bataclan at the end of it all, under police guard. Her seeming nonchalance has only been a defensive weapon.

A woman explains how she and her lover held each other close and found themselves doing that most romantic of French things while people were dying around them, punctuated by rifle fire. A deep, lingering kiss. A chosen way to die. They are to survive.

A nerdy looking guy who turns out to be one of the night’s unlikely heroes finds a strange nirvana.

“That’s when all the fear I’ve felt during the attack vanishes. It turns into a weird feeling, the feeling that it’s all going to end today. I tell myself I’ll be murdered; so I’m not scared any more. I’m just waiting. I’m waiting for it to happen. I’m thinking about stuff like, ‘I hope my apartment is tidy so my parents won’t have too much work to do. I hope it’s easy to do. Voila.’”

There it is. Might as well get on with it. Except… he survives and goes back to that apartment, tidy or not.

A toothy woman seems almost to be smiling as she tells her own story. A terrorist is right in front of her.

“I look him in the eyes because I need to know what his intentions are. I was so paralysed with fear that I couldn’t get up right away. So I warn him, I say, ‘I’ve got a slight disability. I can’t do it.’ I was testing him to see if he was going to shoot me down. He looks at me in the eyes and says, ‘You’re fine. Get up.’ So Grégory helps me up. We both get up.”

Grégory is the nerdy guy: “We get up. It’s the moment when…” (his voice cracks, he looks away and back … “we’re not dying right now.”

In the pit, amid the cold, stiffening bodies, many people are playing dead, hoping to cheat the attackers. A handsome man who could have stepped out of Vogue relates how a shooter was on the balcony, picking off prone bodies when their cellphones rang to reveal their position. “I was lucky,” he says. “My phone was on vibrate.”

Another man relates how a victim, shortly before being shot, yells defiantly at his killer: “You can shoot me right now! You won’t be able to get what I have here!” Pointing to his heart. His soul. Then dying.

There are even bizarre moments of black comedy. At one point near the end three friends are huddled under terrorist guard near an exit and hear the voice of a police or fireman outside yell something. They find sufficient reserves of Parisian snobbishness to shake their heads and smile at the thought that they are being saved by a thick-accented southerner.

And when a hostage yells to the police outside that the now besieged terrorists are ready to negotiate and “they want walkie-talkies”, a terrorist himself interrupts. “We have smartphones!”

One single shot by a brave fire chief changes everything once the police and fire services arrive. He kills a shooter, changing the game.

Then, a huge blast.

“It explodes throughout the room. Confetti. Like a burst of stardust across the room,” spaketh one David, a longhaired dude with a poetic way about him.

Vogue man sums the endgame up best. The moment when all in the room seemed to understand that the denouement was nigh. A room that had been remarkably silent for so much of the duration of the ordeal, as victim after victim has described the strange stillness of so much of it.

“The wounded started to express their agony. And I had the impression the room turned into a collective moan of death and agony.”

And David the longhair: “I feel guilty for still being alive.”

In the end, you’re looking down at the street below the theatre as a snake of human beings, arms clinched, walk in single file away to their future, leaving the dead behind. The image puzzles you at first because it’s strangely familiar. Then the thought crystallises. It looks like a Conga Line. DM