GroundUp: The right to protest is being violated in small mining towns 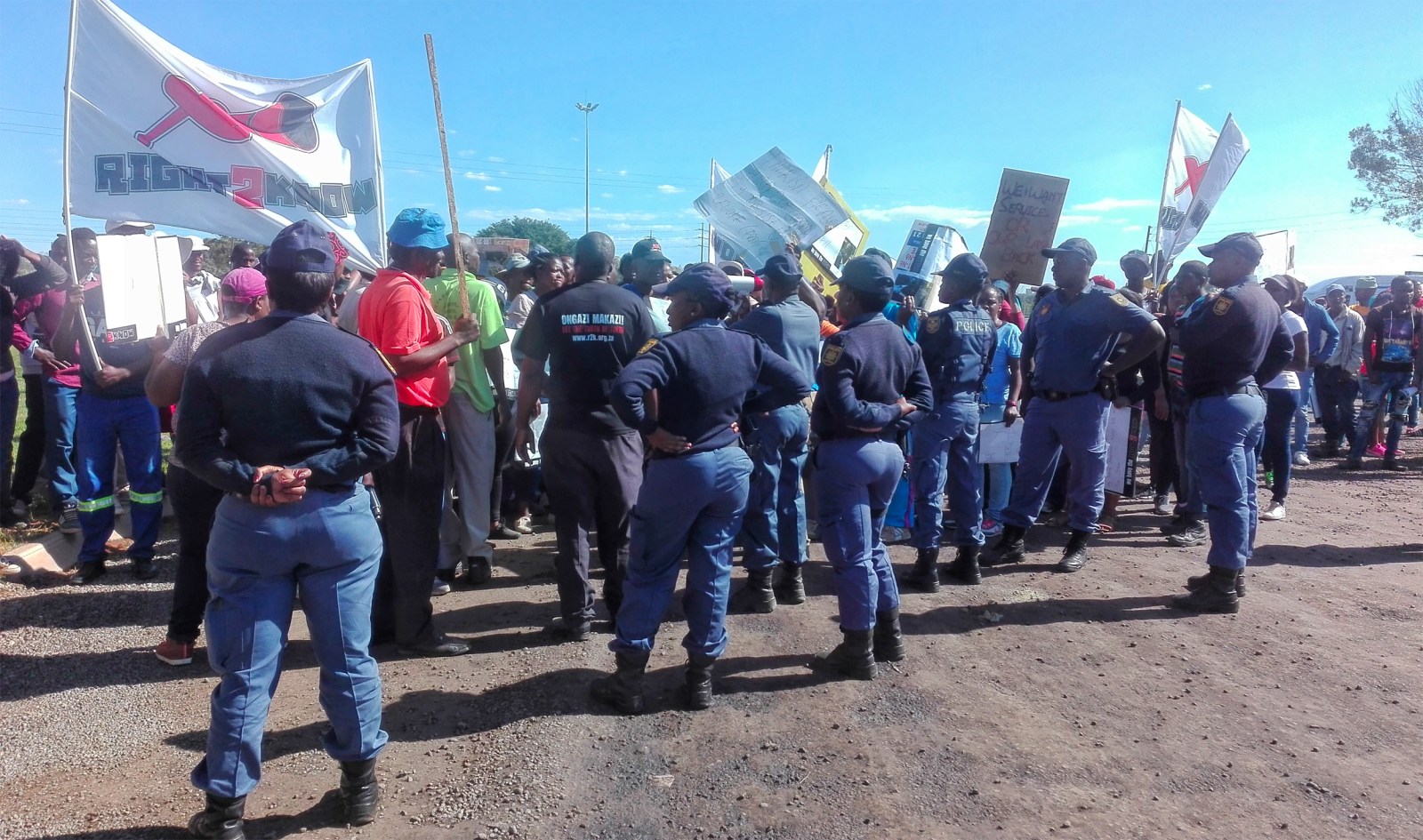 The Marikana Youth Development organised a protest march on 25 May. In many small mining towns, the right to protest is being violated, say the authors. Photo: Bongani Xezwi

Municipalities, mine management and police collude to prevent protests.

In the small and remote mining towns of Limpopo, North West, Mpumalanga, Free State and Northern Cape people are still faced with serious barriers to exercising their right to protest.

In the Rustenburg municipality in North West, Tharisa Mine management has been denying the members of the Marikana Youth Development (MY) the right to protest by making use of a court order given on 5 October 2017 against specific members (Raserole Mashamaite, Piet Mamagali, Mluleki Damse and Phumeza Masoka). This prevents them from embarking on any protests, supposedly because they are violent. Further, the Tharisa Mine management has consistently refused to receive the community’s memoranda and has ignored all correspondence from the community.

At the request of the MYD, Right2Know (R2K) launched a new notification of a pending protest action to make the community demands known. Among other things, MYD wants Tharisa to account for 3,000 jobs promised and to make public the mine’s Social and Labour Plan.

However, the police simply handed R2K the same court order that the mine has been using to prevent the MYD and the community from protesting and told us there could be no protest.

During one of the meetings, the SAPS officer in charge of public safety said his seniors had suggested that rather than a march to Tharisa Mine it would be better to arrange a meeting between community leaders and mine management. Mine management usually chooses this option because there are fewer people involved in such engagements and it is easier to control and manage the process, as opposed to dealing with large crowds protesting at mine premises.

At another meeting, the R2K/MYD team was told that if we wanted to march then we should go to court and apply for permission. The officials were asked to produce the court order. As R2K and MYD representatives were going over the order, the police declared that there was no more time and they had decided to prohibit the march.

When the MYD/R2K team asked for written reasons for the prohibition of the march, it became clear that the police were relying on a court order which did not apply to MYD as a whole but only to the four named community members.

It was then decided to notify the police of an intention to protest on a different date and also to change the name of the MYD convenor, since the previous convenor was one of the named individuals. This we hoped would prevent the police from using this as an excuse to ban the protest again.

A few days later, we had another meeting where the police continued to argue that no protest could take place. But after debates between the municipality, mining management, the MYD and R2K’s Outreach Organiser, the police finally backed down and agreed that there was no acceptable reason for the protest to be banned.

However, the very next day (the day before the march) yet another court order was issued by the local magistrate, stating that the march should only be allowed to proceed to the Marikana police station and not to Tharisa Mine. The reasons given were that mine management had not been informed about the march and that police had received information about community members planning to attack mine premises with petrol bombs.

Both of these reasons were lies. R2K had already sent mine management an email to notify them of the march, and no evidence was produced to substantiate the allegations against the community. Besides confirming the bias of the local magistrate, the lies revealed the hidden hand of former SAPS Commissioner for the North West Province and actor in the 2012 Marikana massacre, William Mpembe. Now head of security for Tharisa, Mpembe wrote the affidavit claiming that community members were preparing a violent attack.

In spite of everything, the march went ahead on 25 May. The community gathered and we all agreed that the police were welcome to search everyone to make sure no one was carrying any weapons. We even agreed among ourselves that anyone taking part in the march who drank alcohol ran the risk of being excluded from the march.

The march went ahead without incident. But on arrival at Tharisa Mine, marchers were greeted with barbed wire at the gate. This really upset community members because it reminded them of the Marikana massacre where so many were murdered by the SAPS and other special units under the leadership of Mpembe.

It became very clear during this process that the local municipality had been misusing the same court order, based on lies, to avoid any engagement with the community, even the notification by the community of intention to protest. Understandably, the Marikana community sees this as a tactic to undermine their right to protest, just as Tharisa Mine is doing.

This kind of conduct is not only happening in Rustenburg and at Tharisa Mine; it is the conduct of mine management across rural areas and small towns in South Africa, working hand-in-glove with local municipalities. Many communities where there are mining companies have been reaching out to R2K, complaining about the right to protest being undermined. DM