Life is Wonderful: Retelling the Rivonia Trial with new voices 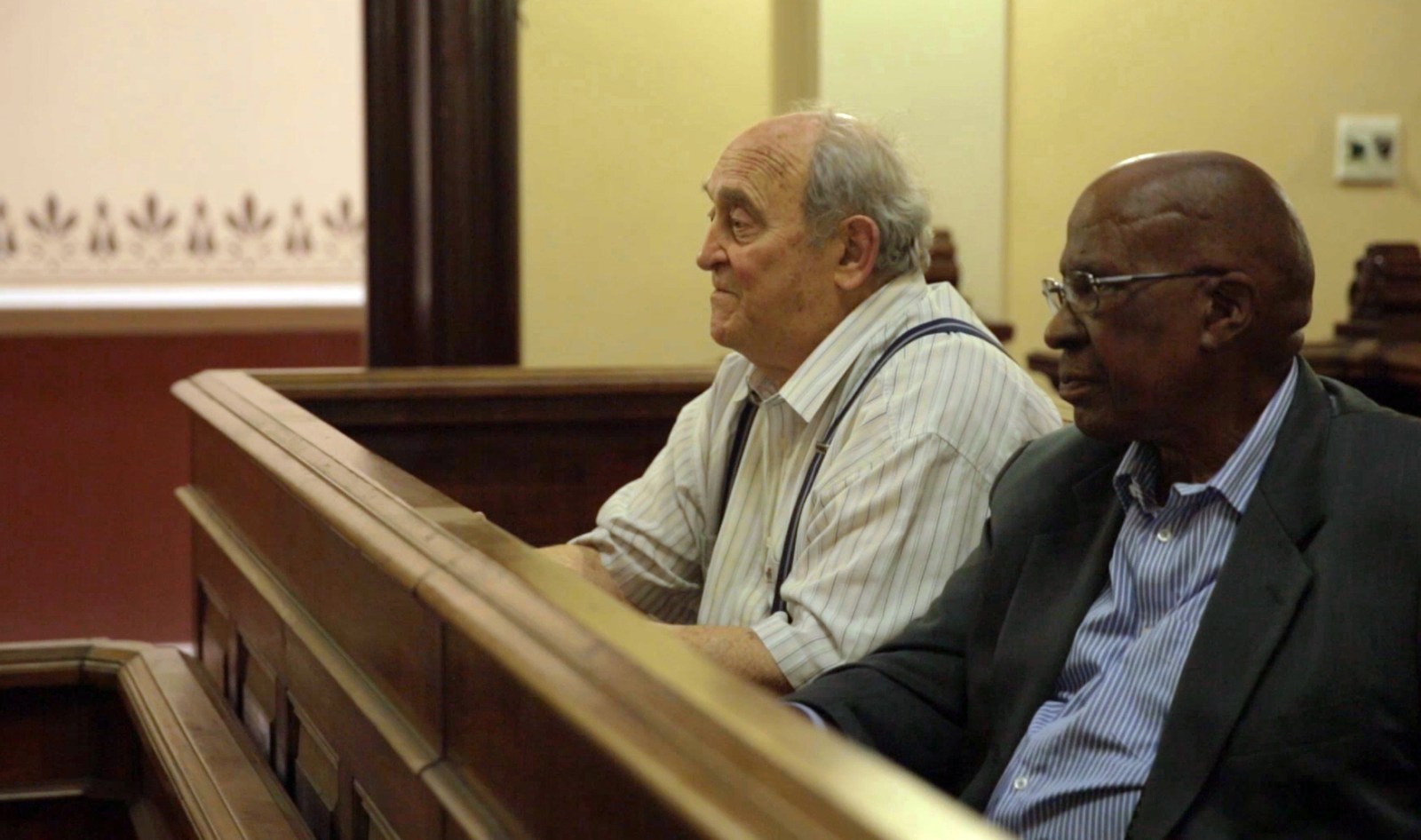 Denis Goldberg (Left) and Andrew Mlangeni (Right) sit in the courtroom of the Rivonia Trial as they reflect on their experiences. (Credit: Nick Stadlen, “Life is Wonderful”)

Life is Wonderful features the surviving defendants and lawyers of the Rivonia Trial as they recount the apartheid-era court case that resulted in life-imprisonment for eight struggle heroes.

In the courtroom of the Rivonia Trial, where 50 years earlier his life hung in the balance, Denis Goldberg recalls his exuberant celebration upon receiving a life sentence in place of the death penalty.

“Life is wonderful!” he cried to his mother at the time.

Goldberg is a prominent character in a new documentary, where he re-visits the courtroom he received his life sentence, and recounts his time in the anti-Apartheid movement. The film was directed by former United Kingdom High Court Judge Nick Stadlen and debuted at the Encounters Film Festival in Cape Town on Friday night.

Life is Wonderful features the three surviving Rivonia defendants (at the time of filming), Goldberg along with Andrew Mlangeni and Ahmed “Kathy” Kathrada, as they relive the trial and their participation in the struggle both before and after the judge handed down their life sentences.

Life is Wonderful also focuses on the three surviving members of the legendary Bram Fischer-led defence team, Joel Joffe, the attorney to the main defendant, George Bizos, one of the advocates who represented the defendants, and Denis Kuny, who represented James “Jimmy” Kantor separately. Kantor, the brother-in-law of escaped defendant Harold Wolpe, was not in the ANC and was tried in place of his relative, warranting separate legal representation.

Last year, two of the film’s lead subjects, Joffe and Kathrada, died. Joffe was 85, Kathrada 87. Today, Goldberg is 85, Bizos is 89, and Mlangeni turned 93 on Wednesday this week.

Stadlen feels the pressure to share these stories now, while the unsung heroes are still alive and can recount the trial first-hand.

The Rivonia Trial occurred after a 1963 police raid on the Lilliesleaf farm, home to secret meetings of ANC leaders, resulted in the police confiscating a series of confidential ANC documents which spelled out the the party’s plans for armed resistance against the apartheid regime. Ten activists were put on trial, among them Nelson Mandela, Walter Sisulu and Govan Mbeki, and were charged with two counts of sabotage. They faced a death sentence for their alleged “crimes”.

The film attempts to unveil the narrative on the Rivonia Trial’s untold stories and figures. Mandela’s iconic speech, Fischer’s historic defence, and Sisulu’s superior intellect during his cross-examination are the three events that have come to define the trial. Stadlen is now sharing other elements of the story.

“They were ordinary people willing to risk everything,” Stadlen says of the Rivonia defendants and their lawyers. “I wanted to show that they were a multi-racial band of comrades fighting for a non-racial South Africa.” Goldberg, who is white, Kathrada, who is Indian, and Mlangeni, who is black, perfectly captured this idea for Stadlen.

The film features Goldberg most prominently, as he is interviewed in a series of contexts, at the courthouse where he was put on trial, in Stadlen’s home, at Lilliesleaf, and on Robben Island (where he was not imprisoned, but his comrades were). While Mlangeni is often by Goldberg’s side, Goldberg does most of the talking.

In their interviews, Goldberg, Kathrada, and Mlangeni illustrate the behind the scenes stories of what went down in the time leading up to, and after the Lilliesleaf Raid that resulted in their arrests. They share stories about the reality of the armed resistance plans, the conversations that happened in the holding cell before the trial, the courtroom reaction to when Mandela defiantly stated he was willing to die for what he believed, and what it was like to be incarcerated for over 20 years. None of them regret what they did and they would all do it over again.

The legal insight is equally compelling. Bizos and Joffe sit side-by-side as they debrief the pressure put on them to not work on the trial, media coverage that rejuvenated their optimism, and how they looked up to Bram Fischer as a selfless leader. The whole legal team relied on one another, and their remarkable victory, life-sentences in place of death sentences, changed the course of South Africa’s history.

“The thing that jumps out to me are the individual stories. It is the individuals who each in their own way (believed) their lives, as Joel Joffe put it, were of secondary importance,” explained Stadlen. He made this film specifically thinking about the young people of South Africa.

“Schoolchildren like heroes,” he said, and now he wants to bring the story of these real-life heroes to schools across the country. “The thing I want for it most is to be seen by as many young people in South Africa as possible.”

This is Stadlen’s first foray into film making, and while he is not trained as a film maker, he felt drawn to this project by the story itself. “I was in South Africa when Nelson Mandela died,” he recounted, and inspired by the media coverage of Mandela and those who knew him, he immediately set up an interview with Goldberg. The two spoke for five hours and following their conversation, Goldberg connected Stadlen with Kathrada and Mlangeni. That is how the story was given life.

Right now, Stadlen has plans to take the film to Nelson Mandela University in Port Elizabeth, Fort Hare at the Steve Biko Centre in East London, and University of the Free State in Bloemfontein.

“But I also hope that steps will be taken to make it available to schoolchildren throughout South Africa,” Stadlen posited. “I have to have discussions with the Department of Education to discuss ways to see (how to make that) possible.” DM

The film will be screened by Encounters on Thursday and Friday in Johannesburg, and have its final festival showing on Sunday in Cape Town.

This article has been amended. An earlier version implied that the titular “Life is Wonderful” quote first came from a scene in the documentary, not during the initial Rivonia Trial.