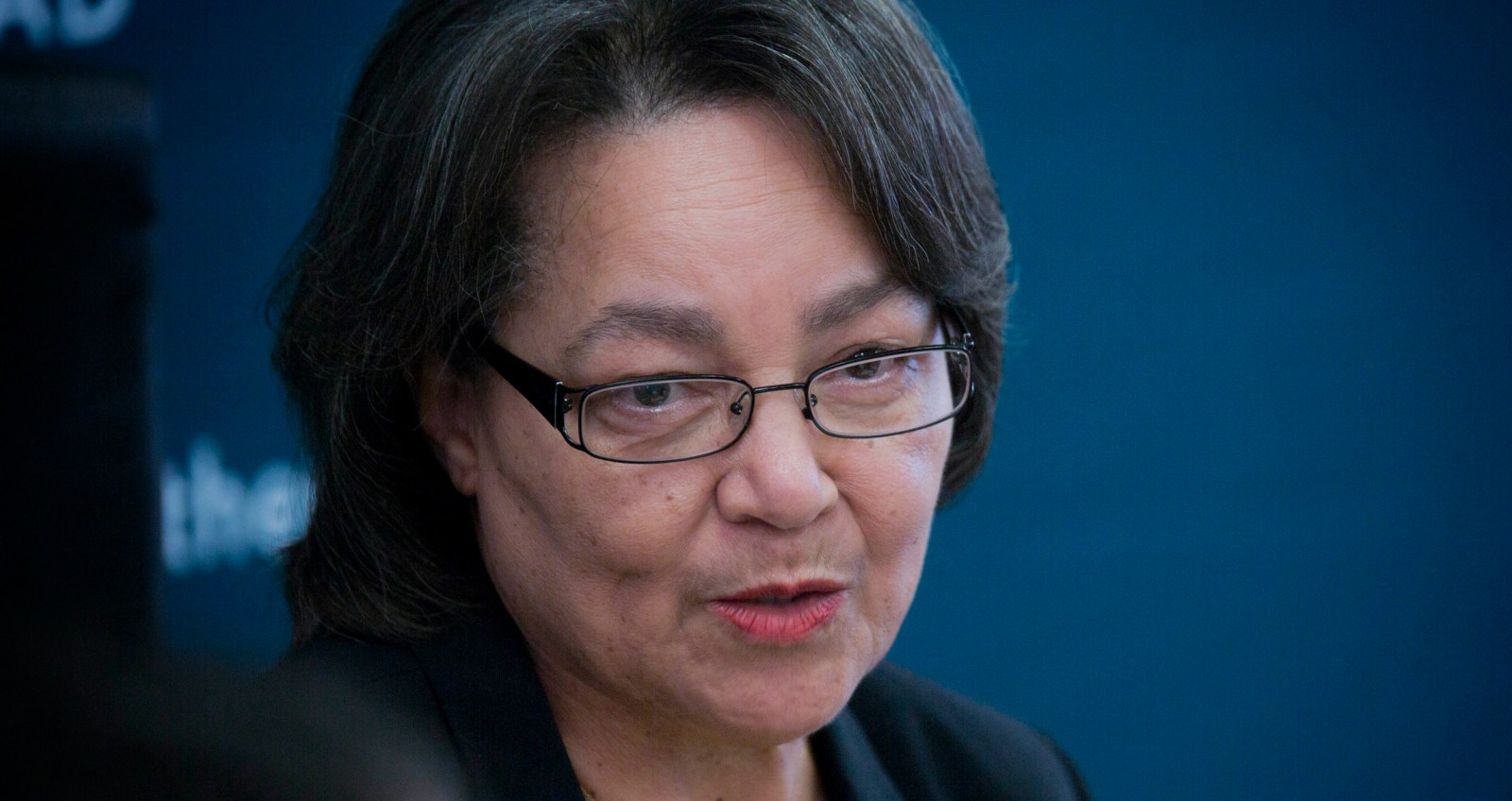 Cape Town Mayor Patricia de Lille is back in court this week to challenge the Democratic Alliance’s ruling that De Lille effectively fired herself from her position when she stated her intention to resign in a radio interview. On Monday, the mayor’s lawyers argued that the political party acted contrary to the Constitution, the principles of good faith and fairness – and even Ubuntu – by ousting De Lille in this manner.

Though Cape Town Mayor Patricia de Lille’s previous court appearances have seen her supporters gather in numbers outside the Western Cape High Court, on Monday morning all was quiet. Neither were any DA supporters visibly present.

Inside the courtroom, only a handful of spectators had turned out to view events from the public gallery. One wore a Pan Africanist Congress T-shirt – a throwback to De Lille’s political history as a leader of that party, in the years when any relationship with the DA would have seemed unthinkable.

That relationship took centre stage once more, as De Lille’s lawyer Dali Mpofu told a full bench of the court that the conduct of the DA in dealing with the mayor had been premised on “bad faith” and “offends some of the broad-brush values that should characterise our dispensation”.

In seeking to remove De Lille from her position as mayor, Mpofu said, the DA had two options: to take a lawful route, or an unlawful route.

The lawful route would have seen De Lille ousted by means of a vote of no confidence by the Cape Town City Council, or by being found guilty by the DA’s own disciplinary processes and dismissed.

“These two lawful methods have actually been tried and they both have failed,” Mpofu said.

It was after that, he contended, that “some wise person in the DA found yet another shortcut”.

Mpofu was here referring sarcastically to the DA’s decision to invoke a clause in its constitution which states that if a member says publicly that they intend to resign from the party, their membership automatically ceases.

De Lille’s legal team argues that this membership clause is inherently unconstitutional – because it limits DA members’ rights to freedom of expression, freedom of association, and their right to political participation in the party of their choice.

If the DA succeeded in removing De Lille by use of this clause, they argue, it will have a chilling effect on freedom of speech in future.

They also say that the way in which the DA applies this clause is inconsistent, irrational and discriminatory.

Both Mpofu and his colleague Johan de Waal pointed out that a number of other high-profile DA leaders have made statements to the effect that they would resign from the DA if X did or did not happen. Former spokesperson Phumzile van Damme, for instance, told a caucus meeting she would resign from the party if it did not engage the problem of white privilege.

Yet in such cases, the defence has been that this did not truly reflect an intention to resign, because it was expressed in a conditional manner.

De Lille’s lawyers argue that there is no real difference between those cases and what De Lille did, which was to tell a radio interview that she would “walk away” once her name had been cleared.

It was not clear, however, whether this line of argument was totally convincing to the three judges hearing the matter.

Judge Mark Sher suggested to Mpofu that the fact that the DA might apply the cause inconsistently did not have any bearing on whether the clause itself was irrational or unconstitutional.

Repeatedly, the judges asked Mpofu to clarify – in Judge Andre le Grange’s words – “what is so terrible” about the DA’s membership clause.

Mpofu argued in response that the clause was in violation not just of the Constitution, but of the DA’s stated core values, which include freedom, fairness and equality of opportunity.

If a DA member announced their intention to resign while sleepwalking, intoxicated or on drugs, Mpofu suggested, they could be dismissed by means of the clause.

“Clearly that would be offensive to the right of members to express themselves, and more importantly to remain in the party of their choice,” Mpofu said.

But the judges had other questions, too. For one: why would De Lille want to resign as mayor as soon as her name is cleared – as she claims?

“My Lord, I don’t know. She’s not charged with stupidity,” responded Mpofu.

“I’m struggling to understand the need to remain inside the party to clear one’s name,” said Judge Sher, expressing confusion as to why De Lille did not simply fight her reputational battle from outside the DA.

The DA’s decision to oust De Lille in this manner automatically meant that disciplinary processes against her could not continue, and therefore she could never be found guilty of misconduct, said Sher.

For De Lille to accept that her relationship with the DA was over, said Sher, would be “one of the cleanest ways of clearing [her] name”.

In response to this suggestion, De Lille shook her head vehemently.

Mpofu acknowledged the merit in Sher’s words, but said that it was unrealistic to think that the public would not assume De Lille was guilty of something if she failed to challenge her ousting.

Mpofu’s colleague De Waal argued in addition that the processes used by the DA to remove De Lille were deficient in other respects.

In particular, he contended that the minutes of the DA’s federal executive meeting revealed that members were not given enough time or opportunity to debate federal executive chair James Selfe’s contention that De Lille had delivered her resignation through her own words.

The meeting, said De Waal, was a “rubber-stamping exercise” rather than a truly democratic engagement.

He also questioned whether Selfe and four other leaders had recused themselves from discussing the De Lille matter as claimed.

De Lille had requested that leaders including Selfe, DA leader Mmusi Maimane and deputy federal executive chair Natasha Mazzone recuse themselves from debating her fate due to bias. Mazzone subsequently told a press conference that the five had indeed recused themselves – but De Lille’s lawyers are now questioning whether this happened, on the basis of meeting records.

Amid the legal to-and-fro between lawyers and judges, there was also some political banter – including a joke about the possibility of Maimane one day becoming the leader of the Economic Freedom Fighters.

On Tuesday, after arguments from De Lille’s corner wrap up, advocate Sean Rosenberg will be tasked with defending the DA’s handling of De Lille’s exit. DM