Trump the elephant in the room as foreign ministers meet 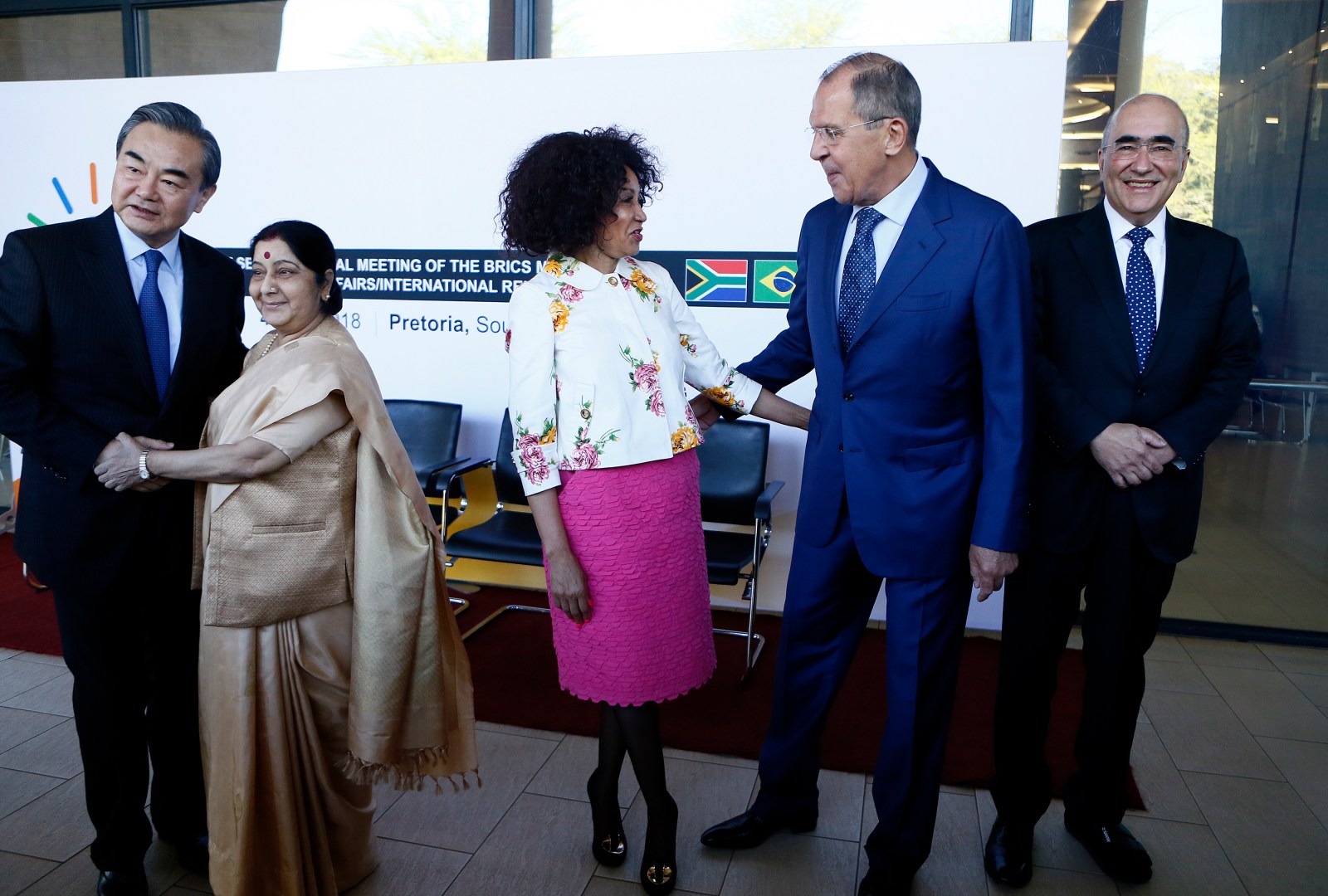 The foreign ministers of SA, Russia, China, India and Brazil decried the rise of nationalism and protectionism in the world.

US President Donald Trump seemed to be the elephant in the room when the foreign ministers of the five BRICS (Brazil, Russia, India, China and SA) countries were meeting in Pretoria on Monday. They said they were meeting to affirm the importance of multinational solutions to global problems, at a time of growing nationalism, populism and trade protectionism in the world.

Trump is perhaps the prime architect of these trends though of course he is not the only one. The large new tariffs he has slapped on steel and aluminium imports, in particularly, are sparking a global trade war. He has also pulled the US out of the Paris climate accord and the deal struck by the US under his predecessor Barack Obama, with European powers and Iran to curb its nuclear weapons development.

Trump was not mentioned by name, at least in the public remarks by the BRICS ministers at the start of the meeting. But he was strongly implied.

The BRICS meeting in Pretoria is intended to prepare the agenda of a full summit in Johannesburg next month of the leaders of the five member states, South Africa, Brazil, Russia, China and India.

It will be the second BRICS summit hosted by South Africa which is chairing the body this year. Pretoria has launched initiatives on countering terrorism, co-operating in peacekeeping, joint production of vaccines and exploiting the fourth industrial revolution, as its contribution, as this year’s chair of the forum of major emerging nations.

South Africa’s Minister of International Relations and Co-operation Lindiwe Sisulu, who is chairing the meeting, noted that BRICS was happily starting the second decade of its existence in the centenary of former President Nelson Mandela’s birth.

“The current global geo-political realities make a meeting of this nature not only necessary but timely,” she said. “We meet in the face of multilateralism under siege: when the integrity of international agreements can be hastily and expediently compromised: when more and more countries take an inward-looking position at the expense of others.

“South Africa remains deeply committed to multilateral diplomacy, in principle and in our demonstrable actions- and we hold true to this stance in the United Nations system; in our regional interactions; and in particular through our close collaboration in BRICS.”

Sisulu added that BRICS was meeting at a time of seismic changes in the world, including the strife in Turkey, migration to Europe, the intensification of the conflict between Israel and Palestine and “the re-emergence of national protectionism that threatens multilateralism”.

She stressed that South Africa represented the interests of Africa in BRICS.

Russian Foreign Minister Sergey Lavrov said BRICS tried to build trust and predictability in the world, to seek solutions which “de-ideologised” global problems such as terrorism, drug-trafficking and climate change.

BRICS believed in sticking to the UN Charter, in avoiding unilateral interference in the internal affairs of nations and in seeking diplomatic and political rather than military solutions to global problems.

Chinese Foreign Minister Wang Li agreed that BRICS was more important than ever now to counter unilateralism- which he characterised as “the law of the jungle” which he said was growing in the world.

Brazilian vice foreign minister Marcos Galvão said BRICS was a coalition to help equip global governance institutions with the means to deal with global issues. He said that the aim of BRICS was not to compete with other international government institutions but to complement them and make them more representative.

Some critics had said that the BRICS members were too diverse to transform political discourse into concrete policy-making. On the contrary, he said, BRICS allowed common problems to be approached from several different angles.

Indian Foreign Minister Sushma Swaraj said the BRICS member states must consolidate the functioning of its New Development Bank and its contingency arrangement for providing each other with balance of payments support in their own currencies, where this was required.

Sthe Mabanga, executive chairman of the Johannesburg-based BRICS Journal, said he believed the July summit would discuss, among many other issues, the sanctions imposed by Western nations against Russia for its military invasion and occupation of Crime.

Mabanga thought the leaders would look for ways of navigating around the sanctions to prevent other BRICS nations being damaged by them.

BRICS has several other issues on its agenda, including cyber-security, energy security, co-operation in tourism, forging a science-park network, countering money laundering and furthering the UN’s Agenda 2030 through the Sustainable Development Goals.

Security issues clearly loom large, judging by the remarks of Swaraj and others. Officials said the national security advisers of the five member states would meet towards the end of the month, probably in Durban, also to prepare for the summit from 25-27 July.

Lavrov met President Cyril Ramaphosa separately on Sunday and was due to hold a bilateral meeting with Sisulu on Monday afternoon.DM