Another attempt to push the new nuclear build programme? 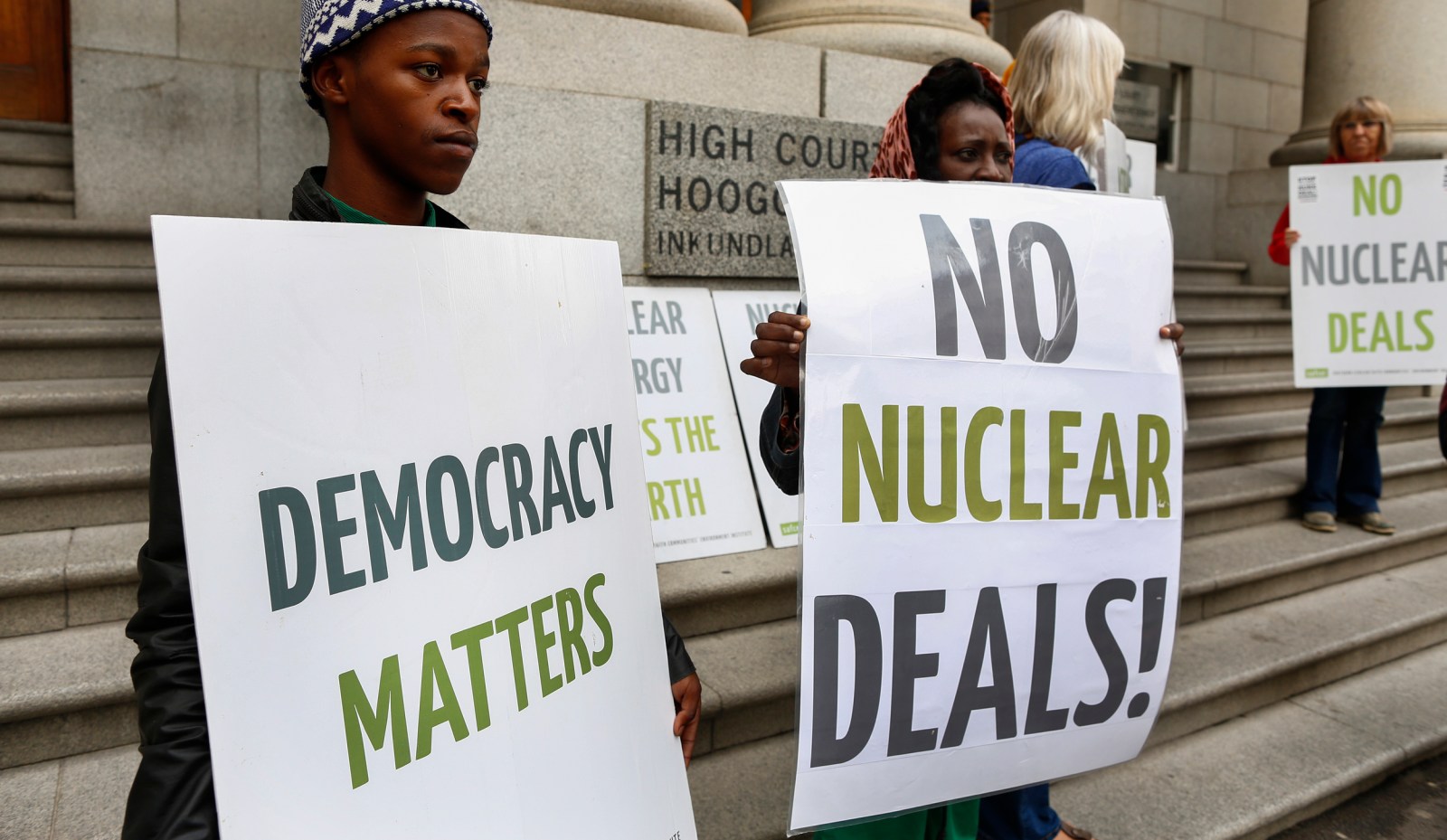 Members of Earthlife Africa and the Southern African Faith Communities Environment Institute and other organisations protest outside the Western Cape High Court ahead of the ruling against governments proposed nuclear deal in Cape Town, South Africa, 26 April 2017. EPA/NIC BOTHMA

The draft Integrated Planning Framework Bill could be the latest worrying development in the relentless bid to push the new nuclear build programme forward.

On Monday, 4 June 2018, comments from the public on the draft Integrated Planning Framework Bill are due to the Department of Performance Monitoring and Evaluation (DPME) in the Presidency.

The call for comments makes the draft bill sound fairly benign, in that the DPME says the bill will provide for the functions of the department and establish an institutional framework for “a new predictable planning paradigm and discipline within and across all spheres of government”.

However, upon analysis, the bill could be the latest worrying development in the relentless bid to push the new-nuclear build programme forward.

On 17 May 2018, Loyiso Tyabashe, senior manager of nuclear new build at Eskom, said at African Utility Week that Eskom is continuing with front-end planning for a nuclear build programme. This despite Cyril Ramaphosa sending clear signals at the World Economic Forum in Davos in January that South Africa does not have money to pursue a major nuclear plant build.

Within this context, consider the following lines contained in the draft integrated planning framework bill, which says that the Minister in the Presidency must:

(c) annually in consultation with the Minister of Finance develop a budget prioritisation framework in order to guide the allocation of resources to organs of state in the national sphere of government;

Nkosazana Dlamini Zuma is Minister in The Presidency responsible for Planning, Monitoring and Evaluation. This bill would give the minister the ability to develop a budget prioritisation framework that outlines which capital programmes to prioritise and to propose the related expenditure. Capital projects could include such contentious projects as the nuclear build, the Moloto Rail and the Mzimvubu dam.

In February 2018, which is after Cyril Ramaphosa signalled at the World Economic Forum that South Africa has no money for major nuclear expansion, the DPME launched a discussion paper on energy. The DPME’s website notes that enquiries related to this discussion paper could be directed to Tshediso Matona.

Tshediso Matona is the Secretary for National Planning at the DPME and is also the fired former Eskom boss to whom former President Jacob Zuma apologised about the way he was treated when he was fired.

The discussion paper reiterates that “the promulgated IRP 2010-2030 included 9.6 GW of nuclear power generation capacity, which has been confirmed as existing policy on numerous occasions. The Draft IRP 2016 that is in the public domain for consultation following a significant time-lapse since the promulgation of the IRP 2010-2030 in 2011 has a Base Case that requires nuclear power by 2037 (earliest) while a Carbon Budget scenario requires it by 2026.”

The discussion paper does acknowledge that the court case in which the Inter-Governmental Agreements (IGAs) with the United States of America, the Republic of Korea and the Russian Federation were legally challenged, determined the IGAs to be irrational, unlawful and unconstitutional. The court ruled that they should be set aside.

So, if a smaller nuclear build at an appropriate realistic cost could be possible, should taxpayers be worried? According to two recently released reports by the World Wide Fund for Nature (WWF), there is cause for concern. The WWF reports look at the players’ potential strategies for pushing the nuclear new-build programme as well as the domestic procurement and public finance implications. WWF cautions that suggestions for smaller amounts of installed nuclear capacity appear to be an attempt to gain support for smaller amounts of nuclear energy and use these as a stepping stone towards building the full 9.6 GW.

How might the Integrated Planning Framework Bill play a role in the continued push for nuclear? If the bill is legislated it would give the Minister in the Presidency responsible for Planning, Monitoring and Evaluation the ability to give input to the Minister of Finance on proposed capital and development projects and programmes and related expenditure. The financing would need to come from somewhere.

However, says the WWF, it is unlikely that corporate finance would be used; government-to-government loans or financing from state banks or development finance institutions of the vendor’s home country are more likely to be used, with sovereign wealth funds another possibility. In order to enable a loan, National Treasury may need to put up a loan guarantee. Given the alarming trend of State-owned Entities including Eskom needing bailouts, the possibility of the loan being called in would be a risk. The ratings downgrade that Eskom received would also mean that a loan, if it were granted to Eskom, would attract a higher interest rate than previously.

The draft Integrated Planning Framework bill is currently in white paper form. When it comes before Parliament, there is a strong rationale for civil society to study it closely and make submissions to ensure that it is not used as a tool to push corrupt capital projects through the system. DM