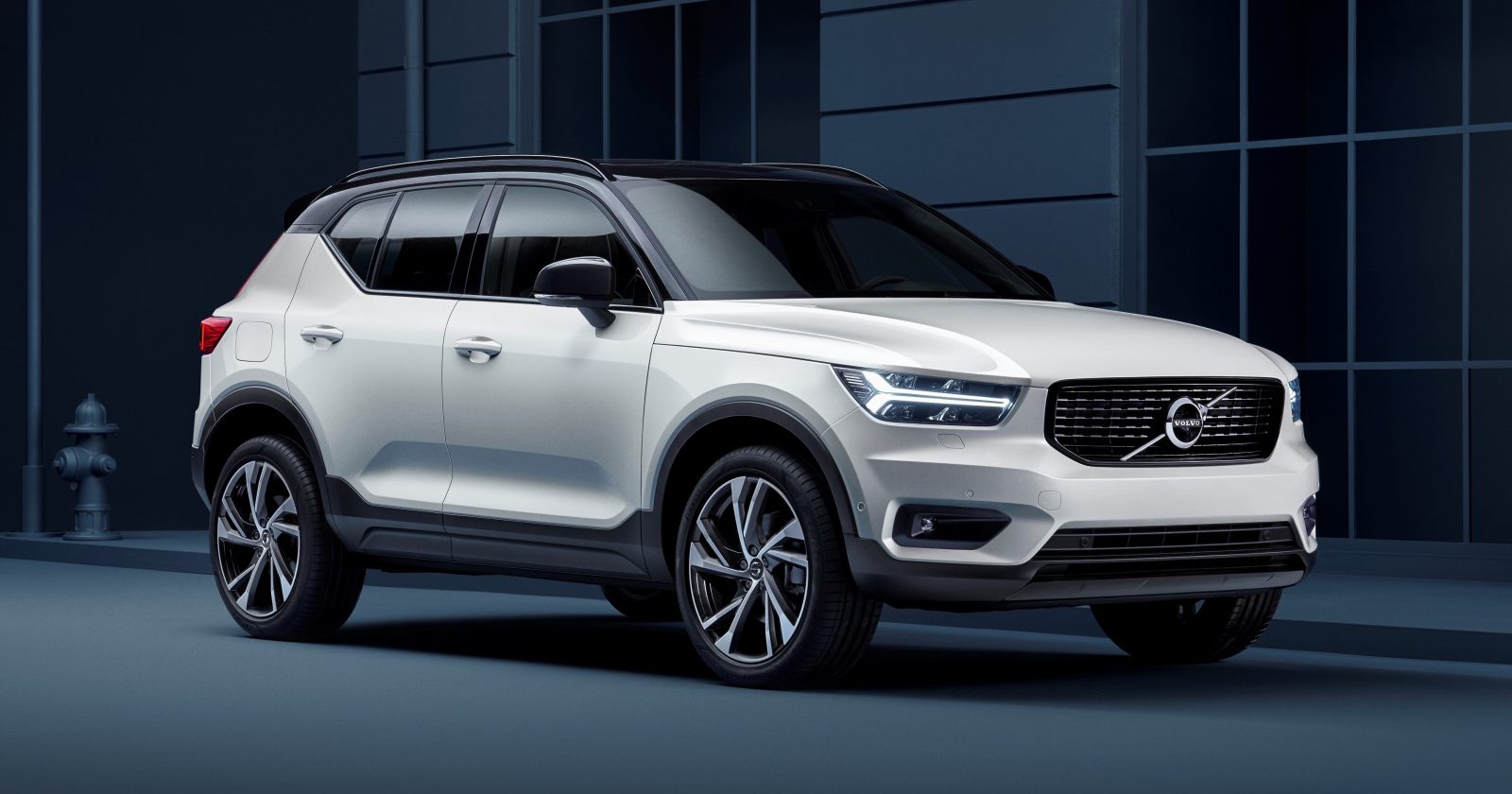 If ever there was a car capable of propelling Volvo from being an alternative, left-of-centre brand into the premium mainstream, it’s the new XC40. Linking chunky, arresting styling and head-turning presence to a designer interior and sure-footed dynamics, the XC40 should have its rivals worried.

Volvo must be well pleased with the new XC40. The Swedish marque’s first ever compact SUV has hit the sales sweet spot, with demand outstripping supply to the extent more production capacity is being implemented in both Europe and China.

The sales impetus has been further fuelled by a global appetite for SUVs – and compact SUVs in particular – together with a relatively limited choice in the premium category. For a time, Audi’s pioneering Q3 was the only real player, with more recent arrivals such as the Mercedes-Benz GLA, BMW X2 and Jaguar E-Pace at last offering some alternatives.

The XC40 strides into this premium compact SUV ring with the European Car Of The Year title already strapped around its muscular rump. It’s unmistakably Volvo, exuding a stylistic sense of purpose sometimes missing from its brethren.

The high waistline, broad C-pillar, flat bonnet and upright grille find an unexpected aesthetic harmony, while retaining some Volvo hallmarks, such as the curved shape of the tall taillight clusters and the T-shaped signature of the front LED headlights.

The XC40 looks bigger and bolder than expected. There’s nothing shy nor diminutive about its styling, while the contrasting roof and grille of the R-Design package as tested here add further visual interest.

That even the test car’s 20-inch wheels look relatively modest gives some indication of the XC40’s presence. It might be compact by SUV standards, but it doesn’t look compact. Aggressive, yes – and assertive.

The example under the spotlight here matches Volvo’s D4 turbodiesel drivetrain to the top-flight R-Design execution, which means it gets just about all the nice bits inside and out. Lesser, more affordable versions won’t have quite the same level of accoutrements, but still qualify for premium status.

No XC40 looks quite as boldly self-assured as the R-Design version, thanks to the enlarged front air intakes, the neat rear diffuser with its tucked-away exhausts, the gloss-black grille, and the two-tone colour treatment.

Those 20-inch wheels are extra (as if the 19s standard on the R-Design aren’t big enough), but the gloss-black detailing on the front scuff plate and elsewhere is included. All of which suggests that the R-Design is more suited to the urban jungle than any real off-road terrain.

Okay, so the lava orange hue is an option, but don’t just discard the notion: it actually suits the youthful exuberance of the XC40. My concerns would be more practical than aesthetic – that colour might show up grubby marks more succinctly than plain old dark grey …

The cabin layout is blissfully simple and approachable. In front of the driver, a TFT display lights up to show virtual dials and information on start-up. What’s displayed, and how it looks, is user-configurable. And it’s standard across the range.

The primary display is partnered by another, portrait-orientated display in the centre stack. This is the heart of the Sensus infotainment system, which encompasses audio, media connectivity, climate control, telephony and (optional) satellite navigation.

The display looks and operates much like a tablet: you swipe between virtual pages populated with icons to access, control and adjust functions. As infotainment systems go, this is about as minimalist and intuitive as it gets.

Any doubt about the XC40’s premium credentials are quickly dispelled by the tactile quality of the execution. Everything fits perfectly, looks smart and feels solid. The steering wheel offers controls for audio, telephony and cruise control.

Most of all, this is a stylish and uncluttered space, where no one needs to feel overwhelmed by the considerable tech involved to make it all operate seamlessly.

As for space, the XC40’s interior feels like the cabin of something bigger – and that’s especially true at the rear, where occupants have loads of leg and headroom. But there’s a caveat: at 460 litres, the boot isn’t exactly capacious, and 72 litres of that is taken up by an underfloor compartment.

Of course, the split rear bench seat can be folded flat if more cargo space is required, offering a maximum capacity of 1,336 litres.

Volvo and safety have traditionally gone hand in hand, and the XC40 must be among the most comprehensively equipped in its league as far as safety is concerned. The array of safety-related features is extensive across the range.

Most of all, the XC40 is the kind of Volvo that begs to be driven – and in dynamic terms, this D4 model delivers on most expectations. With 140kW on tap to propel 1.7 tons of metal (on the heavy side for a compact SUV), there’s enough urge for brisk performance.

Assisting is the 400Nm of maximum torque, available from 1,750rpm, and gearing that suits the engine’s power and torque curves well. For those in even more of a hurry, a driving mode selector can be set to High Performance, which sharpens overall responses, including throttle action and brake feel.

But frankly, you won’t be buying the XC40 in D4 guise to burn rubber at traffic lights. The eight-gear transmission is slick enough to leave it to its own devices, while the gear ratio selection finds a good compromise between response and economical cruising.

Being the R-Design model, the chassis set-up is perhaps stiffer than the target market might expect, and indeed, the entire R-Design execution would be a better match for the 185kW T5 turbo petrol. I would guess that the midrange Inscription derivative linked to the D4 drivetrain would be one of the XC40’s sweet spot models.

That said, the D4 R-Design is quite capable of doing frisky with a capital F. Switch to manual mode, floor the throttle and use the shift paddles, and the result is quite engaging. The raised driving position means that you feel a little disconnected from the chassis, but the steering is nice and meaty and overall tractability is impressive.

All but the entry-level XC40 feature permanent all-wheel drive, which promises added traction and composure on less than ideal surfaces by prioritising those wheels with the best grip.

Head off the beaten track and the XC40’s 211mm ground clearance might prove useful, as will the aforementioned all-wheel drive, assisted by a dedicated off-road driving mode. But as I’ve said, this is a city slicker SUV and I wouldn’t venture too far from civilisation on the test car’s low-profile rubber.

As for fuel consumption, Volvo’s 5.1 litres/100km claim for the combined cycle seems a tough target to achieve in real-world conditions. Admittedly, I have a heavy right foot and like to drive with intent, but I only managed 10 litres/100km around town, and around 7 litres/100km on open roads. With some care, somewhere between 6 and 7 litres/100km should be feasible.

What I enjoyed most about the XC40 is the cohesiveness of the motoring experience it offers. It achieves a balance between comfort, style, individuality, ergonomics and dynamics that is hard to fault.

I could nitpick and moan about the boot size, the slight hesitation of initial turbo lag and a gearbox that could shift more snappily in performance mode. But none of those would be a deal breaker, and the XC40 deserves its accolades.

As for pricing, a baseline, manual-gearbox XC40 in 115kW turbo petrol guise sells for R486,500, which is keen by premium standards, especially since the list of standard gear is still pretty decent, even if you have to make do with front-wheel drive only.

As tested here, the XC40 D4 R-Design AWD requires an investment of R637,800, which is still quite a bit less than, say, the Jaguar E-Pace D180 HSE, which has less power and a similar level of kit, but costs about R130k more.

So, one could argue that value is also part of the XC40 deal, certainly in the context of the premium compact SUV arena it competes in.

In fact, Volvo’s biggest headache might well end up being how to meet the strong demand for the newcomer – not just here, but worldwide. And that should be good for trade-in values, too. DM

A convincing debut in one of the industry’s toughest segments. Impressive in every respect.

Too many derivatives to choose from.