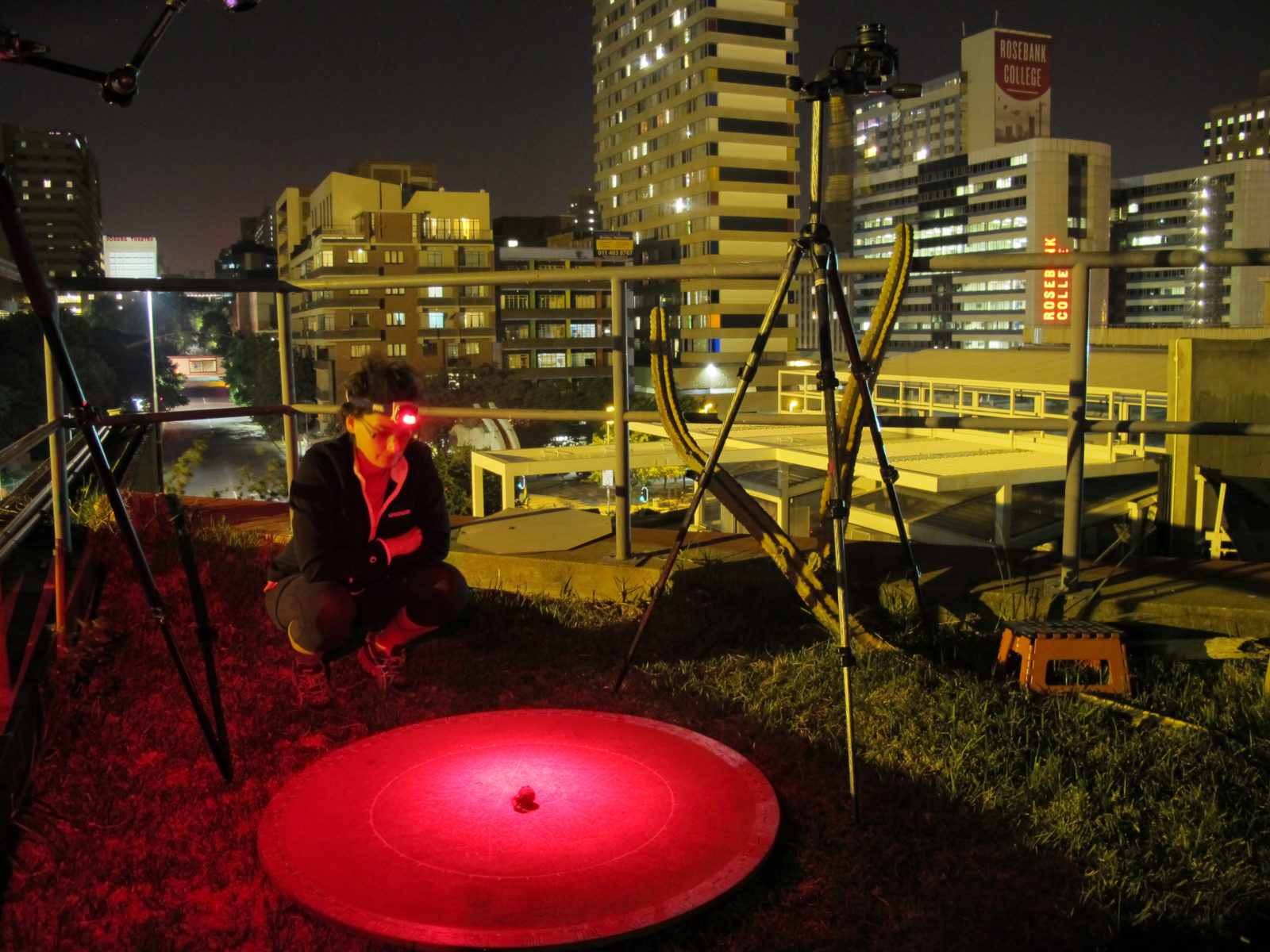 Dr Claudia Tocco of Wits University was involved with the experiment on the roof of the biology building at Wits that attempted to work out the effect light pollution has on dung beetles. Photo by Marcus Byrne

For years scientists have marvelled at how dung beetles can use the moon, the sun and even the splash of the Milky Way to orientate themselves and roll their poo balls in a straight line. An experiment in Johannesburg revealed that dung beetles, when they can’t see the stars or the moon, simply adapt.

The experiment was meant to scramble the navigational system of a brain the size of a pinhead.

For years scientists have marvelled at how dung beetles can use the moon, the sun and even the splash of the Milky Way to orientate themselves and roll their poo balls in a straight line.

They do it so they don’t lose direction and accidentally double back on the dung pile they have just left, where a bigger dung beetle might steal their ball.

In November 2017 scientists gathered on the roof of the biology building at Wits University to assess how the insect would cope in an environment where the glow of the city lights had drowned out the night sky.

On that same night near Bela Bela, in Limpopo, a second team of scientists performed the same experiment in parallel.

“We got on the phone and did it in exact tandem. It was a bit like James Bond with us synchronising our watches,” says Professor Marcus Byrne of the Wits School of Animal, Plant and Environmental Studies.

“We wanted to make sure that the only thing that was different was the light and what the beetles could see.”

The city dung beetles were given their poo balls and, under a light polluted sky, began rolling… in a straight line.

The experiment revealed that dung beetles, when they can’t see the stars, or the moon, simply adapt.

“The thing that surprised us was that they were equally well orientated in the middle of Johannesburg,” says James Foster, a postdoctoral fellow in functional zoology, Lund University, Sweden.

“We think that these beetles are using street lamps and the lights on top of buildings.”

It was a bit of an anti-climax.

“As scientists we are supposed to go into a scientific question with complete impartiality and have a hypothesis. But, of course, we will get much more attention if we are able to say that these animals that everybody thinks are so cute are now being confused by these evil lights,” says Byrne.

But, while the nocturnal dung beetle appears unperturbed by the nightly glow of the big city, scientists are increasingly worried about light pollution.

Satellite photographs are showing how a growing light stain is moving across our planet, at an alarming rate.

An organisation called the International Dark Skies Association works at highlighting the growing problem of global light pollution. In 2017 the organisation reported that five years of satellite images revealed that light pollution is growing at a rate of 2% per annum, in both the amount of the globe that is lit and the radiance of light.

“The introduction of artificial light probably represents the most drastic change human beings have made to their environment.”

The problem is that no one really knows how this is affecting insects and birds, who use the night sky to guide them on their migrations.

“We just don’t know and it is a very difficult question to answer,” Byrne says.

There are troubling indications that something is killing off insects.

“In a German national park they had a decline in insect diversity by 80%, so insects are under pressure and we don’t know why, it could be these neonicotinoids, the insecticides that have just been banned by the European Union, or it could be light pollution, or it could be something we haven’t even thought of yet,” adds Byrne.

In Sweden, experiments have shown how released migratory birds flew directly west towards the city of Falsterbo, before correcting their course and flying south. The belief is that the birds were able to correct their bearing once they could see the stars and the night sky.

Tracking the effect light pollution has on insects is difficult. GPSs are still too big to be strapped on to the thoraxes of butterflies. Also, many of these migrations happen at night.

But researchers have found a possible way to work out how light pollution might influence an insect.

In the United States, monarch butterflies migrate from the northern and central parts of the country during late summer and early autumn and head to Florida and Mexico.

Academics have been able to work out how the butterfly responds to light stimuli, by attaching an electrode to the butterfly’s brain.

It is a technique a researcher at Lund University is planning to use to study the Australian Bogong moth, another long distance migrant.

“One of the Lund guys, Eric Warrant, is working on this and if he gets this technique working – where you can look into the brain of the animal while it is flying in a tethered position and give it different light stimuli – then he may well be able to answer that question. Is this poor animal completely messed up by light?” says Byrne.

But the nocturnal dung beetle that appears indifferent to Joburg’s washed-out city skies might still be helpful in understanding the effects of light pollution on insects. And scientists won’t need to insert electrodes into its brain either.

Byrne is planning further experiments that might just scramble the dung beetle’s sense of direction.

The reason why the dung beetle is the insect of choice when it comes to research about orientation, says Byrne, is that it simply just does its thing.

“You don’t have to motivate these animals. That animal will roll its ball in the nuclear holocaust. And that makes it a perfect animal to ask simple straightforward questions like ‘does this light disturb your normal behaviour’.”

The plan is to place the dung beetle in area of Johannesburg that experiences high levels of light pollution and where there are no individual light sources that the insect can lock on to.

“You have this red glow across the horizon which is Johannesburg, and we believe that this may well cause an orientation problem,” says Byrne. DM