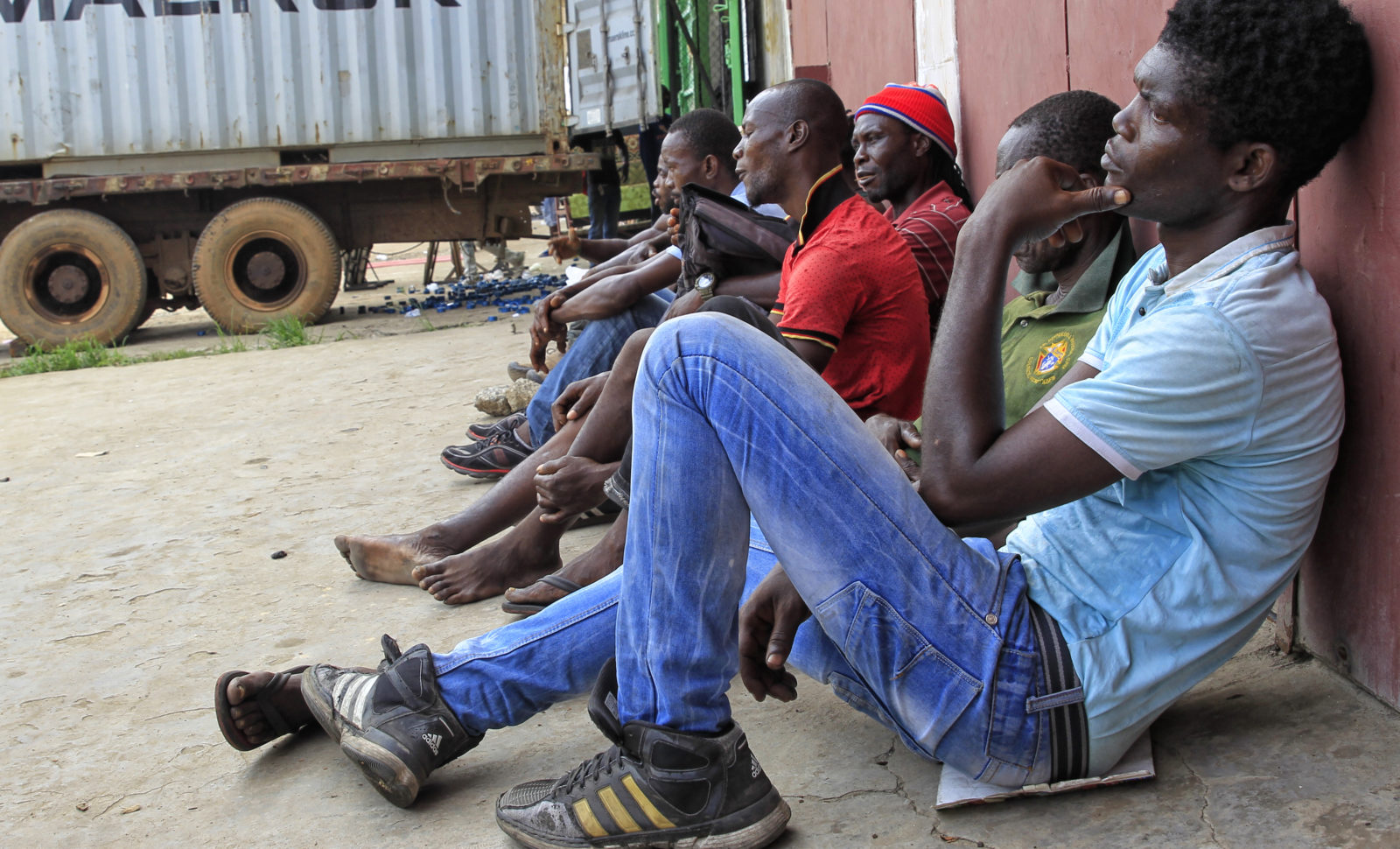 A photograph made available on 10 March 2017 showing unemployed Liberian men sit in front of a store to seek daily labour at the industrial district of Bushrod Island, Monrovia, Liberia, 09 March 2017. EPA/AHMED JALLANZO

It is imperative that Africa shifts from a poverty reduction mindset (move away from development aid) to a job creation mindset to accelerate its industrialisation.

We have been celebrating African Liberation Day for more than a half-century without concrete achievements towards our liberation. African leaders must understand that time for business as usual is over.

It has become critical to match the continent’s growing population and youth unemployment. Africa has seen the highest rate of population growth. This growth has been about 2.5% annually over the last five years and by 2050 a quarter of the world’s population will be on the continent.

Africa’s population is projected to have over 840 million youth by 2050 and will be the continent with the youngest population on earth based on data from United Nations Population Division. (World Population Prospects: the 2015 Revision)

The main challenge is how to respond to the growing bulge of African working-age population or tap into that growing working population. According to the International Monetary Fund (IMF) projection from 2010-2020, only three million formal jobs are created each year for 10 to 12 million youth entering the job market across the continent, a situation corroborated with data from the International Labor Organisations (ILOs) showing that over the last 25 years, young people’s participation in the labour force has improved by, literally, zero percent.

The continent’s youth unemployment has become a major security threat and could provide the perfect basis for terrorism, socio-political unrest and threat to democratic institutions. In 2011, a survey conducted by the World Bank revealed that about 40% of those who join rebel movements say they are motivated by a lack of jobs.

The time to act is now and an effective panacea to that alarming situation is inclusive and sustainable industrial development buttressed by relevant policies such as the Africa Continental Free Trade Area, the Protocol on Free Movement and the Kigali Declaration, among others.

It has become essential that the continent invests in its dynamic and energetic youth through the provision of skills and knowledge to transition successfully from an import-dependent continent to a strong manufacturing base.

African countries must implement an effective and robust industrialisation framework to move from the current important-dependent economy. The continent cannot continue with an economic model based on Exploration, Extraction and Exportation (three ‘’E’’ economy model).

Over 80% of Africa’s exports are shipped overseas, mainly to the European Union (EU), China and the US. Intra-Africa trade accounts for some 10% to 12% of Africa’s total trade compared to about 60%, 40% and 30% intra-regional trade achieved by Europe, North America and ASEAN respectively, according to UN report.

The African Development Bank continues to reiterate that low manufacturing and processing capacity is a major limiting factor for trade among African countries. Intra-African trade in manufacturing declined from 18% in 2005 to about 15% between 2010 and 2015. A decisive move would be a shift from raw mineral resources to high-value semi-processed and processed exports through a commodity-based industrialisation process by adding value to domestic products.

It is also imperative that Africa shifts from a poverty reduction mindset (move away from development aid) to a job creation mindset to accelerate its industrialisation. The continent should and can finance its industrial development by curbing illicit financial flows. It is estimated that from 2005-2014, Togo and Liberia lost 94% and 83% (respectively) of their total trade to illicit flows.

The Africa we have cannot become the Africa we want unless the leaks attributed to illicit financial flows are curbed. The Africa we want should capitalise on its natural endowment to develop its industry and invest purposefully in its youth population. DM