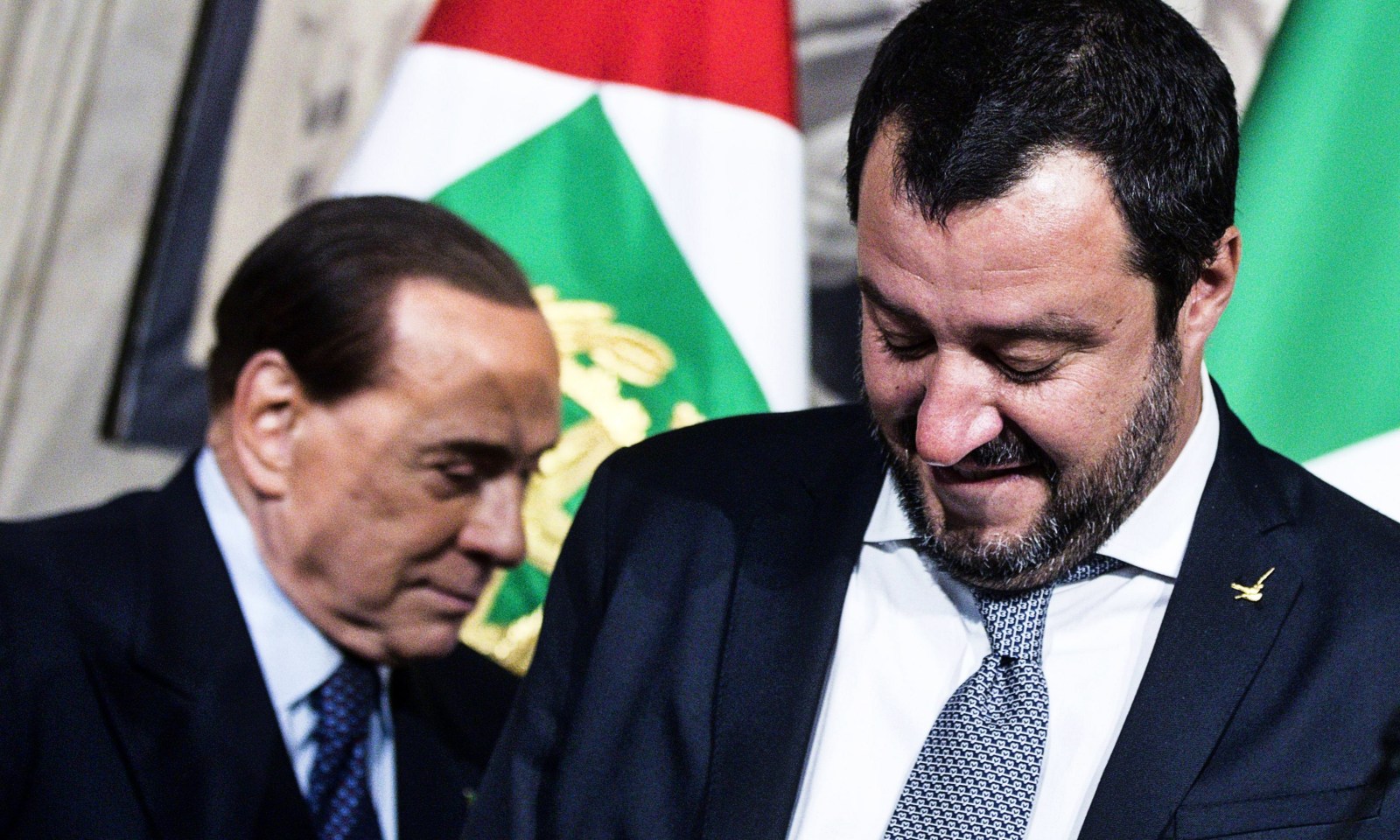 Leader of Lega party Matteo Salvini (R) with leader of Forza Italia party Silvio Berlusconi (L) adress the media after a meeting with Italian President Sergio Mattarella at the Quirinal Palace for the third round of formal political consultations following the general elections, in Rome, Italy, 07 May 2018. EPA-EFE/ANGELO CARCONI

More than two months after its general election Italy is finally about to have a new government. After weeks of negotiations and after all other political options were exhausted, a much-feared coalition between Italy’s leading populist parties has been formed.

The two parties competed separately in Italy’s 4 March general election. The Five Star Movement came out first with 33% of the vote and the League got 17% – a phenomenal growth from just 4% in the 2013 general election.

The coalition between the two is scaring European Union technocrats who don’t know what to expect. The programme the two put forward is a bizarre mix of neoliberal policies and social protectionism with some policies defying EU rules.

While the coalition is unlikely to push for Italy’s exit from the EU, it is likely to challenge Brussels’ economic and social policies and to normalise a dangerous form of populism and a dystopian social contract.

On the surface, the Five Star Movement and the League don’t have much in common. One was founded by an Italian comedian who talked of direct democracy, anti-corruption policies and a green economy. The other has its roots in a secessionist movement, calling for the wealthier north to separate from the “underdeveloped” south, and is currently pursuing an anti-migrant agenda.

In reality, the two parties have never been that different, and their recent convergence is not accidental. Both focused their election campaigns on the grievances of the ”white Italian majority” which is afraid of being sidelined by liberal elites and migrants and losing their middle-class privileges.

Both parties are supported by ecosystems of fake news, pushing anything from anti-Semitic and racist propaganda about George Soros to claims about the Obama administration plotting to smuggle migrants from Libya to Italy, or anti-vaccine conspiracies. The Five Star Movement has been particularly good at presenting sanitised messages in mainstream media while allowing their social media followers to spread hate, racism and fake news.

The two parties’ informal media networks are separate, but interconnected, and have links to far-right and pro-Russia propaganda sources in the West. Salvini has overt connections with international far-right players, including an official agreement with Russian President Vladimir Putin’s party and close ties with Marine Le Pen in France. He has also been endorsed by US President Donald Trump’s controversial former aide Steve Bannon.

The Five Star Movement and its leaders keep their ties to the global far right less apparent. In his influential blog, its founder, Beppe Grillo, has expressed sympathy for Trump and Hungary’s PM Viktor Orban, but other politicians associated with the party claim to be against racism and xenophobia.

In the European Parliament, the Five Star Movement MEPs sit in the same group as Britain’s far-right UKIP, Alternative for Germany, and Swedish Democrats, but they refused to form an alliance with Le Pen’s National Front.

The joint government programme the two parties released last week contains both neoliberal and protectionist policies. A 20% tax for high-income individuals and companies and a 15% flat tax for the rest is one of the proposals meant to deliver relief for ordinary Italians and small and medium enterprises (SMEs) who complain about hefty taxes.

The flat tax was part of Salvini’s electoral campaign, and it helped him cement the League’s dominance of the north, where the country’s most productive SMEs are located.

A basic income of 780 euros ($922) a month for unemployed Italians is also in the coalition’s programme. This was a key proposal of the Five Star Movement during the election and helped them succeed in the south, where high unemployment is the most pressing socio-economic problem.

The two parties plan to complement these measures with a reversal of recent pension reform and the reduction of the retirement age.

They also propose to make wide-ranging but unspecified “efficiency” cuts to finance their expansionary measures.

The two parties have also proposed some Eurosceptic policies. While they are not calling for Italy to leave the EU, their programme is an obvious challenge to EU rules.

The two parties have made it clear that the EU budget will have to conform to the principles of their programme, not the other way around. For example, they want the EU’s requirement for Italy to keep its public deficit under 3% to be reformed.

They are also likely to challenge some of the EU’s foreign policy stances. Their programme emphasises the primacy of the Nato alliance but also calls for the withdrawal of sanctions against Russia.

More importantly, the two parties have a clear anti-immigrant plan. They propose to create new detention centres across Italy where undocumented migrants are to be kept before deportation. They promise to shut down Roma settlements and mosques whenever they are deemed “illegal”. They also call for other EU states to take a bigger share of asylum seekers and the scrapping of the Dublin Regulation, which relegates responsibility for incoming migrants and refugees to EU border states.

‘A Europe of nations’

The approach of the Five Star Movement and the League to the EU is similar to the one the Greek party Syriza had before the 2015 bailout referendum.

Syriza, however, failed to challenge EU hegemony. They faced formidable opposition from Brussels, Germany and the IMF, but were also weakened by the internal contradictions of subscribing to a progressive agenda but adopting nationalist populist sentiments.

The League and the Five Star Movement will not face this challenge. Their anti-migrant nationalism is in the open and finds approval across Europe. Italian populists could be in the driving seat of a coherent reactionary pan-European alliance for a “Europe of nations”.

Regardless of whether their coalition survives or falls apart in a few months, the two parties have already won in Italy the kind of “cultural war” promoted globally by Steve Bannon.

They have established an ideological consensus across the political spectrum over the idea of an Italian nation that draws on our fascist and colonial past. Whether it will be this coalition, or a different one, that translates this fantasy into policy is unimportant. What is important is the alarming terms of the dystopian social contract that has gained popular acceptance. DM

Vito Laterza is a research fellow in the Department of Social Anthropology, University of Oslo, and a visiting researcher at the Centre for African Studies, University of Cape Town. From July 2018, he will be associate professor in development studies at the University of Agder, southern Norway. He is an anthropologist and analyst focusing on politics, economy and society in Africa and the West.