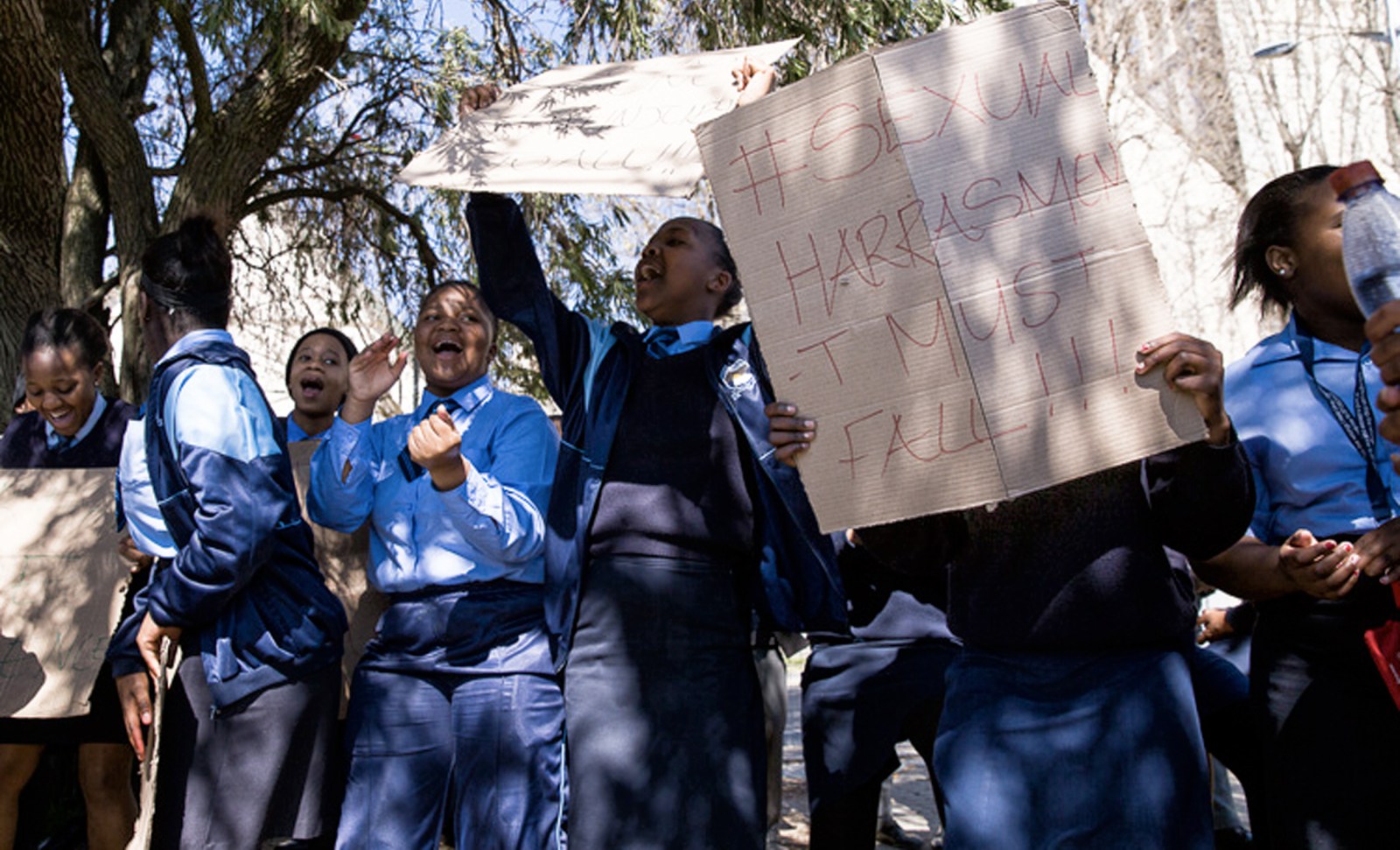 Thandokhulu students protest in 2017 against an alleged sexual assault by one of their teachers. Photo: Ashraf Hendricks

On Monday, Debbie Schäfer, the Western Cape Provincial Minister of Education, told Equal Education (EE) to suspend its programmes amid allegations of sexual misconduct between three of the organisation’s leaders and employees. Schäfer cited her concern for learners as the main driver for her request, especially for female learners.

For the past few months a teacher employed by the Western Cape Education Department (WCED) has been teaching at Thandokhulu High School, despite being on trial for sexually assaulting a learner. Also, a video shows the same teacher, Ayanda Ntuthu, beating a student with a belt.

Ntuthu was accused of touching a learner’s private parts. He was ordered not to have contact with any of the witnesses, but he still continued teaching at the school where some of the potential witnesses are learners.

The charges against Ntuthu were dropped on Tuesday due to procedural failures: the prosecutor could not locate the witnesses because the investigating officer had been on leave. The case had been postponed five times. Equal Education Law Centre (EELC) represented at least one of the witnesses.

Equal Education (which is not the same organisation as EELC) said it will continue to work with learners in the Western Cape despite Schäfer’s demand. EE’s press statement on Tuesday afternoon called Schäfer’s requests “premature and unreasonable” as it ignored the nature of the allegations, which did not include learners.

“While we are available to discuss these matters directly with MEC Schäfer, we reject the political opportunism of her media statement and will not cease our important work in the Western Cape,” said the press statement.

Schäfer requested that EE suspend its programmes at schools until the organisation could discuss the situation with her. EE responded that Schäfer could not “prevent learners engaging with any association or organisation after hours and outside of school premises”.

EE said that Schäfer had not ascertained the facts. None of the three members of EE accused of sexual misconduct — Tshepo Motsepe, Luyolo Mazwembe and Doron Isaacs — had regular, direct access to female learners in their positions.

Here is the response by Jessica Shelver, spokesperson for Schäfer:

“Employee Relations has no outstanding case against the alleged. The department received a complaint of improper conduct and assault against the alleged in March 2017. The matter was investigated but we could not find sufficient reliable evidence to charge said educator with improper conduct (sexual harassment). The alleged victim version was not substantiated by learners/educators that were consulted. A third learner who was willing to testify did not witness any sexual harassment.

“The department subsequently received a have new complaint of assault in August 2017, against the alleged of which he was charged. A plea bargain agreement was entered into for the assault charge and the sanction imposed was a final written warning and fine was issued on 23 October 2017.

“A department can also dictate if an organisation is allowed or not allowed in a school, especially when they are shrouded by such controversy that may have consequences on our learners.” DM