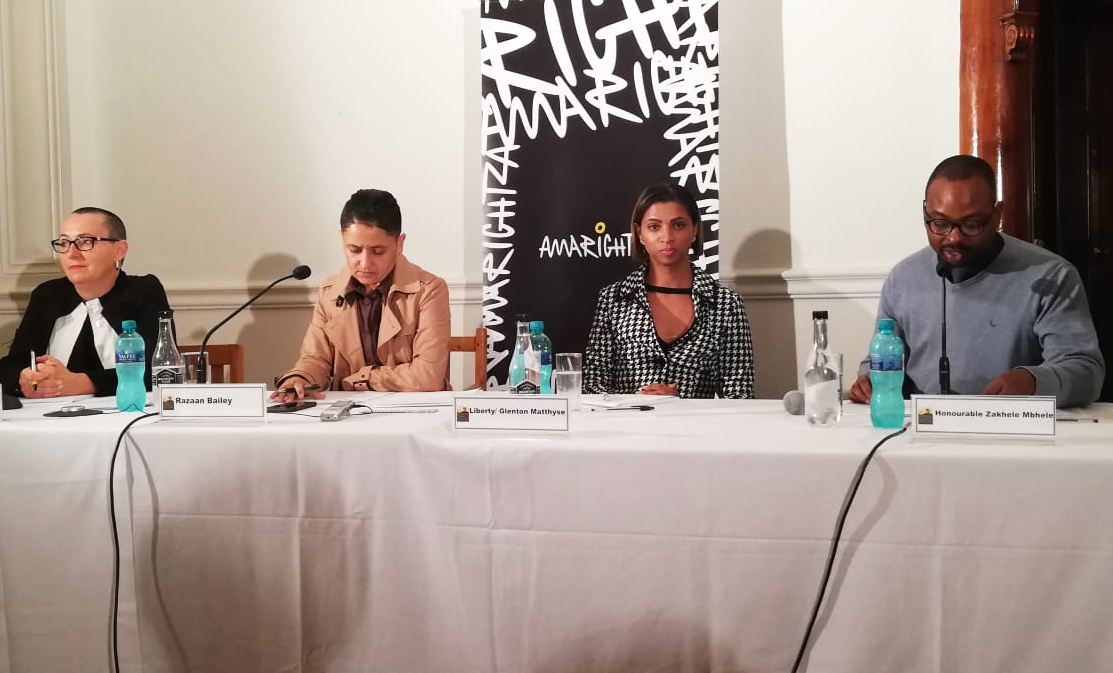 South Africa often boasts about having one of the best constitutions in the world, and indeed it does, however, what is on paper is not always reflected in practice. This is the case when it comes to Lesbian Gay Bisexual Transexual Intersex (LGBTI) issues.

“So much for human rights to self-identification and self-determination. We have a long way to go.”

This was the comment from Liberty Glenton Matthyse, who was participating in a panel discussion on transgender issues in South Africa.

The Centre of Conflict Resolution, Cape Town, collaborated with the Foundation of Human Rights to unpack LGBTI rights and how what is stipulated in the Constitution plays out in reality.

The discussion, chaired by Razaan Bailey, programme director of the Desmond & Leah Tutu legacy Foundation, included Matthyse, who is director of Gender DynamiX, an organisation solely focusing on the transgender community and Members of Parliament, Zakhele Mbhele of the DA (Democratic Alliance) and Deidre Carter of Cope (Congress of the People).

Commenting on the identification struggles faced by transgender people. Mattheyse said that although queer rights have been recognised, there has been silence on transgender issues.

“On paper, a law exists, enabling a transgender person or intersex persons to amend their gender marker, but you need medical reports, you need a medical buy in to say that you are actually the person that you are.”

Transgender people in South Africa have the right to alter their gender but need to provide medical proof of this for identification purposes.

“Four hundred and twenty-one public servants (who conduct civil marriages) are exempted from performing same-sex marriage,” said Carter. “This is just under half the total number of public servants who are hired to perform civil unions.”

Pointing out the hypocrisy, Carter said: “You cannot on one side, for publicity, say we are supporting Caster (Semenya), but on the other side you don’t want to acknowledge the rights that she has.”

The high number of department marriage officers who are exempted from officiating at same-sex marriages on the basis of religious belief or conscience was raised as evidence of the half-hearted commitment the state has to recognise and realise LGBTI rights.

Mbhele said politicians had a role to play in effecting real change. “We need systemically strengthened political will for politicians to do the right thing consistently and run government properly, which will only be possible when we achieve political realignment that results in stronger competition where voters consistently punish poor performance and reward good governance.”

Mbhele added: “We are long past a stage where we can shame a politician and government officials in the media to scare them into correcting their behaviour. They do not get embarrassed any more.”

In his closing statement, Mbhele said: “The only thing that politicians fear is the prospect of losing public office that gives access to state resources perks and benefits. It is the only thing they fear at this stage.”

Panellists appeared to agree that more needed to be done to protect LGBTI rights in South Africa and that needs to begin with amending certain parts of the Civil Union Act — one part being Section 6 of the act which has allowed government staff to discriminate against same-sex couples. DM