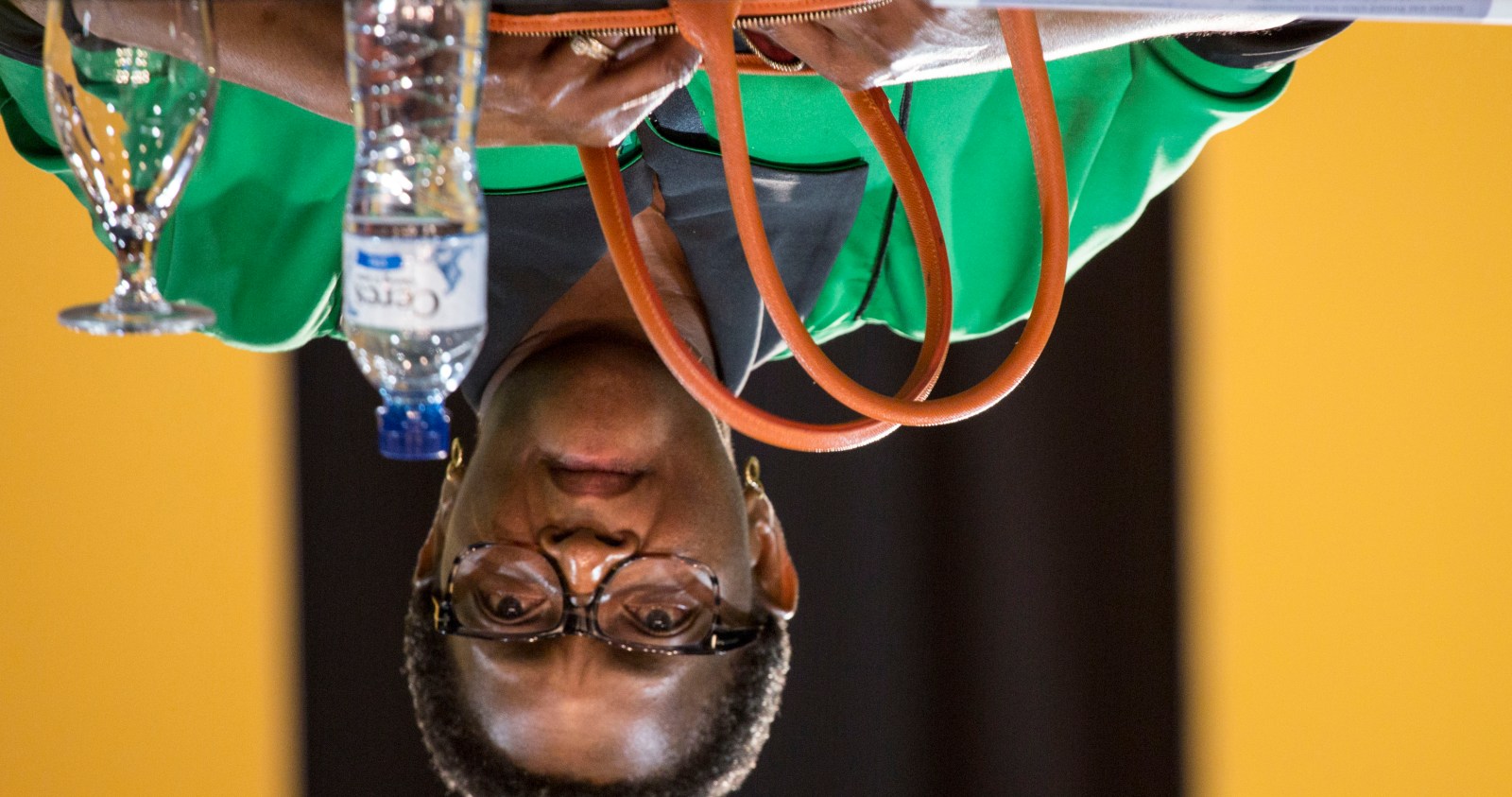 There’s a new Minister of Social Development and a new acting CEO of Sassa, but the R1.4-billion irregular and fruitless expenditure by the previous regime under Bathabile Dlamini’s political watch hovers like a torrid hangover. On Tuesday, further shocking revelations emerged of a last-minute R12-million (the amount of the R20-million signed off that was actually spent) procurement by former KZN-based acting Sassa CEO Pearl Bhengu, a week before the ANC’s highly contested elective conference in December.

Details of the scale of corruption in the South African Social Security Agency at Tuesday’s Scopa hearing conjured an image of a cow crossing a river being stripped to the bone by a ferocious school of hungry piranhas.

New Minister of Social Development, Susan Shabangu, new acting Sassa CEO Abraham Mahlangu and other senior officials reported back to Scopa on Sassa’s R1.4-billion in irregular, fruitless and wasteful expenditure, a matter that has continuously been sidelined for at least two years by the more pressing social grants crisis and various urgent court hearings. Also at the Scopa hearing were members of Treasury, the AG’s office and the Hawks.

Things got off to a lively start when Scopa learned that former acting CEO Pearl Bhengu (who did not attend Tuesday’s meeting due to apparent illness) had, in December 2017, about a week before the ANC’s elective conference at Nasrec, pushed through five contracts worth R20-million.

The request had come, DA MP Tim Brauteseth told members, in an email from a Mr AR Malope asking for five events to be run in KZN “to educate beneficiaries on the new grant system”. The events were billed at R4-million a pop and the request and agreement by Bhengu showed a remarkable amount of uncharacteristic foresight on the part of Sassa. The events would have taken place five months before there had been any requests for such “education meetings”.

The request had been sent on 4 December 2017 and had been signed off the next day by Bhengu despite Malope’s email being thin on detail apart from the venues of the meetings. In the end only three of the events had taken place.

The breakdown of the costs for only one of the events shows staggering numbers, interestingly all of them kept below the R500,000 threshold that would have required the contract to go through a tender process.

(As a comparison, Daily Maverick’s The Gathering, South Africa’s premier political conference, attracts on average around 1,000 attendees and speakers from all over the world, who are fully catered from 8am until 6pm. The Gathering is held in the country’s top convention spots – Sandton Convention Centre, CTICC and Vodaworld. Each and every one of these premier events costs but a fraction of what Sassa’s then CEO approved for any of the individual events in KZN. – Ed.)

It was Bhengu who signed off the request. On Tuesday new acting CEO, Abraham Mahlangu, told the committee that it was his predecessor who should account for the last-minute splurge, but that she had called in sick – without a doctor’s note.

Former Sassa KZN regional manager, Bhengu was brought in by former Minister Bathabile Dlamini as acting Sassa CEO when Thokozani Magwaza found himself jumping before he was pushed in July 2017. Magwaza signed a confidentiality agreement with regard to his sudden departure from the hot seat and in the middle of the brewing social grants crisis.

After Bhengu’s appointment, staff at Sassa had raised the alarm that Bathabile Dlamini’s daughter, Skhumbuzo Mazibuko, and Bhengu were co-directors of a company, Umnotho Wabafazi Biz, registered in July 2015. Bhengu is also known to be close to the former minister.

Minister Shabangu at the close of the over three-hour grilling told Scopa that she would be taking “necessary action” and that she would be investigating not only Bhengu “but other individuals that have been brought to my attention”.

Shabangu said Sassa was not a “failed institution” as DA MP David Ross had described it, but that it was “individuals” who had failed and that “we must deal with those individuals”.

Major-General Alfred Khana, head of the Hawks commercial crime unit, said the DPCI was not investigating Bhengu at this stage. The DPCI, he said, was investigating around 27 less “high profile” cases that had been highlighted by Sassa.

“But these cases pale into insignificance when you look at the vast amounts that have been mentioned today,” said Khana.

Major irregular expenditure items disclosed in 2016/17 included R60,266,627 spent on goods such as office furniture and promotional materials “that did not adhere to minimum thresholds prescribed for local content” as prescribed by National Treasury and the DTI; R23,437,569 spent on services procured where the supply chain process was not adhered to, “such as the procurement without necessary approval, expired tax certificate, goods received without an order being issued, goods procured on quotations instead of competitive bidding process”.

An irregular amount of R3,499,606 approved by former Sassa CEO Virginia Petersen was recorded for 2015/16. Petersen has been asked why she should not be held responsible for the amount forked out for protection services for Dlamini as well as her spokesperson Lumka Oliphant’s children.

It was Petersen, the Sunday Times found, who had hired former State Security Agency head Arthur Fraser’s company Resurgent Risk, established NIA DG Manala Manzini to conduct a conduct a threat assessment for Sassa for R2.5-million and devise risk mitigation strategies for R6-million. It was Resurgent that recommended that security company Vuco, appointed without a tender, provide security for Dlamini’s children.

Over and above all of this Sassa had spent around R24-million improving its local offices and pay-points without complying with the CIDB (Construction Industry Development Board) Act and R29-million for the irregular extension of leases for office accommodation which expired but was not extended or renewed on time.

Around R43-million had been spent on the Sassa workstream contract – Dlamini’s hand-picked structures which undermined the Sassa executive with regard to taking social grants in-house. Sassa, in March 2018, requested a condonation for this amount from Treasury and is awaiting reply.

With regard to the additional R316,447,361 Sassa had irregularly paid to CPS for the additional registration of beneficiaries, Sassa was awaiting the outcome of an appeal by CPS of a 23 March order to repay the money.

Treasury has also refused to condone an amount of R419,611,117 for the extension of physical security as requested by Sassa and the matter is now being investigated by SAPS.

Interventions currently in progress include a review of “all existing valid contracts to ensure with SCM prescripts to be concluded before 31 May 2018”.

The agency said it was also reviewing all existing contracts “to check compliance to SCM prescripts to resolve anomaly if found.”

New bids were being pre-audited before orders are issued and training was being provided to Sassa procurement structures. “Consequence management” would also be “elevated” and included as one of the priorities of the agency.

The DA’s Brauteseth asked Scopa chair, Themba Godi, to subpoena Bhengu to appear before Scopa to explain the irregular expenditure.

Meanwhile, it was revealed on Tuesday that Shabangu has cancelled a Sassa tender process to find a replacement for CPS for cash payments and would instead be setting up a technical committee to recommend alternatives to cash payments. DM